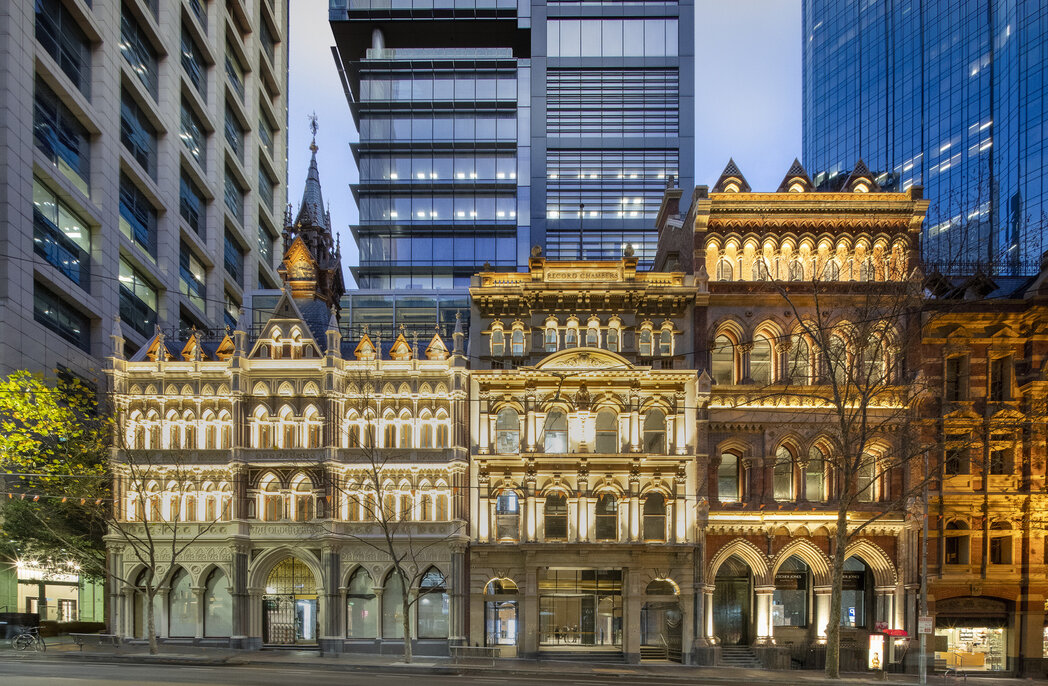 Seven Australian projects will be vying for top prizes when the World Architecture Festival opens in Lisbon, Spain, tomorrow.

For the second year, the world’s largest international architectural event will be live-streamed across three days between 1 and 3 December 2021.

Along with conference programmes, fringe events and talks by global architectural thinkers and industry personalities, the festival will feature presentations from all the shortlisted architects.

Postponed from 2020, the prestigious awards programme drew 732 entries from 55 countries. Nineteen category winners were announced last week with a further 14 announced in the second round.

These category winners will present their projects live to 18 trios of international juries during the festival. Up for grabs are World Building of the Year, Future Project of the Year, Interior of the Year and Landscape of the Year.

Below are the seven Australian category winners.

Set back from three heritage-listed buildings in Collins Street, Melbourne, this 40-storey office tower rises in a configuration of modules that express the internal organisation of the building.

The tenant-focused design incorporates a vertical village concept, with the tower split into three separate neighbourhoods that respond to specific tenant requirements, providing them with a unique identity within the overall building.

The new multipurpose outdoor arena in Sydney includes an operable facade to enclose the arena for the netball season, while providing an open, outdoor feel when raised in ‘tennis mode’.

The roof is an innovative cable-tension structure and PTFE fabric design, a first for stadia in Australia, designed by COX in collaboration with Arup and Fabritecture.

Set to be the tallest commercial hybrid timber tower in the world, this Sydney project is at the leading edge in its application of carbon sequestering mass-timber construction.

The new building will be home to a youth hostel currently on the site, new public access to a preserved historic train shed, ample civic space and amenities, select retail and thousands of technology workers when complete.

Read more about the Atlassian Headquarters.

Two architects were engaged to bring the visual arts and performing arts together in this Sydney project: John Wardle Architects designed the gallery in the east wing and Durbach Block Jaggers designed the performance space.

Inherently, both gallery and theatre need to be separated from the outside world to control light, humidity, temperature and acoustics. This allowed each architect to explore their own language of material and forms within their interior worlds.

As such, gallery and theatre are in perpetual dialogue through their function and their proximity.

Outside, a garden designed by 360 Degrees completes the project.

Nestled in the rural surrounds of Bruny Island, Tasmania, Coopworth is a contemporary interpretation of a country farmhouse.

The site’s inhabitants of Coopworth sheep, the wide-ranging views to the water and mountain ranges beyond, as well as the weathering red lead shacks dotted over the island provide an ever-changing landscape with which the house converses.

The footprint of the house is consciously constrained to maximise arable land yet maintains generosity in its thoughtful internal arrangement.

This scalloped residential development was influenced by its immediate context and inspired by the silos that once dominated Collingwood’s skyline.

At its base is the original brickwork of a 1920s Art Deco style brick warehouse. The existing brick walls are extended upon, thickened to frame new openings and stretched to encompass the full perimeter of the site.

By allowing the context to spark ideas for this project, this post-industrial suburb is re-imagined while remaining connected to its history.

COX worked closely with Queensland University of Technology to develop a design that would both accommodate and inspire an ambitious curriculum embedded in project-based learning.

At the last World Architecture Festival in 2019, Civic architects, Braaksma & Roos Architectenbureau and Inside Outside / Petra Blaisse’s LocHal Public Library took out the top prize for Building of the Year.