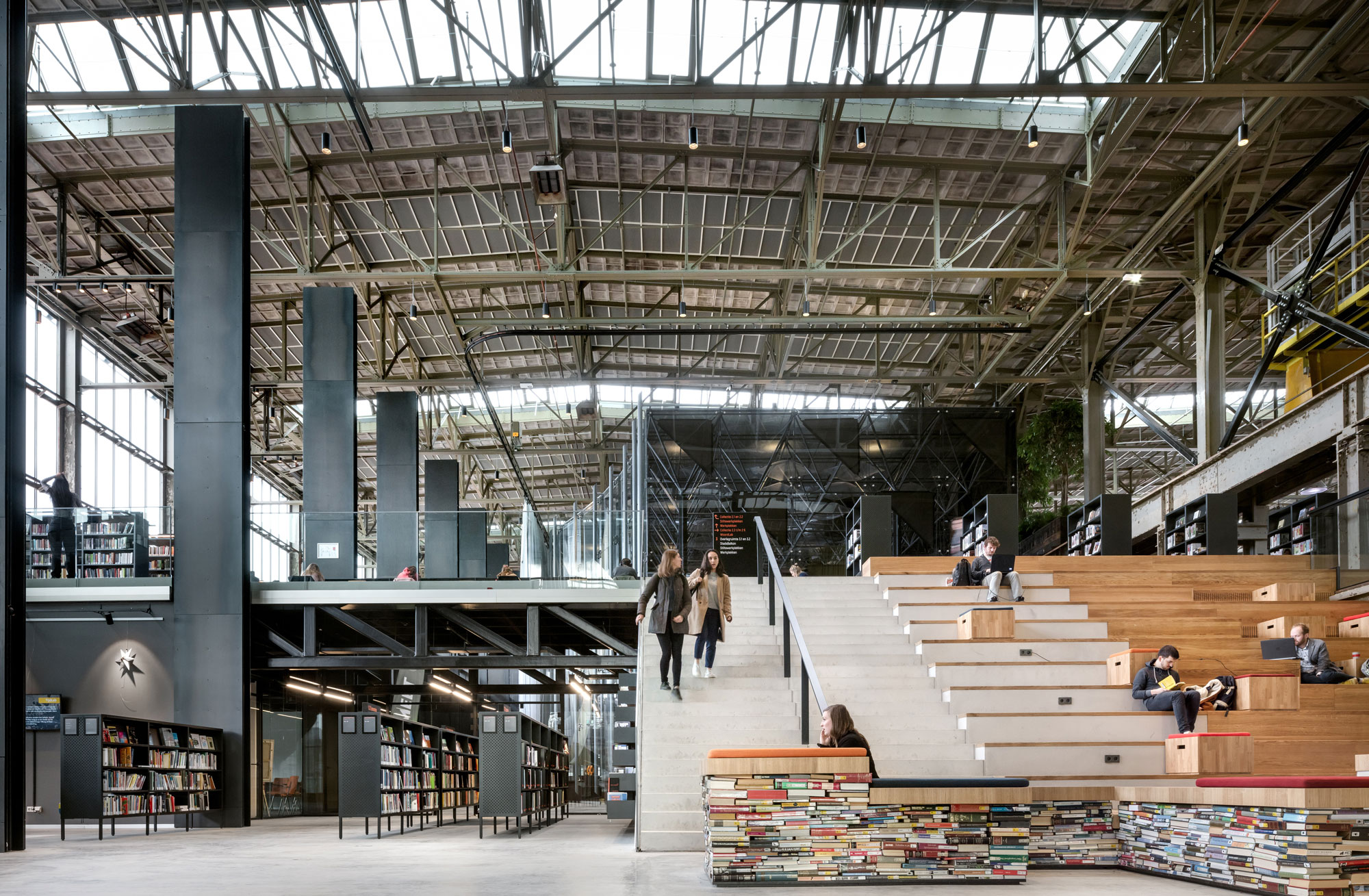 The panel of almost 150 architects, designers and academics praised the building for its versatility.

Originally a locomotive and wagon factory from the 1930s, the LocHal is in Tilburg and has been abandoned since 2009. The brief was to return the building, which the architects say “lives strongly in the collective memory of the city”, to the people.

The finished building is a mixed-use space that includes the bibliotheek midden-brabant (the public library), kunstloc brabant (a regional knowledge and expertise center for culture and art), brabant C (a regional investment fund for culture and the creative industry) and seats2meet (a series of co-working spaces).

It was this versatility that most appealed festival judges with the panel saying it had become a “social condenser” and a space where “a variety of users can meet for a variety of purposes”.

The judges also praised the design, which “celebrates and exploits local traditions of textile manufacture and… provides spaces of very different scales to provide both communal and more intimate uses.”

The LocHal was slated for demolition before the municipal government decided to transform it into the “new living room of the city”.

Stretching 90 x 60 metres with a height of 15 metres, the building is described as a covered square. A huge glass shell encompasses the entrance hall with large reading tables, an exhibition area and a cafe.

Broad steps lead up to the more intimate upper level spaces and can be used as event seating for 1000 spectators.

The spaciousness is strengthened by diagonal sightlines across the interior. The library capitalises on the existing structure, minimising the need for new structural elements and preserving the bones of the historic building.

In a space this large, heating is naturally an issue, and judges noted the system of climate zones, which preserve the openness of the building, while also heating visitors, as a key merit of the project.

Six grand textile screens enable flexible separation of areas and improve acoustics. These screens, with a surface area of 4125 square metres, can be repositioned in numerous configurations.

The project was a collaboration between multiple practices. Civic Architects were lead architect, Braaksma & Roos Architectenbureau headed restoration and Inside Outside/Petra Blaisse interior concept and curtains.

The interior design of the library, the various laboratories, cafe and offices were by Mecanoo, while Arup advised on sustainability, re-use and acoustic design.

LocHal was the category winner for Completed Building Culture.

Other winners from the 2019 World Architecture Festival

Friday’s other overall winners were:

The Future Project of the Year 2019 was awarded to THE CONNECTED CITY Oberbillwerder designed by ADEPT and KARRES EN BRANDS together with Transsolar, Büro Happold and Kraft. Located between meadows, cultivated farming landscape and the suburban sprawl of Hamburg, the concept outlines a 360-hectare masterplan featuring a mix of housing, business, shopping, public buildings and recreational activities.

The Landscape of the Year 2019 was awarded to Original Design Studio for its Demonstration Section of Yangpu Riverside Public Space in Shanghai, China, which reconnects the city with the waterfront by reusing the material language of this historic site in an innovative way.

The Small Project of the Year was awarded to Studio Link-Arc for its children’s pavilion Lokadhatu (The World). Judges highlighted that the design “blurred the boundaries of interior and exterior” and “merged with the environment”.

The Best Use of Certified Timber was awarded to Australia’s iredale pedersen hook architects with Advanced Timber Concepts Studio for the Pingelly Recreation and Cultural Centre in WA.

The Use of Colour Prize went to Archimatika for Comfort Town, which brings colour to a 40-hectare Kiev suburb of 180 low-rise apartment buildings.

Hopkins Architects received the prize for The Best Use of Natural Light, for the Smith Campus Center at Harvard University.

Of the 60 shortlisted Australian practices, iredale pedersen hook and Advanced Timber Concepts Studio were the only ones to score an Overall Winner award.

But there was one other Australian winner at last week’s festival – TERROIR.

Judges said the single family home in Sydney “shattered the boundaries between inside and out”.

The irregular concrete shell of the home was informed by the landscape tectonics iconic to the Castle Cove area, which the architects describe as “steep, angophora-lined ravines containing tributaries that run down to the harbour”.

Alongside COX, which was highly commended for use of colour, a handful of other Australian projects were singled out for commendation in their categories.