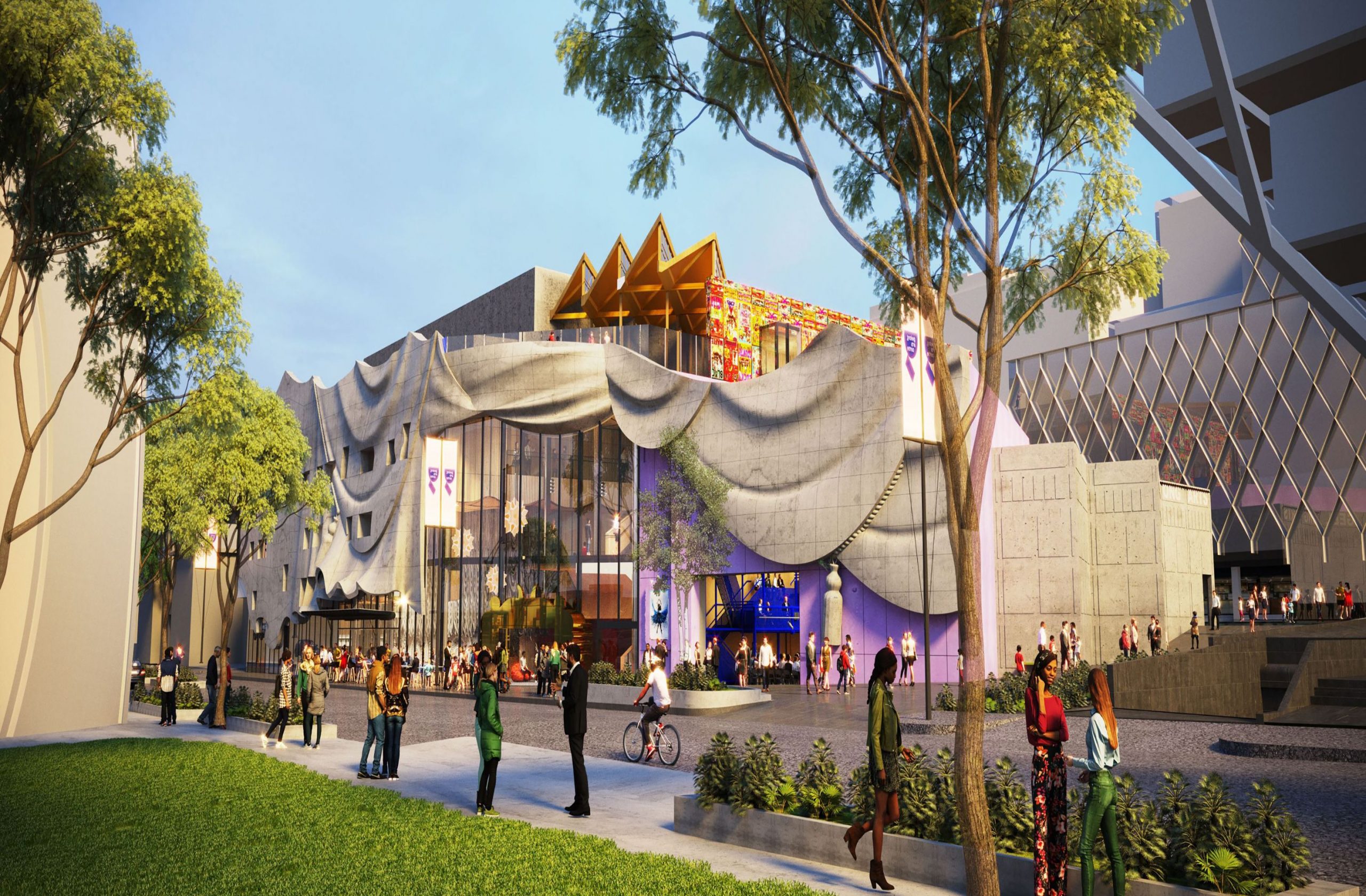 ARM founding director Ian McDougall says each element of the external design is enriched with a “story of its own, whether that be visual references relating back to performance, the historical context of the site or to Wadawurrung culture and traditions.”

Honouring the precincts’ existing campus-like structure, the building has been envisioned as a series of destinations, each with its own design narrative where new and existing facilities connect via paths from Ryrie Street to Little Malop Street.

The building features an external concrete drape that runs across the front of the structure, complementing a circus “Calliope-shaped” entrance that references early traveling performance in Victoria.

“We engaged the Wadawurrung Traditional Owners Aboriginal Corporations as co-designers in this project, also working with First Nations people in Geelong to identify key opportunities very early on,” says McDougall.

“The design has its own identity which feeds back into its location. It’s telling the story of Djilang (Geelong), and of the profound traditions of performance on the Wadawurrung site for thousands of years.

“This is what speaks to people all over the world through its design. It’s a celebration of everything Geelong is.”

With this in mind, each of the building’s four levels evokes a different Wadawurrung creation narrative with Earth and Ochre Country expressed at ground level, ascending to Moonah Forest Country, Sky Country and Night Sky on level four.

Internally, the building features a multi-purpose layout, with each space lending itself to a variety of arts, performance and general community use.

The centre includes a 500-seat theatre that can expand to 800 for live gig performances, a 250-seat hybrid theatre connected to the Little Malop Street Plaza and a range of entertainment and dining experiences.

“Its interplay of texture and colour imparts a curious and dynamic atmosphere, inspiring people to express their individuality in connection to the rest of society.”

Due to be completed in late 2023, The Geelong Arts Centre will be Australia’s largest regional arts centre.

It’s funded by the Victorian Government and is being delivered by Geelong Arts Centre, Development Victoria and Creative Victoria with builders LendLease.

ARM is the architecture, urban design and interior design practice behind projects like the Monash University Clayton Campus Chancellery, Sydney College of the Arts Relocation and University of Melbourne Arts West.

ARM is the only practice to have won the Australian Institute of Architects Victorian Chapter Medal six times. In 2016, its Founding Directors jointly won the institute’s Gold Medal.

The power of architecture and placemaking for local communities