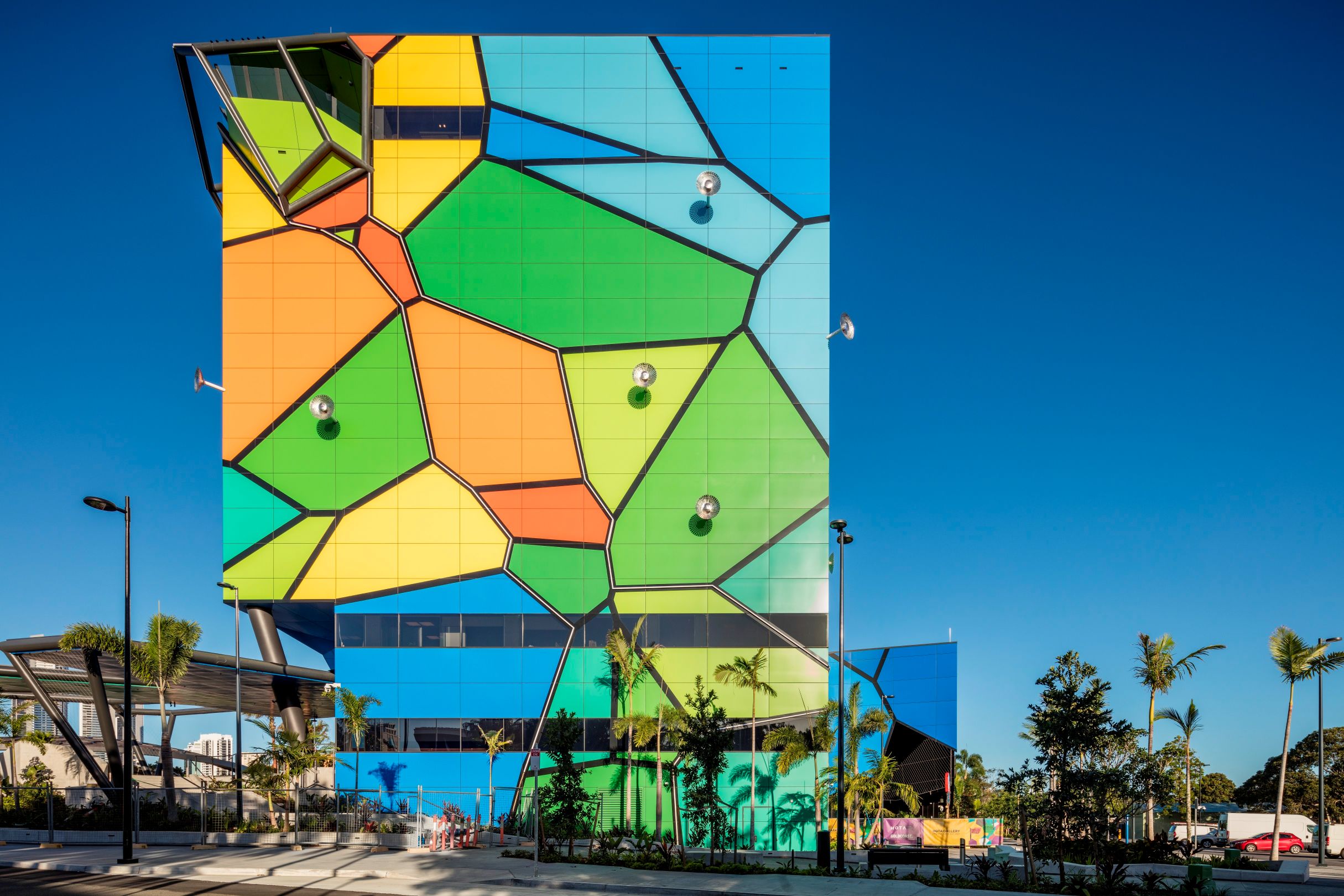 ARM Architecture has completed its $60.5 million overhaul of the Home of the Arts (HOTA) Gallery, drawing inspiration for its 3D cellular facade from a Voronoi – a network of tessellating five-sided cells that occurs in nature.

The Gold Coast gallery is the third phase of a staged masterplan, completed by ARM in 2013 in collaboration with German landscape architects TOPOTEK1, with the brightly coloured “cellular-looking web” being used as a feature throughout the precinct.

“In the HOTA masterplan, an imaginary Voronoi is overlaid on the whole precinct to determine the shapes of buildings, sculptures, pools, paths, seats, cladding, umbrellas, even sections of a wharf,” explains ARM Architecture.

“Voronoi shapes in nature adapt and shift in response to external change—this is a perfect structure for a cultural precinct that reflects the furious, youthful energy of Australia’s sixth biggest city.”

The practice enveloped the gallery’s facade in the 3D Voronoi, carving out parts from the foyer, verandah and terraces.

Fissures of feature lights, described as “fractures”, run up the face of the building, inspired by the rock formations of the nearby Springbrook National Park.

The practice has previously used the 3D Voronoi design on its Swanston Street Wintergarden and the Melbourne Recital Centre. Here on the Gold Coast, the motif is also a key design feature in the nearby HOTA Outdoor Stage, completed in 2017.

At 5500 square metres, HOTA is one of Australia’s largest regional galleries. In the new building, spaces are distributed in a vertical format across six levels.

“The vertical format provides visitors with a varied experience when meandering through the permanent collections on levels 2, 3 and 4,” explains ARM.

“The building also interacts with the surrounding landscape at the ground levels, with areas that spill out into the landscape and where the landscape is allowed to venture in.”

Visitors entering the ground floor foyer and main exhibition hall will be greeted by touring exhibitions of an “international size and scale”.

This floor will also feature an exhibition space for the City Collection and temporary exhibitions, a dedicated Children’s Gallery and almost 1000 square metres for collection storage and exhibition preparation.

Beneath their feet is the climate controlled storage and back of house, while a dark timber feature stair weaves up the tower to the next three floors, allocated to house the city’s $32 million artwork collection.

Established in 1986, it includes one of the largest collections of Aboriginal and Torres Strait Islander art in regional Australia.

On the top floor, a restaurant and events space looks out onto views of the Gold Coast skyline, Nerang River and hinterland.

Featuring a modern Australian menu and degustations inspired by the major exhibitions, Palette Restaurant sits alongside the more casual The Exhibitionist Bar on this floor.

HOTA Gallery is the centrepiece of the Gold Coast City’s Cultural Precinct Masterplan, which will guide the evolution of the precinct over the next 10-15 years.

Its inaugural headline exhibition, Solid Gold: Artists from Paradise, will be on until 4 July 2021 and premieres new works from emerging and established artists celebrating the diversity, richness and ambition of the Gold Coast.

Commissioned by HOTA, it includes Hiromi Tango, Michael Candy, Abbey McCulloch, Samuel Leighton-Dore and Libby Harward, alongside locally recognised artists and collectives, and will present a series of indoor and outdoor works.

Founded by Howard Haggatt, Ian McDougall and the late Stephen Ashton, ARM is an architecture practice with studios in Melbourne, Sydney and Adelaide.