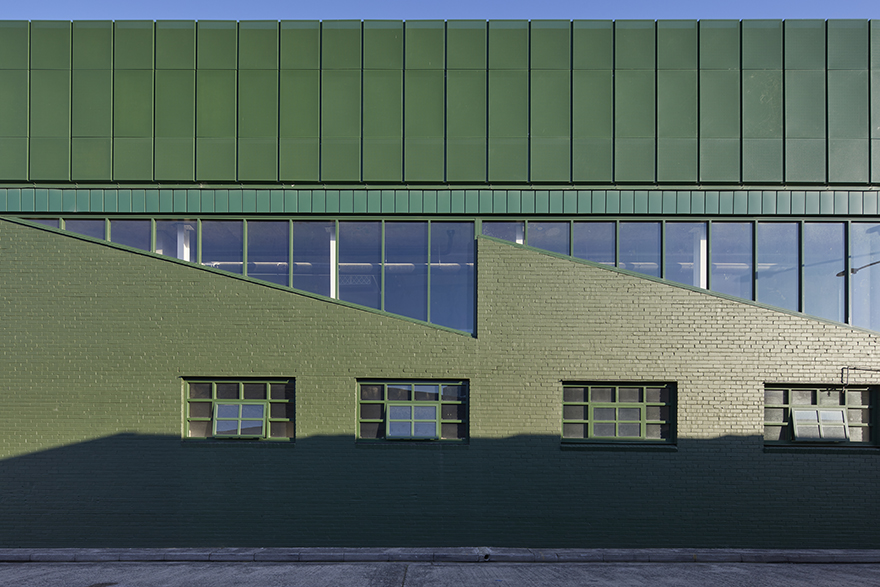 SJB sought to bring a “sense of play” to a changing neighbourhood five kilometres from Sydney with a Spinach Green-coated office and childcare centre.

“[It] is an equally brave strategy. Relying upon a single colour to characterise a project requires the highest level of courage and conviction on the architects’ and the clients’ part,” it wrote.

“This striking warehouse conversion captivates from the streetscape, with the rich, vibrant Dulux Spinach Green creating a colour-blocking effect as it plays across the brick and metal of the façade.”

The 695sqm of open rooftop landscaping is fashioned from “tactile natural materials” such as sandstone boulders, recycled timber sleepers, sand pits and mulch, alongside herb/veggie and flower gardens.

Indoor play spaces are open plan and highly flexible with a contemporary-industrial material palette that references elements of the green exterior, with birch plywood joinery proving a sense of “rawness and warmth” throughout.

The year’s Grand Prix New Zealand winner was Undercurrent for Central Hotel by Naumi Hotels, with the jury making noting of the architects’ “wondrous celebration” of Queenstown ‘s sights and colours.

“Instructed by their client to avoid whites and neutrals, the architects unleashed their vision,” it wrote.

“The depth of colour saturation is profound, with comprehensive application, across surfaces and furnishings throughout. Memorably original and wonderfully playful, this is a project with vast attributes.”

Earlier this year, SJB made a slew of new appointments in its architecture and planning studios in Melbourne, adding to its leadership team across the two fields.