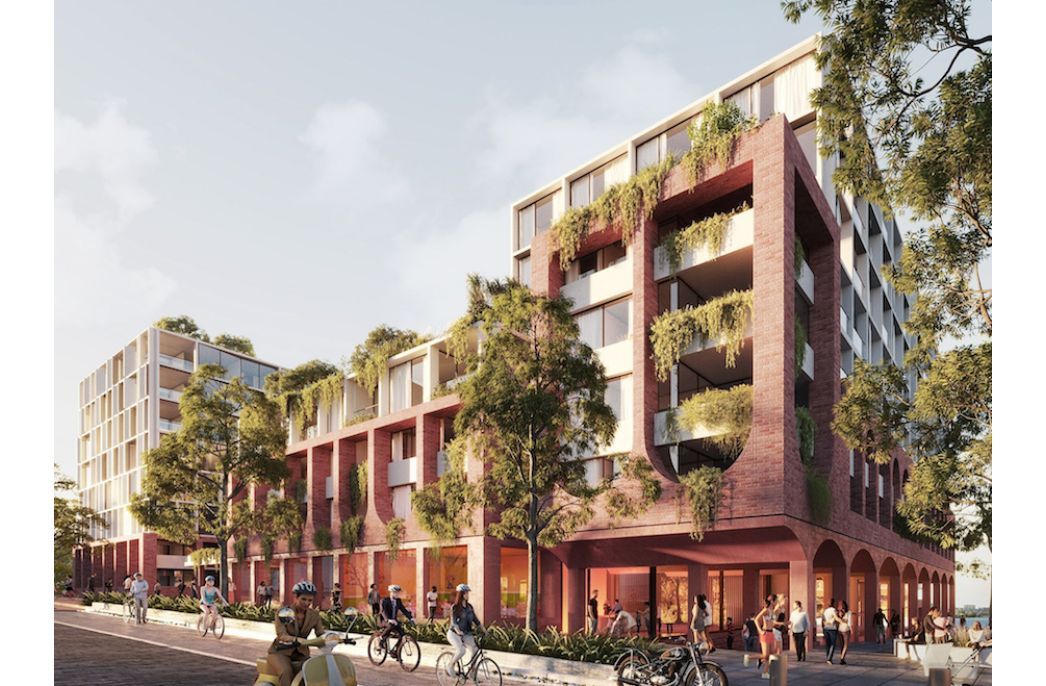 A collaboration between SJB and Land and Form Studios has resulted in the winning competition entry for Billbergia’s 25-27 Leeds Street.

As the first major development under the Rhodes East Master Plan, 25-27 Leeds Street will seek to create a biophilic and permeable precinct, expanding the long-term regeneration of the area from the former industrial brown-field land.

“The project will deliver 6000 squaremetre of public open space, including a retail and dining precinct and will open up the waterfront promenade with an interactive river edge for the community to enjoy.”

The winning design from SJB and Land and Form Studios, responsible for the architecture and landscape respectively, was selected from three entrants in a design competition with a jury featuring representatives from the City of Canada Bay Council, the NSW Government Architect and Nation Architects.

SJB director Nick Hatzi says the practice has a long-running connection with Rhodes, completing the first master plan for the regeneration of the suburb in 2005.

“We’ve delivered many mixed-use buildings in the area including most recently Rhodes Central by Billbergia, which forms the retail heart of the suburb.

“Our proposal for Leeds Street opens up new connections to the water and reflects SJB’s approach to permeable and civic-centric mixed-use development.

“Being the first development under the master plan, we hope this precinct sets a high benchmark for the incoming community.”

The design has to address a number of key interfaces, including the foreshore to the north, the historic bridge to the west, the transitioning industrial context to the east, and a proposed public school and grounds to the south.

As the first development under the Rhodes East Master Plan, the task is to ensure these facets are addressed appropriately and to provide an inspiring design that encompasses the goals of the desired future character of the precinct.

The proposal is a collection of varying scaled buildings with a defined podium of a singular material and lighter-coloured concrete forms above.

The landscape is embraced throughout the development, incorporating greater permeability at the ground plane through site connections, a 1:1 coverage of landscape over the development and a new public open space.

“The foreshore design represents this transition from natural to urban, creating an iconic destination that looks to restore and enhance important ecological assets and allow people to actively engage with the Parramatta River, setting a high-quality precedent for the Rhodes East Precinct.”

25-27 Leeds Street will also be laid out to optimise views and solar energy. Internal facing courtyard apartments receive snippets through the building gaps towards the river ensuring at least 85 percent of apartments have ideal outlooks.

“This project will reimagine the Rhodes waterfront and forms a critical piece in the NSW Government’s rejuvenation of the Parramatta River waterfront from SydneyOpera House to Parramatta Park,” adds Kinsella.

Also in Sydney, take a look at Five Foot One Design’s new retail space at the Sydney Opera House.