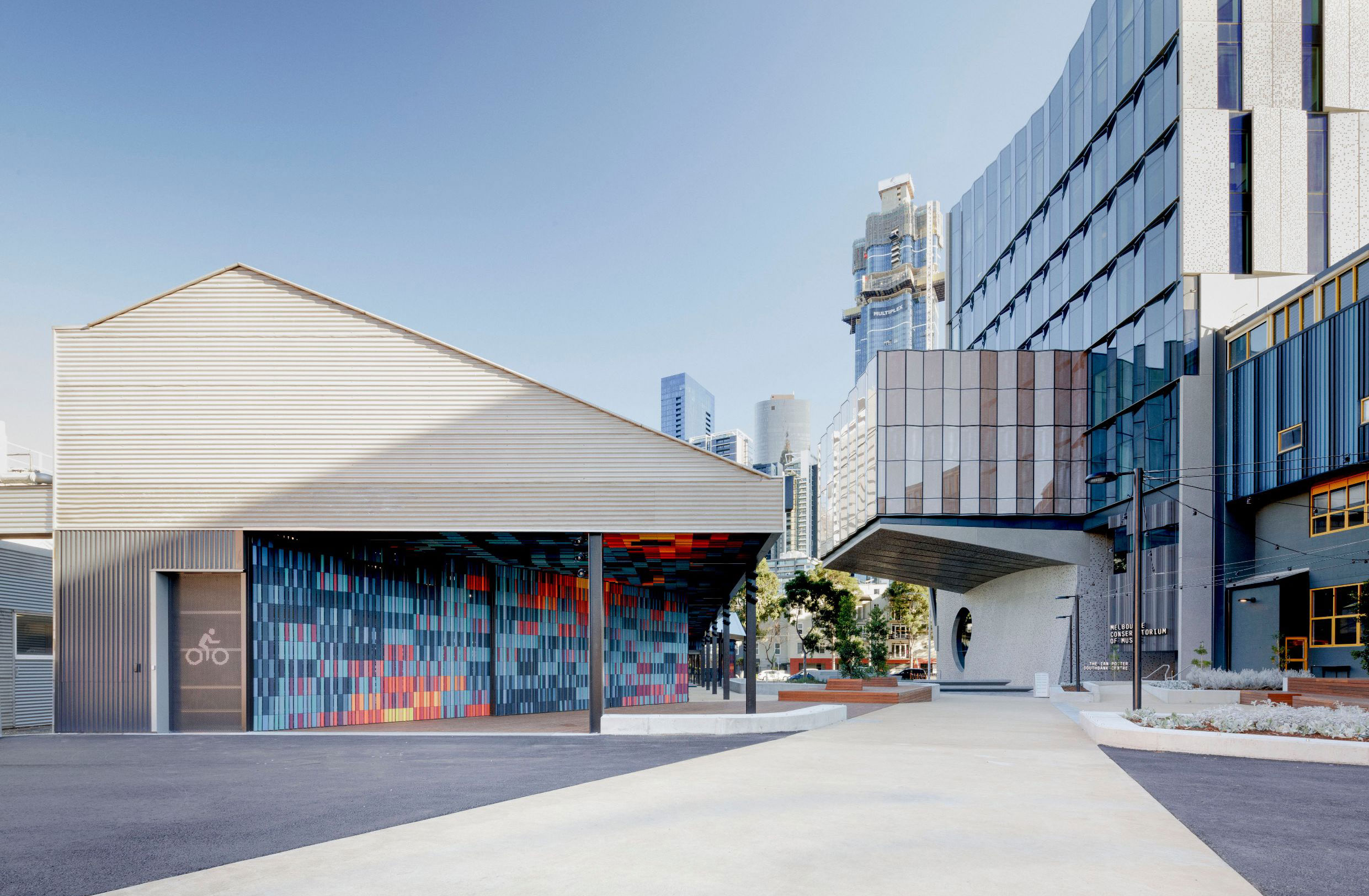 The project used a new facade to update bicycle storage and change rooms, which is revealed upon campus entry at the University of Melbourne Southbank.

The jury, which included Foolscap director Adele Winteridge, Jean Pierre Biasol and Richards Stanisich Architecture director Jonathan Richards described the project as “ambitious in its conception and labour intensive in its realisation.

“The random pixelated effect of the thousands of painted battens is intricate like a woven textile, ever changing under different light conditions. It draws one into the space,” it said.

The Melbourne practice co-founded by Nick Searle and Suzannah Waldron in 2007 also won the Commercial and Multi-Residential Exterior Award for UOM Southbank – End of Trip.

Judges commended the project for avoiding the “uniformity and blandness” common in social housing projects.

“With colour as a key tool, individual homes have been given unique identities while still visually integrating into the surrounding area as a whole,” it said.

“This is a genre-busting project, worthy of high praise.”

The awards’ other big prize, the Residential Interior award, was given to Green Anvil Co + Killing Matt Woods + Set For Art’s concrete bunker-inspired Perfect Storm, which was described as “utilitarian chic at its best”.

Commendations were given to Studio Bright’s Ruckers Hills House.

While in the commercial interior categories, Armitage Jones took home the Workplace and Retail prize for its tonal use of colour to create defined zones for the Bergman & Co offices.

Commendations were given to Adam Kane’s rich grey office in South Melbourne.

Another Victorian project won the Commercial Interior- Public and Hospitality award with the jury praising Branch Studio Architects for the “impact and sophistication” of the Arts Epicentre – a new building that physically merged the Caroline Chisholm College’s creative programs together.

The commendation in this category went to Sibling Architecture for its refurbishment of the Darebin Arts Centre, originally designed by Harmer Architecture in 1996.

Finally, the 2020 Dulux Colour Awards student prize was given to Sydney Design School’s Louise Mackay for the pop-up cafe Ascend.

Guests were invited to graffiti the walls of the cafe with messages of joy during the Sydney Festival and Carriageworks.

The paint brand released its colour palettes for 2021 recently, opting for three tonal palettes that “prioritises natural colours and textures”.