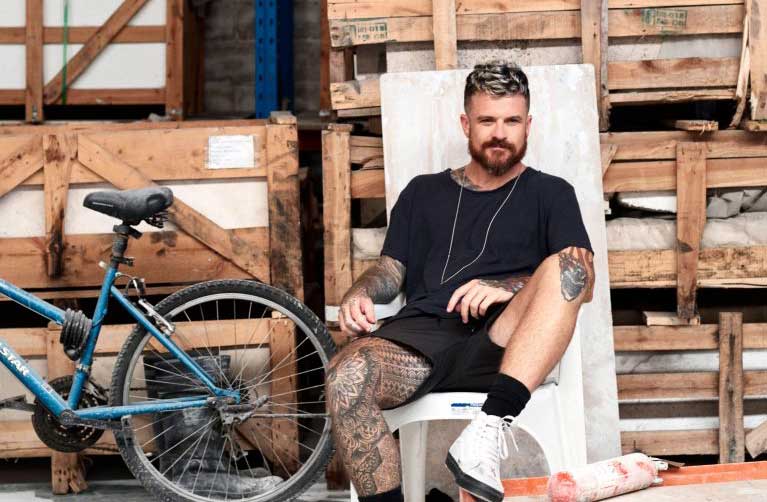 Design for design’s sake continues to plague the A&D industry here and overseas, but Killing Matt Woods is working to change that, starting with his own Sydney studio.

“How do I get out of bed in the morning?” asks Matt Woods in response to what is possibly my biggest foot-in-mouth moment as a journalist to date.

“Initially, I was thinking that I would fight the good fight from the inside to make the positive change. In a lot of the ways I’ve adapted my business, looking at things like recycled materials, low embodied energy and low embodied water content, while also investigating design construction. So how do we de-fit a project at the end of its life? How do we reuse elements? How do we repurpose old interiors and redistribute them for the next iteration of that project?

“It’s definitely a struggle and one of the reasons I’m trying to expand beyond hospitality because we’ve reached a point where the industry is completely saturated, and things last six months, if you’re lucky. It’s depressing.”

But to call Woods pessimistic is misguided. The Sydney interior designer’s thought-provoking studio name may casually allude to murder, but the man himself is a study in contrasts. He’s obsessed with Brutalist behemoths, but staunchly opposed to concrete; committed to fighting for a more sustainable industry, but famous for finding his feet in the incredibly fleeting hospitality sector; and frankly, a tattooed badass who listens to heavy metal, but crafts beautifully refined, minimalist spaces that are just asking to be swooned over.

And he takes my less-than-tactful questioning of his ethics with good humour. He is well aware, after all, that interior design is rarely environmentally friendly, but he goes out of his way to do more than just talk about why it should be.

“When it comes to clients, I don’t actually give anyone the option. I don’t say, ‘There’s this beautiful hardwood timber floor that’s been recycled and then there’s this new stuff that’s not from a sustainable source.’ I don’t give them that choice. They may not like it and I’ll find something else, but sustainability is ingrained in every part of every project.”

Woods originally studied industrial design, before moving into interior design and picking up a postgraduate certificate in Sustainable Architecture from Sydney University.

He puts the latter to good use, particularly in his latest residential project, Perfect Storm – an intimate yet utilitarian apartment inspired by Brutalism and the local warehouse vernacular.

On the surface, it looks like the MTV Cribs’ version of a bomb shelter – pared back concrete with fluted kitchen joinery, curved ceiling forms and some mid-century accents. But take a closer look, and the solid-seeming shell is Glass Reinforced Concrete (GRC), which has far less weight and cement than traditional concrete techniques, finished with French Wash Porter’s Paints.

The finishes are VOC (volatile organic compounds)-free, the timbers FSC (Forest Stewardship Certified) and the chrome and cement kept to a bare minimum, an ethos mirrored in the waste-efficient construction process.

“The client wanted a concrete bunker-like aesthetic, but we wanted to do it in the most sustainable way possible,” says Woods.

“I would love to use concrete – it’s one of my favourite materials – but it’s really hard to justify using a product like that on something that’s not going to be there for the next 500 years.”

Woods is infatuated with all things Brutalist. His dream is to create a sustainable resort, ideally along that design vein.

And while he’d love to have a tonne of clients with a tonne of money they don’t mind him spending, he often attracts the sort of people who don’t have a lot of cash, but aren’t seeking affordability over sustainability.

“The social housing Brutalist-era architecture that was coming out in the late ’70s, early ’80s is a big influence. I like to think of myself as a working class slob. That’s my background. That’s my history. That’s something I like to elaborate out,” he says.

“The business has its own individual personality that is reflective of me. For better or worse, the whole Killing Matt Woods probably turns some people off. I’ve often thought, ‘Should I change things? Should I try to attract a broader client base?’ But I don’t know if I could work on a multimillion-dollar mansion on some Sydney Harbour beach.”

It’s no secret that Woods’ predilection for dark and brooding spaces where texture triumphs over colour is in contrast to the sun-bronzed optimism of his home. He admits it’s a ‘love hate’ relationship.

“I often have people tell me I don’t belong in Sydney. I belong somewhere else in the country. I’m just trying to do my own thing and not pay too much attention to what’s going on. But I can’t help but see everything that is going on.”

That’s especially the case, he says, when it comes to Sydney’s obsession with design for design’s sake.

“There is so much superfluous s**t out there. At the end of the day, design is such a luxury item and not everyone can afford design, so I’m trying to be more real. What is more achievable within the set time-frame? How can we be smart about what we do from a financial and an environmental perspective?

“I spend a lot of time on those elements that will improve people’s lives rather than just putting in the trendiest, latest whatever it is. But I do ask myself, ‘How do I create the change out there?’ Maybe I need a louder voice.”

For now, Woods will keep trucking along on a path that will hopefully lead to that Brutalist resort in the sun and a future where he’s not shouting solo.

“It would be nice for everyone to get on the same page and speak from the same sheet. I think that, as designers and architects, we need to be the educators and the leaders, because clients are often doing things for the first time without having thought about everything. So if architects and designers aren’t pushing sustainability, we can’t expect the client to do so.”

Founded in 2009, Killing Matt Woods is an interior design studio based in Sydney.