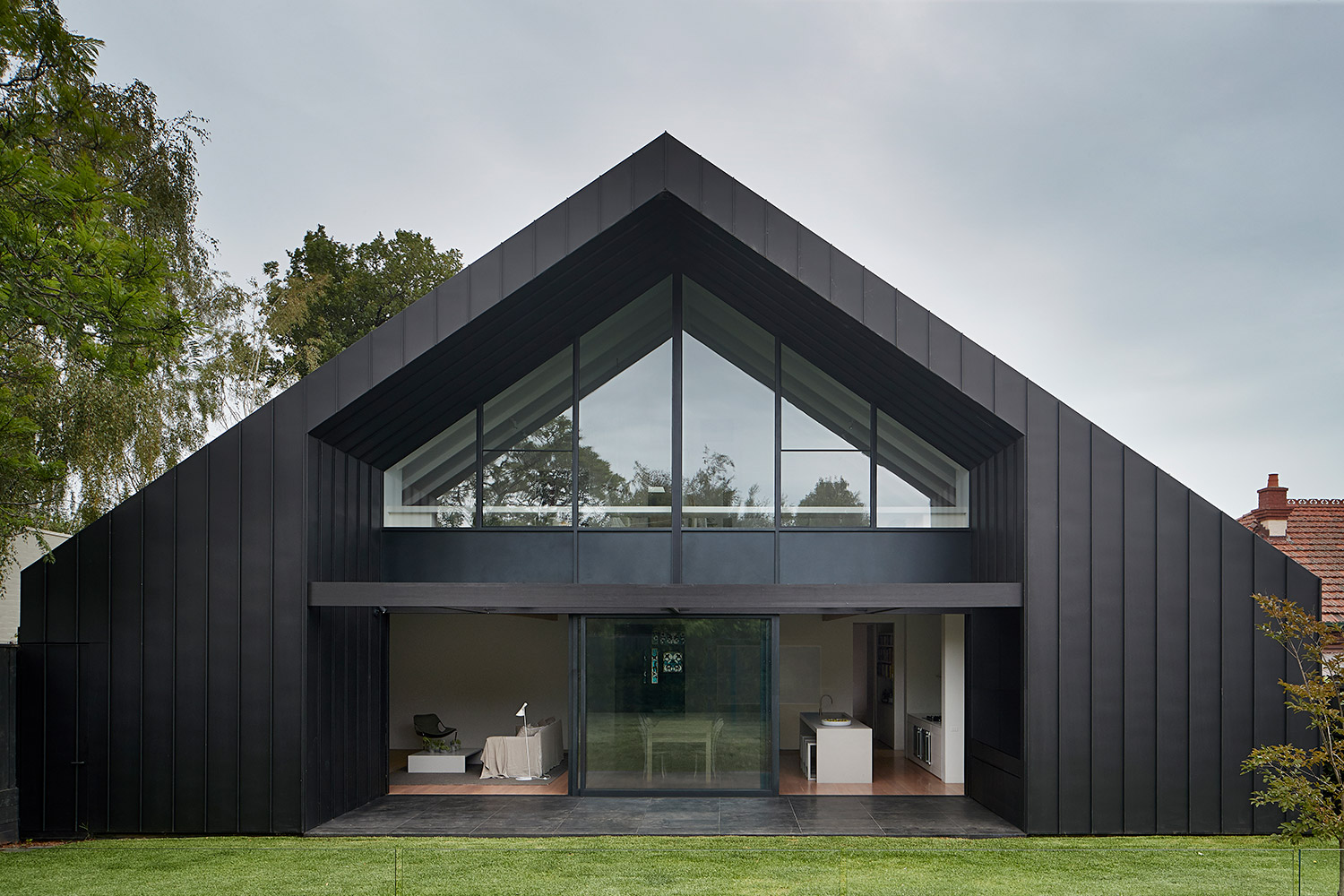 Focused on “fusing old and new”, studiofour has expanded a Federation-era family home with the addition of a dramatic black zinc-clad extension.

Located in the Melbourne suburb of Malvern East, Central Park Residence presents an unchanged face to the streetscape of similarly built Federation homes.

It’s only until you step to the back of the property that you catch a glimpse of the addition, which houses the new kitchen, dining and living spaces and opens onto the backyard.

But the approach, explains the Melbourne studio, was not to separate ‘old’ and ‘new’, but bridge the two together aesthetically and functionally.

“The design brief was to take cues from the existing craftsmanship and pattern language of the Federation home, using these elements to inform the design response,” it explains.

“Both existing and new areas of the house benefit from a sense of connection; through colour, texture and material choice.”

studiofour created this synergy by syncing the materials used throughout. The tessellated tiles of the original front verandah are reflected in the kitchen splashback and joinery of the butler’s pantry as well as in the bathroom floors.

Elsewhere, the exposed beams of the entry corridor are repeated in the new addition, while the black zinc cladding used on its facade is mirrored in the black steel mantels and wood store in the original.

The silhouette of the oversized steep peak of the extension itself is a modernised version of the Federation pitched facade.

studiofour chose to eschew what it describes as the “traditional approach” to maintaining period rooms intact with the addition of a large open-plan space to the rear.

“This project provides a cohesive solution that ensures all areas of the home are open, light filled and connected,” it says.

“All communal living spaces, spanning between both old and new building fabrics, were opened up and made permeable.

“Not only does this provide functional benefits of connected spaces for various entertaining situations, but every space is afforded maximum natural light, fresh air and landscape aspect.”

Extensive glazing on the two-storey addition meets the clients’ brief, emphasising light, air and connection to the garden, while inside, small existing doorways were replaced with large portal openings.

Additional light was drawn into the original home through the addition of steel-framed glazed doors leading to the entrance corridor.

The brick walls on either side of back-to-back fireplaces were knocked down so the sitting room and dining room could be connected, while in the master bedroom, orientations were rearranged to connect to a new interior courtyard.

“Focus and energy was directed at helping integrate the existing heritage spaces, as these were uninviting, often forgotten and clearly disconnected from the original 1980s extension,” says studiofour.

“With strategic re-planning and the interconnection of a new two-storey addition, the functions of the house have been extended and rejuvenated, and the design adapts to suit the ever changing dynamics of this family’s life.

“The spaces new and old now possess a fluidity and a stronger connection to fresh air, aspect and light.”

Muted and textured tones are used throughout to further “bleed” the spaces.

A strong palette of black, greys and whites are repeated with textured walls, neutral furnishings and minimalist lighting.

The same timber flooring further ties the spaces, breaking only to meet the black tiles of the new courtyard and the grey bricks of the two fireplaces.

“The sense of connection through colour, texture and material choice extends to the selection of artwork,” concludes studiofour.

“Pieces with black edging adjacent the black stained glass, concrete sculptures alongside the concrete bagged finish to the existing brickwork, and bath linen with grey stitching sitting against the patterned floor tiles highlighted with grey grout.”

Central Park Residence was shortlisted for IDEA 2020’s Residential Single category. Entries for IDEA 2021 are now open. Get your project in before 25 June 2021!

studiofour is a Melbourne-based collective of architects and designers, led by directors Annabelle Berryman and Sarah Henry.

inside recently visited Henry’s Melbourne home, which is designed as an exploration of how to live with deliberation and humility.