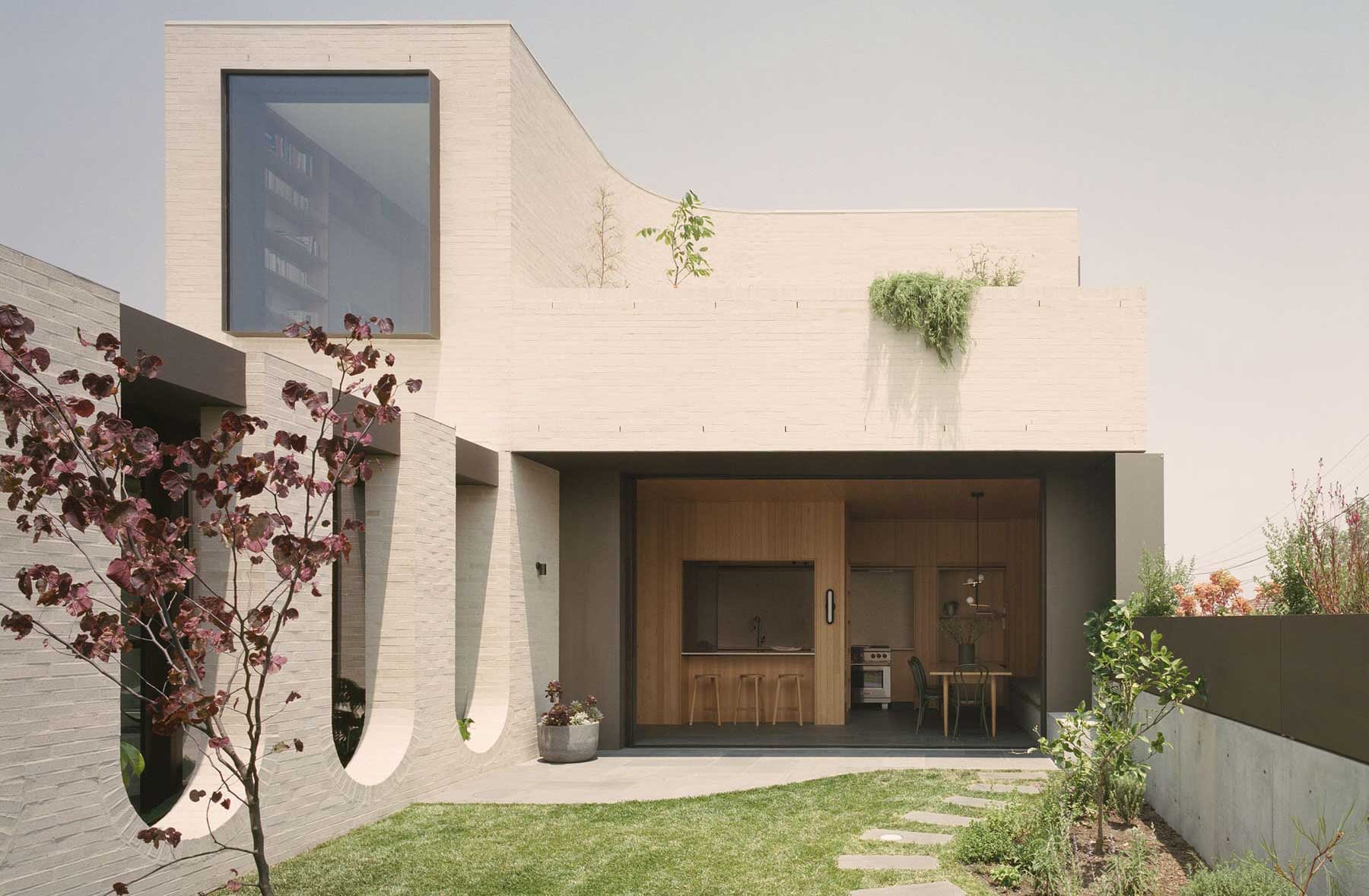 Studio Bright has restored and enlarged a prominent corner-sited Edwardian home in the Melbourne suburb of Northcote to include a nod to Ancient Rome.

Home to a family of five, the declining property had been previously modified with a lean-to containing no natural light or relationship to the garden.

The clients asked Studio Bright to design a two-storey addition at the back of the site that would provide them with much-needed extra living space.

“The new pavilion expands the nuanced living possibilities. Rooms are configured for the specialised interests of particular family members, yet each offers scope for temporal adaptations on the fly.”

Akin to a garden pavilion, the north-orientated addition “explores its own design expression” with a stacked white brick exterior. Off-form concrete fencing was inspired by the backyard sheds common in the area.

Inside, an open-plan living area includes a kitchen lined in light-hued battens of wood with a peach-toned splashback.

The adjacent sitting and music room has a heavy green curtain that can be drawn to transform the space into an “”impromptu theatre” with steps forming the stage’s edge.

A suspended staircase leads to the first floor rooms – a library, lounge, guest room and study.

This upper volume of the extension dips inward on two sides to form a pair of decked courtyards, each bordered by planters.

“As well as being displaced to advantage on the site, the new addition is freed to explore its own design expression complementing the original house,” says Bright.

“The upper levels, poised on the crest of the hill, have city views of a drama unimagined by the Edwardian house.”

A key challenge of the project was linking the addition to the Edwardian home. Studio Bright eventually settled on a long, light-filled corridor punctuated by upside-down arched windows and a Roman-style pool.

“A long linear space without specific use is an oddity,” explains Bright.

“But by locating open garden towards the street and siting the new pool behind the link, we could make a pathway space that’s all about swaying greenery and the rippling, reflected play of light.”

At the threshold of the new and old is a commissioned stained glass artwork by Nadine Keegan that inscribes the histories of the site and recognises the area’s traditional owners, the Wurundjeri people.

“We have worked with diverse makers and designers, with a focus on businesses that are local, emerging or that support Indigenous people,”. says Bright.

“Internally, the retained ‘good part’ of the house was also seriously degraded with poorly executed ‘improvements’ at every turn,” says Bright.

Ensuite bathrooms and robes were added to the bedroom spaces with the studio deliberately choosing modern fixtures and features to ensure the period distinction is held in sharp contrast.

In something of an “Edwardian quirk”, the room colour palettes are bold, contrasting and personally belonging. Case in point, a gold and black room inspired by the Richmond Tigers.

“The pavilion and the existing share a new base element whose datums extend from adjoining houses,” says Bright.

“And so new layers of occupation join the old, going forward but with the hope of moving together with a renewed reverence for the past.”