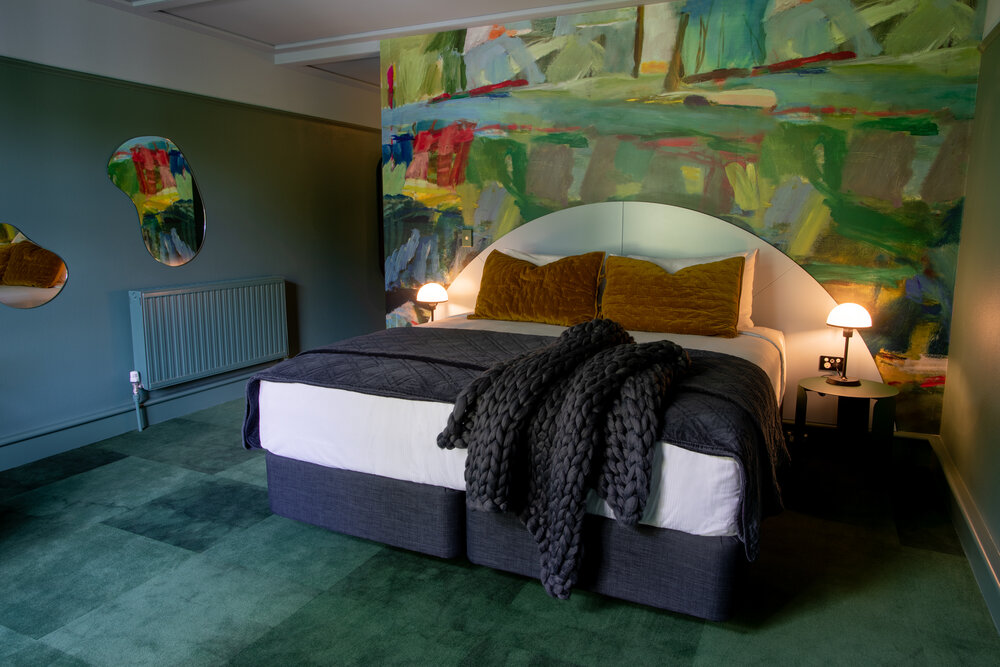 In the heart of Queenstown, the boutique hotel aims to bring the outside world into the hotel experience.

A “surrealistic sanctuary”, the hotel has a “creative cool vibe” that meets a “sense of childlike wonder and curiosity”.

Undercurrent Studio director Liv Macfarlane says about that project that her “ultimate goal was to create extraordinary spaces for memorable moments”.

She says she aimed to bring a sense of “aliveness to the ordinary” with “the human needs at the centre, and was inspired by the snow globe.

“That symbol of childhood that, when shaken, opens the door to a whole new world,” she says.

“This is how we saw the project, as an unassuming, dome-like exterior, encasing a world of possibilities, of stories waiting to be told.”

Undercurrent Studio played with exaggerated scales, installations and disproportionate sensory details to create a “tactile and memorable experience” for travellers.

“We drove towards a bold contemporary aesthetic, verging on surreal, in a bid to recreate that moment of child-like wonder experienced with a glance to the Southern Alps on the horizon, or with the shake of a snow globe.”

The client also requested no whites or neutral colours in the design.

“The bolder the colour, the happier we were going to be,” it says.

The hotel holds a dramatic point of difference between landscape, interiors and art.

Images by New Zealand artist Deborah Moss were transformed into feature walls in every room of the hotel.

Working from her studio, which is nestled in the North Auckland forests, Moss aims to translate her environment into the art she produces.

Her artistic orientation and sustainable ethos suited Undercurrent Studio’s vision for the hotel.

Each room employs a different concept, merging boundaries between the inside and outside worlds.

The Oasis Rooms, which look out onto the trees, feature Moss’s My Silver Lining, while the Habitat Rooms, which open onto the garden, feature her Autumn’s Chorus.

Sandy Bank wall vinyl substrate’s smooth texture was chosen as the medium, which “beautifully enhanced” the colours and depths of Moss’s brushstrokes.

Materialised textile designer Brigitte Marlot worked with Moss to transform her art into the interior pieces for The Central.

The original paintings are square, so Marlot modified and intensified the original colours to suit the hotel’s requirements.

“I spent some time making the two images blend into each other seamlessly and adding 10 centimetres of bleed to the top and bottom,” says Marlot.

“A sense of magic, in a single moment,” says Macfarlane of stepping from the aircraft onto the runway of Queenstown airport, which is located near the hotel.

“It was this feeling, that moment, we set out to capture in our interior design concept for Central Hotel.”

Liv Macfarlane founded Undercurrent Studio in 2020. Based in Wanaka, New Zealand, the studio designs by the philosophy that life is a sensory experience that impacts the way we live.

Similarly, North Point in the Gold Coast recently brought the outside in through its designs for this family home.