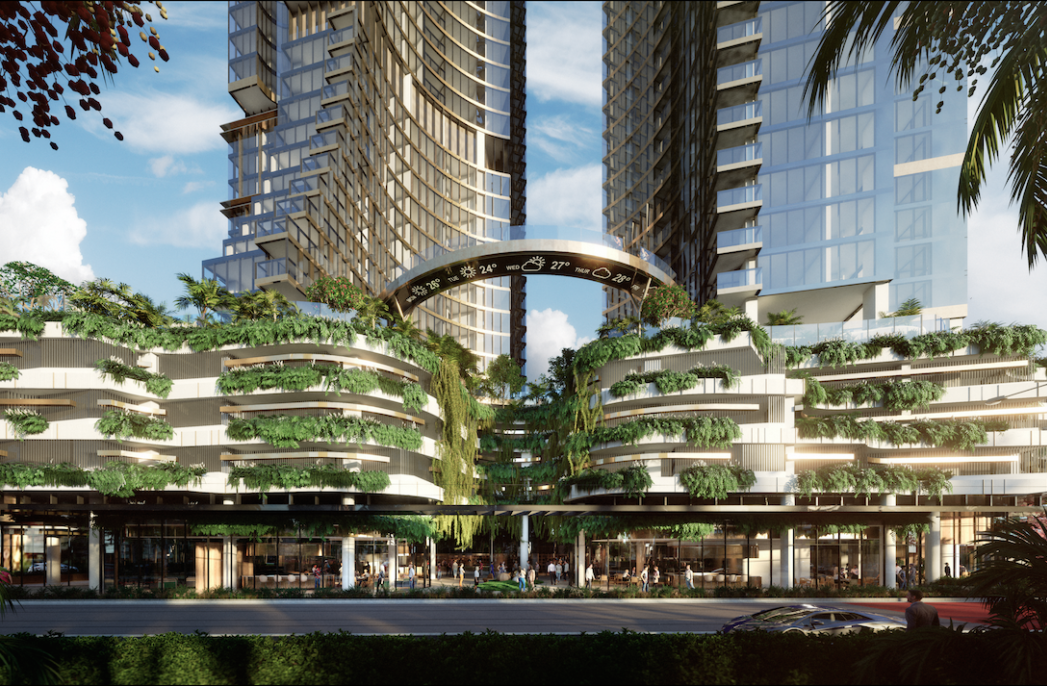 Orion Towers on the Gold Coast

Woods Bagot has won a national design competition to create the Orion Towers – a mixed-use project made up of a slender dual tower that is set to be one of, if not the tallest, residential building in Australia.

The two conjoined towers will reach 76-storeys and 103-storeys respectively and will include food and beverage outlets on the ground floor, a 165-room hotel, residential apartments and an observation deck at the apex. 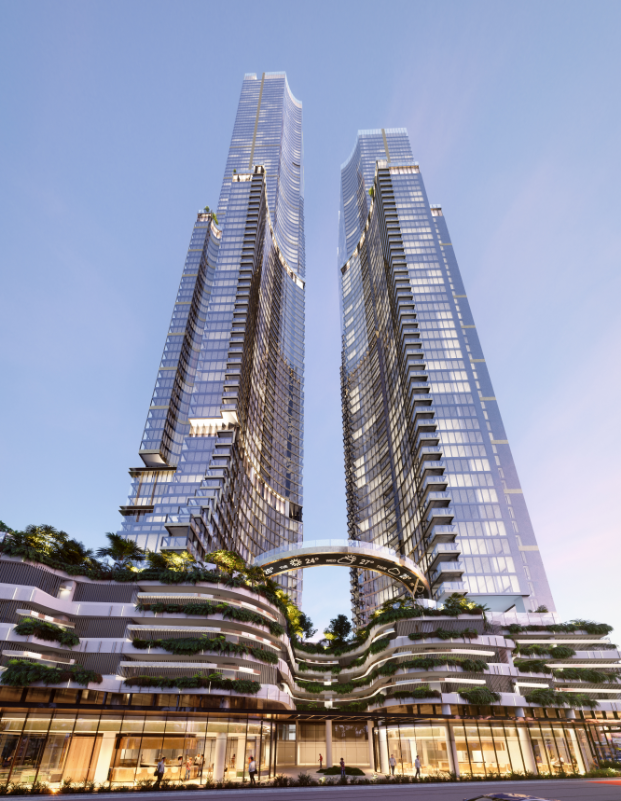 Woods Bagot Director Mark Damant says the design was initiated through a strategic place-making analysis. “With respect to both the macro (city) scale and the micro (neighbourhood) scale, the design aims to create layers of experience for residents and guests alike, from the finely-grained daily living places to a super-scaled ‘city space’ via a series of garden decks, indoor and outdoor pools, fitness, lounge and function areas.”

A five-storey mixed-use podium will offer active retail zones designed around a sculptural ‘urban canyon’, surrounded by lush planting and landscaped edges to help soften the base of the tower, with flowering feature trees providing shade and visual amenity to the ground and lower levels.

“We wanted to create a modern, metropolitan oasis in the heart of the Gold Coast,” says Woods Bagot Senior Associate David Lee. “Achieving a balance in scale and proportion between the towers and the podium, the design focused on activating the street edges at the ground plane and articulating the façade to soften the way the tower base is perceived in the public realm.” 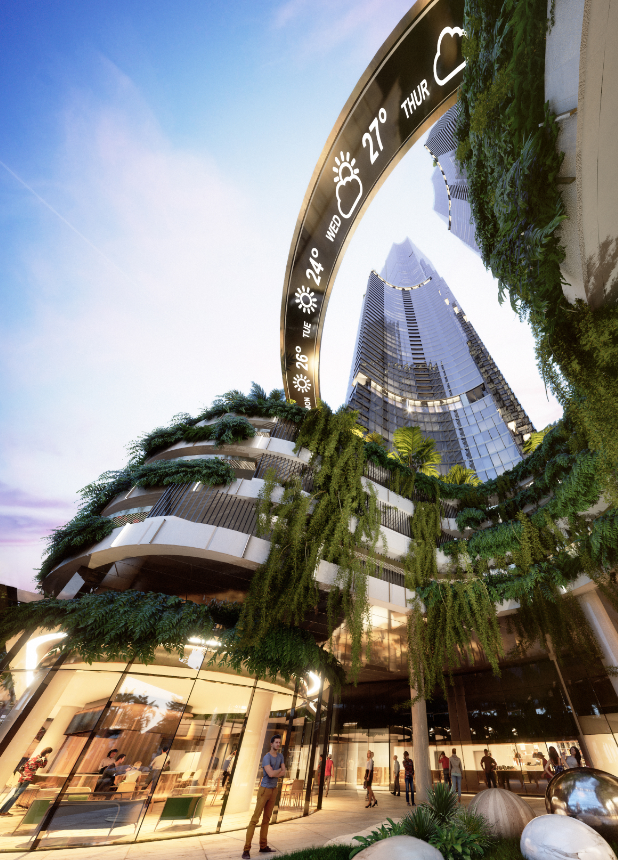 The towers are linked at the podium levels by an elevated, curved bridge dubbed the ‘curious ring’. The bridge will feature a large LED matrix screen on its underside, which will display information such as time, weather and community event information. Woods Bagot anticipates this modern interpretation of the town square clock tower will become a new place for people to meet and gather.

The design features horizontal gold banding to streamline the façade as it rises into the sky, becoming graduated from the lower floors to emphasise the curvature of the form. The inward-facing tower facades have an articulated geometry that directs the view outwards, designed to increase privacy for residents. 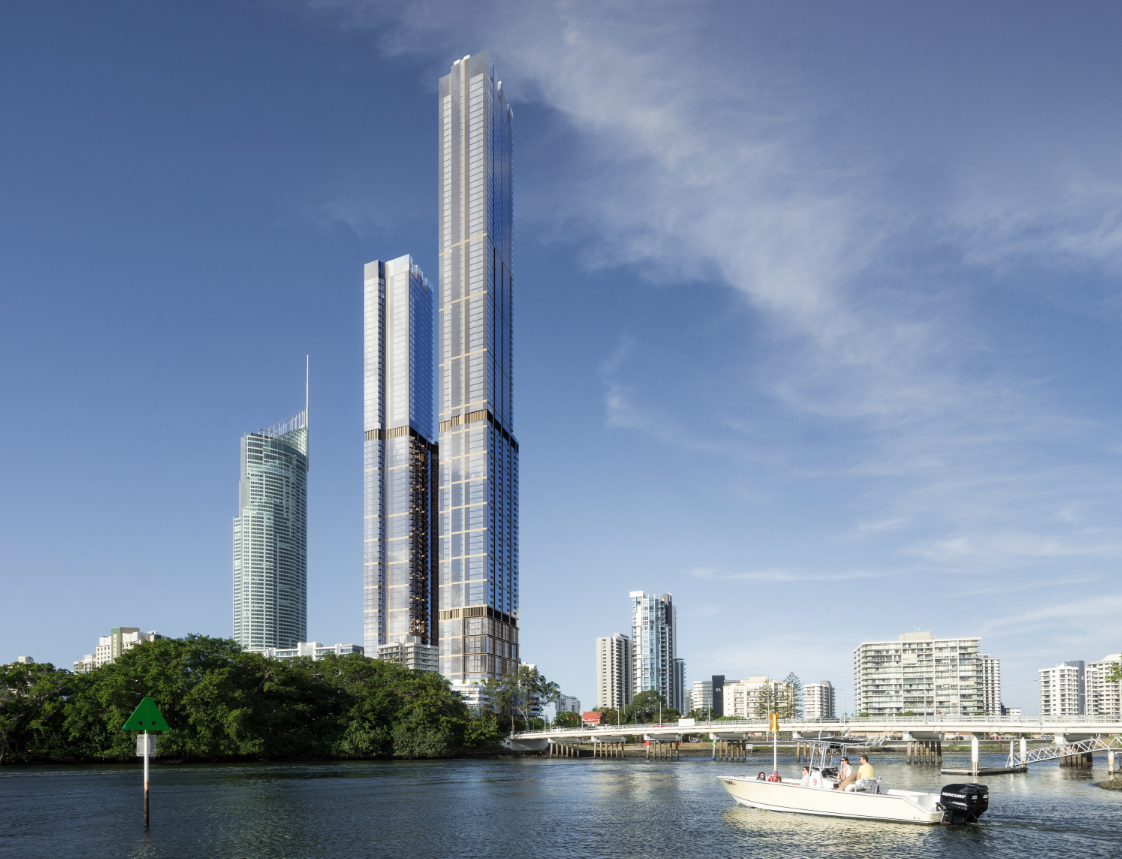 How did the Orion tower project come to you?

Mark Damant – Director, Woods Bagot: The opportunity arose via a selected, national, two-stage competition that Woods Bagot won after an intense design process. The client was looking for an internationally-relevant design that would put the project on the global map.

What does the centre include and what were the most important elements of the brief?

MD: The brief was for a twin tower form comprising residential and small hotel with a retail offering on the ground floor at street level. A unique and well-designed landscape on the podium for the residents was necessary in order to optimise the amenity for people who lived in the development.

What are the key points of inspiration behind the design?

MD: The design creates a powerful city-scaled urban space in a crescent form. A dynamic building, the towers appear to look different from different viewpoints around the city. The slender tower form has an intentionally graded texture façade.

What are you most excited about in regard to this project? What does it mean for Woods Bagot?

MD: While height is never in itself a driver, there is no doubt that working on super tall towers is a design challenge and one that Woods Bagot has developed some expertise in over a number of years with tall buildings around the world. 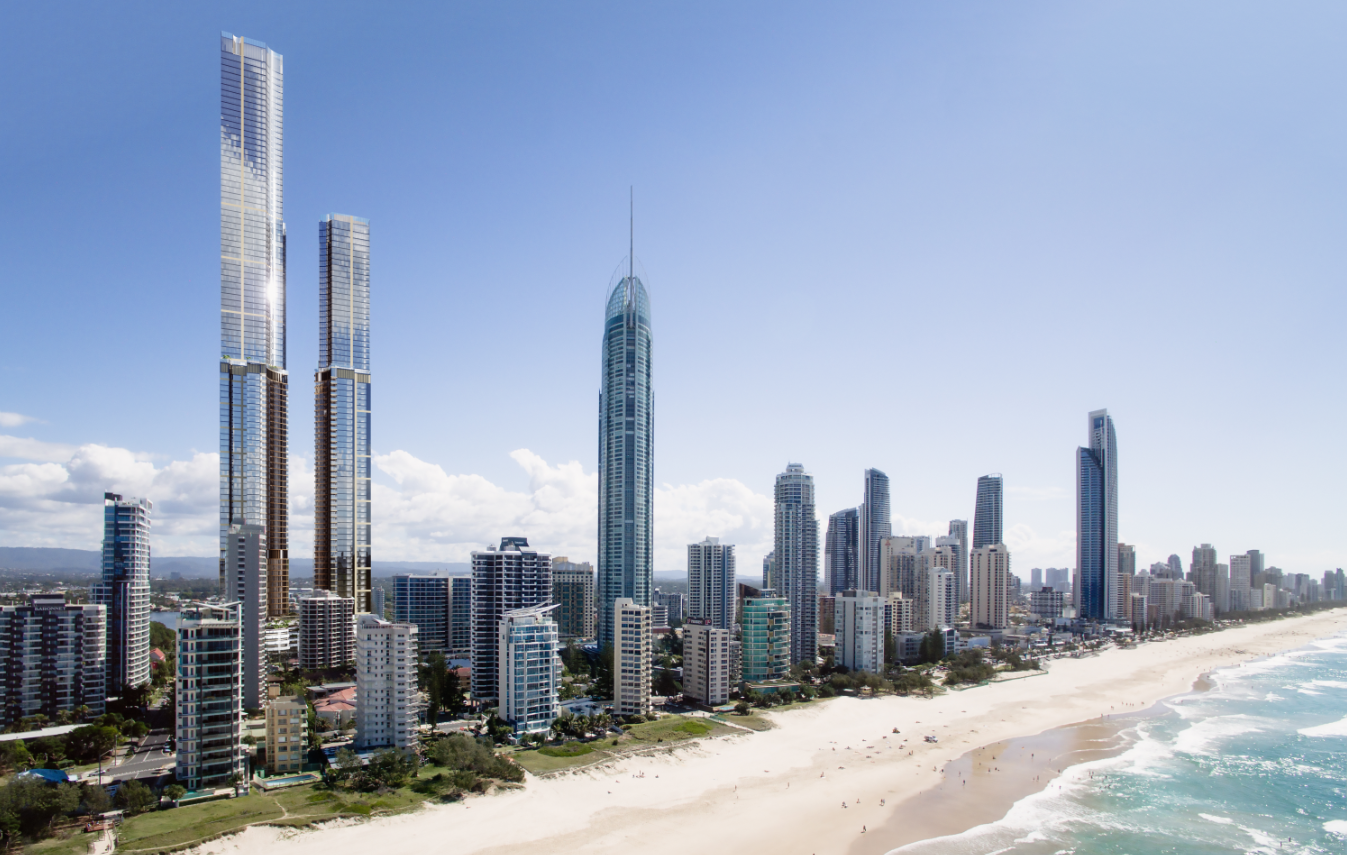 Bronwyn McColl, Woods Bagot Principal, said that the project is a “typology-pushing precinct informed by the customers’ desire for local immersion via a framework that encourages authentic integration with the community.” Can you elaborate on what the elements of the design were influenced by, and how they fulfil these customers’ desires?

Bronwyn McColl: Hotel travellers are seeking authentic experiences within a local context, rather than a generic hotel brand experience that could be anywhere.

The ground plan and podium is designed to celebrate the local climate and creation of community with a focus on living well. Health and wellbeing are more and more important to people with our limited time in the modern day. With this in mind, the top of the podium has been designed with wellness and the Gold Coast’s sub-tropical climate in mind.

Large open pools with a walking track adjacent to gym and yoga facilities are complemented by food and beverage offers that overlook the pool and open green space. The intent is for the hotel guests and residents, as well as the local community, to access the facilities, thus creating a communal precinct for all to enjoy.

How do you think the tower differentiates itself from the congested skyscraper scene that the Gold Coast is becoming?

MD: The tower forms create a giant urban space between them that will be memorable locally. As well as this, the façade design will look quite different as one moves around the city, creating varied opportunities for people to experience the form.

Perth’s central business district is the proposed site of a $1.85 billion World Trade Centre, designed by Woods Bagot. The towers will be 36- and 75-storeys respectively and will include commercial/retail outlets, residential and recreational facilities on 4.7 acres of land between the Perth and McIver train stations.

The proposal will now undergo a detailed assessment and will need to meet a number of specific requirements including demonstration of financial and technical capacity to deliver, subject to World Trade Center Association entering into a participation agreement with the State Government and dependent on the total acquisition of the desired land.

There are 330 licenced World Trade Centers in over 90 countries which operate under the WTC brand and are a major global employer. 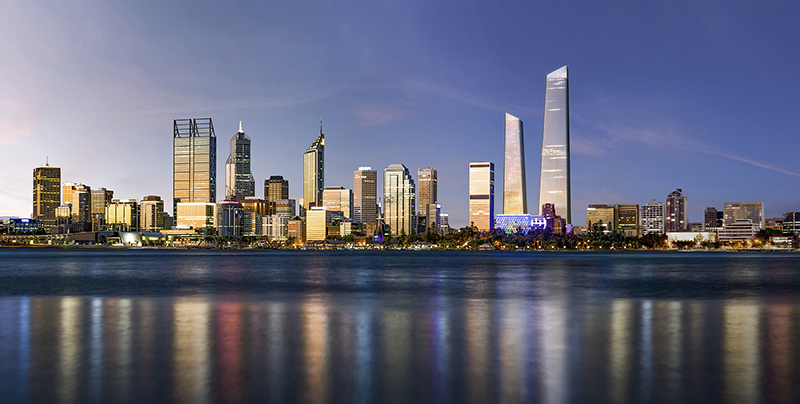 How did the World Trade Centre project come to you?

Mark Mitcheson-Low – Global Development Officer, Woods Bagot: We have been working with the WTC Perth client for several years, looking at potential sites that could be capable of accommodating the WTC program of requirements for a major WTC facility. As the Perth City grid has a finer grain than other cities with larger city blocks this was a challenge. Woods Bagot assisted in identifying the current position as a potential site.

What can you tell us about the design and how it looks?

The design incorporates a major program of mixed-use facilities over the rail reserve leading into Perth Central rail station. The design incorporates two towers that also have a mixed-use program of WTC offices, WTC Club, hotel and serviced apartments. The buildings are designed to be clean, elegant and lasting in their appearance and position in the city to reflect a strong symbol of business and trade.

What are the key points of inspiration behind the design?

The design approach has been to create a strong link for the city across the existing rail lines which currently divide north and south city precincts. The development itself repositions the centre of the city and forms a new public plaza on the deck over the rail lines. The development initiates a massive urban intervention and will be a transformational project shifting the future of the city development while regenerating parts of the city which are currently difficult to access. The plaza will provide retail and entertainment and is inspired by the urban impact it will have on the city at ground level.

What are you most excited about in regard to this project? What does it mean for Woods Bagot?

The WTC project will have a huge impact on the city and the economy of the city and state. It’s rare that a single project can act to stitch the city together, shift the centre of the city and create a new iconic development which will become the new postcard for the city.

Its social and economic impact, as well as the opening of the city to 330 other World Trade Centres globally, allows the economy to diversify and the city to become more connected as an international city of influence and significance.