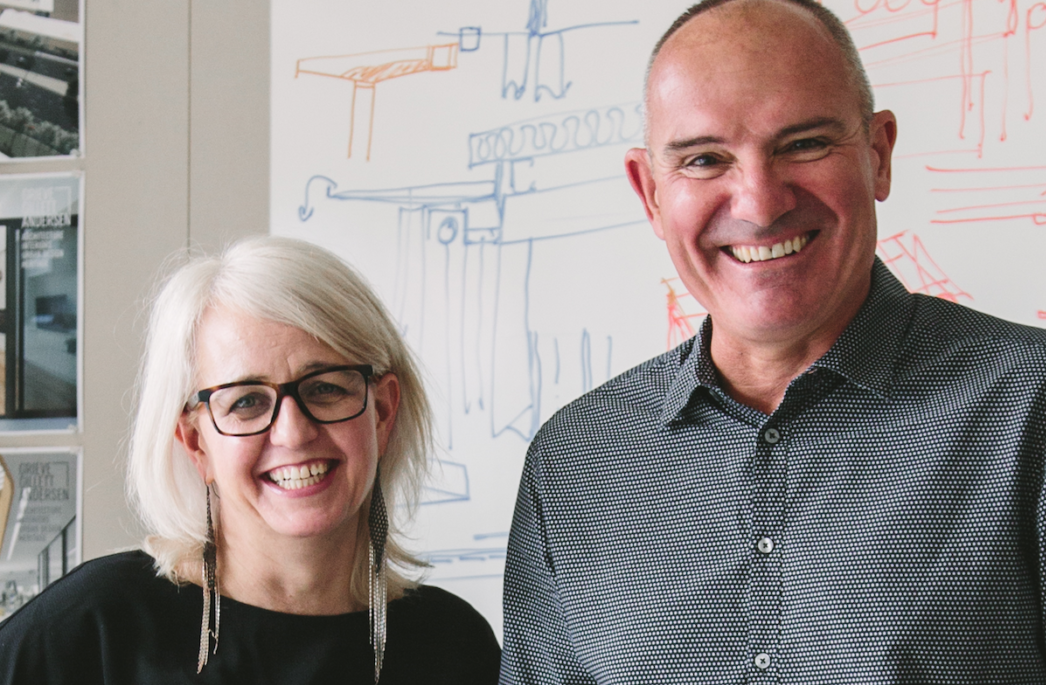 A great merger is like a great marriage, with two parties finding they are better together than they were on their own. But how do you find the one who will be the right fit? Paul Gillett and Dimitty Andersen of Grieve Gillett Andersen say their experience was very like a courtship. And so far it’s been a very happy marriage indeed.

Grieve Gillett Pty Ltd was formed when Paul Gillett (who had joined the company in 1993) stepped up to a directorship in 2000. And now it has evolved into something of a Cerberus model, with Gillett and Grieve joined by Dimitty Andersen, merging her own 15-year-old practice with the studio two years ago.

Many people will tell you that three is a tricky number when it comes to relationship dynamics – we all remember what Princess Diana said in that respect. But at GGA, having three directors seems to be working out very well indeed. This wasn’t by accident though. Gillett and Andersen say the key to executing such a successful merger was taking their sweet time to make sure they had done all the groundwork before they went ahead.

For Gillett, much of this groundwork has to do with aligning company cultures and modes of practice. His interest in these areas goes back to 1993 when he first joined Grieve’s business. It was with this move, after having worked for various firms in both Sydney and London, that he first felt he could make a difference and indeed be a company leader. “I always thought that I would work for other practices,” he says, “however, as I experienced how various practices worked, I thought perhaps there was a better way to do things or I could try some alternative methodology.

“I think it was seeing the way the staff were treated and respected,” he explains. “They were seen as a resource and an expendable resource, rather than being effectively a junior partner in the practice.”

Things were different with Grieve’s studio and as Gillett became increasingly invested in the way the business was being run, he was happy to take the next step. “Steve offered me a directorship, which was very generous of him. I chose to take it up at that time. The arrangement was that I would salary sacrifice over a three-year period, which would finance the purchase of that. It allowed me to finance it in a low-paying way. Again it was behaviour that was consistent with my belief in and desire to look at alternative ways to deal with things.”

After 15 years of this model though, Gillett and Grieve were ready to evolve again. Why? “We had identified a deficiency that we needed to address in terms of younger director-qualified staff,” says Gillett. “Dimitty’s name came up and Steve and I discussed it, and she was attractive to us for a number of reasons.”

Those reasons included Andersen’s notable success and multiple awards in the residential space. Thriving in this area implies a proficiency with budgets – “All clients are conscious of budget but more so domestically,” notes Gillett – but also dealing with clients who are emotionally involved and attached to projects “brings a certain complexity that is not present in commercial work”, he adds.

At the most fundamental level, Andersen being female was also a consideration. Gillett says they weren’t looking to practise gender equity from a deliberate or a proactive position, rather they always looked for the best and most suitable people on any project. But the fact that Andersen was a woman was the icing on the cake.

Again, the key to the success of the merger was patience. “We then had a sporadic discussion for 12 months, on and off,” says Gillett. Andersen wasn’t easily won over. “I kept waiting for them to put a foot wrong or say something arrogant or chauvinistic. After a year and a half, I couldn’t find a reason to say ‘no’.”

For Gillett, the process really was like a courtship. “From my point of view I was more interested in understanding Dimitty’s personality and her generosity of spirit, really. I think those fundamentals then drive a business outcome, and her work ethic as well.”

One of the most sensible tactics they employed was consulting an organisation psychologist, who interviewed all three parties and other senior members of the practice, preparing profiles on them, which “led to some interesting reading,” says Gillett.

From this Gillett and Andersen discovered a mutual tendency to withdraw in times of conflict. And everyone knew instinctively this wouldn’t be helpful if the new practice model was to succeed. “I would say that I have applied some strategies I learned from my mum in the business,” says Andersen. The mum in question had a Lebanese background and if there were ever disagreements between her four children, she’d get them all in the kitchen and not let them leave until the conflict was resolved.

“The other advice she gave, which we’ve actually used in various situations, is she used to say, ‘If everybody else is wrong and you’re right, you need to have a good look at yourself’!” laughs Andersen.

Gillett agrees that mothers generally know best. “My mum would always say, ‘Don’t worry about it. What goes around, comes around’,” he says, adding, “It was a valuable lesson because I think you always are accountable for your behaviours and you always need to be fair and reasonable, and if you are and if you treat people with due respect, you will most often receive that back.”

With their mothers’ advice acknowledged and accepted and having made the decision to go ahead, how did they handle the logistics? Andersen had the bigger challenge, as she had to put her office into temporary storage and move her two staff. One of the smartest things they did, she says, was spread her staff around GGA office, so they didn’t form a little silo but had to learn to integrate properly from the get-go.

Money was another big factor, says Andersen. It was vital to her that her staff retained all their entitlements. But there were deeper ramifications. “One of the key things for us is that, due to me coming on board, the practice had to completely restructure its financial model. That came at a cost and I’ve reflected on this. At no point have Steve and Paul said, ‘Oh God, that was so expensive.’ So that’s [indicative of] their overall attitude of generosity.”

The restructure took up to two years but slow and steady was the best way she says. “It’s been a really great outcome because it means the business model has been able then to facilitate growth and more shareholders.”

Prior to the merger, Grieve and Gillett’s business had grown, leading to a complicated arrangement with the space they were in. “Our business model at that time was very complex and needed resolution. Dimitty coming on board provided the impetus to do that,” says Gillett.

“It also then to a degree corrected our behaviour in terms of moving from what was a small business model to a medium to a large business model.”

Now the three directors make all the financial decisions jointly, although they have a finance manager, Dianne Beaven, to handle the details, while Janet Hiern is the business manager, dealing with such elements as contracts, HR and compliance.

For the directors, Andersen says around 20 percent of their time now is spent on the administration side of running the business, while Gillett admits it’s not his favourite part of the job. “I didn’t do architecture to do this,” he says. “I did architecture to actually design buildings and provide creative solutions to whatever the problem was. Having said that, there has been throughout my career an advancement through a series of decisions that I have made… so having made those conscious decisions I then recognise that the success of the business depends on me investing in that.”

Talking of future success, how are the three directors looking forward? Andersen says succession planning isn’t the term she’d use. “Identifying future leaders is what I would call it and then talking to them about equity in the business and growing the business in that way… Paul is 10 years older than me, and Steve’s 10 years older than that, so we’re constantly looking into the viability of the practice in the long term.”

Is she suggesting they consider adding even more people to this marriage? How very modern…