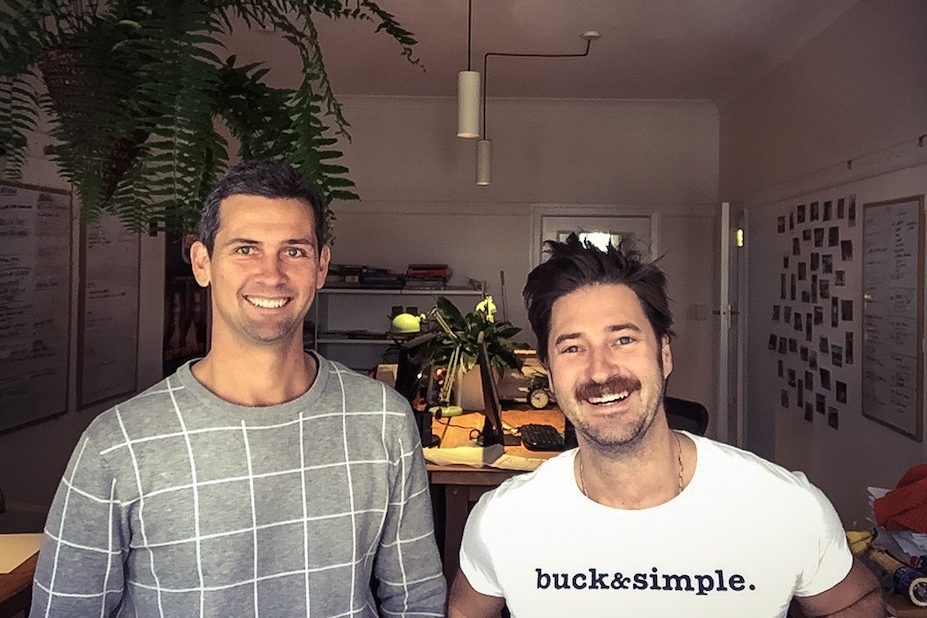 This week we meet Kurt Crisp and Peter Ahern, co-founders and directors of buck&simple. The pair discusses how details can make a project, taking risky, but great leaps, and the thrill of being free of plans.

ADR: Who/what/where inspires you?
Crisp: I like responsive solutions and design that almost invents opportunity. People like Peter Stutchbury, Richard Leplastrier, Drew Heath, James Russell…they find ways of accentuating something that previously went unnoticed. What I find most inspiring is seeing great design when it’s in use and familiar to the person using it. I love seeing someone entertain in their kitchen, or a bartender who can hold a conversation while making an order, or a tradesperson who doesn’t take their eyes off the problem while reaching for their tool belt. To me, great design is proven in its ability to be an extension of the person.

Ahern: Personally, it’s seeing passion; seeing people who are driven to achieve whatever their goals may be.

Architecturally, I gravitate towards process-driven, craft-oriented design. I’m often found staring in awe at that Scarpa detail, or Zumthor shadow across a stone wall.

What do you like to do outside of work? What is your free time filled with?
Crisp: I have four kids under seven-years-old, so free time is rare. When we can, we get out of the house. ‘Travel light and move fast,’ is what I tell my kids. That applies to being light on planning too. Make up the way as you go. We end up at the beach, or on a bush walk, or local shops, it doesn’t matter where, but it’s nice to be free of a plan.

Ahern: I’m very big on travel, making sure I get away as often as I can, both at home or overseas. Usually once a month. Also, I’ve realised lately I’m a bit a motorcycle nut. Probably not so much a surprise to the people around me though. For me, they represent a perfect coalescence of design, engineering, passion and freedom, so often I’m found doing something around them. Other than that, anything water-based, I’m in.

Every creative puts a part of themselves into their work. Which of your projects has been the most important to you and why?
Ahern: Probably not so much a single given project, more the individual elements of each. Often it’s the little detail here or concept there; that cool idea you got the client to agree to, that component or part of the program that brings a sense of play, something that makes you stop and say, ‘Cool’. At the outset of a project, we look at the brief and see where those elements can occur, that little bit of awesome. In the office, we often look at a design and see how we can incorporate a bit more ‘buck&simple’ throughout. I’m also a major sucker for a green roof.

Crisp: Yeah, I wouldn’t say that a single project represents my design entirely, but there are definitely spaces and details that I’m really proud we have created. The framed view from the front door at Waterford, the environmental responsiveness of ARMW house, the view over the pool at Whyte house and the light and shadow interaction that happens in my own home, Casa Crisp.

What has been the most inspiring and/or defining moment of your life and why?
Crisp: The day my wife said ‘yes’. I wasn’t sure she would, but I knew I had to ask. It was the perfect combination of mad enough to say yes and rational enough to make it work.

Ahern: Funnily enough, it would have to be the creation of buck&simple. We were looking for a way to break the 9-6 grind and get that more ‘custom life’, and to be honest the transition in lifestyle, creativity and freedom it has afforded has been quite profound.

What is your favourite place or space in Australia and why?
Crisp: Little Smoky Beach, South West Rocks. There is so much beautiful coastline in Australia, but this one particular spot I’ve been camping and surfing at since I was young.

Ahern: I’ve got my list of a few little spots I’ve discovered in Tasmania. For me, Tasmania has everything I look for, a mish-mash of untouched nature, pristine and rugged.

What would you say has been your proudest moment, either career-wise or otherwise?
Crisp: When I talk about buck&simple and the people in our team. I’m very proud of what we are able to do and I’m excited that we have so much we’re going to bring.

Ahern: Given the way I got there, possibly achieving my architectural registration. Other than that, it’s actually very rewarding having those small daily moments seeing the business build and grow.

What are you working on currently and what are your goals for the future, either personally or professionally?
Crisp: We’re working on a new surfing holiday house and about to complete a home we started designing in 2015, among other things, so it’s great to be bringing it all together. We’re also taking on some exciting hospitality projects which really bring a great momentum to the office.

Ahern: Yeah we’ve got a real mix on the books at the moment, residential, medium-density and commercial. It’s great to get that diversity.

In the future I’d like to see us get to a position where we have that luxury of time for more design; it’s easy to get caught up in the day to day of the job so more time for contemplation and research would be nice. We just have to keep striving for awesome.

We’d love to hear your inspirations and experience in the architecture and design community. Simply email adrteam@niche.com.au with a little introduction of yourself to be featured.