Home • Mezzanine • Emerging from the darkness: the Shadow House 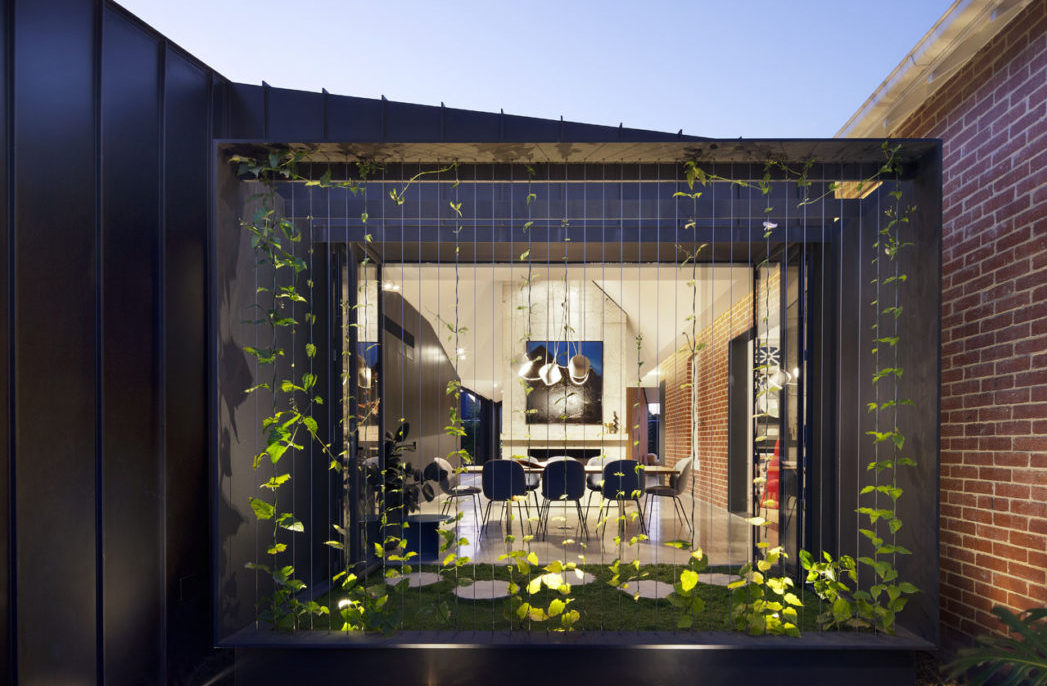 Nestled in the heart of this area is the Shadow House, a two-bedroom, two-bathroom home with a Heritage base, designed for a couple and their dog. 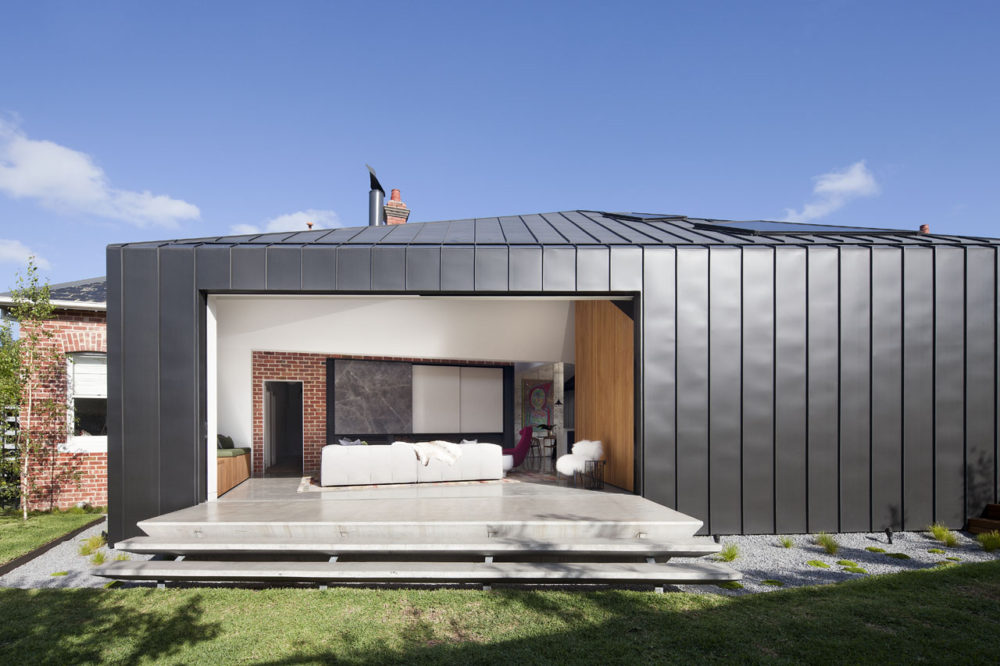 The brains behind the home’s architecture and interiors, Matt Gibson of Matt Gibson Architecture and Design and Mim Fanning of Mim Design, experienced something of an aligning of the stars, kismet perhaps, in their collaboration and pairing with the owners of the home – resulting in what can only be described as a stunning fusion of design and architecture, a seamless integration of old with new.

The home’s original dwelling was a Heritage construction with an ’80s addition, which contained a bank of north-facing bedrooms and south-facing living areas, overlooking a garden in shadow. “This is the exact opposite of what you want,” says Gibson. 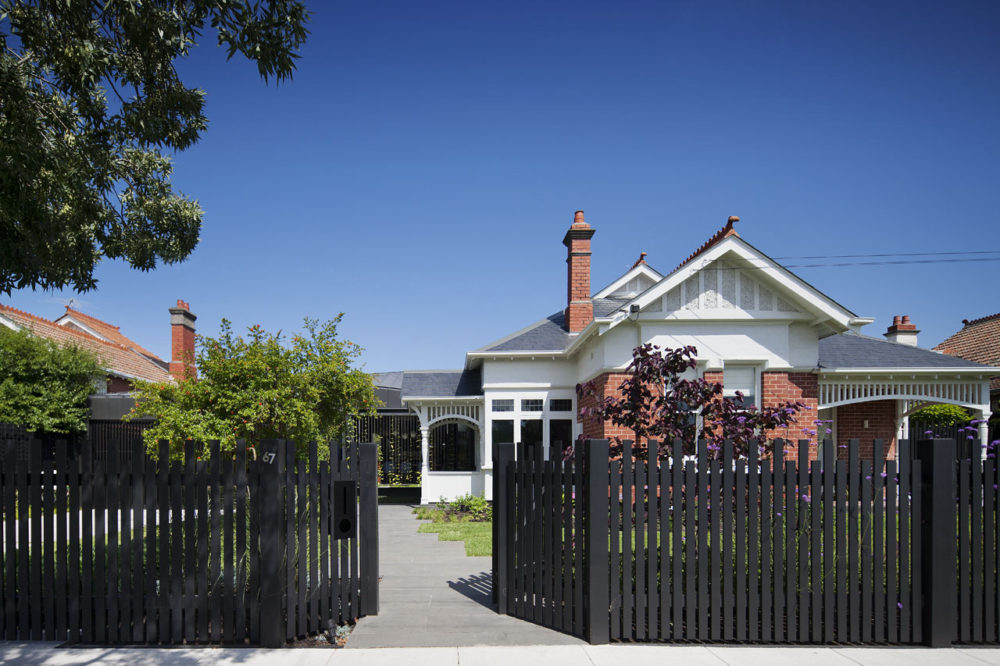 He removed the back end of the home and hugged the rear south side of the building with the new extension. “That then means you get all this lovely northern light into the living room and rear garden,” Gibson says, “and the rest of the spaces that are hugging the south side feature a glass connection, so light trickles in here too. You’re left with lovely sunbeams coming through onto the concrete floors in the middle of the day.” 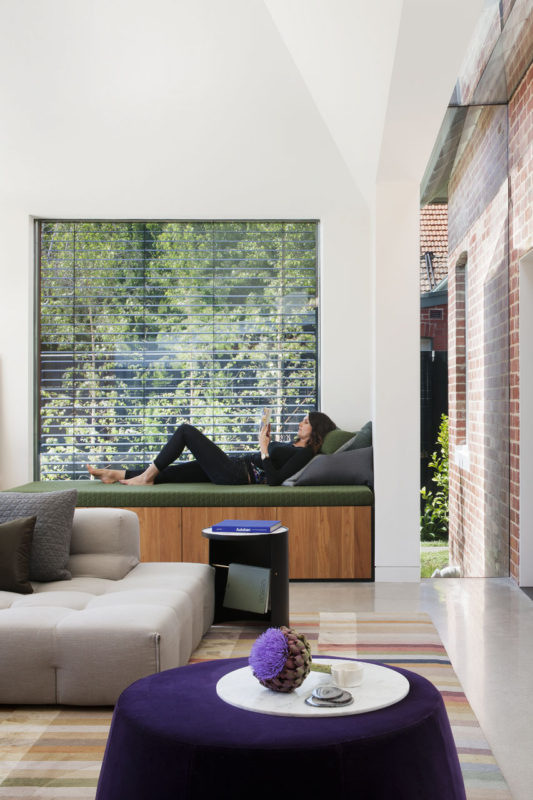 Gibson also worked extensively with a Heritage consultant, approaching the project with an aim to maintain a distinction between the existing Heritage aspect of the home and the new addition.

This resulted in a deliberate disconnection between the two, in delightful instances such as the glazed ceiling light that runs around the edge of the home at the intersection of contemporary and Heritage. “We were keen to enable a soft connection between new and old, and that kind of follows through the house,” Gibson says. “The ceiling light creates this clarity between Heritage and contemporary and also brings light down onto the textured walls of the interior.” 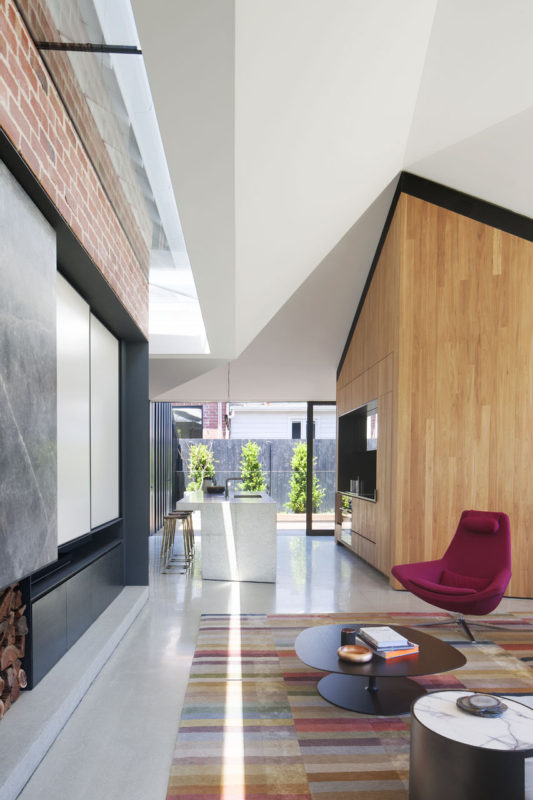 While the existing building largely comprised brick, Gibson constructed the new aspect in zinc cladding, timber and concrete. This addition is seen as a recessive folded form from the street – set back, subordinate and essentially ‘in-the-shadow’ of the Heritage structure. Rather than replicating and competing with the character of the original house, the new works are clearly distinguishable, allowing the existing Heritage fabric to take on greater clarity. 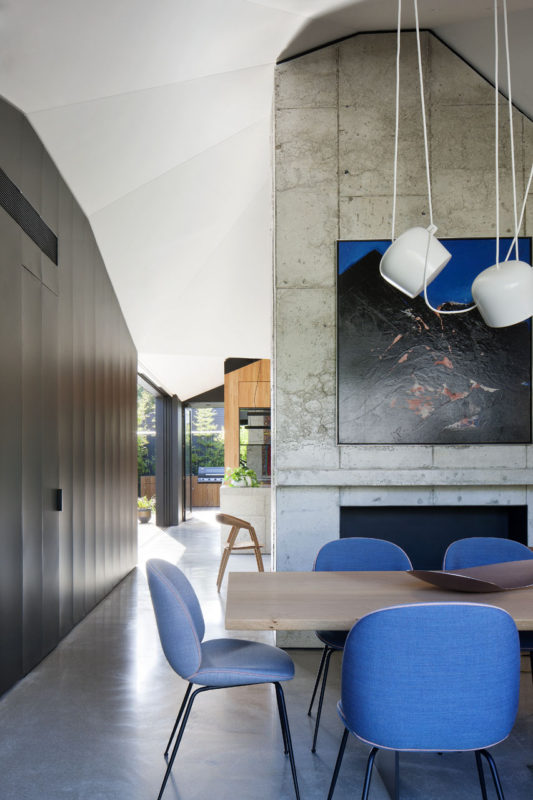 Meanwhile, in the interior, Fanning worked to gain the sense of proportion that was featured in the existing part of the building and carry it through into the rest of the house. “Often when you look at Edwardian houses,” she says, “the scale of the individual elements in each room isn’t so grand, so we had to look proportionally at how we could make sure joinery elements, walls and feature details were actually at a scale that balanced off the architecture that was taking place within the new part of the home. 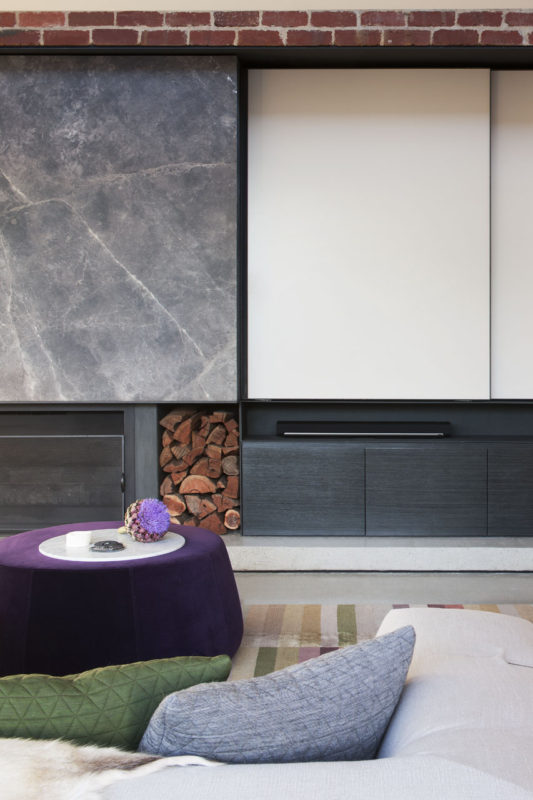 Fanning also worked hard to ensure that each room, particularly within the Edwardian part of the house, actually had a sense of purpose and felt comfortable for the clients’ personal uses.

This considered and bespoke approach resulted in one of the rooms becoming a ‘salon’ – a space in the middle of the house that is a home for the clients’ art, an intellectual space where one can sit down for a glass of wine with friends to discuss politics or the events of the day. 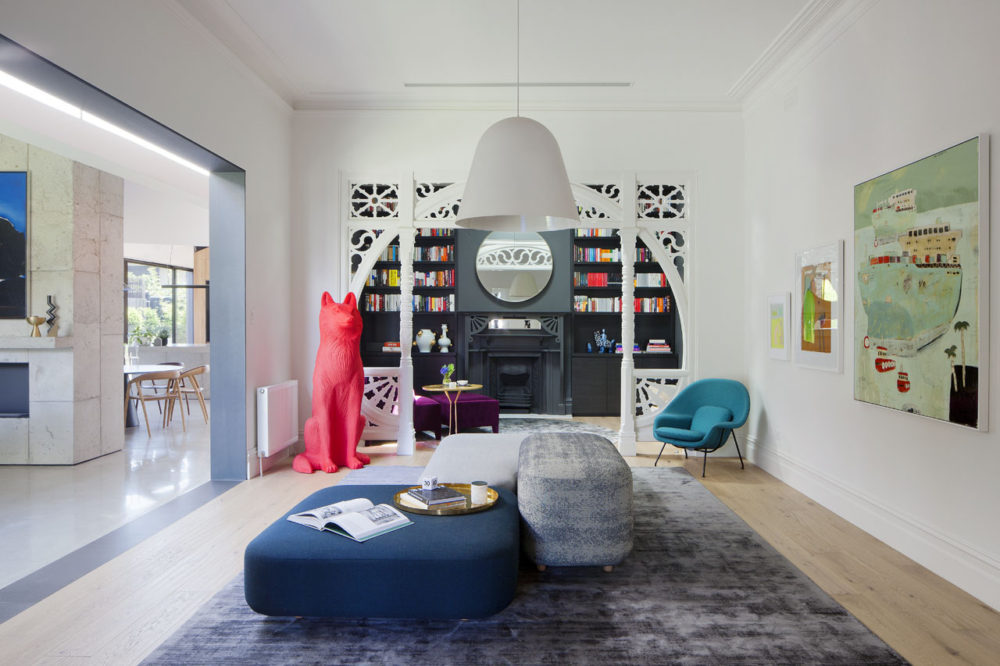 “The client has a number of books and loves reading, so that room was really about him being able to do that there too,” says Fanning. “He doesn’t watch a lot of TV; he reads a lot or plays on his Galaga machine, which is in the back room.”

A project as successful and impressive as the Shadow House does not come to fruition easily, however. It took input, passion and collaboration from all involved – the whole team worked simultaneously alone and together like cogs in a machine to achieve the final result. 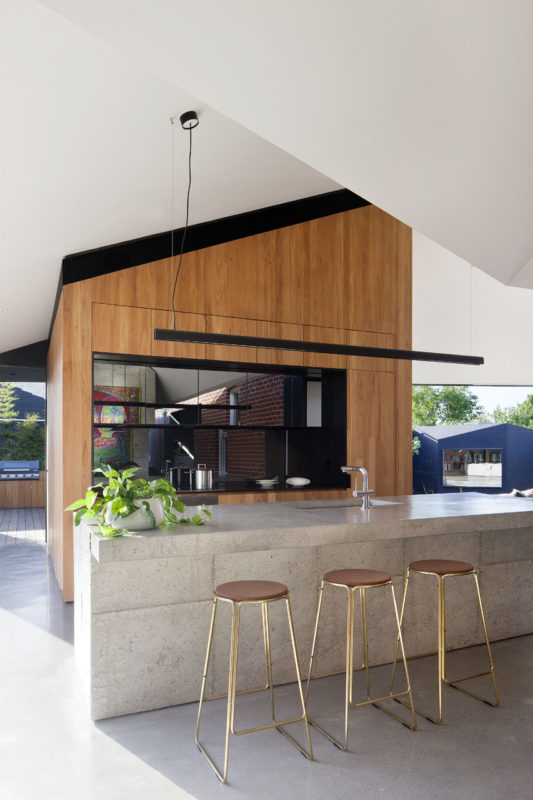 Gibson and Fanning met eight years before uniting on the Shadow House, but it wasn’t until 2011, when they judged the DIA’s Interior Design Awards together, that they really got to know one another and became friends. The pair would sit next to each other at the dinner table during the judging period, Gibson says, and they were always the last to leave, they had such a good rapport.

In the Shadow House project, their combined talents managed to collide with something of a rarity – a client who was completely and utterly active, engaged and collaborative. 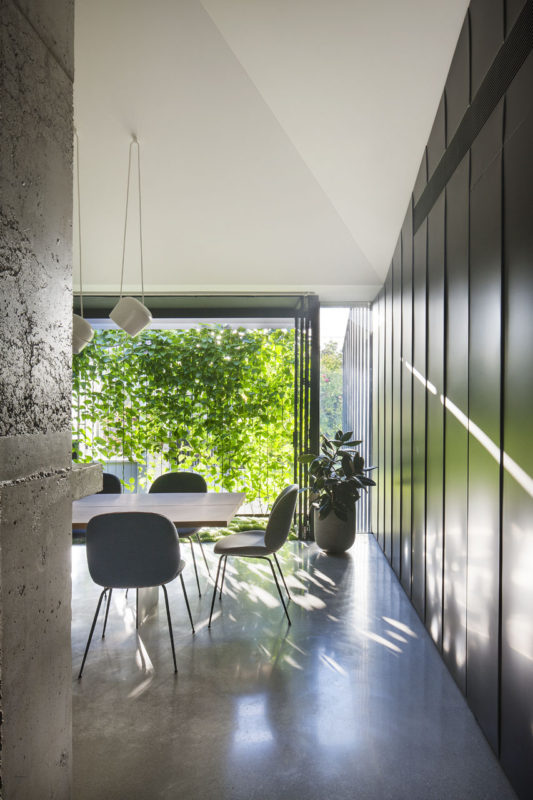 “They were interested in every single dimension, all the joinery, right through to the finishes and the final curation of every furniture piece,” Fanning says. “They hand selected the timber with us for the table and helped choose things right down to the Snoopy lamp; they were interested in the tiniest details, things like it being a limited edition number, who the designer was and what year it was designed. They really treated it like a massive educational experience.” “They were almost part of the design team themselves,” Gibson adds.

“I would say they’ve been one of our better clients, perhaps even our best client… They really invested in us, and by doing that you get the return investment as well.” 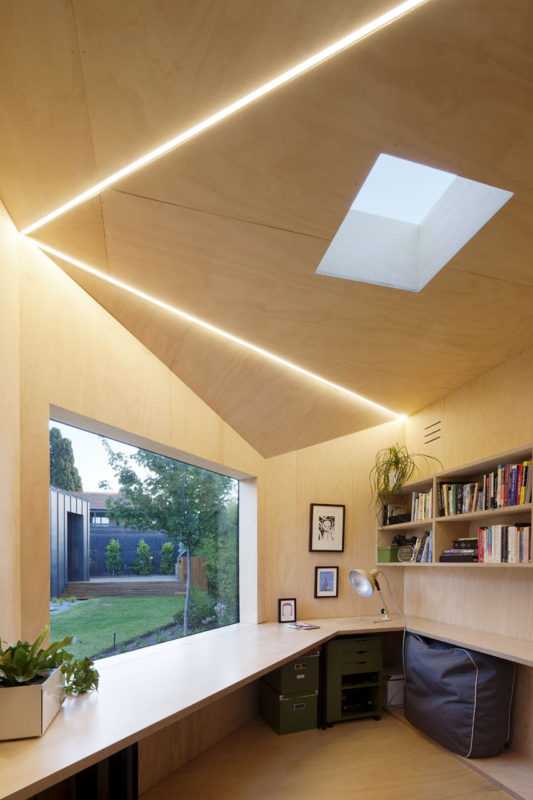 “Not to mention the builder,” Gibson says. “Some builders just construct what you draw, but Warwick Matthews (Warwick Constructions) was very involved. He would come up with ideas beyond what we were doing to add extra impetus to it.”

The pair also praise the work and collaboration efforts of Ben Scott from Ben Scott Garden Design, who took on the landscaping of the Shadow House. “The garden turned out brilliantly, and I drive past nearly every day and the garden looks better every time,” Fanning says. 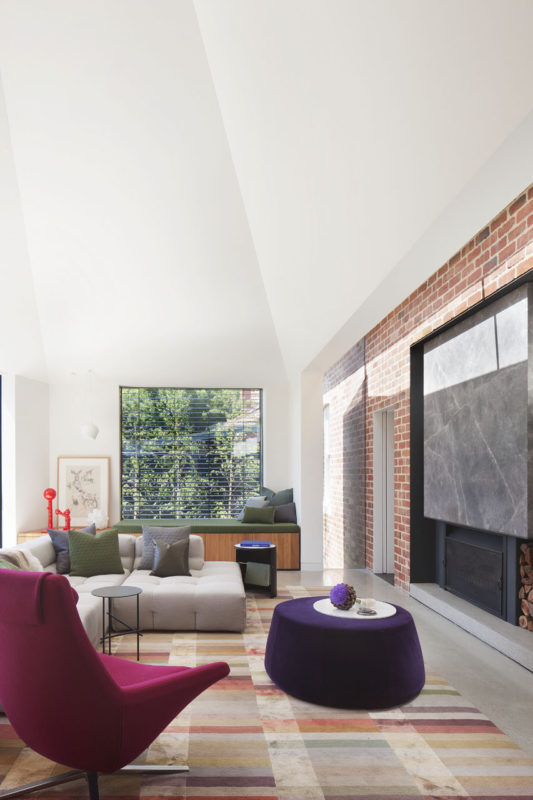 “You always want to be proud of your work, so for me, to have the experience of working with a great builder and landscaper, a great client and a great architect… For all those stars to align, that’s a real rarity. When you can come out of a project and say ‘that was really a great experience’, that’s a thing you aim to achieve in your professional career.

“It wasn’t about just one element of the design, but it was about collaboration and working together to get the best results for the client,” Fanning concludes. “Everyone really gave all of themselves for the good of this project.”

This article originally appeared in MEZZANINE #8: The Collaboration Issue. Get your subscription to MEZZANINE here – or digitally through Zinio.

Like what you see? Take a look at more of Matt Gibson’s work – the Concrete house – here.