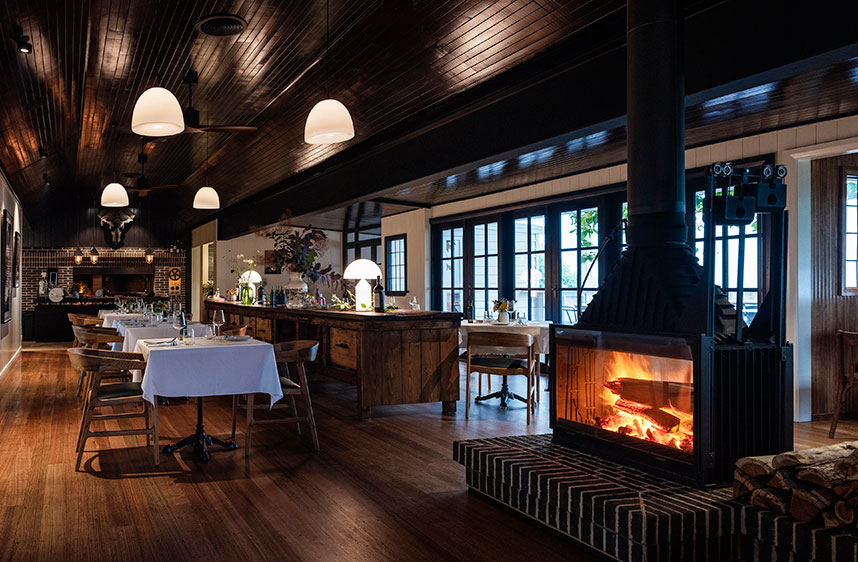 In spearheading the bespoke interiors of Osteria Tedesca, COX director Patrick Ness proves you can teach an old practice a new tune.

Ten years ago, Brigitte Hafner sat down and wrote a manifesto to one day cook somewhere that had heart, wine, music, nature, architecture, stories, theatre and joy.

In a journey that took her from Guy Grossi’s kitchen to Gertrude Street Enoteca, she found herself in a little weatherboard cottage, behind a carved wooden door shaped like an antique French trencher, shelling peas at a 10,000-year-old blackened table in front of a brick hearth named after her mother.

In other words, she found her haven in Osteria Tedesca, opened in Red Hill in December of last year and designed by COX Architecture.

An unexpected choice? That depends on whom you ask. We’ve come to expect that the country’s biggest firms will stay in their lanes. COX recently completed Melbourne’s Rod Laver Arena Redevelopment, Perth’s Optus Stadium, the National Maritime Museum of China.

It helps that Hafner’s husband just happens to be Patrick Ness, COX’s incurably pleasant Melbourne-based director, but at the same time, it’s irrelevant. Osteria Tedesca was a pilot project for the venerable architecture firm. It was confirmation, not a test, that one of the country’s biggest outlets could turn its hand to something bespoke.

“Like your writing, when you approach a project where you’ve got connection, where it means something to you, there’s more of you than just the words. I think that’s the key. Whether it’s a beautiful article or a book or a restaurant, you have to really engage with it personally,” Ness says before a sea of books in his home study.

“Because we expire pretty quickly.”

Forgive Ness’ momentary fatalism. He is speaking to us on a rainy afternoon at the very start of Melbourne’s second lockdown. He’s at his country home and the video call keeps cutting in and out as if the internet connection is too weak to keep up with Ness’ enthusiasm. But the warmth that is at the very heart of Osteria Tedesca comes across loud and clear.

Ness dreamed of a place that had “40 best seats, each with a lovely quality about them”. It’s difficult to reconcile his passion. This isn’t how practice directors in their 50s are supposed to speak.

“I have always believed that architects, regardless of their age or status, need to be not white collar or blue collar, but grey collar. Somewhere in between, where we’re both professional and trade because they’re in a dance together.

“Architects that have never built anything, never put their hands on something, can’t come onto site and make commentary about how brick walls are done or how timber’s put together.”

Ness made Osteria Tedesca’s French proving bowl-inspired door himself, bringing colleague and amateur jazz musician William Cassell along for the ride. And COX encourages its staff to get their hands dirty. They have an area especially for it. It’s called the Guild and it’s where you can take the pen off the paper and actually make something.

On the Pavlovian response of COX and large public works, Ness is nostalgic.

“It wasn’t always like that. Philip Cox, who’s a great friend and mentor, his early work was really domestic, it was smaller, and he really learned about timbers and craft and all the rest.

“Then I think he became very successful in larger public work. I also always wanted to do larger public work, not because of ego or scale, but because there’s an ethical and moral quality to them. If you design things that most of us have to use every day, be it a sports ground or a train station, you’re having an impact on making it just that bit better.

“Also if you’re given five million to do a house, a trained baboon can do that.”

Ness, and consequently COX’s, foray into smaller bespoke projects isn’t so much a deviation as the director’s way of showing his colleagues that “design is scaleless,” he says.

“It takes a lifetime of knowledge to put pen to paper to design a building. Osteria Tedesca was a chance to balance the perception that we do these larger things that are of scale with the process of doing a very intimate thing at the same time with some of the same qualities.”

“A large project is like classical music. It’s linear, it’s got a time-frame, it’s very methodical, but executed with great skill.

“Tedesca’s more like playing jazz. It’s a bit impromptu. It has faults, like us humans. It’s perfectly imperfect,” says Ness.

“There are risks you take by introducing new techniques and new processes and new ways of thinking, all of which have the ability to really enhance a project, but can also blow out time-frames or cause other contractual issues.”

So the challenge now is figuring out just how COX can dance the same way as Tedesca does on larger projects, and how to bring a big group of stakeholders on board with your vision.

“These larger projects need to be filled with meaning. You need to emotionally respond to them just as you would with a smaller project, but in a different way. They’re bigger and there are different things going on, but that’s what needs to happen,” explains Ness.

“You need to have a level of care and attention to what’s going on. It’s on a different scale, but there’s no reason you can’t get the same feelings you can get in the Tedesca dining space in a larger performing arts complex.

This article originally appeared in inside, on newsstands and available online now.

COX Architecture recently teamed up with Hecker Guthrie and Jack Merlo to design a “new normal” office in a boutique commercial office building on Little Collins Street in Melbourne.