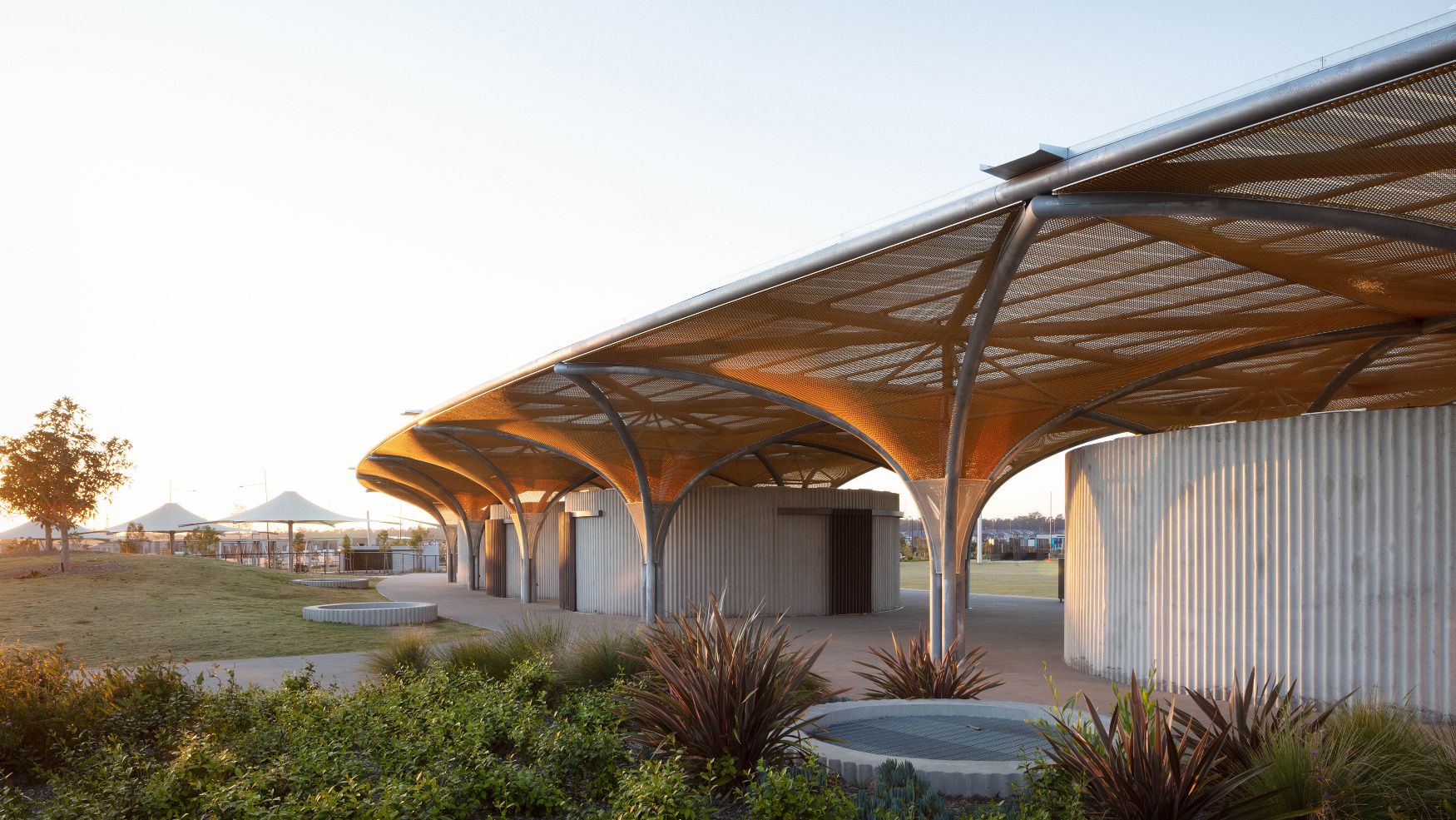 The project took out the Robert Woodward Award for Small Project Architecture at the 2020 New South Wales Architecture Awards this week, where it was praised for its “ephemeral and playful” character and role as an “anchor point” for the new local community.

Described as a “raw structure, straightforward in its expression” by CHROFI, the pavilion’s design stemmed from envisioning local community sports teams preparing for their next game under the “dappled light of a living canopy.

“The pavilion offers the experience of getting changed under a tree while providing the privacy, security and amenity of a bespoke community building,” says CHROFI.

“We explored the idea of a structure that creates a unique spatial character internally, while becoming an abstract, recessive landscape element externally.”

The Marsden Park Amenities project is part of a larger, shared community space within the rapidly developing north-western Sydney suburb. CHROFI won a competition to design the amenities building.

A custom gold coloured Kaynemaile mesh was developed for this project to “bring some fun” to the predominantly grey, steel structure.

CHROFI worked with the New Zealand-based architectural mesh company to develop 64 triangular shaped pieces that were fitted to the inner forms of each of the unique tree-like structures that support the building canopy.

The mesh was paired with a “robust palette” of galvanised Fleetwood Urban steel, concrete and ceramic tiles.

The shape of the structure frames its surrounding with the “gentle curve” of the pavilion embracing the sports oval, setting its radial grid.

Undulating concrete walls enclose circular spaces that are open to the air yet protected from the wind, rain and sun by a sweeping fibreglass roof with generous overhangs.

“In many ways, the project’s architecture is expressed in the negative volume between the canopy and the ground plane,” says CHROFI.

Choi adds that it’s the pavilion’s ability to blend into its landscape, designed by JMD design, that makes its such a success.

“My favourite part of the project is the integration with the landscape.

“The seating edges to the playing field, carefully located pathways and rain collections, all of which help stitch the architecture into the setting.”

CHROFI designed the pavilion to be much more than just an amenities building, with the goal of creating something that would represent and serve suburban community in Marsden Park.

“We wanted a structure that has a civic quality, embodying a sense of shared community pride and contributing to the community’s local identity and sense of place,” says CHROFI.

“The aim was to provide more than just shelter and utilitarian amenity, but also an element of joy and delight.”

CHROFI was founded in 2000 by Choi Ropiha after he won an international competition to re-design the TKTS booth in Times Square, New York.

The Sydney-based practice is known for its institutional architecture, and has designed a ‘public living room’ for the community of Maitland and a ‘hovering cube’ for the National Botanic Gardens.