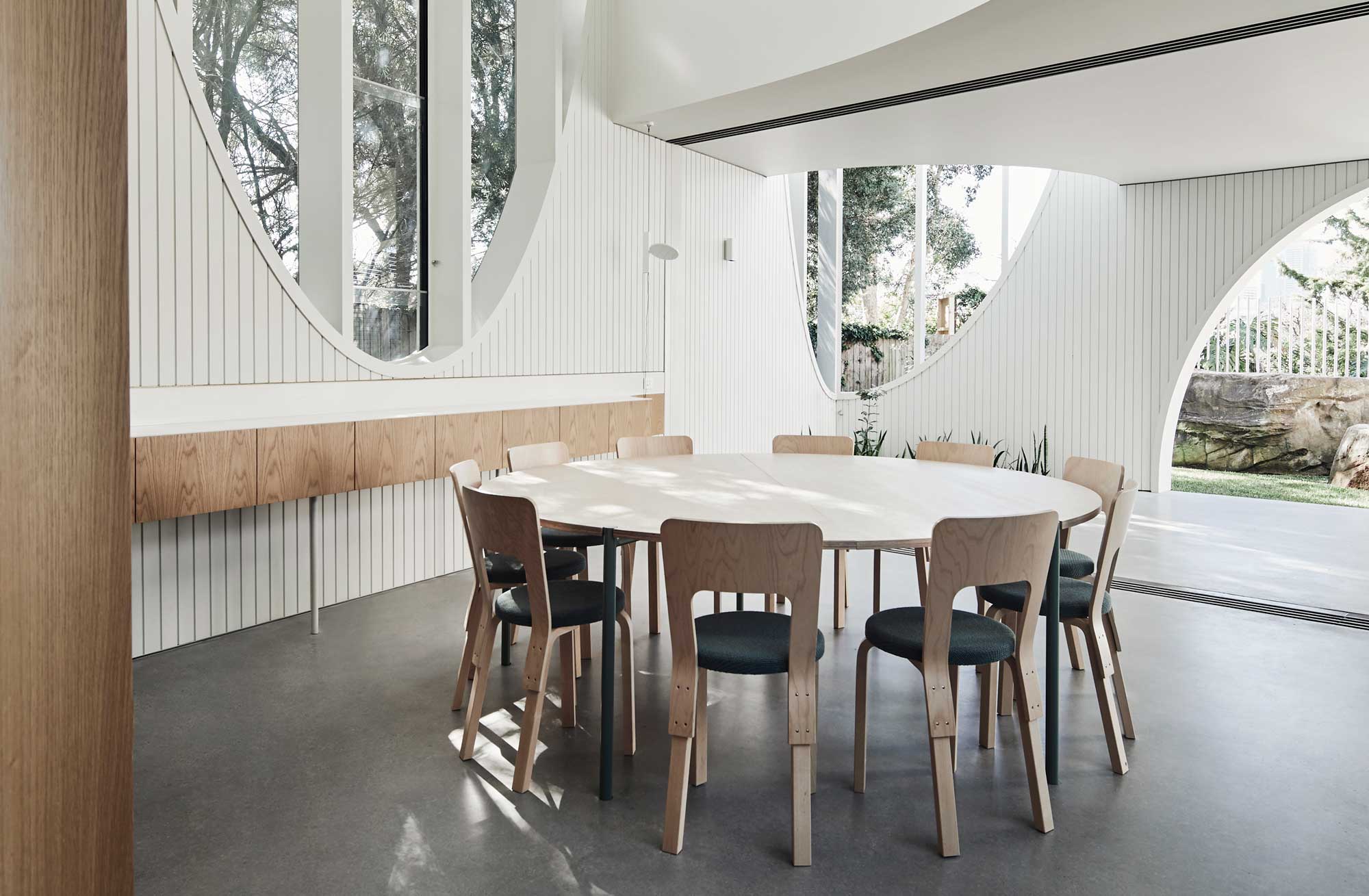 Chenchow Little has created three-dimensional internal voids with expansive arched windows in this family home in the inner Sydney suburb of Glebe.

Known for its Victorian terrace houses and narrow streets, Glebe has small allotments and a high density of housing in comparison to other Sydney suburbs.

The site for Chenchow Little’s Glebe House is overlooked by a Victorian terrace on the south and is elevated above a sandstone cliff face and 1980s public housing to the north.

The Sydney studio demolished the existing dilapidated cottage on the site and replaced it with a compact two-storey dwelling with four bedrooms.

“The client was particularly interested in a home with lots of light.  They are patrons of the arts and wanted a sculptural house that was still functional for family living.”

The design for the dwelling sought to maximise the available space on the small site within “stringent” planning controls and “considerable” site constraints.

The envelope of the building was shaped by the simple offset of the minimum setback controls for each frontage and the height was limited by the view-lines from the windows of the neighbouring dwelling.

“Our key challenge for this project was typical of most inner city sites – how to get light into the centre of the floor plan through the relatively narrow side setback zones, while carefully framing views out, to avoid the closely sited neighbouring dwellings,” says Little.

Chenchow Little settled on a home with a flat roof and wedge shape that replicated the geometry of the triangular-shaped block.

“We wanted to establish a spatial strategy, which was adequately flexible to allow us to adjust, push and pull as required to achieve the project aims, while responding to the various conflicting parameters,” says Little.

Natural light was brought into the home through generous arched openings, which also reference the arched openings and entrance porticoes of the neighbouring Victorian terrace house.

The shape of the windows were also designed to maximise the views of the Sydney cityscape.

“We realised that the arched geometry could help us frame and edit views of the surroundings,” says Little.

“An upturned arch focused views to the canopies of trees around the site, while screening the neighbours’ windows, ugly boundary fences and the street at the lower level.”

Three-dimensional internal voids were created by aligning the arched openings on the elevation with arched cut-outs in the floor plate, drawing light into the centre of the home and adding to the sense of space.

White-painted vertical boarding are used inside and out to “replicate the materiality” of the traditional cottages of the area.

The arched windows are made from vertical timber mullions to “reinforce the verticality and rhythm” of the cladding and help to “abstract the facades” of the dwelling.

The mullions have support for climbing plants and the windows were left unglazed.

Inside, the material palette is consistent to “increase the feeling of spaciousness” – Little’s favourite feature of the project.

Furniture selection was kept to a minimum with a custom dining table by JP Finsbury and custom master bed by David Muston, as well as a braid rug from Armadillo & CO. nd Nest side tables by Adam Goodrum.

Founded in 2004 by Tony Chenchow and Stephanie Little, Chenchow Little is an architectural and interior architecture practice in Sydney. The practice was also behind BresicWhitney’s office, housed in an industrial warehouse in Rosebery