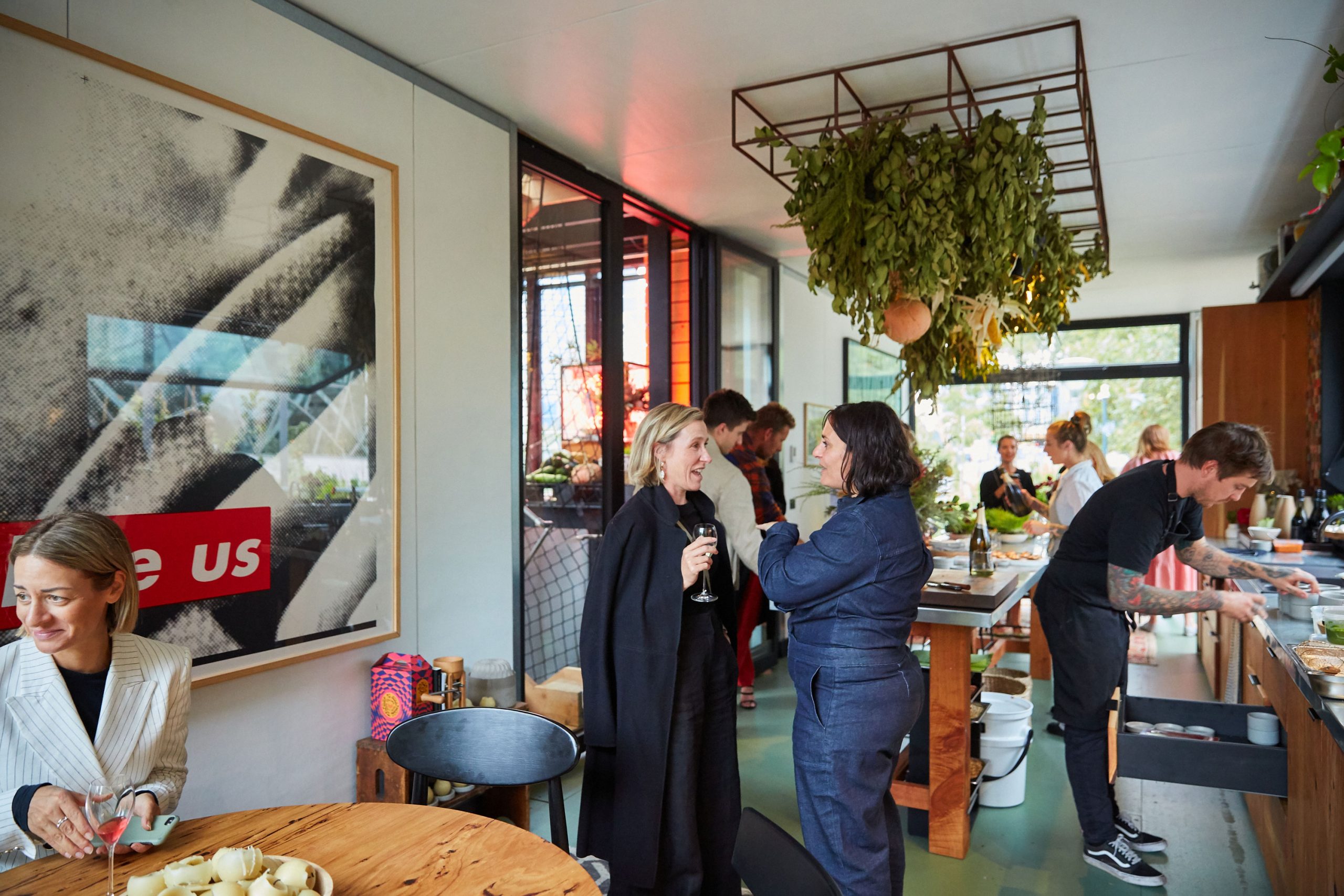 Designer, floral artist and ‘no waste’ advocate Joost Bakker’s latest greenhouse in Melbourne’s Federation Square is 25 years in the making.

The 87-square-metre Future Food System home on the banks of the Yarra River embraces a zero-waste approach to living and is the fifth iteration of Bakker’s Greenhouse project.

Residents, chefs Matt Stone and Jo Barrett, will be eating and serving only what is grown inside the house until the middle of this year, when the entire project is moved to Joost’s hometown in Monbulk and gifted to his mum as her new home.

“What I tried to do is create a home that doubles as an ecosystem,” Bakker tells ADR.

“I’ve tried to use materials that are natural and nontoxic and contain no fire retardants. The building could be classified as an organic building, if there was such a thing.”

The pop-up home and urban farm was designed to demonstrate the potential of our homes to provide shelter, produce food and generate energy in an urban environment.

From the black corrugated steel and plant-filled exterior, the home’s entry features a large-scale mushroom wall. Hot steam from the shower is funnelled through the wall, creating a humid environment for the mushrooms to thrive. In turn, the mushrooms create carbon dioxide, which is fed back out into the atrium for plant life.

Beside it, an aquaponics system produces mussels, yabbies, barramundi and freshwater plants.

While on the floor, green and black tiles by Saddler Tiles are made from concrete poured onto polished stainless steel. The concrete itself is made by replacing sand with crushed recycled wine bottles and is recyclable.

“The reason I wanted a concrete floor is because I’m obsessed with earthing,” explains Bakker.

“If you walk on the beach bare feet or you walk in wet grass, you’re connected to the earth’s magnetic field. You’re grounded and you can’t have inflammation.

“Concrete is also a great conductor. We laid copper wire before we grounded it and it worked. Wherever you stand in the house, you’re earthed.”

Through the atrium are two bedrooms with floor-to-ceiling windows and felt curtains made from German raw wool. Bakker teamed up with Country Road for all the linen, kitchenware and accessories used throughout the home.

The lights are a reworking of one of Bakker’s most famous projects, which he did for the Heide Museum of Modern Art redevelopment in 2006.

Venture outside and you’ll find a nature corridor filled with plants that won’t mature for another five to six years and gorgeous views of Federation Square.

The walls throughout the Future Food System’s home are made from straw. Bakker refused to use any chemicals, toxins or glue on the project, so the walls are made from compressed organic straw coated in natural lime.

“We actually embedded the straw panels with charcoal. I got that idea when I was in Cuba on my honeymoon 20 years ago, and I visited a hospital where bowls of charcoal prevented patients from getting golden staph.

“That’s when I began asking myself, ‘Why don’t we just embed our buildings with charcoal?’ If volatile organic compounds are such a problem, then this is our answer.”

A staircase made from a 130-year-old Cypress tree that was struck by lightning in Ballarat leads to the second floor kitchen and dining area.

The kitchen itself uses methane gas which is converted from organic waste using a biodigester. Anything that can be used again (such as bones, shells and off-cuts) is preserved to stock the larder.

Surrounding the workspace is a colourful splashback crafted from old skateboards, while the timber cabinetry is sourced from the same tree as the staircase, alongside Australian sugar gum. Appliances are supplied by Miele, which has collaborated with Bakker for more than a decade.

Overlooking the kitchen, a large window opens to the outdoor garden, which caters to more than 200 species of plant life and a beehive. Bakker has used a wicking bed – containers with water reservoirs at the base – throughout.

A similar set up is used on the rooftop garden. Here, recycled food drums filled with soil act as a foundation for the structure, while also growing rhubarbs, zucchinis, horseradish, tea and tiger nuts to name a few.

“I’ve tried to use materials that people can get for their own home gardens without spending a fortune,” says Bakker.

As for COVID-19. That didn’t stop Bakker from completing the project.

“We started working on the home two weeks before Melbourne’s first COVID-19 lockdown in July and we had a lot of people who supported the project pull out,” explains Bakker.

“But for me, I feel like it’s really important that projects like this happen now because I think that in 20-years’ time, we’ll look back at 2020 and go, ‘Wow, that’s when the Titanic shifted. That’s when change happened’.”

Joost Bakker will be hosting private dining events and public house tours of the Future Food System until June 2021.

You can also explore the home on tours and workshops as part of Melbourne Design Week from 24 March 2021.