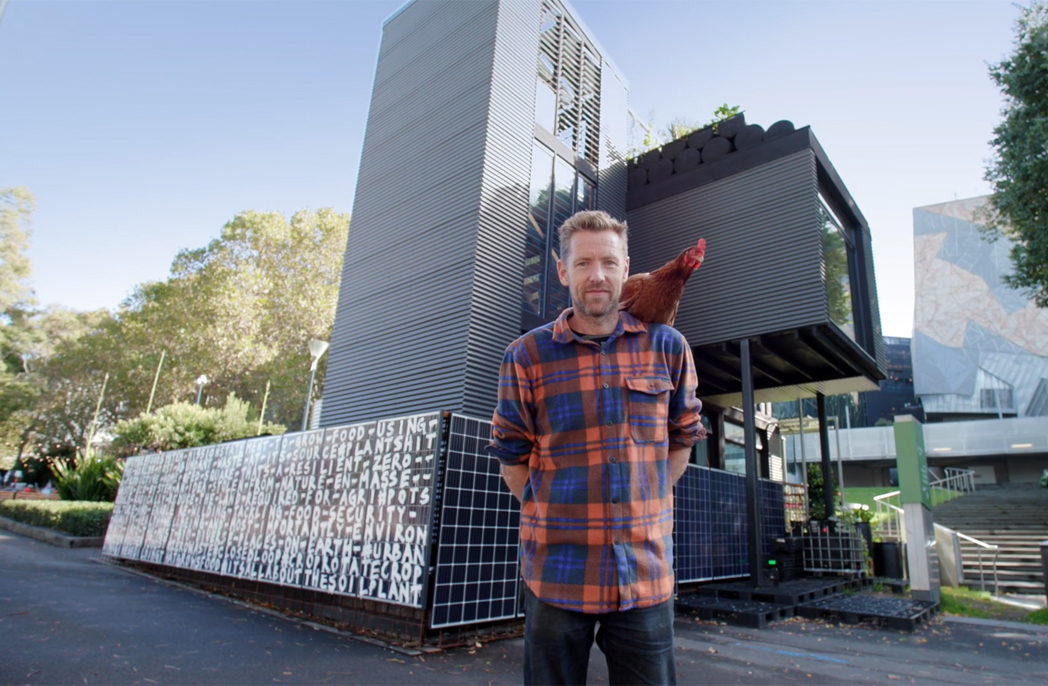 Designer, floral artist and ‘no waste’ advocate Joost Bakker’s Future Food System home on the banks of the Yarra River is 25 years in the making.

The 87-square-metre home on the edge of Melbourne’s Federation Square is a self-contained world, where incredible design extends beyond aesthetics.

For resident chefs Matt Stone and Jo Barrett – recently named Hospitality Pioneers in The World’s 50 Best Restaurants‘s first ever Next 50 list – this tiny home contains everything they need to prepare and serve world class fare daily.

Well, at least until the middle of 2021. Then the Future Food System house will be packed up and trucked off to Bakker’s hometown in Monbulk as a gift for his mum.

Designed to demonstrate the potential of our homes to provide shelter, produce food and generate energy in an urban environment, Bakker’s project is self-sufficient and zero-waste.

A nickel-iron battery wall provides electricity, recyclable concrete tiles line the floor and charcoal is embedded into the straw panels, which are coated in lime and made without chemicals, toxins or glue – just like everything else in Bakker’s home.

There isn’t a corner or angle of the Future Food System house that hasn’t been carefully considered and thoughtfully designed to be natural and nontoxic, recyclable and revolutionary.

This ethos is no more evident than in the kitchen, where Bakker has continued his 20-plus year partnership with the global appliance brand Miele.

A relationship that extends far beyond client and supplier, Bakker and Miele are connected by a commitment to sustainability that spans the designer’s lifetime – he grew up around Miele appliances as a child in Holland – and remains inspired by the brand’s motto ‘Immer Besser’ (Forever Better), which is exemplified in its durable and high performing appliances.

For the Future Home System, Bakker and Miele chose a selection of its world-leading energy saving appliances. This includes the G 7919 SCi XXL Integrated dishwasher, which, with its 4.5-star energy rating and 6.0-star WELS rating, is among the most efficient dishwashers on the market.

In the laundry, you can also catch a peek of Miele’s WWV 980 WPS W1 Front-loading washing machine and TWV 680 WP Heat-pump tumble dryer, which, like all of the appliances featured in the Future Food System home, runs on solar power with consumption costs available for everyone to see on the project’s official website.

In this video, ADR takes you behind scenes of the Future Food System home with Bakker to uncover an architecture, design and urban landscape that is as beautiful as it is inspiring.

IDEA 2020 launches with party in Melbourne