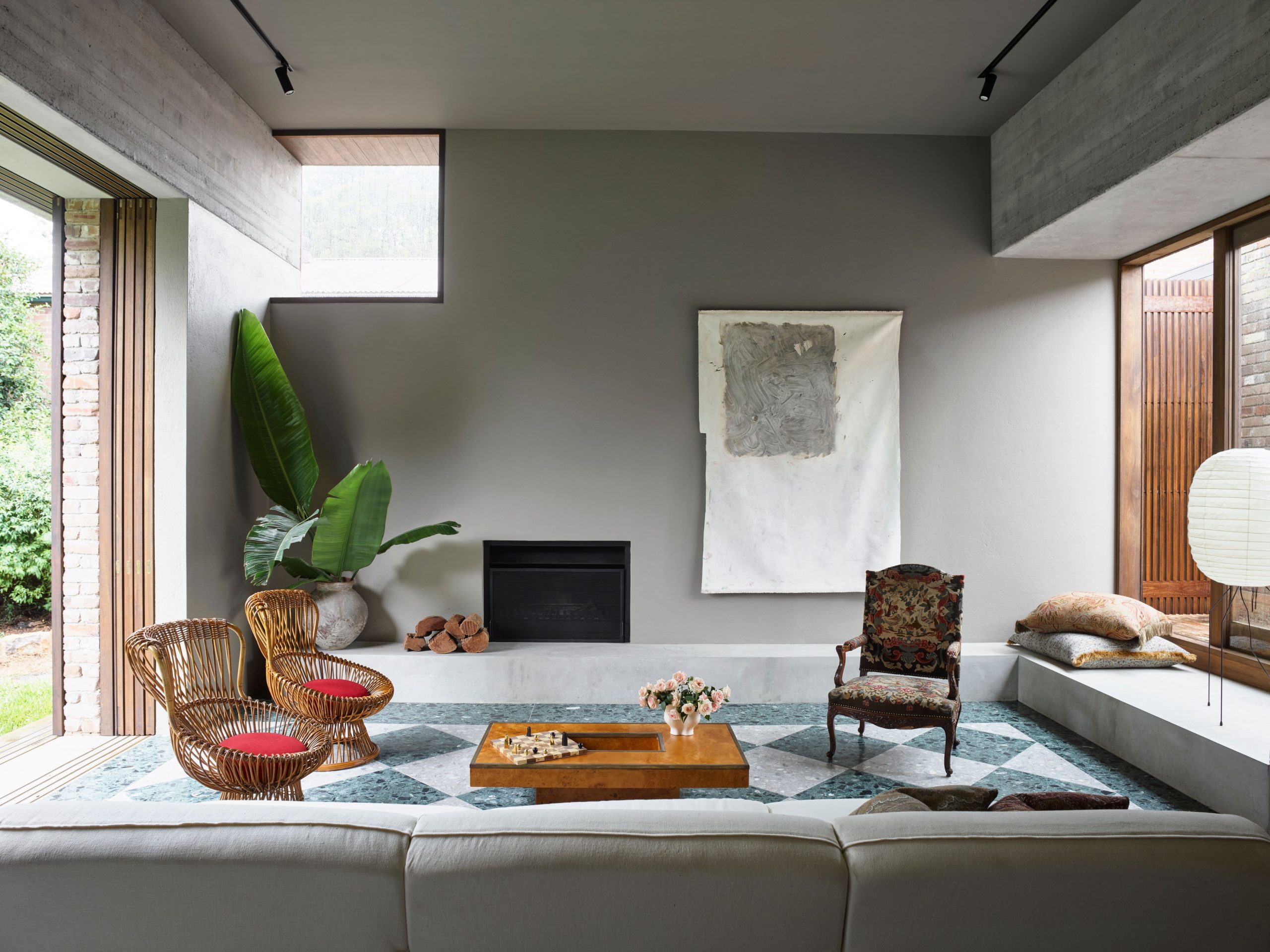 Responding to Polly Harbison’s architecture, the creative team of Arent&Pyke –Juliette Arent, Sarah-Jane Pyke and Genevieve Hromas – has designed an interior that is harmonious, enhancing and entirely considered.

Ostensibly an addition to a Federation brick and sandstone home, Harbison’s architecture uses details to make congruous the shift from old to new, while apertures and windows further this cohesion by bringing the existing house into the addition’s view.

Arent&Pyke has continued this approach with materials that speak to both the modern and the existing. The marble terrazzo floor in a checkerboard design, for example, is a wholly contemporary rendition of a time-honoured pattern.

“The owners wanted to create something outstanding but, more importantly, uniquely theirs.

We were thrilled that, at the outset of this commission, they came to us asking for World of Interiors,” says Hromas.

Grand, ostentatious and bold, the floor photographs like a superstar, yet the photographer’s angle is designed to showcase this stateliness and is exactly as it should be.

Yet, the standing on, walking around experience speaks of quite a different feel. Here, the floor is secondary to the view and flow into the garden.

It is a neat difference and, while both approaches are excellent, this visual style allows the sense of the garden’s open space to pervade the home.

“On our first visit to site, we quickly realised that the incredible garden was the star of the show and the owners wanted to feel as if they were living in it.

The garden has a grove of trees in the middle and a heady mix of flowers in every shape and colour. The owners wanted their house to have a similar combination of rich colours and textures, yet with the same feeling of calmness,” says Pyke.

To touch briefly back on the female qualities of the design and architecture, the main end wall facing the garden could have been a massive picture window and would have been heroically wonderful for being so.

Where Arent&Pyke steps away from this response is in the details. Rather than end the room, it has continued it through layers of sliding glass and timber screen that give the room myriad moods from the heroic view of the picture window to glazed to screened renditions.

When fully open the layered verticals of timber sit either side of brick in an honest declaration of materiality.

And then there is the night view of the house from the garden with golden light pouring through the slatted screen, like a lantern.

Beautiful. Additionally, the screens can be used to delineate and confine spaces. Effectively, the area of the main room facing the garden is an open plan living and dinning room.

Here, the screens can be used in much the same way as a rug to signal a beginning and end without truncating space.

Furniture has been selected for its slight but not overt garden feel, the vintage wicker Margherita chairs, for example, have the mood of colonial palm rooms, which tie them to both the garden and original home while sitting firmly within the contemporary.

Occupying the same plane as the main room, the bedroom is entered through a lovely arched doorway to the left, which allows oblique garden views to peripherally expand the view.

A small high window to the right of the main window plays a similar role in expanding the view or, rather, in bringing the garden into the home.

Working back into the house, the kitchen is, as always with Arent&Pyke, a total delight.

“Instinctively, we wanted to bring the earthiness of the outside in, and the colour and material palette reflect that. The trust set forth at the outset by the clients meant that we could create a kitchen that felt uniquely theirs.

“We are not known for white kitchens, so always flex our creative muscle as much as possible in the design of these built-in elements,” says Arent.

Breaking the green checkerboard briefly is a set of three red marble stairs that clearly delineate spatial use, while adding a depth and formality to the shift.

The kitchen itself uses the same green as the stone for much of the cabinetry, with the remainder in a burnished rosy golden teak.

White marble facing the island bench, benchtop and splashback create a rhythm of materiality, while the curving form of the island softens its presence.

Another large wall of sliding glass window runs the length of the island, filling the room with light, while emphasising the overall effect of a pavilion within a garden.

The bathroom too uses green marble and cabinetry in teak and high gloss emerald. Where previously the pattern was formal, here the terrazzo is wild with huge chunks of green and black playing to the natural riot of green Esmeralda marble used on the walls.

Red marble makes its appearance here as a large insert between indoors and out.

Yet, it is not demarking the end or beginning of the bathroom, as the shower is outdoors.

Clad in mid-grey tiles to a high dado line, before giving way to brick and a round aperture that spills light into the room, the shower is at once an intimate and open space.

The curve of the opening in the bricks is echoed in the bathroom mirror with semicircular cut-outs, which echo back to the curves of the kitchen island and the bedroom door.

Materially the design is simple, with stone, concrete and timber fulfilling all functions.

Yet the layering and patterns, the shifts in form, the contrasts of colour and the pairing of oblique and overt garden views make this a masterpiece.

Moreover, while confidently answering the brief to bring the garden into the home, Arent&Pyke has used startlingly bold design elements, unforgiving materials and a stand-alone design aesthetic that has rewarded the client’s bravery with an exemplar home.

Arent&Pyke is a Sydney-based design practice, formed by Juliette Arent and Sarah-Jane Pyke in 2007.

Packed to the rafters – Josh’s place by Custom Mad