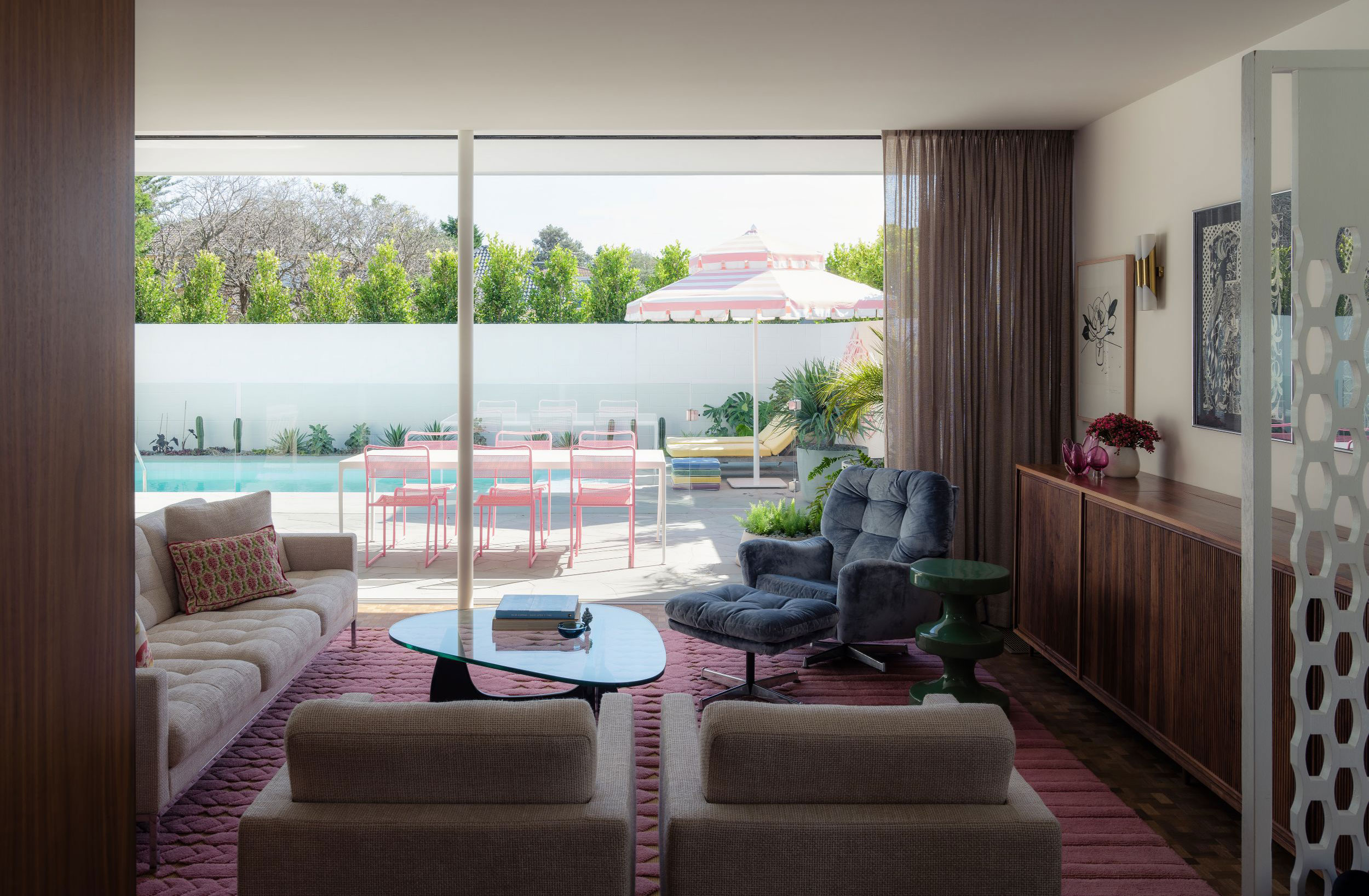 Richards Stanisich has created bright and colourful spaces in this substantial Sydney renovation and addition to a single storey house designed by Harry Seidler.

Dubbed ‘Private Residence’, the house was built in 1958 as a tribute to the modernism of the city.

A self-confessed lover of the post-war era, the client purchased the home with the intent of restoring it with new interiors, gardens, a pool and an extension with a sunken pottery studio that connects the main house with the existing garage. The main bedroom suite was also to be enlarged.

Since the home isn’t Heritage-listed, the client originally sought to expand by adding another floor level to increase liveable space, but Richards Stanisich changed her mind.

“We were successful in convincing her to respect the single-storey, the elegant low proportions of the building (despite being in neighbourhood of two storey buildings) and the sustainable benefits of a modest size house,” explains the Sydney practice.

“(Our goal was to) collaborate with the original design rather than juxtapose against it”.

Inspired by Seidler’s clean lines and rational planning, the practice consulted Seidler Architects and Penelope Seidler in particular, seeking a design that maximised light and created a flow of space throughout.

“Very little of the interiors were in their original state,” it says. “But we designed in a way that responded to the rational planning and clean lines of 1950s modernism.”

The materials selected referenced the joyful use of colour and grain of the period.

“The design intent was for a careful renovation that rebuilds original features – like the basket-weave herringbone parquetry – and adds new spaces like the pottery studio to suit our client.”

Muted pastels against natural and saturated timber dominate the updated interiors. In the kitchen, pastel green formica countertops are paired with timber veneer countertops and a pink cutout for the retro landline.

Outside in the updated pool area, the 1950s aesthetic is continued with a pastel yellow and pink lounge set and umbrella.

Seeking the sense of transparency between inside and out that was common in this design period, landscape designer Will Dangar incorporated internal gardens into the interior living experience.

He also lined the perimeter of the home with palms and succulents, while builders repainted the exterior in the original colours intended by Seidler.

“We were intent on an intelligent outcome that sits seamlessly within Seidler’s building but also one that we have ownership of,” explains Richards Stanisich.

“This project sets an example of how to respectfully rebuild without compromising contemporary design.”

In fact, the connection between the old and new house is defined in the hallway with a full height walnut lining.

When doors are opened in this walnut wall, they reveal areas like the powder room that is lined in vividly colourful wallpaper.

Another fun feature of the renovation can be found in the new walk-in wardrobe.

“The client has been carrying her grandmother’s leopard print rug with her for years and we were able to use it as a carpet in her wardrobe, placed against walnut veneer, terrazzo and pink ceramic tiles,” says Richards Stanisich.

Private Residence is shortlisted in the Residential Single category for IDEA 2020. See who else made the shortlist.

Founded by Kirsten Stanisich and Jonathan Richards, Richards Stanisich is an interior design and architecture practice based in Sydney. The duo left SJB in 2018 to start their own practice.

In its upcoming edition, DESIGN Canberra explores some of Canberra’s mid-century marvels, including Munns House, designed by architect Ernest Munns in 1969.

Kirsten Stanisich – Applying for 30UNDER30 is just the beginning