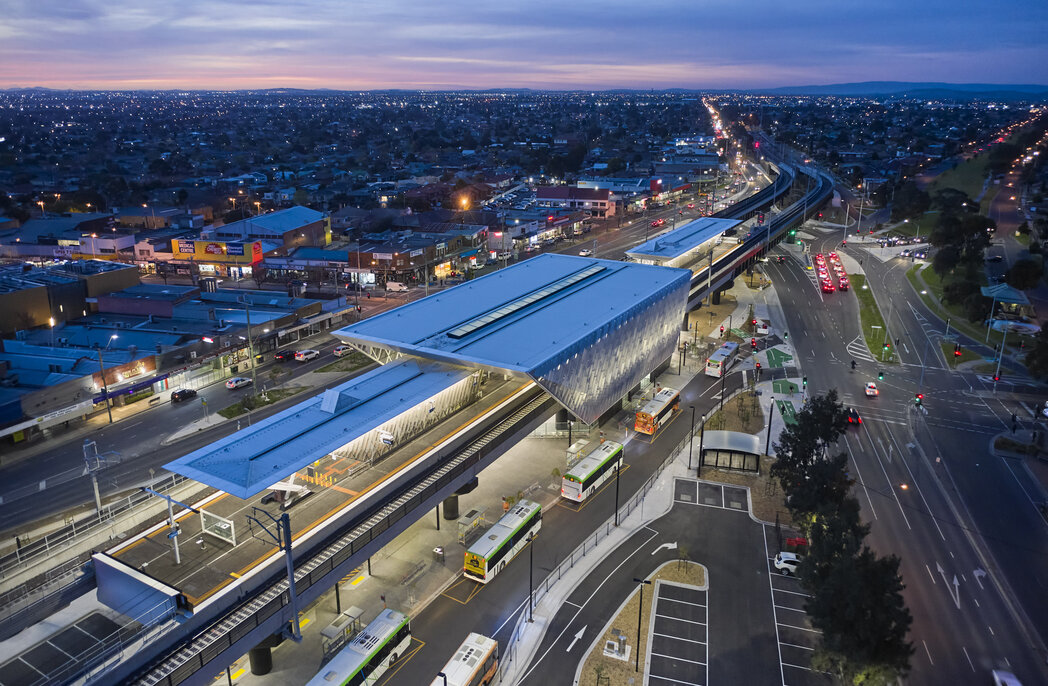 Architecture and design firm Genton has completed their Reservoir Station project, establishing their position as a leader in urban public transport design.

Revitalising the civic heart of a burgeoning Melbourne suburb of Reservoir, with a design that references its historic character.

Genton’s approach to designing Reservoir Station capitalises on the elevated rail corridor — a recent addition, and the first in Melbourne’s Northern suburbs — to create a dialogue between Reservoir’s previously disconnected high streets.

Removing the existing barrier between Edwardes Street and Broadway, the solution links the central community and retail spine, enhancing pedestrian traversal, enhancing accessibility and public safety, and providing a newly landscaped public space to bring the community together.

Wrapped in a translucent canopy, the Reservoir Station design creates a striking civic landmark, defining the suburban centre.  The canopy’s angles interact with light in a manner that reflects the nature of rippling water — inspired by Reservoir’s history as the key water infrastructure of Melbourne.

The facade’s perforated, anodised skin serves a dual purpose for the station, balancing the requirements for weather protection with the desire for views, air and light to produce a space that feels uplifting and joyful for daily commuters.

Sheltering the space from the harshness of surrounding roads, the ground level external walls are conceived as barriers, employing a robust material palette of black concrete and light stainless steel cladding, while brown bricks in the station forecourt allude to the suburban inter-war and post-war Architecture of the area.

As briefed by the client, North West Program Alliance, Reservoir Station was designed to provide for projections of significant growth in the suburb including allowances for a larger bus exchange and tram route.

“As public transportation usage increases due to population growth and consciousness around sustainability, we design these spaces with the intention that they become both a hub for connectivity and a source of civic pride,” says Debney.

” These stations provide for increased connectivity to key job hubs — which is particularly impactful in lower income suburbs — while the stations also act as civic anchors that create more urban spaces for communities that continue to stay local and work,” explains Debney.

“By increasing accessibility and usage with safer, more spacious stations, we’re also setting ourselves up to become less car dependent and to address the next major issue we need to face: climate change.”

Last month, the Victorian Government announced that Genton will lead the design for Glenroy Station.