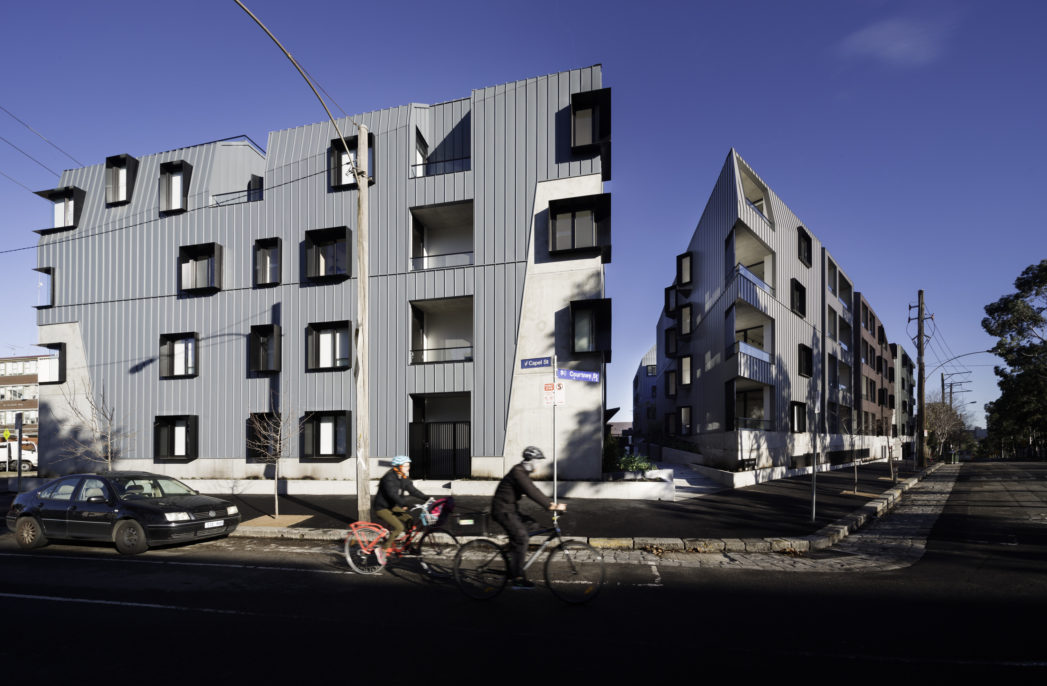 The Assembly Apartments by Woods Bagot is a medium-scale residential development in North Melbourne – but it’s not your average apartment building. There is no high-rise to be seen here, no eternity pool, no retail at ground level, no penthouse.

There is, however, a sense of community, amenities in place to make meeting your neighbours inevitable, and a delightful rooftop garden, complete with herbs. 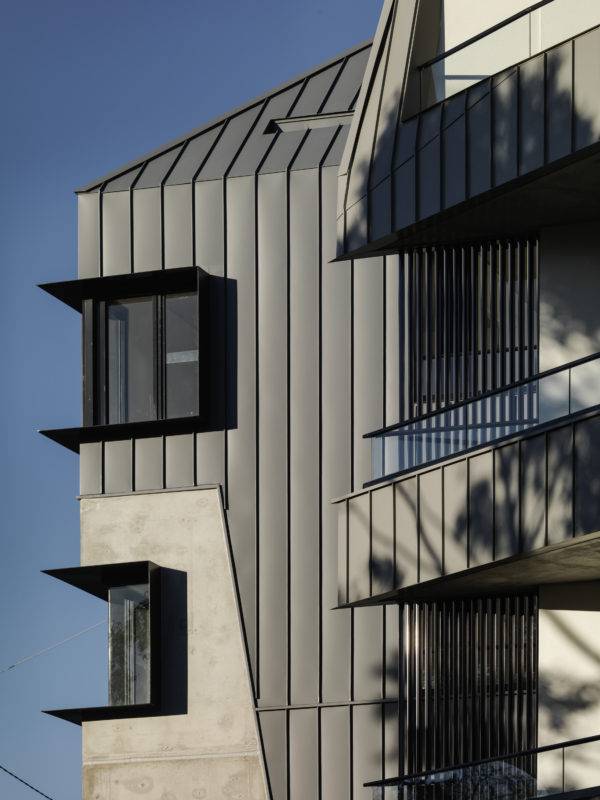 Situated on a large triangulated site, Assembly is made up of four separate four-storey buildings, with a series of laneways weaving between them.

“When we were designing Assembly, we were thinking, ‘How can we take this huge site and give it a sense of community, a sense of village?’” says Peter Miglis, principal at Woods Bagot.

The solution the team came up with was to develop a series of smaller buildings, rather than one big one, with laneways that come off each of the property’s three bordering streets and meet in the middle, at a courtyard. The laneways create a sense of porosity to the site and open things up, in both a literal, physical sense, as well as in a mental sense – living in Assembly means it is hard to avoid saying ‘hello’ to your neighbours. 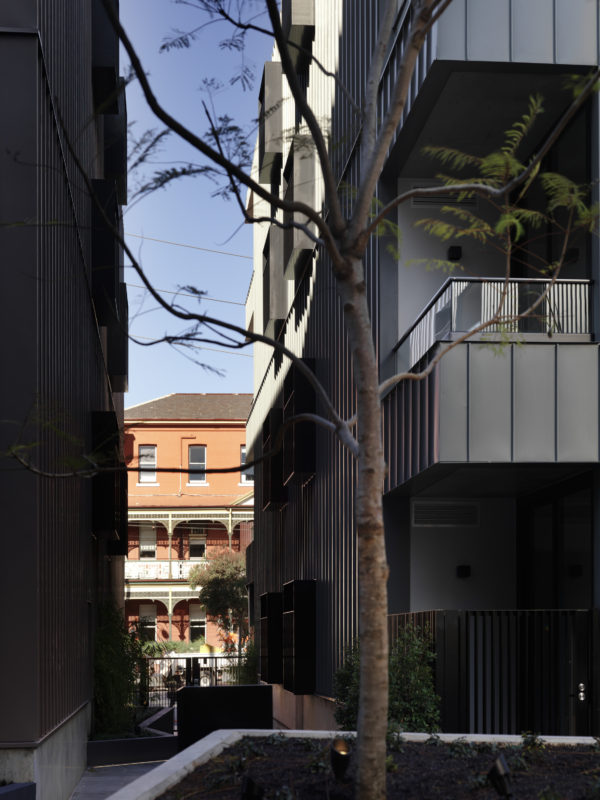 “For us, there were four things we needed to create the sense of a village: one, the creation of social moments; two, the stimulation of the senses; three, craft – a level of detail, and four, place – a connection to the character of the complex’s local context,” Miglis says.

The creation of social moments
Amenities such as the roof terraces, which are communal and allow tenants to plant their own herbs in the garden beds, enhance the opportunity for organic social moments.

“It’s not just about living in an apartment, it’s about living in a greater community through creating these opportunities for exchange,” Miglis says. “For example, we have three of our staff living in the Assembly apartments and they go up to the rooftop and meet different people of different age groups while they’re up there having a glass of wine or a barbecue. It’s about creating those opportunities rather than just giving someone an apartment and that’s it.” 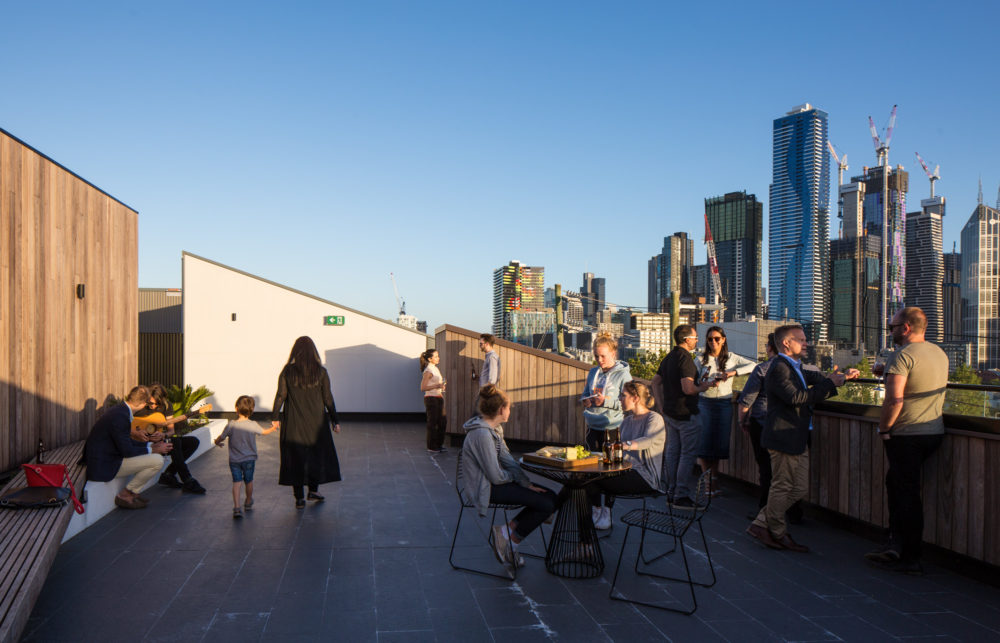 The laneways and the central courtyard are also designed as opportunities for interaction. Styled with cobblestone, which differs from the materials used throughout the remainder of the laneways, the courtyard is a welcoming space that everyone passes through and is shaded by jacaranda trees.

“My favourite part of the Assembly design is the intimacy that’s been created through the density,” Miglis says. “There are a relatively large number of apartments (137), but it doesn’t feel like it when you’re in there because of the way the buildings are broken up.” 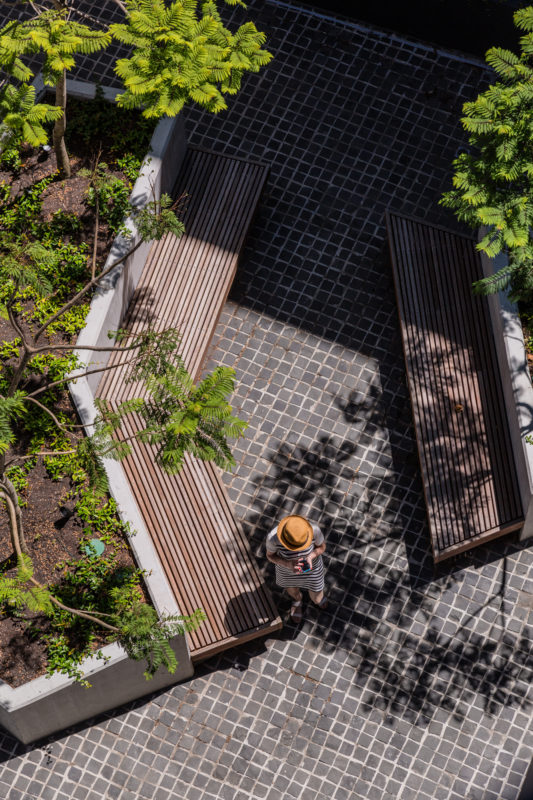 He says that while many apartment complexes see amenities like gyms or swimming pools as key, he instead sees the ability to make people feel ‘a part of something’ as more important. “It’s part of well-being, the psychology of socialisation,” he explains. “It makes it a place that you could comfortably grow old in.” 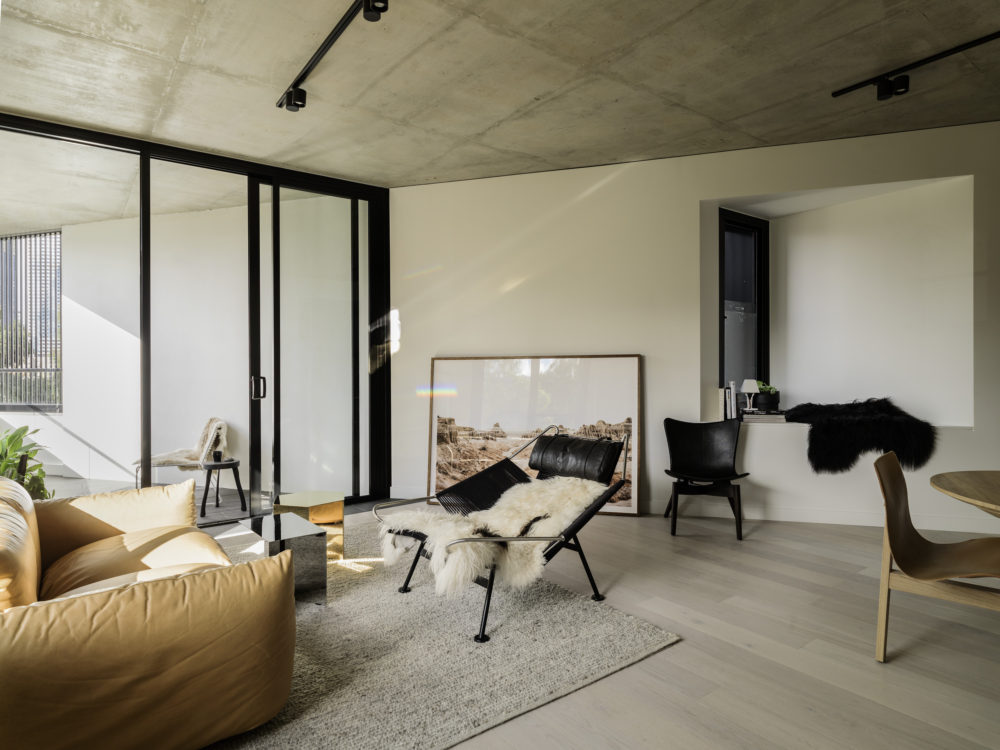 The stimulation of the senses
While the creation of these social spaces also works to achieve Woods Bagot’s second goal – the stimulation of the senses – carefully considered gardens and framed views take this further. In addition to the rooftop gardens, there is significant greenery around the perimeter of the block, as well as throughout the laneways. Climbers have been planted at the base of the buildings and will grow up them over time, adding another dimension to the structures. 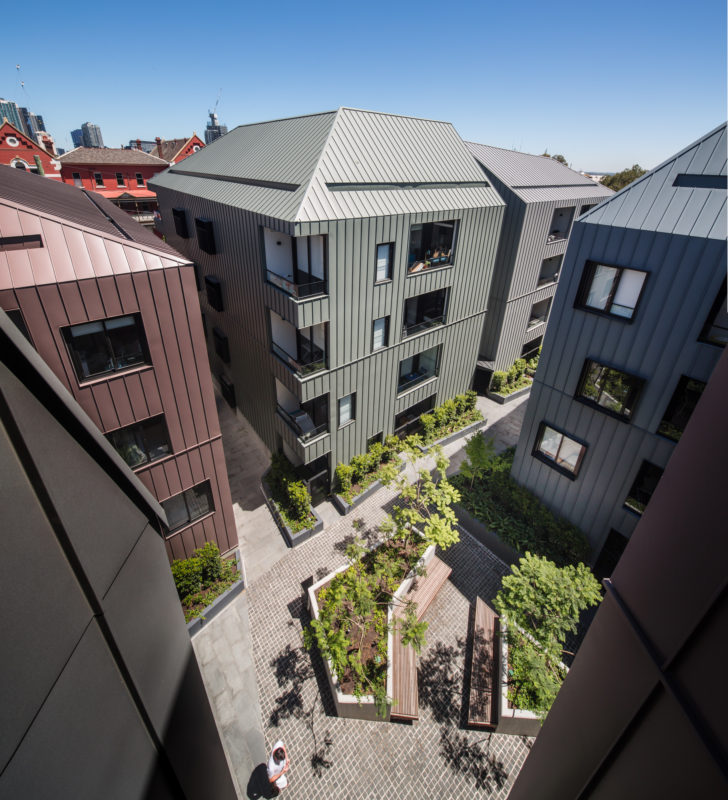 Craft – a level of detail
“The sense of craft goes into the interior spaces as well as exterior,” says Miglis. “Concrete soffits from the balconies extend into the living spaces, so you are in a much rawer, honest aesthetic and it gives you more of an understanding of how the building was constructed.”

Meanwhile, each apartment pod is individually considered – all acknowledging individual parameters or constraints. For example, one of the structures interfaces with an existing Heritage building, and the pod’s roof is shaped in a way that respects that of the building next to it. 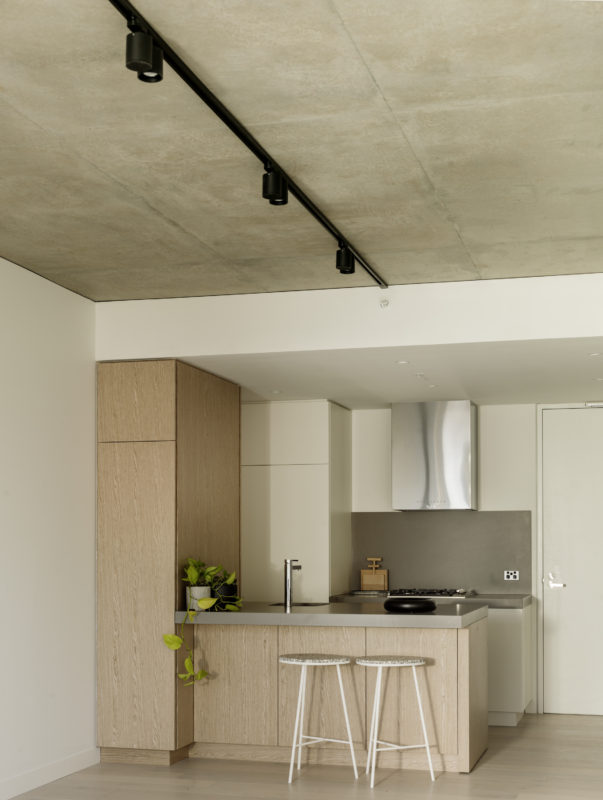 Place – a connection to the character of the complex’s local context
In addition to adding a level of craft, the pods’ subtle odes to the surrounding buildings work to connect the Assembly precinct to its neighbouring context. “Looking at the buildings around the precinct, you have these beautiful, old Heritage buildings, upon which the gable roof becomes the walls,” says Miglis. “We started interpreting that in our building form.”

The pods’ façades are crafted from a zinc-clad system of slightly different colours that works its way over the top of the structure and meets a concrete base, which is of irregular heights. The Assembly roofs are, at points, gabled and run into the walls, just like those of the surrounding buildings. 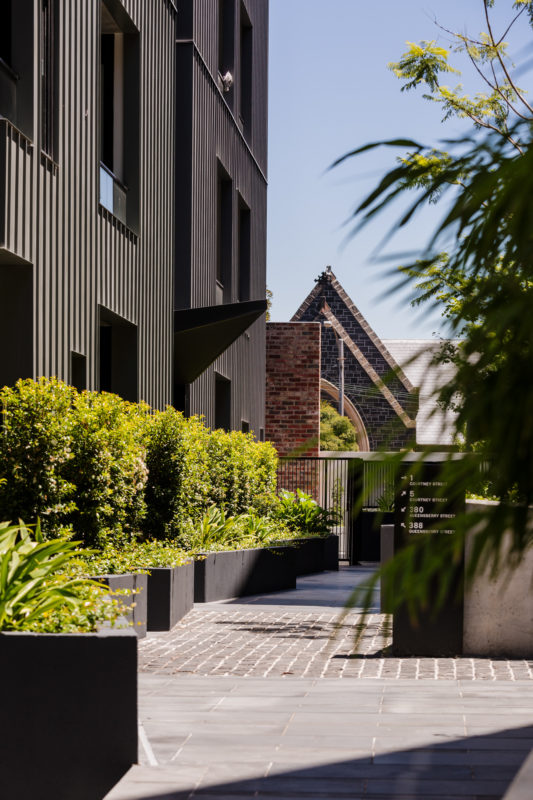 The laneways themselves purposefully bear vistas out to buildings beyond, which provides not only a fulfilment of stimulation to the senses, but also a connection to, and awareness of, the surrounding context. For example, the laneway that runs in the east-west direction aligns with the vista of a church. So, as you walk through the courtyard and down the lane, you are presented with this subtle yet grand connection to the broader precinct that surrounds you.