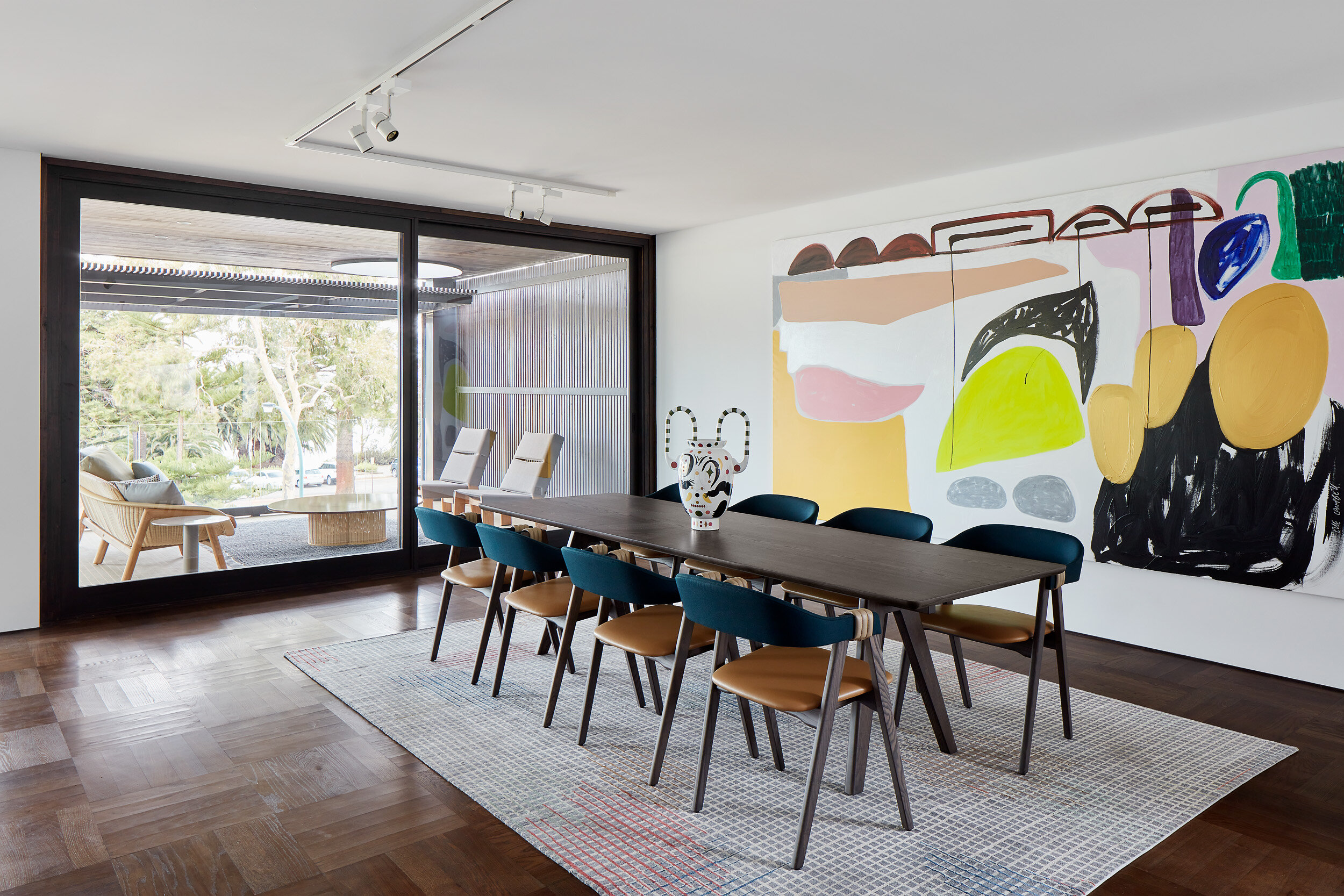 Located in the Perth suburb of Wembley, the 628-square-metre Shutter House was built on a “drastically sloping site” that called for the strategic use of floor levels and the creation of connectivity between spaces “across a variety of planes”.

The locally sourced dark timber battens, which wrap around a three-storey concrete block structure were inspired by Japanese architecture – a style that also influenced the “stacked volumes” that the house presents to the street.

“We wanted to soften the facade architecturally and were very drawn to the traditional Japanese use of timber in a variety of applications and forms,” State of Kin director Ara Salomone tells ADR.

“With the shutters raised, a sense of the adaptability of the spaces within and the emphasis on a connection with the outdoors is evident.

“When closed, the home presents a more opaque face to the street, prompting a sense of intrigue that carries throughout the project.”

When open, the timber screens also act as awnings, providing shade while drawing in uninterrupted views of the lake to create a “feeling of tranquillity”.

Inside, the ground floor features a six car garage, wine cellar and entry into a three-storey void that connects the levels via a staircase.

“A snaking handrail layered over curved glazed panels is effortless as it wraps around the passage, softening the structure.”

A circular cut out in the roof to the balcony and circular window illuminate the stairwell, while a gallery space connects to an internal courtyard on the first floor.

Also on this level are four bedrooms, three bathrooms and a laundry. Alfresco spaces are tiered and linked, framed by timber battens and a concrete boundary wall, floating stairs and built-in seating.

In the bathrooms, travertine sits against textured white tile with graphic coloured grout.

Linear black Agape fittings and fixtures and curved glazing reference the curves of the exterior architecture.

Outside of the bathrooms, concrete lines Shutter House’s ceiling.

“We really wanted to retain some elements of the structure as visual elements within the home and reveal the architectural bones of the home,” explains Salomone.

“Grey warehouse style concrete floors were not the right solution for this concept, but revealing the slabs as the ceilings allowed us to introduce the warmth of timber underfoot and the industrial concrete above.”

Structural concrete was also left exposed in a few key areas to allow users to “better connect” with the structure of the building.

“We felt it important for users to experience and understand the culmination and integration of the aesthetic and practical elements of the home,” says Salomone.

“It is also a sustainability consideration and an effort to minimise the use of additional materiality where possible.”

Along with the oak parquetry on the upper levels, the materials palette for Shutter House “subtly references” mid-century homes and Art Deco without “overtly mimicking” their style.

“The palette is warm, rich and saturated with a layering of natural textures set against crisp whites,” says Salomone.

An open plan living, dining and kitchen space on the second floor completes the home with panoramic views of Lake Monger.

In the kitchen, a sliding timber batten panel references the facade and conceals the walk-in cool room, gas and induction cooktops and servery window to the alfresco island outside.

At its centre is an island carved out of Bianco Chiavara Granite from Zuccari Stone.

“It has so much depth and movement with large pieces of crystalline stone embedded within a clean white base,” says Salomone.

“It picks up tones and colours used in other areas of the home and the leather finish is such a soft tactile experience for such a hard material – you just want to touch it!”

A separate pool house to the rear of the block features a studio space and a quarter-round window provides views from the courtyard.

“Living and active spaces are connected, overlooking the lake to the front and the pool to the rear,” concludes Salomone.

“This home is an exploration of tactility, a balance between powerful and gentle sensations and an experiential space throughout.”

State of Kin is a Perth-based multi-disciplinary design studio led by Ara Salomone and Alessandra French.