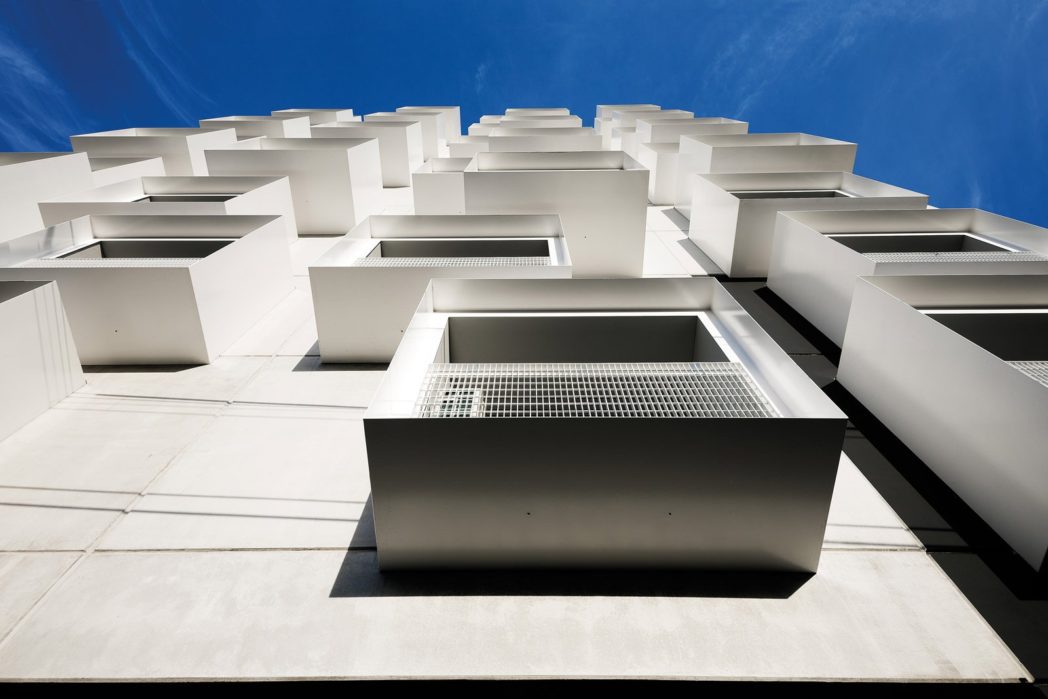 ADR looks back at the winning projects from IDEA’s residential-multi category over the last five years. This retrospective provides some insight into the evolution of the typology and what has defined it over the past half-decade. This category is currently sponsored by Rogerseller.

Among a building category where plasterboard lining predominates, SDS chose to boldly celebrate the elegance and brutality of concrete in this building of 10 apartments in Balgowlah. Enduring walls and ceilings celebrate the honest material while polished cream and black joinery centrepieces add ancillary elements of contemporary multi-residential living. At its exterior, Sydney 385 features a façade of solid brickwork, a skin evocative of the brick veneer homes of the ’60s.

Upper House is a 17-storey structure which features a scattering of cantilevered balconies and windows that give the building an engaging three-dimensional quality.

The building also demonstrates a new-age clarity in urban composition and social inclusion – engaging its residents through a communal space on level 11, which incorporates a lounge, gymnasium and dining space that overlooks a garden roofscape. A mirrored soffit to the upper form creates reflections of the gardens and social activity, providing a visual cue to the elevated garden from street level.

2014 – The Commons by Breathe Architecture

Constructing more with less, The Commons presents people with what they ‘need’ rather than a product of saleable marketing perception. Described as a ‘revolution’ in multi-res living, the building works to be ecologically, financially and socially sustainable, while working to respond to the personality of the resident within. “It was about giving people a home, a place that could evolve,” Jeremy McLeod of Breathe Architecture says.

In a similar vein to Upper House, The Commons aims to break down the traditional anonymity of multi-residential living through a rooftop social hub which incorporates clotheslines, veggie patches, beehives and various zones to accommodate both large crowds and smaller gatherings.

Read more about The Commons, and similar projects built under the Nightingale housing model.

Sunday Apartments redefined, for their time, what is achievable on a budget without sacrificing design. To overcome the challenge of one- and two-bedroom apartments with a small footprint, the essential support items required for modern living were consolidated into a central life support unit, or ‘pod’.

Like many of its genre that have followed it, the Sunday Apartments provides a community zone in the form of a courtyard atrium which includes a pool, landscaped terraces, cabana seating, a BBQ zone, open pit fire and tranquil zone.

The façade of the Sunday Apartments is unique – featuring a combination of coloured glass and aluminium louvres which give a sense of connection between the residential floor and the communal terraces, as well as providing cross-flow ventilation to the apartments.

Flanking a central common courtyard, the two five-storey buildings that comprise this student housing are on the Clayton campus of Monash University. What sets this residential-multi project aside from others is its uncompromised and stylish vision. With an emphasis on social gathering and interaction, all shared spaces are centrally located in each building, as well as double-height, which plays an important role in connecting all levels volumetrically.

The interior’s real gem is in the studio apartments, which, despite their small size, have been extremely well resolved. At its time, the housing was identified as a new benchmark in affordable housing and a contemporary project that reinvigorated the genre.