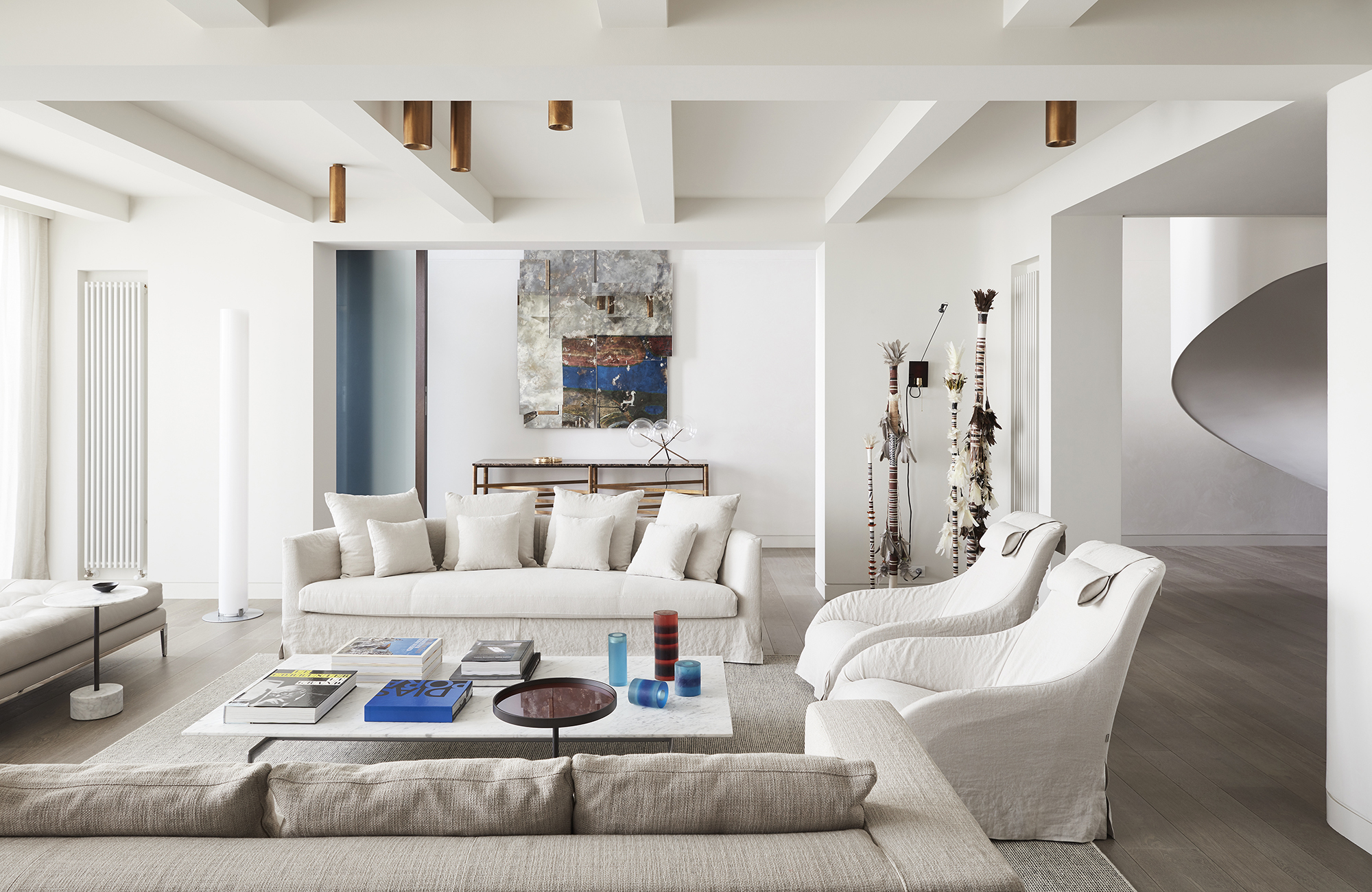 The “fluid sculptural form” of the white steel staircase is at the heart of a complete renovation of this Melbourne home by Jolson Architecture Interiors.

Designed in 2001 by Cox Carmichael and completed in 2003, Arc Side, located close to the ocean, was originally two standalone apartments, but was “reinvented” by Jolson after the clients’ children moved away.

“The brief was to create interconnected and fluid spaces with an emphasis on both horizontal and vertical sight lines that would allow unimpeded views from Melbourne’s skyline to water’s edge,” explains the Melbourne practice.

While the roof and building envelope were “virtually retained”, the interior fitout of Arc Side was “almost entirely gutted” with internal walls and floors removed to create a large home spread across three levels.

“Pivotal to this design is the change in format of the spaces themselves,” says Jolson.

“Previously many rooms featured low ceilings and benefited from having only one aspect. With this substantial renovation, including a monumental seven-metre height void with its dramatic curvaceous steel staircase, each of the spaces can enjoy sight lines across each floor plate.”

By relocating the stairwell, Jolson created open and adaptable spaces that feel intimate for a few people, but were also functional for extended family and guests.

The kitchen and living areas are located on the top level to take advantage of the views and light, while the main bedroom suite is placed on the middle level. Sliding doors disappear, allowing for both fluid spaces and private zones.

Jolson designed the staircase to be a “focal point” that “creates dialogue”, finding inspiration for its fluid sculptural form from the original curved facade of the home itself.

In fact, the curved inverted arch facade, which responds to the home’s Victorian neighbours, was the launching point for Jolson’s entire renovation, informing the design for all the interior and exterior spaces.

“The façade was simplified and the curves became a subtle feature within every space, be it the gentle curved polished plaster walls or the forms of the ceilings,” it explains.

“[As for the stair], the wall behind [it] features a gentle gesture of a subtle curve outwards, allowing simplicity of the ribbon-like steel balustrade to poetically flow through the double height space.”

An “interior free from decoration” and “restrained and understated” material palette complete the home.

Stone is used for benches and splashbacks in the kitchen, paired with white cabinetry and brass joinery.

While in the living room, similar materials and colours are used with a white sofa and multi-piece brass coffee table, with a timber dining table and American oak timber floor.

Outside, the curved stone path in the back garden reflects the curvaceous façade and interior spaces, while a giant screened portal engages with the new and layered garden.

“Arc Side shows what can be achieved by taking and responding to a concept – the inverted curve of the façade’s original design,” concludes Jolson.

“A timeless design, filled with poetic gestures, this home shows how one simple curve can not only inspire the architects, but, as importantly, set them on a new path of discovery.”

Arc Side has been shortlisted for the 2020 IDEA Residential Award, along with another dramatically-staircased Melbourne renovation by Splinter Society Architecture.

See who else made the shortlist. We’ll be announcing the winners of IDEA 2020 at our gala on 19 February 2021. Tickets on sale soon.