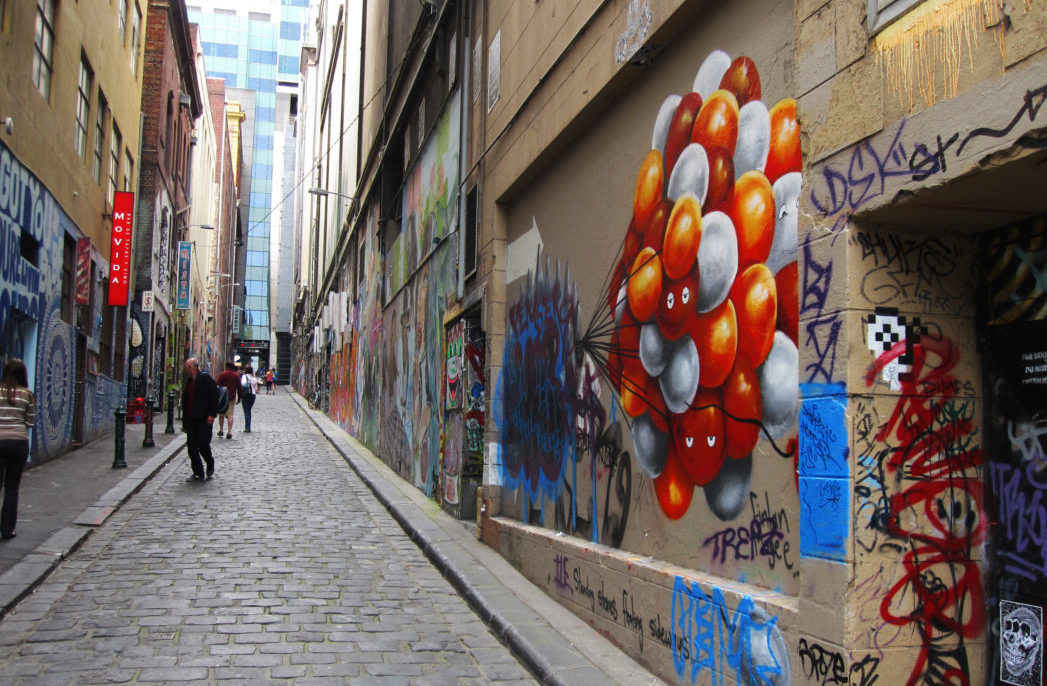 Melbourne’s Flinders Lane is awash with beloved Melbourne culture – gritty laneways, adorned with street art, within which are often the most surprising and delicious of food and drink offerings.

A firm that has had a significant influence on the precinct is Technē Architecture + Interior Design – who is responsible for the design of six iconic venues that line the street and its laneways: Movida in Hosier Lane; Tonka and Lee Ho Fook in Duckboard Place; and Fonda, Grill’d and Garden State Hotel on Flinders Lane. The very texture of the precinct owes much of its unique identity to Technē.

“Flinders Lane has a distinct character within Melbourne’s city grid – it is not entirely homogeneous but the buildings that bound it are generally higher than other lanes, giving it a denser and perhaps more European feel,” says Technē director Justin Northrop.

As part of Open House Melbourne 2017, Northrop and fellow director Nick Travers led a sold-out walking tour of the famous hospitality precinct, focusing on the studio’s venues. Having worked in the lane for almost 15 years, beginning with Movida in 2003, Travers and Northrop shared their insights and proven philosophy on how crucial design is to the success of any ambitious new hospitality venture.

“Great architecture and design is a prerequisite for the success of any major new restaurant in Melbourne. It was optional 20 years ago, it was desirable 10 years ago, but now it is absolutely essential. Design has advanced hugely. The depth and attention to detail is now unparalleled,” Northrop says. “It’s a product of great competition, rising ambitions, the need for operators to be clear in their point of difference and identity, a maturing and growing marketplace (rising affluence, changing patterns of dining and entertaining outside the home) and the public’s rising interest in food and beverage culture in general.”

Technē’s first Flinders Lane project, Movida, was brought together with a budget of around $100,000 – minuscule when compared to the $1 million+ budgets of today. Despite this, the venue broke ground and established a motif for the studio’s hospitality works, which embrace the aged buildings they occupy. “We work with the heritage,” Travers says. “In all cases except for Grill’d, the tenancies are old spaces with loads of great patina. Our projects all celebrate the history of each space.” The restaurant also features the option to eat at the bar, something that is now commonplace but was not so at the time.

“Movida was an early adopter of a more casual dining experience and helped set the local trend for share plates/tapas,” says Northrop. “This has become a massive trend over the past years in Melbourne. The blend of the restaurant and bar was also pivotal to Movida’s success. The bar as a place to dine and used also as a holding area on busy nights. It has definitely stood the test of time… We created a space that felt well worn in and established from the first day. It’s the consummate crowd pleaser and also feels warm and inviting. It’s like an old friend who is entirely dependable.”

At the time Movida was established, Northrop remembers, there was a small handful of venues that were part of the catalyst of change for what would become the current development of the lane and its generation of venues. This cohort included The Adelphi Hotel with its cantilevered glass swimming pool, Ezard restaurant, Rosati, Misty Bar on Hosier Lane, Langton’s and Honky Tonks on Duckboard Place, which was a bar/nightclub which existed within the same building that Tonka now occupies.

“My memory starts to get hazy on some of the other key restaurants and bars in the late 90s/early 2000s, but since that time those early venues have sparked a huge renaissance and development of what is arguably Melbourne’s premier food and beverage precinct,” he says.

In 2012 the firm completed Tonka, a project that the team stayed with from the get-go, all the way through construction. Northrop explains that the venue owner was inspired by spots in New York which feature a deli at the front and dining at the back; he initially wanted the front of the 40-metre long venue to sit as an extension of the laneway with fast food options available, while the back would be reserved for fine dining. This idea morphed slightly over time and now offers casual dining and cocktails up front, with a bright, elegant dining space at the rear. An installation (by Naomi Troski) of white cross-hatched wire weaves its way along the ceiling, over and under itself to create a cloud-like visualisation, adding a whimsical and feminine touch to the otherwise muted browns and greys of the interior.

Design is the key ingredient distinguishing one venue from another, or a successful venue from a failure. “Without great design, the various hospitality experiences on offer would not have captured the imagination in the same way,” Northrop says. “Aside from the food, beverages and service, the fitout design is one of the key differentiators from one venue to the next.”

Fitout, however, is often partially dictated by space, as was the case at Lee Ho Fook, which occupies a two-storey venue where each level is only 100 square metres. As a result, the main dining space is upstairs, characterised by original brickwork and magnificent oregon trusses, while downstairs is the kitchen and a bar. “In the best possible way, you need to make every square metre work its hardest, and we love the challenge that brings,” says Travers.

And finally, Technē’s newest addition to Flinders Lane, completed last year, is the impressive Garden State Hotel. At nearly 2000 square metres total, the venue is broken into a number of individual spaces including a front bar with a classic pub feel, a rose garden themed area, and the crème de la crème – the central garden space with a glass ceiling, populated by trees, plants and sunlight.

“A hospitality brief blends several different requirements, such as high-use functionality, the theatricality of making an impression so people enjoy being in the space, bringing in innovation and new ideas, and matching these things to an experience that is welcoming, social and inclusive,” Northrop says.

That sense of welcome and enjoyment is increasingly important, as restaurants and bars come to be seen as the natural environment for urban residents ‘outsourcing’ their entertaining of friends. “What we are seeing, especially in venues such as Garden State Hotel that are updating the idea of the traditional pub, is a return to community-based venues that people can use as an extension of their own living rooms and that’s where they do their entertaining. It’s really a home away from home,” he adds.

This trend is part and parcel of the shift to casual dining in all its various forms, which both directors agree has been the biggest change in the hospitality sector over the last 14 years. “Melbourne’s rich culinary history, combined with its status as a multicultural melting pot and a population with the critical mass to drive competition in the hospitality industry – all these things dovetail with the shift to casual dining,” Travers says.

“You get these small, laneway-based venues – and larger ones tapping into that same energy – that are informed by culinary influences as diverse as Spanish tapas or Asian street hawkers. But they all share this emphasis on
casual, dynamic and social experiences. And the importance of architectural design cannot be overestimated in creating that experience.”