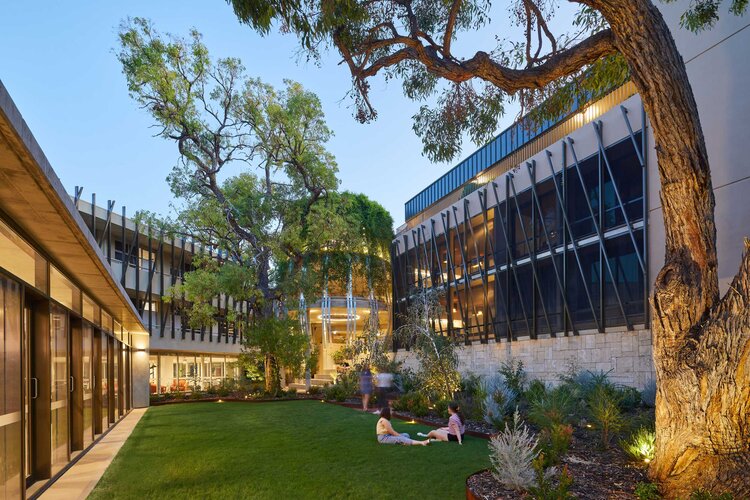 Wilson Architects has designed a new student accommodation complex at the University of Western Australia’s St Catherine’s College. The building accommodates the College’s Dandjoo Darbalung program, which in Nyungar means ‘mixing together’, aiming to provide equity of access for Indigenous students.

The Queensland-based firm’s main objective for the building was to facilitate the support pillars of the Dandjoo Darbalung program, which is to provide extensive academic support and clear pathways for young Indigenous people.

Early development-phase research between Wilson Architects and St Catherine’s College revealed that Indigenous students, in particular, struggle with the dislocation and isolation of living away from their home.

For some students, traditional campus living can facilitate reduced social interaction, whereby social contact might occur only in dining halls or passing in the corridors, and these students can quickly become withdrawn and isolated in their rooms, leading to poor personal wellbeing and education outcomes. Wilson Architects’ solution was to reconstruct the College living environment.

The principle planning strategy of the new building was to create a household from a hierarchy of rooms with different amenity placed around a shared common space with multiple purposes, behind a common front door.

It also meant a household could be a vertically composed of students with various university experience, creating small communities with a social structure more aligned with the indigenous idea of Kinship.

Central to the building’s cultural understanding was the creation of the Banksia form, an open four-storey structure centrally located at the confluence of the building and campus networks, veiled in expanded mesh and green vegetation. This was a vivid contrast to the rigidity of the adjacent institutional building typologies.

On the ground level and first floor, the Banksia is a bleacher seat forum, the second level the central external social learning and reflection space, and the top-level is an externally open but shrouded cultural ceremony space with a fire and smoking pit.  This consistent and dominant form imposes itself on the College creating a significant landmark that reinforces the cultural importance of the facility.

The building’s core narrative is its openness and connection to its surrounds. Interior spaces blur with the outside, acknowledging the importance of indigenous identity through an individual’s occupation and sense of belonging, rather than the identity being prescribed through the building.

Careful planning focused on maintaining all the existing mature trees has helped create human-scaled courtyards which are a distinct feature of the St Catherine’s campus. Rooftop and elevated terrace gardens provide an enhanced amenity for both the occupants and broader campus.

The Indigenous courtyard is bounded by the new accommodation building and also the Dandjoo Darbalung: where the program is run from.

This space is directly adjacent to a complementary learning centre in the reconditioned Prescott Building ground floor which has been repurposed from accommodation to a campus-wide learning centre.

Founded in 1884, Wilson Architects is a Queensland-based integrated firm of architects, interior designers and landscape architects specialising in education, health care and laboratory facility design. The firm priorities the interaction of every project with its surrounding landscape.

“It’s very much about going in as open as you can, not just inertly listening to the community, but also contributing, and that’s about relationship-building,” said Yugembir man and principal architect in the Office of the Government Architect NSW, Dillon Kombumerri. Kombumerri spoke to Stephen A. Russell about embracing Indigenous culture in design practice.