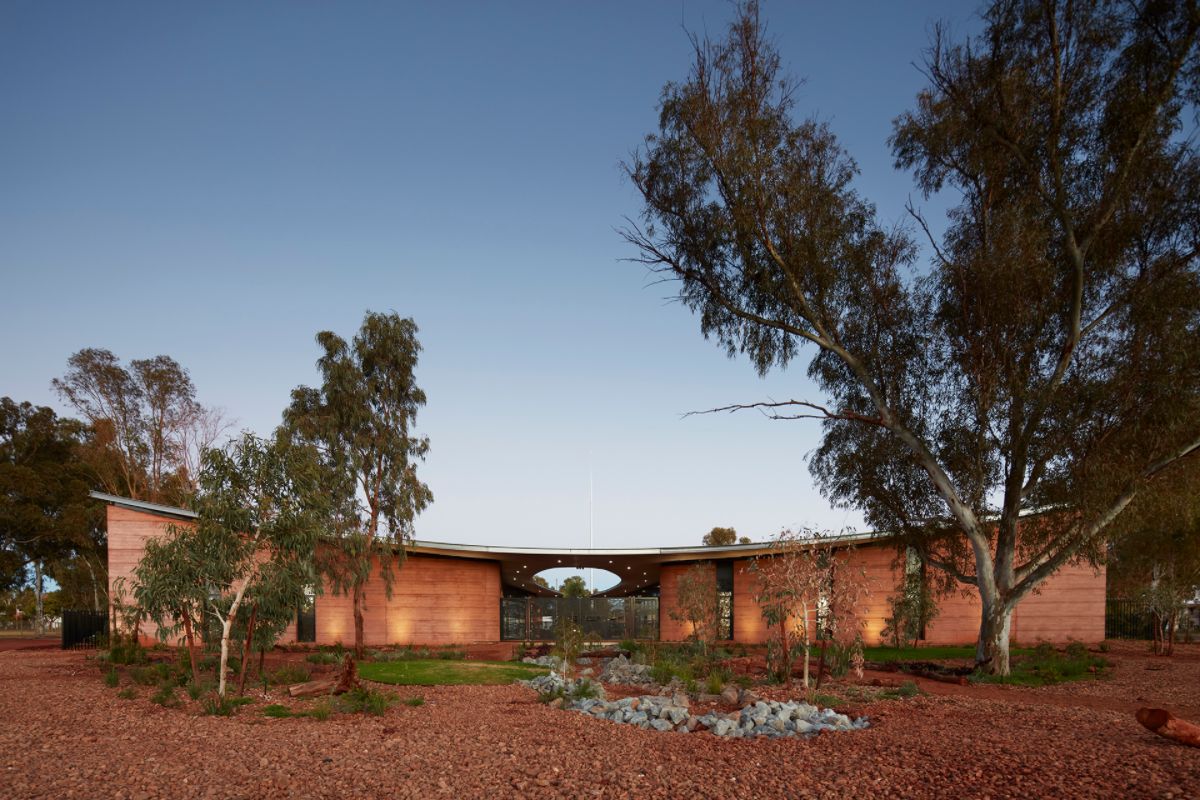 An inclusive, respectful design and approach is at the heart of the Puntukumu Aboriginal Medical Services (PAMS) Healthcare Hub by Kaunitz Yeung Architecture.

The Sydney-based practice won the 2021 Good Design Awards sustainability prize this month for the project, which is located in Newman, almost 1200 kilometres north of Perth.

Opened in July 2020, the hub is the first primary healthcare facility to be built in the town, serving 10,000 primarily Indigenous Australians.

It incorporates the PAMS head office and four chair hemodialysis, as well as a primary health clinic catering to general practice, child/maternal health and dental treatment, alongside allied health facilities for visiting clinicians from Perth.

Its design was facilitated in close consultation with the not-for-profit organisation and the local community, ensuring that architectural elements were appropriate to culture and county.

A key aim was to minimise the large cost and negative mental health impacts of Martu and Niaboli people leaving country and family for treatment in Perth.

Its co-design process built on that undertaken by Kaunitz Yeung Architecture for the Punmu & Parnngurr Clinics, which is also in Western Australia and was completed in 2018.

“This was underpinned by spending significant time in the communities over years, which enabled impromptu ‘yarning’, under a tree, at the petrol pump or on the way to the shop,” adds the practice.

“This enabled all voices to be heard from a nomadic culture that is not always comfortable speaking within the mob.”

Externally, rammed earth from the site itself was used for the PAMS Healthcare Hub, reducing the embodied energy of the building, which would have otherwise been clad in manufactured materials transported from Perth.

“However, its value to the project is much more profound than this,” adds Kaunitz Yeung Architecture.

“Rammed earth creates a human and intuitive connection to its place. The material is country. It reflects the different light and absorbs the rain just like country.

“The excitement in the community for the project was palpable once the rammed earth walls were erected.”

A courtyard forms the fulcrum of the building, diving the health clinic and the administration, while enabling a visual connection and the opportunity for interaction between management and the community.

It’s decked in Australian hardwood to minimise any heat sink effect and be comfortable under bare feet. Downpipes are replaced with spouts that guide the water into the central swale planted with mature Eucalyptus Vitrix trees mimicking the dry riverbeds of the area.

Landscaping from the newly created and unfenced public park flows into the courtyard. More than 2000 local endemic plants were used in the “low maintenance, robust and relevant” approach.

Another important feature of the hub is its art. A series of art screens form window protection on most windows and the entry gates.

Featuring work from seven artists selected by the community and representing all the communities serviced by the health centre, the screens filter light into the rooms.

At night and lit from within, they become “a beacon of culture” into the community.

Completing the project is a 150kW rooftop photovoltaic array, which is anticipated to provide 100 per cent of the building’s electricity, reducing recurrent running costs for the organisation.

Kaunitz Yeung Architecture is a Sydney practice founded by husband-and-wife team David Kaunitz and Ka Wai Yeung. To date, it has worked in more than 30 Aboriginal and Torres Strait Island communities, 200 Pacific Island communities, as well as in Asia.

In 2019, the practice redefined multi-storey childcare with the launch of the Paisley Park early learning centre in Brookvale, New South Wales.