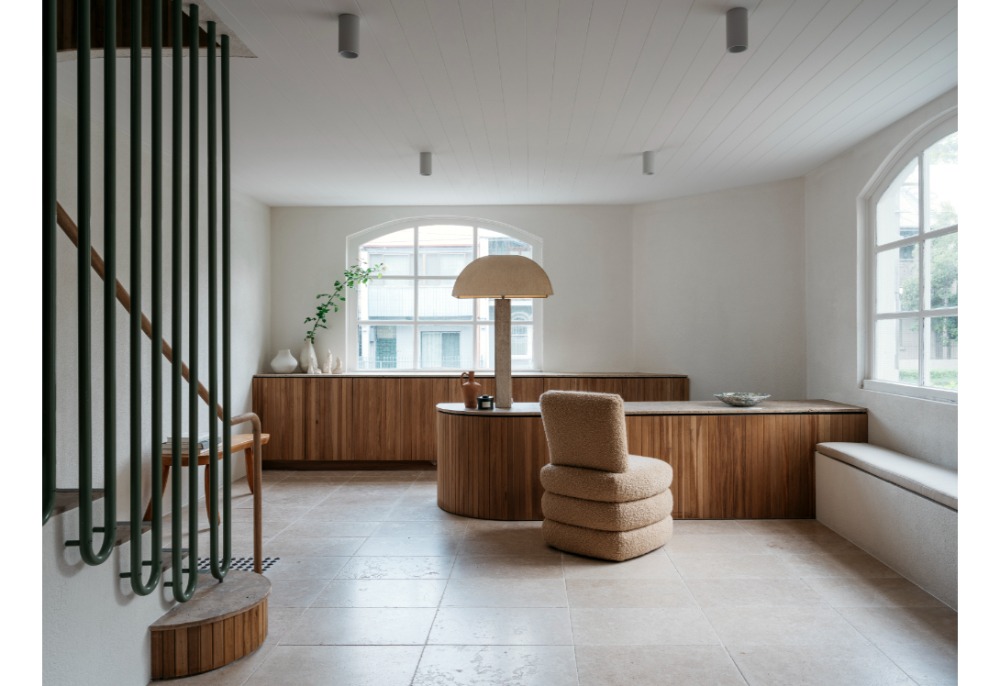 Reinvented by THOSE Architects as the new operations hub for a growing Australian fashion label, the Aje headquarters is situated in a 130-year-old landmark Sydney building.

Completed last year, Aje’s headquarters has been shortlisted in the 2021 IDEA Awards, featuring in the Workplace under 1000sqm category.

Winners are set to be announced in person at our annual gala in Sydney in February 2022.

Approached by the Sydney property developer Milligan Group, THOSE Architects was tasked to restore a sense of authenticity to the century-old building.

The project unearthed the identity of the original architecture, while also evolving the site into a contemporary workplace.

ADR: You weren’t designing for Aje from the outset, is that right?

Ben Mitchell: The brief for the project was atypical whereby the end-user entered the process once construction was already underway. Initially, we were approached by the Milligan Group who had recently acquired the building.

They had been following our portfolio and engaged us to deliver what they envisioned to be a hard-edged industrial aesthetic to the space so that they might approach selected creative businesses to take on a long term lease. Other than a loose description of the aesthetic that was envisioned, and that ultimately a commercial tenant was sought, the brief was loose.

What did the site look like when you first approached it?

BM: A 130-year-old building with a colourful and chequered past, including a recent fire, was inherited and entrusted to us at the commencement of the project. On the initial visit, we were struck by two things: One was the opportunity to reinstate the legibility of the original building fabric. The second was to overcome the lack of access to natural light and ventilation.

The building was a layer cake of construction, mostly done ad hoc over many generations and iterations of the building’s lifespan. In one location, we counted 16 layers of tiles. Most of the windows had been blacked out, bricked in or removed. The interior spaces were dark, damp and level changes abounded, rendering it impossible to orient oneself within the space.

So how did you interpret the hard-edged industrial aesthetic in the brief?

BM: Over multiple visits to the site we took note of the gentility of the building, at the graceful detailing that once adorned the interiors and exteriors. Through careful observation and investigation, we came to understand that a more subtle and nuanced response was required, one that did not merely set about to overlay a raw hard-edged aesthetic.

To this end, we set about to achieve two things. The first was to carefully remove those elements of the building that were clouding its legibility and restore a sense of authenticity.

The second was to alleviate the issues associated with the deep and broad plan by introducing a vast triple-height atrium with a glazed gable roof. In this way, we sought to take a sustainable approach to the project by retaining the built fabric and recycling those components of the building that were not architecturally appropriate.

The introduction of the central atrium completely transformed the environmental performance of the building by flooding natural light and ventilation deep into the plan and reducing the building’s reliance on artificial lighting and HVAC.

In turn, materials were selected and sourced for their minimal environmental footprint, and, where possible, used in a completely natural state to promote the patina of use over time.

Can you tell us a little about the design process and collaboration with the client?

BM: It was a three-way process between the developer client, the end-user client and us as architects. We worked closely with Milligan Group on general project direction and base building matters and closely with Aje to ensure the fit-out would reflect its core brand values and aesthetic.

The exterior of the building features a classic mint paint colour. Was this a homage to the original building or a new colour choice?

BM: We selected this particular shade of green to ensure the building stood out on its prominent corner location, but also sat comfortably within the context of the Heritage conservation area of wider Surry Hills.

How do you want people to feel when they enter the new Aje headquarters?

BM: The space is designed to feel lofty, airy and bright. This was not an easy task to achieve in a century-old terrace. Yet, the interiors reflect the Aje brands values and relaxed but sophisticated aesthetic.

Founded by Simon Addinall and Ben Mitchell, THOSE Architects has studios in Sydney and Byron Bay and designs buildings that connect people to place.

Explore more from the 2021 IDEA Workplace under 1000sqm finalists and other award categories on the IDEA website.