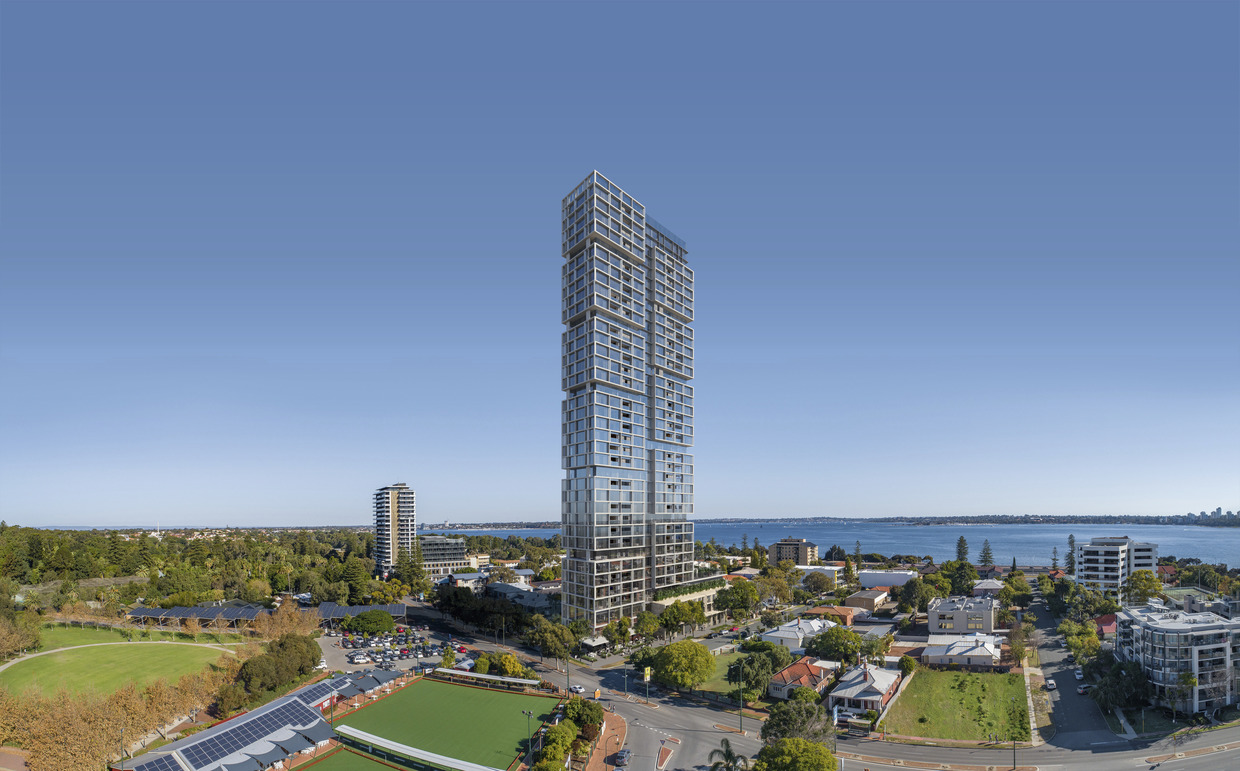 28 Lyall’s is a highly identifiable residential tower that sits seamlessly within South Perth. It is also far removed from the area’s existing tall buildings, consistently shaped as concrete apartments with wrap-around
balconies.

“The concept grew out of the DNA of South Perth, a distinctive place
with its own identity characterised by single storey homes and 4 to 5
storey apartment buildings,” said Philip Vivian, the project’s design
director at Bates Smart and a Perth native.

“Ours is the first building in the area to offer a collection of larger sky
villas as homes. Instead of creating a singular tall building, we took
South Perth’s two dwelling types and stacked them vertically. “

“Single storey villas separate five storey apartment volumes. They are vertically stacked in recessed slots and framed by horizontal planes to create a feeling of floating.”

The tower’s façade responds to its orientation and interiors, while providing passive solar shading. The splitting of stone blocks inspired its fret pattern, with tapered blocks randomly angled to create subtle variety and movement across the façade. Its materiality references two local Western Australian stones, coastal limestone and Toodyay stone, to create a warm palette.

The 98 apartments—some double level—are designed to maximise
views and create spacious living areas. All residences have north aspect and views across the Swan River to the city skyline.

Resident amenities are located in an outdoor landscaped garden that is
framed by a pavilion. These include a gym, open air swimming
pool, and sunbathing and relaxing spaces—communal areas where
residents can come together and build community.

The result is a vertical village with a human scale that is appropriate
to the neighbourhood.

“I hope the local community and residents see 28 Lyall South Perth as a building that is carefully considered, that timelessly fits into the landscape of South Perth and heralds a new future for more sophisticated urban living,” says Vivian.

“As an architect it is a privilege to contribute to any city, and it is
particularly nice to be able to contribute to Perth as it grows vertically
rather than horizontally into a more global and vibrant city.”

Bates Smart is one of Australia’s top design firms, leading complex masterplanning, architecture and interior design projects across sectors and industries in Australian and global markets.