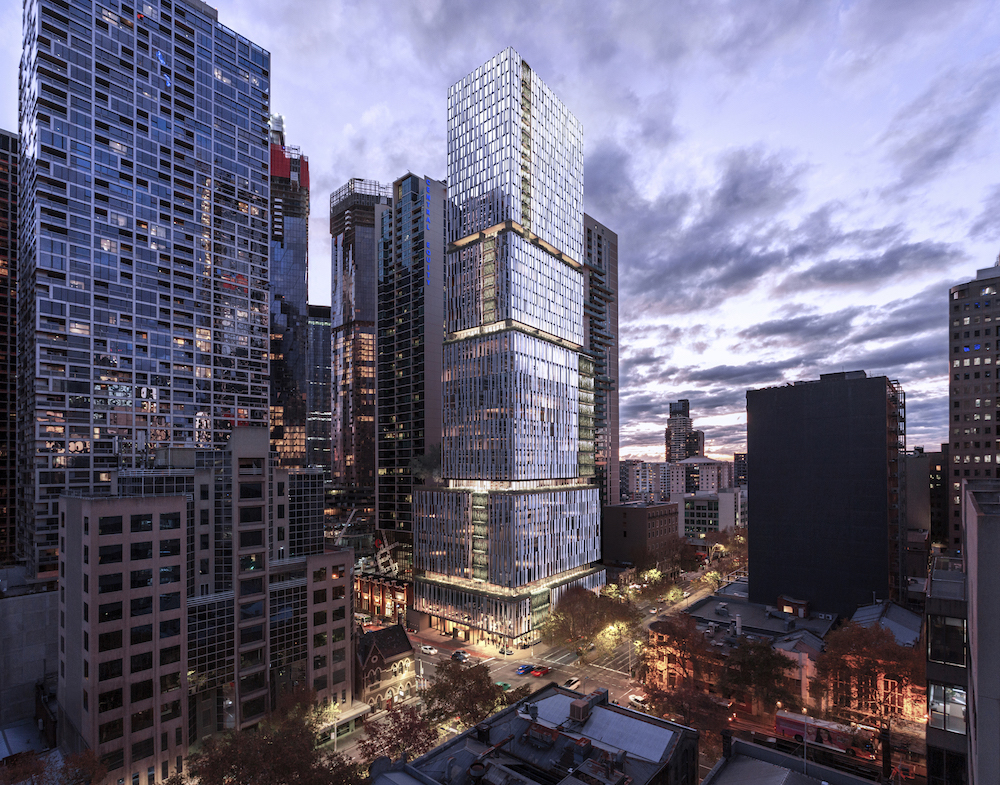 The corner site is set to be transformed into a $500 million 40-storey tower with combined hotel and office functions after recently gaining development approval.

Resembling a ‘stacked tower’, the building’s exterior is inspired by Melbourne’s legacy of terracotta and faience facades. A 280-key boutique hotel will sit atop approximately 24,400 gross square meters of office space.

Fender Katsalidis director James Pearce says the two distinct uses of hotel and office will work well in the rejuvenation of this area of the city.

“There is a natural synergy between the two typologies with their growing number of overlapping facilities, even though the combination of these two uses in a single building is uncommon in Melbourne CBD.”

“It’s an excellent way for the lower levels of the building to be activated given the distinct times that each use has its peak – office being during the week and hotel on the weekends,” says Pearce.

Biophilic principles will guide the design, with a series of four landscaped terraces creating a sense of community and are built around a variety of uses and users. Balconies with integrated planters and discrete growing armatures will create a network of green ‘vertical laneways’ along the face of the building.

The outdoor amenities and balconies are accessible from office spaces at every level, providing an opportunity for moments of interaction and reinforcing the overarching massing and articulation strategy.

“Our concept for a ‘fine grain’ tower respects the historic scale of the neighbourhood and introduces a vertical network of ‘laneway-like’ outdoor spaces throughout,” Scott Duncan, SOM design partner.

“Weaving the interior and exterior spaces together is a key aspect of the building’s biophilic design approach speaking to how the ability to spend time outdoors has such positive effects on our health and wellness,” Duncan adds.

A highly permeable and open ground level, and operable storefront elements, invite the public in and further blurs the boundaries of use as hotel while office and retail functions interact and overlap.

Fender Katsalidis is a multi-disciplinary design firm with offices in Melbourne, Sydney and Brisbane. The firm recently began its $20 million development at Levantine Hill Estate in Victoria’s Yarra Valley.