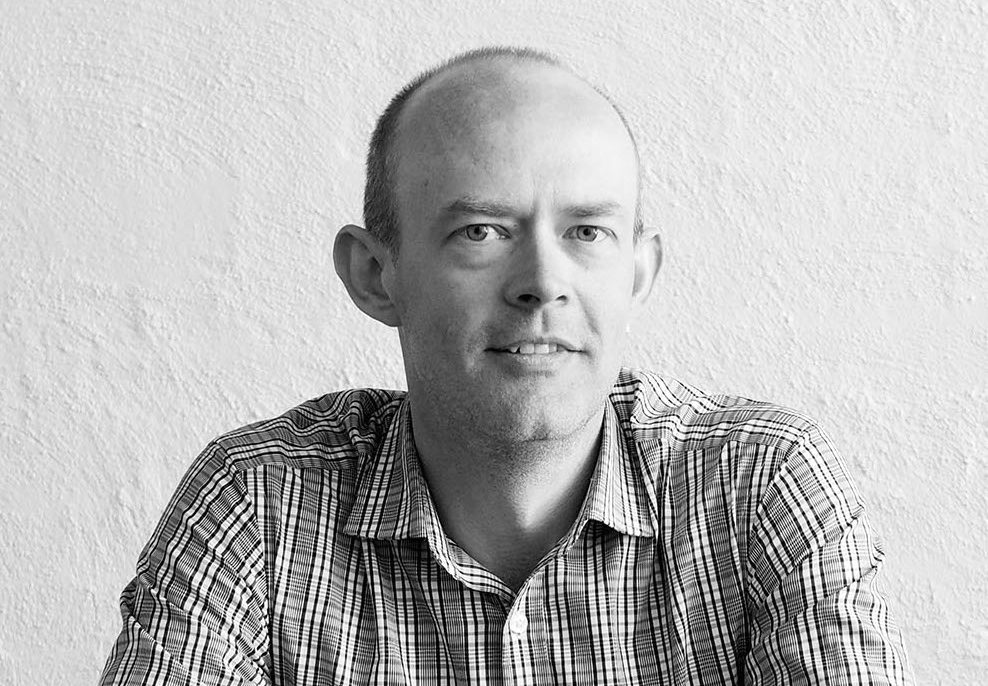 This week we meet Gerald Matthews, managing director at Matthews Architects, which his father founded in 1975. Matthews discusses how a shipwreck inspires his work, what it’s like taking charge of the family business, and the importance of cross-pollination.

Can you tell us a bit about your background and how your interest in architecture was sparked and grew?
My father was already an accomplished architect when I was born. He always seemed very excited about his work. There was a sense of joy, along with a kind of intense focus that permeated everything about him. I’m sure that influenced me. Even as a child I remember being fascinated with the design of all sorts of things and how they were put together. When I was young my father renovated our family home and I remember watching the demolition and construction happen and just getting hooked.

You are the managing director of Matthews Architects, which was founded by your father in 1975. How has the practice changed since those days and what has it been like taking care of your father’s company?
Not much hasn’t changed… Or rather, everything has.

It’s been seven years now since I became a director of the practice. The tools of our trade are different and there are more tools available. Buildings are more complex. Attention to detail is even more important. We’ve always been an agile practice, so adapting to change has never been a problem. The range of services we offer our clients is certainly more diverse. I’m a strong believer in maintaining solid foundations in technical and construction expertise.

Fundamentally, our skills and our values still revolve around imagining places and spaces that don’t yet exist and bringing them into existence. The practice was founded on the idea that each project should be designed from first principles, with no assumption left unquestioned. The reason this has allowed us to thrive is that almost all of our clients are trying to do something new or different, or push the envelope in some way, so recycling old ideas wouldn’t drive them forwards.

You’re particularly interested in aged care. What do you see as the future of this sector?
I’ve been deeply interested in the design of aged care facilities since I first worked on a large-scale facility, about 15 years ago. In parallel with architecture I studied cognitive science and I’ve always been interested in how spaces affect people. The design of spaces for people with dementia still has so much more potential for improvement and there are organisations now taking significant steps in this. We are also seeing a much deeper appreciation for the importance of the social dimensions of aged care environments.

People are staying healthier longer and live longer. This tends to mean that a need for intense care is often brought about by a ‘precipitous event’, such as an injury or illness. The aged care sector is likely to continue to evolve into a system of scalable health and lifestyle services that precede a sudden need for sensitive end-of-life care. There’s more maturity to the public conversation about this now; it’s ok and important to acknowledge death as a natural end to life.

Who/what/where are you inspired by?
I’m inspired every time and everywhere I travel. For me, there is as much inspiration in the shape of an interesting tree as in the latest and greatest architectural wonder. It’s the things that happen inside buildings and how a building softly shapes those happenings that interest me.

I’ve always been deeply affected by the use of scale. One of my favourite buildings is the old Battersea Power Station in London. There’s something about the sheer scale of it that seems at odds with the scale of humans. The effect is equally as powerful at the other end of the spectrum, like the low ceilings in some of Frank Lloyd Wright’s houses. I love buildings that don’t just play with perception of scale but actually use scale.

Every creative puts a piece of themselves into every project. Which of your projects has been most important to you and why?
I recently worked on a middle school facility for St Peter’s College in Adelaide. It was an amazing opportunity to make something better out of a heritage building and create something new that resonated with its surrounds. I’m very proud of the way the finished facility and its spaces enhance the activities within. That building is a character in and of itself.

What is your favourite place or space in Australia and why?
My favourite place is 30 metres underwater. It’s the engine room of a shipwreck off the coast of South Australia. The ship is called the HMAS Hobart. The volume of the space is breathtaking with the light from the surface filtering through the water. It’s an excellent reminder that perception and context have an enormous impact on the quality of a spatial experience.

What would you say has been your proudest moment, either personal or career-wise?
There are two moments that stand out in my mind. The first was a project I worked on in London – at the time it was the biggest project I had been involved in. It had such scope for bravery and such opportunity for success. It centred around the idea of reigniting the heart of an entire borough in London. I had only been in London for a few months and I was such an honour to be asked to be part of the lead design team for something so important. I’m intensely proud of the work our team did and I look forward to going back there every few years to watch as it takes shape over the next few decades.

The second was a few years ago, when we achieved a planning approval to adapt and redevelop an heritage building on North Terrace in Adelaide, called Gawler Chambers. It’s a gorgeous old building has more than a few technical challenges. The design was a carefully considered surgical intervention that offered something new and unexpected to the city. The building is very well loved by the public and is very prominent. I think it would have been reasonable to expect resistance to any interference with the existing form, so I was very proud when the design received overwhelming support and approval.

What are you working on currently?
I thrive on diversity. I think expertise is vital, but specialisation is limiting. Cross-pollination between different types of projects is a great source of inspiration and innovation. Our office is working on very wide array of projects including shopping centres, childcare facilities, facilities for people with disabilities, residential developments, education facilities and commercial premises.

Personally, I do very few houses, but at the moment I’m enjoying working on two private homes. I’m also working on an education project, a mixed-use development, a shopping centre and a few other things. I’m happiest when I’m busy.

We’d love to hear your inspirations and experience in the architecture and design community. Simply email adrteam@niche.com.au with a little introduction of yourself to be featured.