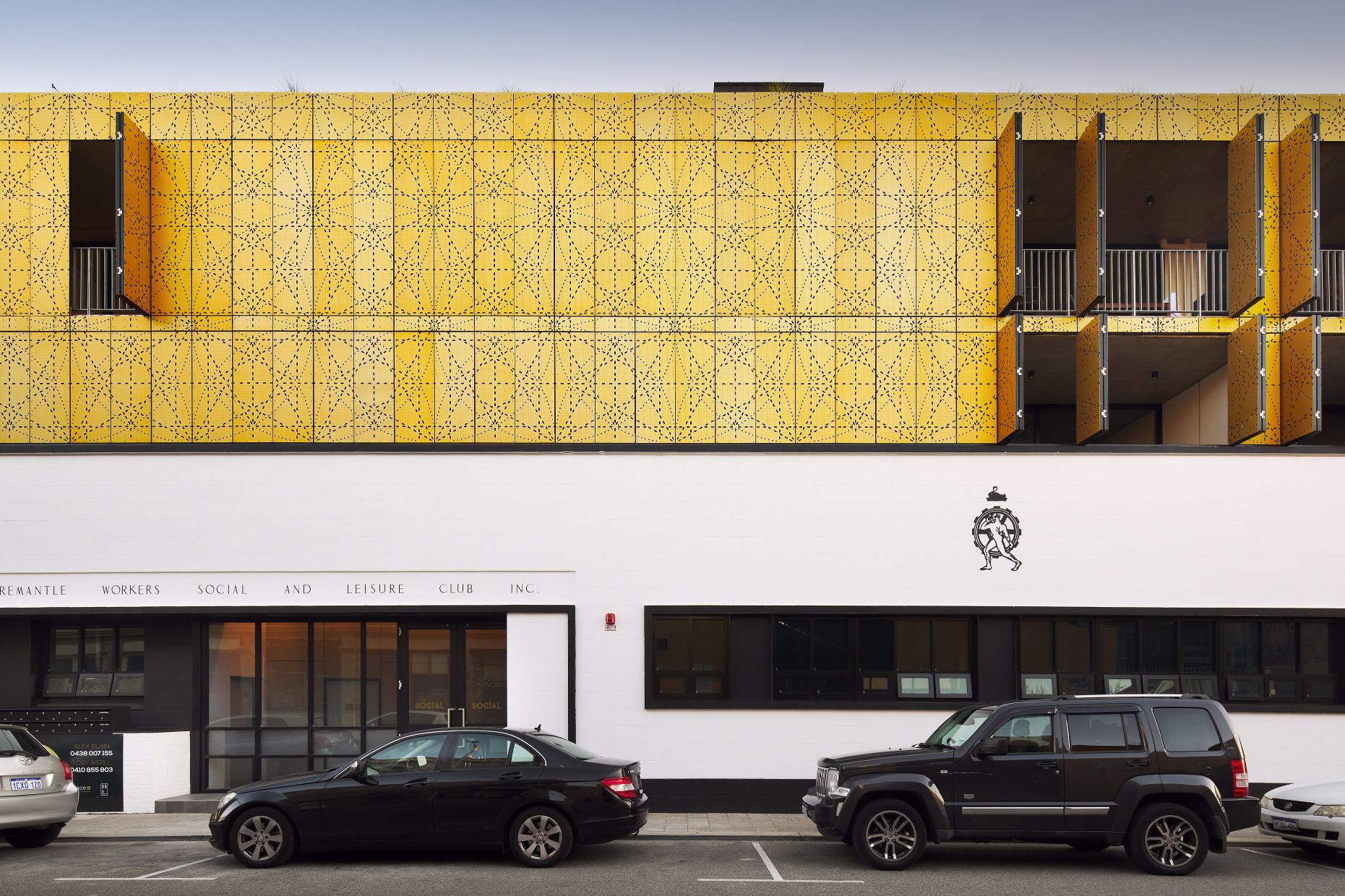 The Social on Henry was the winner of the Award for Residential Architecture – Multiple Housing at the 2021 Australian Institute of Architect WA Chapter.

Located within the heart of the Fremantle West End Heritage area and surrounded by two-storey buildings from the late 1800s and early 1900s, the project seeks to calmly occupy the space above a single storey modernist era façade.

Rising above the simple and modernist proportioned banded façade, the new project presents as a further singular ‘band’ with levels of articulation scaled from openable panels down to an intricately crafted piece of art perforating the façade.

The project delivers 23 apartments and a small commercial tenancy. The building is split into two parts over a ground floor podium, allowing natural light and ventilation into the heart of the proposal. A series of open walkways link the building parts.

The street front facing building rises above the existing retained façade as a series of balconies overlooking Henry Street. These balconies are screened with a series of articulated panels clad in a gold anodised aluminium. The percentage for the art criteria requirement is addressed, and embraced by the developer, by implementing an artist design pattern to the screen.

The artwork, designed by local artist, Eveline Kotai is an evolution of her ongoing series of mathematical diagrams exploring the human wish to measure and record natural phenomena.

This particular pattern is a series of geometries that represents every shape in our natural world. The work establishes rhythm and order that complement the setting of ordered hierarchical patterns of the built surrounds.

The implementation of the artwork upon the façade allows for the development to transition between the two significant existing buildings, ameliorating the mismatched window heights, rhythms and proportions with a new ‘taut’ façade.

The colour gold was selected primarily for its richness in an anodised outcome and as a gentle ‘nod’ to the gold rush era that fuelled the port during its growth period.

The project addresses strict planning framework considerations, specifically height, by introducing a ‘habitable’ roof form to the project. The mansard roof peels away from the street façade and street front, thereby lessening the perceived impact of the building bulk when viewed from the street.

An ‘industrial’ aesthetic is embraced throughout the development with galvanised steel detailing and exposed concrete forms highlighted and celebrated internally in the apartments.

Structurally, concrete slabs connected by blade columns typically hidden in walls form the basis upon which the form is constructed. The roof form is structural steel. The internal atrium space is clad in Cemintel Barestone sheets and accented with simple dark window frames. A small planter garden occupies the first floor, which will over time soften the ground plan environment.

To find out more about the project, ADR sat down with lead architect Andrea Scavalli.

ADR: How was Matthews and Scavalli chosen for the project?

Andrea Scavalli: We had previously completed a mixed use development in Cottesloe for the developer. The project in Cottesloe was similar in some respects in so much as the site shape and associated complexities required a very bespoke solution.

What were your greatest challenges with this project?

AS: First, the site geometry and singular façade aspect to the street meant that the internal planning of the development presented certain challenges to ensure apartments had ample access to light and ventilation. Second, the planning process presented a slew of challenges. The proposal adheres to a strict building envelope and hence the upper levels of the development follow the roof form and pitch.

This allowed us to maximise yield and ensure the upper level dwellings, both three-bedroom apartments, benefited from the ‘loft-like’ outcome. Furthermore, while the existing building presented little built form Heritage, the council recognised that the building, and recognisable façade, held a ‘significant social value’ as a venue frequently visited by people associated with the working port of Fremantle.

Lastly, the construction process – due to the tight building footprint, retention of the existing façade, Heritage buildings bounding two side boundaries and high water table – meant that the building process had to be carefully managed by the contractor.

How did it differ from other recent Matthews and Scavalli projects?

AS: We treat every project as unique and consider the site, brief and site constraints as all elements that have a significant ‘voice at the table’ when designing a possible outcome. As such, every project deals with different factors.

The need to adhere to a strict height envelope meant that the ‘lid’ of the project had to be carefully considered to ensure it was habitable in so much as rooms impacted by the raking nature of the interior needed to be designed, so that the spaces were practical and pleasant to be in. The retention of the existing façade presented a further complexity as we designed the project to ensure that the parapet of the existing façade became the balustrade for the first floor apartments. Therefore the two parameters set by the parapet of the existing building and our new ‘lid’ needed to accommodate between them all the necessary height to fit in structure, services and habitable spaces.

This project in particular, through the use of the screen to the main elevation, allowed us to work very closely with local Fremantle artist Eveline Kotai in implementing a wonderful circular pattern to the operable screens. The application of the screen, from a design viewpoint, allows the project to ‘stitch’ the street elevation together.

AS: The project was commissioned in 2015 and was completed in early 2020. The planning process alone took approximately 18 months as it was initially refused; however, through the process of mediation at SAT (State Administrative Tribunal, we demonstrated that the variations sought provided a better design outcome in terms of built form and perceived impact on the existing precinct. Some further delays associated with marketing and appointment saw the timeline stretched more until a contractor was appointed.

AS: We sought to create a ‘robust’ building. Concrete is exposed internally to apartments, galvanised steel balustrading externally, industrial matt black roof and wall sheeting and the use of special fibre cement cladding to the internal courtyard elevations. We typically seek materials that are ‘honest’ in their application by requiring little or no additional finishing in order to reduce ongoing maintenance costs and associated complexities.

The external screen to Henry Street is gold anodised aluminium perforated sheet. This is one of the few areas where we used a contrasting colour. Gold in particular was selected as a reference to the ‘gold-era’ period of Western Australia through which many of the Federation-style buildings within Fremantle were funded and built.

AS: Very involved. During the design process the clients maintained a keen involvement attending design review sessions held with the City of Fremantle, as well as being present through major presentations to various stakeholders. During construction the contractual arrangement with the selected contractor meant that the project required constant guidance from the clients regarding finishes and aspects to do with the overall cost of the development.

AS: Any project that requires us to work with existing conditions often presents challenges on-site. The retention of the façade and associated structural propping as well as the refurbishment of the existing façade presented challenges.

What was your main inspiration for the design?

AS: The design was driven mainly from the exercise of maximising dwelling yield within an ‘approvable envelope’. From this initial starting point, we then sought to design an outcome that appeared effortless. A key design decision was dictated by the existing street fabric. By virtue of designing an apartment building with associated balcony spaces, the initial proposal illustrated a number of ‘deep reveals’ in the front elevation to the street.

This outcome was considered by us as being ‘alien’ to a street made up of two- and three-storey masonry buildings built hard up to the street boundaries, often with only small openings. An early design response was to apply a ‘taut veil-like’ screen to the façade, ensuring that the elevation responded to the neighbouring building by alluding to an outcome that was built hard to the street and hiding the balcony spaces behind. Once this was established, we began the consultation with an artist to coordinate a design outcome on the screen.

Now the project is finished, what elements do you love most and why?

AS: Personally, the screen. The design and applied artwork are one thing, but a lovely ‘surprise’ is the ongoing dialogue that the building has with the street given the individual owners behind the screen. At times the façade is completely closed and at others a pair of openings appears. It is constantly in a state of flux. A colleague of ours whose daily commute takes him past the project often sends me a photo of the various outcomes.

Another aspect of the design that [I love], after revisiting the project over a year since completion, is the internal garden within the courtyard. The use of a simple green palette for the plant species (Alocasia, or Giant Elephant Ears) is wonderfully offset among the concrete tones.

AS: From our viewpoint, none. The client and associated project manager, by virtue of the contractual arrangement, undertook the rectification of any defects following construction. All apartments are sold and it has been wonderful to see the various rituals of habitation take hold across the development from potted plants outside of apartment entries to the constant flux of the changing façade.

This article is from Architectural Review 169. If you would like to read the full magazine, click here to receive a complimentary copy of our first digital issue.