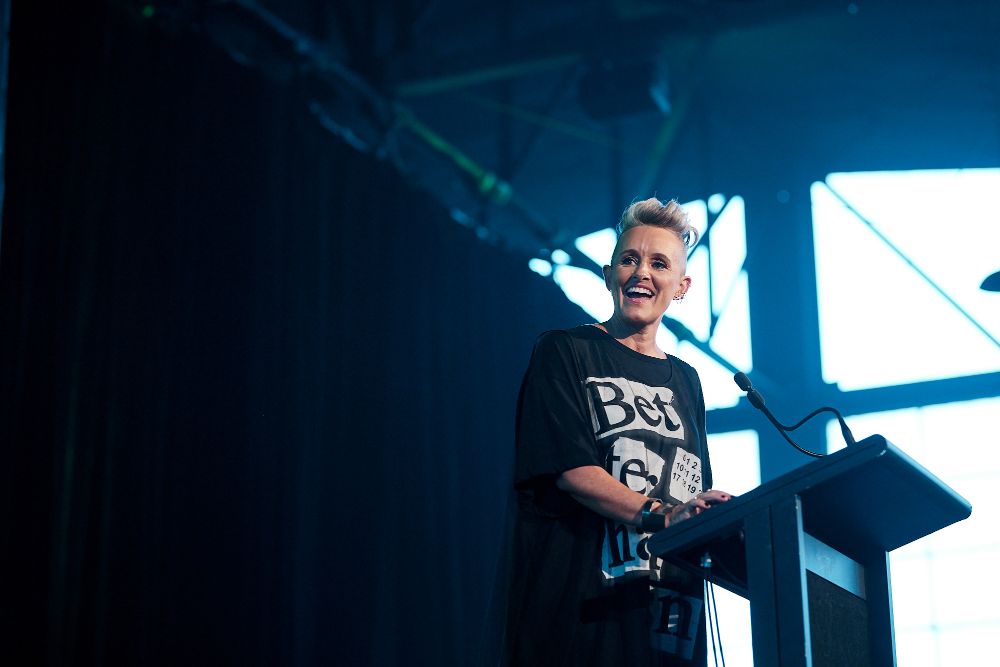 The Dezign Garage’s Juz Mantel back to host IDEA gala!

“At the moment, I’m panicking about saying, ‘Welcome to the Winx Stadium, Randwick Racecourse, Randwick’. It’s a bloody mouthful!”

The Dezign Group founder and Sydney design maverick made her debut as IDEA host in Melbourne last year, taking the reins from longtime emcee Peter Colquhoun.

Her hosting style is high-energy, irreverent and tongue-in-cheek – all adjectives that could be used to describe the diminutive designer herself.

Mantel has been in and about the Sydney design scene for almost two decades. And in a couple of weeks, she’ll be presenting the winners of IDEA 2021 in what she describes as her home turf.

“Last year, I didn’t know a lot of the designers in the audience personally,” she tells me last week.

“So I was less nervous. This time around, there will be a lot of friends and colleagues in Sydney and they’ll know if I’m off my game.

“But at the same time, I’m really looking forward to kicking back with all my peers for what promises to be a super fun night.”

Pronunciation problems aside, Mantel says she’s keen to return to The Royal Randwick, a venue she knows well.

“I used to take a lot of clients there. It’s a beautiful space and really great for large boisterous parties!”

The winners of IDEA 2021 will be announced at our gala in Sydney on Thursday 24 February 2022. Tickets on sale now.

A couple of months ago, we made the decision to postpone the celebration from its original date in November 2021 rather than host a virtual ceremony.

It’s a decision we made in consultation with the industry, with our sponsors and with Mantel.

“I remember thinking, ‘I do not want to host IDEA virtually’,” she says of the discussion.

“It’s actually really really nice to be sitting in a room and cheering your peers on.

“When you’re just watching it on your television or your computer screen, it’s dulled down. I just don’t think I would have been able to be an emcee on one of those.”

And with many of this year’s shortlisted projects completed or partially completed during the Australian lockdown, the gala promises to be extra special.

“At the start of the COVID-19 pandemic, we thought this whole thing would just go into limbo and nothing exciting would be done,” says Mantel.

“You didn’t have clients dropping off things. You couldn’t suss out new suppliers, get samples or try new things. So it could have been really really boring.

“But in reality, it was the opposite. Just looking at this year’s shortlisted projects, you can see that the designers are designing differently – probably because they weren’t in the same office they’d been sitting in for years!”

Mantel is particularly excited to announce the 2021 Designer of the Year.

She doesn’t have a favourite among finalists Kennedy Nolan, Fiona Lynch, FMD Architects, Fender Katsalidis, YSG, Arent & Pyke and Travis Walton Architecture, so she’s as excited as the rest of us to find out who’s won.

“All these designers are so incredible. They’re not scared to push the boundaries in design and it’s really exciting to see them together as finalists. They deserve it.”

Tickets for the IDEA gala in Sydney on 24 February 2022 are on sale now. Places are limited, so grab yours before they sell out.

Following current NSW government guidelines, all attendees will be required to check-in upon arrival. For more information on the steps we’re taking to ensure we can all come together safely and securely, read our COVID safe plan here.

We’re also offering all ticketholders the option to get a full refund on their tickets up to 48 hours before the event regardless of the reason.