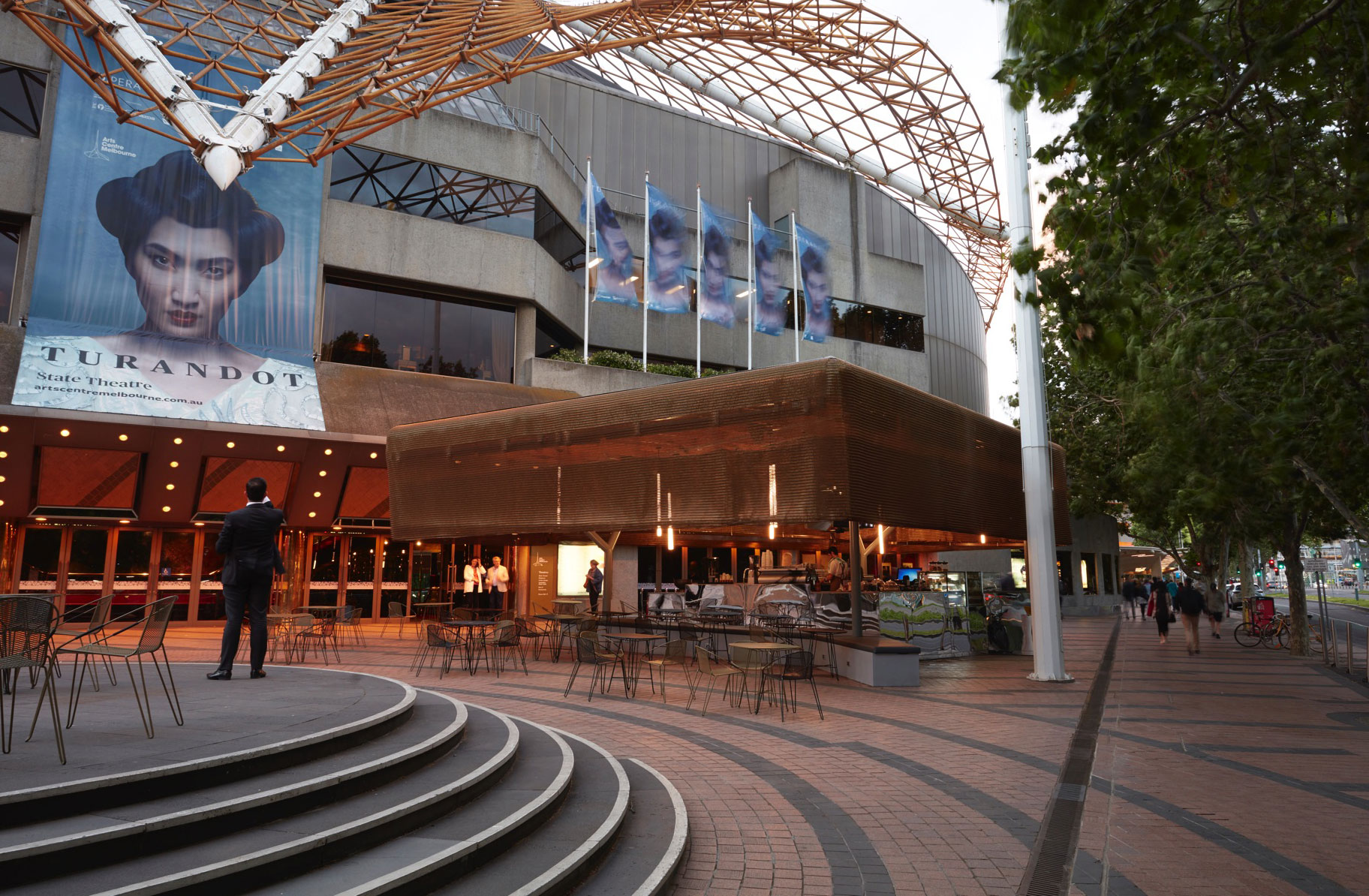 Tasmanian architecture and interior design practice Cumulus Studio has completed the facade for the Arts Centre Melbourne cafe, wrapping it in a chainmail mesh originally found on movie sets.

The material, called Kaynemaile, is a polycarbonate chainmail mesh developed for the Lord of the Rings movie costumes. It’s secure, fire, UV resistant and apt for a cafe that sits outside one of Victoria’s principal entertainment venues.

Cumulus Studio won a design competition in 2018 to revitalise the cafe, then known as Cafe Centro, which was located under a decade-old plastic gazebo in front of the Roy Ground’s designed Theatre Building of the Arts.

The competition brief called for a flexible structure that could be adapted to Melbourne’s varying weather conditions and strike a balance between the need for the cafe to have its own identity, while not competing with, challenging or obstructing views to the heritage-listed Theatres Building.

The brief also called for a sustainably designed structure that is expected to have a lifespan of approximately five years.

Cumulus’ design “plays on the iconic and universally understood element of the theatre curtain as a device to signify ‘open’ and ‘closed’.

The curtain that wraps around the cafe can be adjusted as required. It can be fully opened in summer, partially closed for private events and meetings or lowered and locked completely in the evenings.

The mesh screen allows for natural air flow. The lowered curtain creates a veil that can be used for art projections, marketing and branding.

The roof structure “takes cues from the fly tower/grid theatre stages” to create “a playful and flexible approach to suspending services in an unlimited arrangement”.

Lighting bars illuminate the cafe, which has been renamed Protagonist. The menu has been created from the produce of local growers and suppliers and inspired by a wide range of multicultural influences, including reinterpretations of the classic Australian toastie.

The bronze colour chosen is a direct reference to the Arts Centre Melbourne spire, also originally designed by Grounds.

“The design takes a similar architecture approach the adjacent buildings, each of which has a solid grounding element complemented by a sculptural or grand facade gesture,” says the studio.

“While the form responds to the scale of the context, the materiality expresses a lightness that reflects its temporary nature and contrasts with the heavy masonry of the permanent public buildings.”

Cumulus’ Protagonist is just one of a handful of temporary architectural installations to pop up in Melbourne’s Arts Precinct recently.

The structure is almost adjacent to Glen Murcutt’s aeroplane-inspired design for MPavilion 2019, while next door, in the National Gallery of Victoria, is Edition Office and Yhonnie Scarce’s Architecture Commission for 2019, in absence.

Founded by Todd Henderson, Cumulus Studio has offices in Hobart, Launceston and Melbourne. The studio was recently shortlisted for Designer of the Year at IDEA 2019, thanks to its Stillwater Seven project and others.

Despite being visually appealing, unfortunately the functional aspect of the cafe has not been considered thoroughly.
The original cafe, despite being an old shipping container, its functionality was far superior than that of Protagonist.
Successful Architecture should always include functionality.