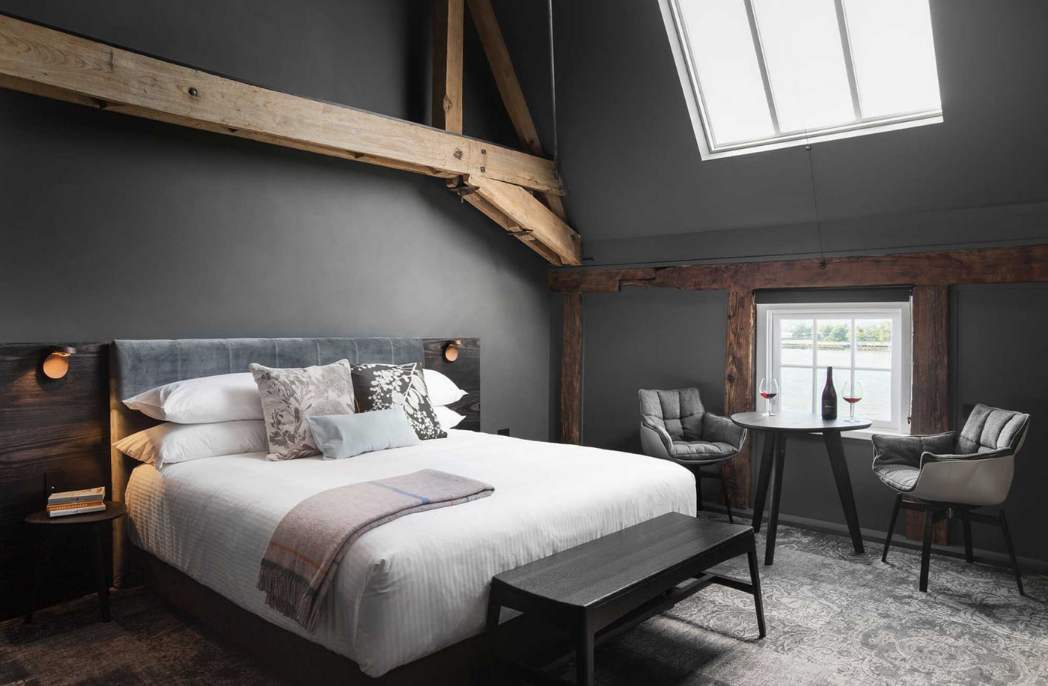 The latest project from Cumulus Studio in Tasmania presents the best of both the old and the new in a design for a boutique hotel that offers every modern comfort within a Heritage overlay.

Located on the banks of the River Tamar in Launceston, Stillwater Seven is a slice of Australian history re-imagined as a luxurious bespoke hotel. Marrying Heritage architecture with present day design for a singular effect, the interior of this boutique hotel offers much more than just accommodation – rather it’s a bespoke experience that will make any Tasmanian holiday special.

Built as a flourmill in the 1830s, the building is clad with galvanised sheet iron, boasts original Oregon trusses and supporting beams within and features two silos at the side. During the 1870s a fire damaged the building and, although the business of the mill continued for some time, it was retired from use in 1974 and bought by the Tasmanian Government to be used as an art gallery and craft centre. 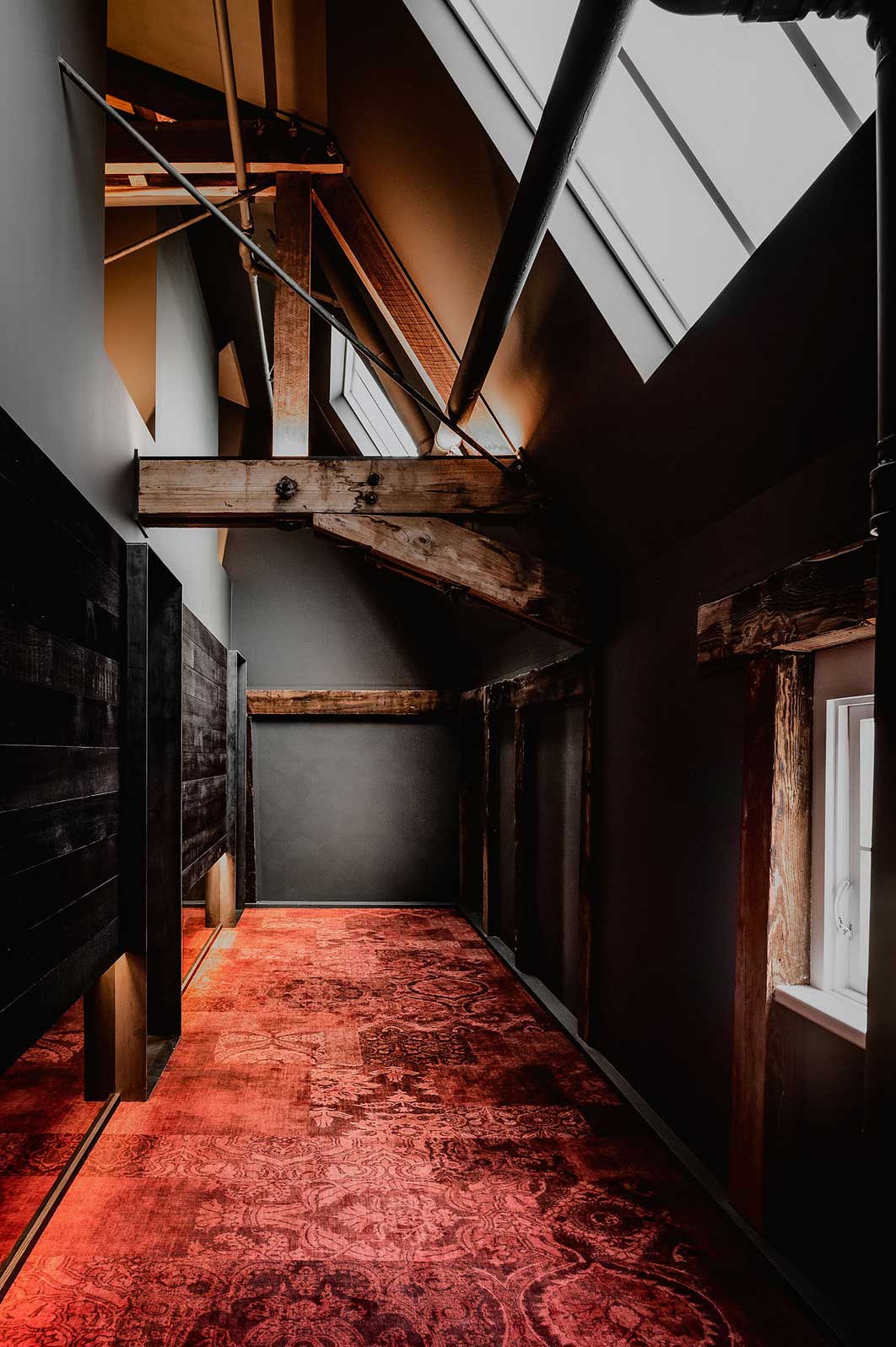 The property was then purchased by Kim Seagram who established a restaurant and has now created another persona for the mill through the development of the hotel offering. Cumulus Studio was awarded the project and interior design lead Amanda York has created a cool and sophisticated interior that pays deference to the building’s history through materiality and layers of design detail.

The hotel encompasses three levels with Stillwater Restaurant and one guest room on the ground floor and six more suites on the two levels above. Entry is at the restaurant and guests are then ushered to a discreet staircase at the side to ascend to the upper floors.

Over the first and second floors are six guest suites that present a unique interior experience as the original architectural features of the old mill have been retained and renewed. There is also a guest lounge on the first floor that features a custom-made counter and marble benchtop, an overhead cabinet with up-lit glassware and Patricia Urquiola’s Husk dining chairs (Space). Each of the suites comprises an entrance hallway, large bedroom, sitting/dining area and bathroom. 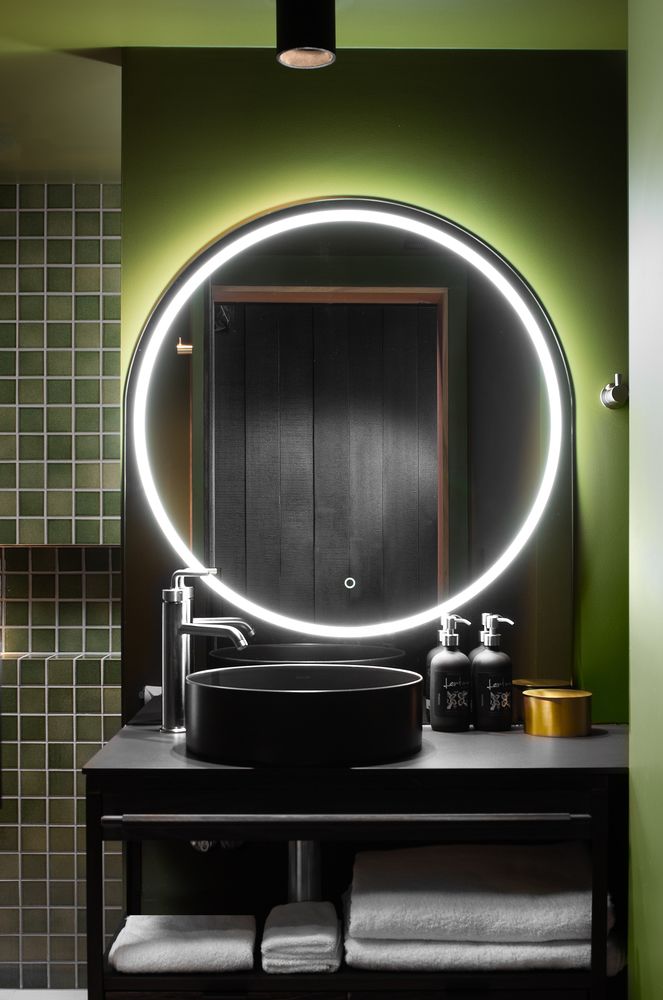 The colour palette was influenced by the very nature and history of the building and the charred Oregon beams become a simile for the Australian landscape that often burns red with fire and then regenerates with colourful new growth.

To reflect the palette, the interior walls and exposed ceilings of the suites are painted dark grey and the mix of partially charred black timber beams and trusses adds a unique material highlight to the integrity of the rooms. Ordinarily, this dark palette could be all too sombre, especially for constrained areas such as a hotel room; however, York has included silver grey sheers (Esther, Warwick) over black blinds on the windows for a touch of softness and the natural light bounces off the walls and reflects on the ceiling.

A textural multi-grey broadloom carpet (RC+D) has been laid underfoot and the pattern features historical elements and motifs that add another layer of detail to the interior. There are also pops of colour, with bathroom walls clad in either magenta or forest green sheet mosaic tiles (Academy) and there are smoky mirrors with an anti-fog coating and backlit LED mirror overlays that light up the space. 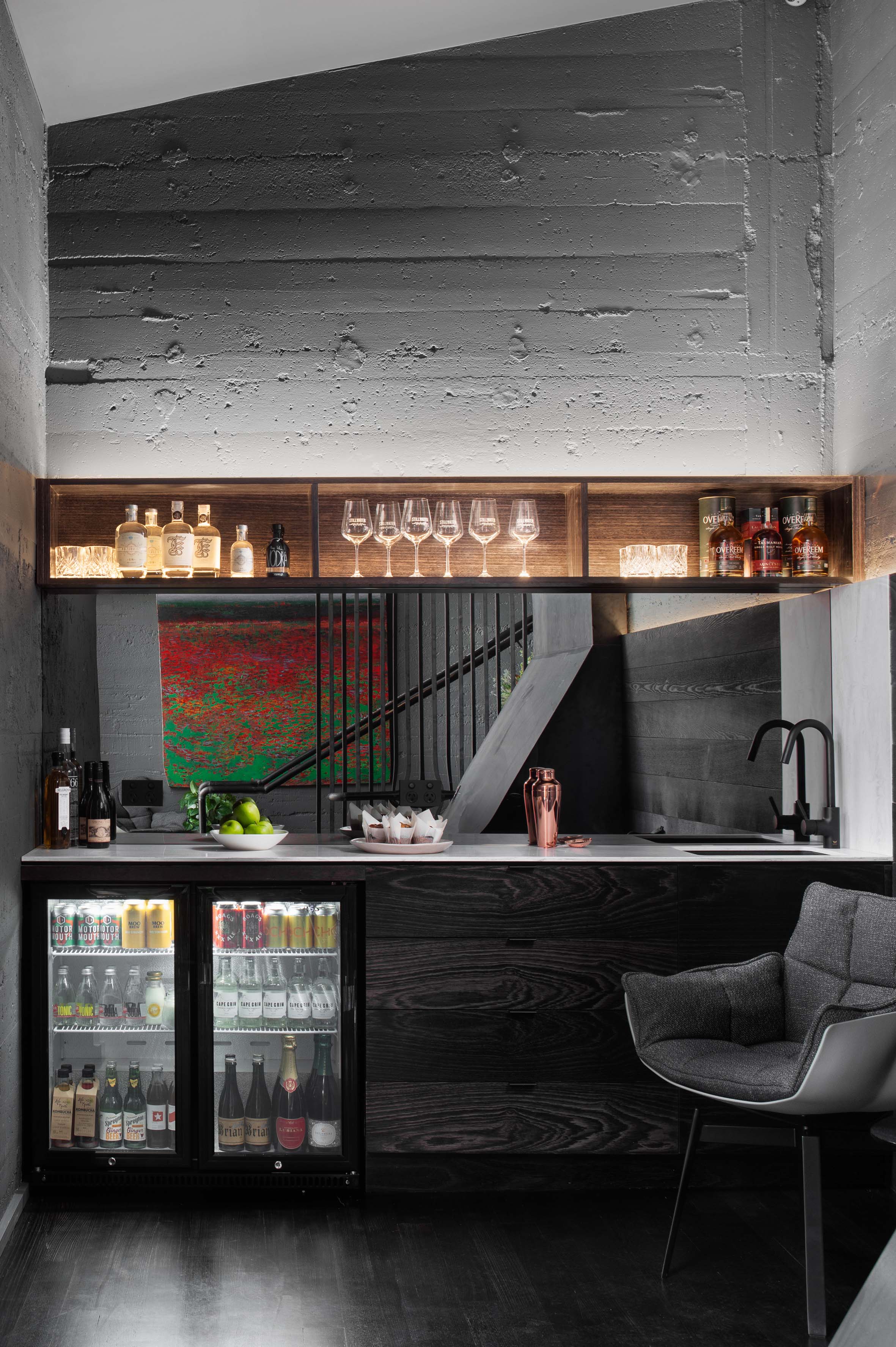 Bathroom fittings and fixtures are in brushed nickel (Buster + Punch) and, in another nod to the mill’s history, the style of the taps was chosen to reference a water pump.

York says, “Each room retains a sense of history that people can relate to and it was important that the guests are able to relax and be comfortable.” To facilitate this, each room includes an elliptical table that is large enough to hold two standard dinner and two side plates for those who wish to dine in-house, two chairs (Husk, Patricia Urquiola, Space) and a bespoke Tasmanian oak ‘pantry’ or cabinet that contains drinks and locally sourced gourmet snacks.

The cabinet, table and bedside tables were made by local artisan Simon Ancher and the design is timeless, while the workmanship is testament to his expert ability. York says that the interior is a “tactile and sensory experience” and that the design was one of “expansion and compression” where a small space opens on to a large area that then constricts again into a smaller space. 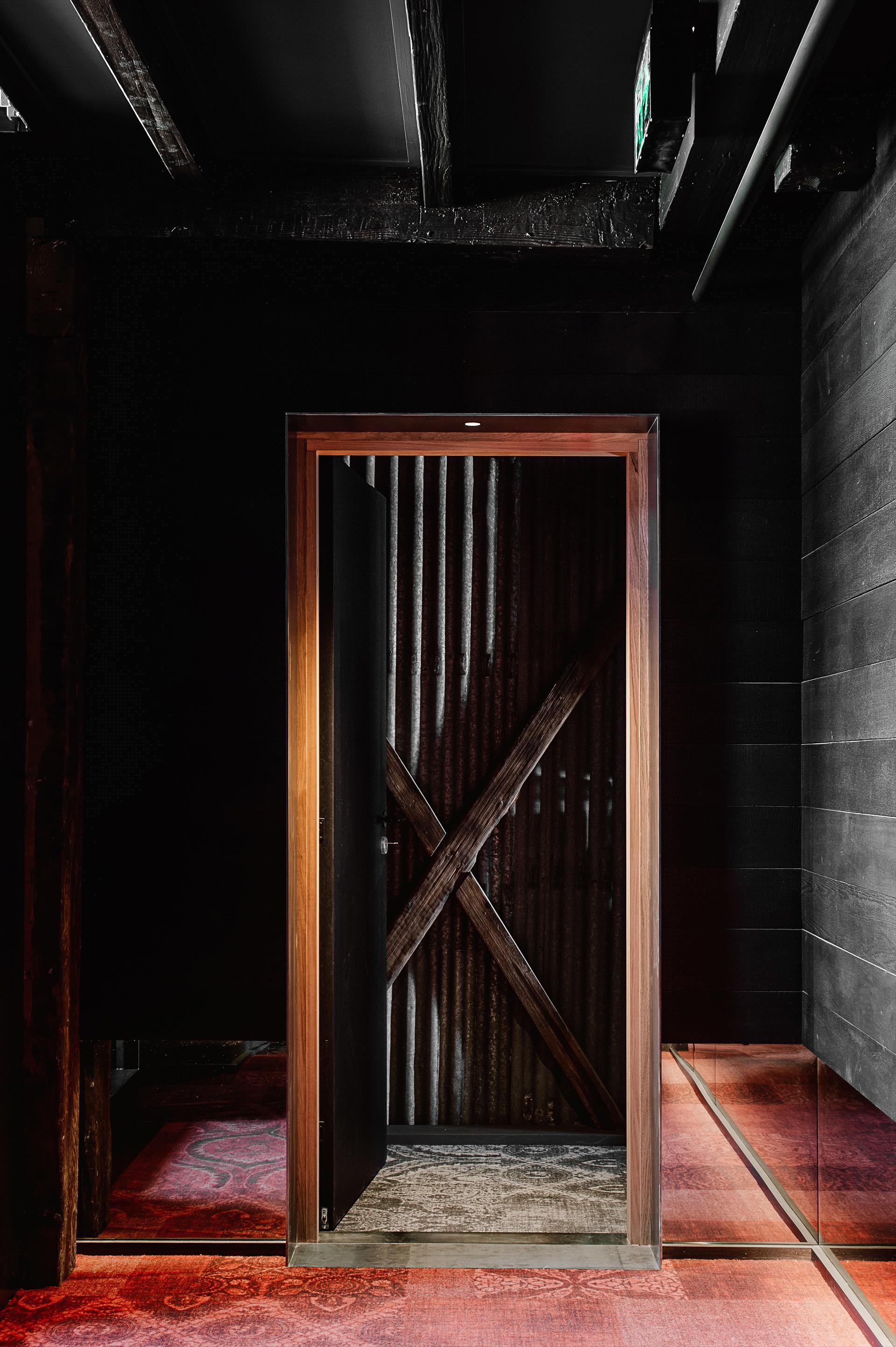 The hallway to each of the guest rooms is a point in case, where a bold red carpet (referencing the bright red front doors of the hotel) has been utilised to open up the walkway area and deliver the guest to the smaller doorway of their suite, which then opens to an expansive room.

On the ground floor, suite seven has been designed as a DDA (Disability Discrimination Act) compliant suite, suitable for those with physical disabilities or impaired sight and for greater flexibility of room use the handrails are removable. Stillwater Seven is a wonderful reincarnation of a once derelict building that has literally risen from the ashes and been reborn as a smart city hospitality venue for travellers. 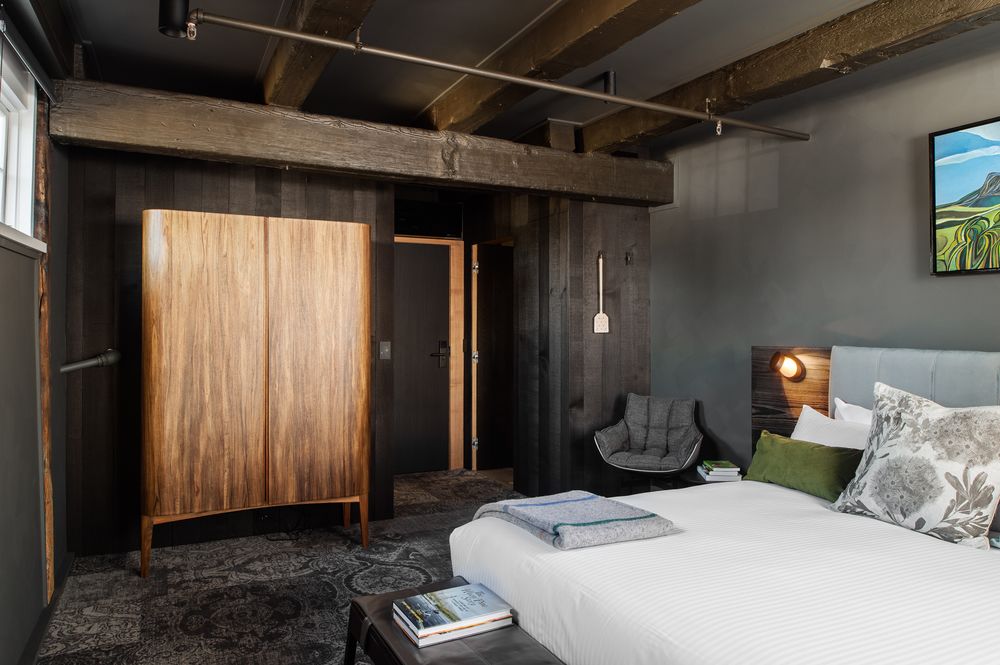 York says, “It’s more important what you leave out than leave in,” and the curated and pared back design of the interior is testament to the idea that less is more. Of course, it’s knowing the correct things to include or remove that makes or breaks a project.

The interior design was a well thought out plan to which designer and client adhered throughout the rebuilding process, and the design intention shows, with generous spatial planning and thoughtful and complementary furnishings.

This is a must-visit destination when in Launceston, where one can be surrounded by an historic design narrative coupled with modern day comfort and style. Cumulus Studio has embraced Heritage and delivered a unique offering that ticks every contemporary box.