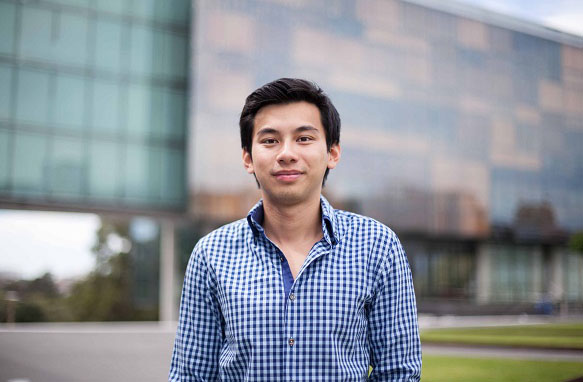 NSW Young Australian of the Year 2020 finalist and COX Architecture urban designer HY William Chan sits down with ADR to talk about why Australians don’t always appreciate architects or designers.

The self-described “cities innovator” was part of last year’s City of Sydney 2050 Expert Panel, where he presented to the Citizen’s Jury and advised on the development of the city’s future strategy.

“I think it’s an Australian cultural issue. I remember a conversation with someone where I was trying to advocate and showcase our profession and explain how architecture can actually make a difference to people. So I used one of COX’s examples, the Brisbane ferry terminal, which we redesigned as the world’s first flood resilient terminal.

“I remember the response of this very important person in society – she kept on questioning why design would make any difference to how people lived in Brisbane or used that infrastructure. Her biases were based on the idea that architecture and design are an extra. We don’t need them. Unlike other professions, including hers.”

A lot of the work Chan does seeks to disrupt this perception of architecture and design as superfluous. He says his inclusion in the Forbes 30 Under 30 list for 2019 is an example of this.

The project is one of many Chan is working on. It transforms plastic waste from refugee camps into useful 3D-printed objects designed by refugees. Chan presented it at the UN General Assembly last year.

“I think younger architects and the next generation aren’t waiting to get permission to explore another side of architecture,” he says.

“For me at least. I’ve just gone out and taken action and not really waited for anyone to tell me whether or not this is considered architecture. I’ve just done it.”

Chan says he was surprised by both his inclusion in the Forbes list and the category he was assigned – industry, manufacturing and energy.

“There’s no category for architecture. Nor designers. They have the ones that focus on the visual arts – sculptors, painters, photographers – but nothing to do with what we were about,” he says.

Still, he appreciates Forbes’ effort to acknowledge that “people in architecture can also make it, in their own way”.

He says it’s a sign public opinion towards architecture and design is changing, at least overseas. Similar changes are being reflected at the Venice Architecture Biennale.

“In 2018, organisers were criticised (for the theme FREESPACE, a word which describes a generosity of spirit and a sense of humanity),” Chan says.

“Even architects said, ‘Oh, hang on, what are you doing? Your theme has nothing to do with architecture. This isn’t architecture. You’re talking about people. That’s not what we do’.

“But this year’s theme (the challenges affecting architecture) is focused on people once more. On the influence that we have on people, on public space, on the publicness of a city. And that’s really exciting.”

As a young person in the industry, Chan says he feels responsible for changing the public’s perspective. He’s spoken about the role of architecture and design in society at both TEDx Sydney and the UN, and says he plans to continue doing so.

“People just don’t know what we can do until you actually engage beyond our bubble,” he says.

“Most people, if they do know what we’re doing, have an incorrect perception or at least for me it’s the wrong idea about what we’re about. (So we need) to start advocating why design is important.”

Read on for an edited transcript of our conversation with Chan.

ADR: How did you get into architecture?

HY William Chan: I have an identical twin, and basically he was the one who suggested architecture. I’d studied art, so I’d learned architectural history and about buildings, but I’d never considered it as a career. I knew I wanted to do something creative, so he suggested that I do architecture and I was like, ‘Okay, sure’.

ADR: It’s really interesting that you say you wanted to do something creative and then you moved past architecture and into designing smart cities. When did that happen?

HY William Chan: Very early on. I think I’m inherently someone who is interested in improving constantly, to do better, to do more and in a creative sense. Doing something like architecture, opened my mind up to understanding how we can do things differently. And understanding the process of the business of architectural practice, whether that’s when you’re winning work, how we get things built, at what level decisions are being made. I’ve realised that relates to stakeholders and people who have influence. And most times, it’s not within the rigid architectural design process at all.

ADR: Tell us more about the project that earned you a spot in the Forbes 30 Under 30 list.

HY William Chan: Since 2009, I’ve been working with informal settlements. I’ve had experience working in South Africa and India, basically working directly with communities and understanding solutions that are driven by bottom up design. A lot of it’s facilitation. A lot of it is participatory in a way that already disrupts the current practice of how architects deal with clients. Obviously these aren’t clients which have a lot of money, a lot of power and a lot of influence.

These are people who are vulnerable. And it’s about understanding how you make them the architects, since they actually know what their needs are. And at the same time, they’re empowered and capable enough to know what the solutions are. My role is a facilitator. It’s not top down, where I say, ‘I’m the designer’. I’m just going to draw you what you need.

Chan: A lot of the most innovative ideas, especially ones that respect people, are very simple. I think disruptive ideas are actually very simple ideas.

ADR: This builds on another project you worked on in Sydney, right?

HY William Chan: I did a post-occupancy evaluation of a new building in Sydney a year after it opened. It’s an apartment block of 100 units and it’s got a mixed tenancy model. Fifty per cent of the tenants are coming directly from the streets, formerly homeless. The other half of the population are low income tenants.

I interviewed them and I wanted to find out if this model was working and whether or not it was actually making a difference, especially for the formally homeless.

ADR: And what did the research show?

HY William Chan: The formally homeless people did improve on their social skills, but that didn’t come about because there were physically engaged with coming together. So the architects had designed a lot of common spaces, lounge areas where both populations can mix to foster interaction conversations and engagement, but none of it was ever used.

But the low income population still become active role models. They didn’t need to talk to each other. The (formerly homeless) knew their neighbours were waking up at eight to go to work, and because that gap wasn’t a huge one, they could aspire towards that.

This project was an example of community or social outcomes based on architecture, but not in the ways we know. The concept of, ‘Oh, we’ll design a space for them and they’ll use it’. Once again, that’s very top down. Instead, it’s about actually understanding the social dynamics that go on in space and how we design spaces for people.

ADR: You recently spoke at the UN about housing affordability?

HY William Chan: Yes, so I’ve just been to New York again, presenting at the UN Urban Thinkers campus. Obviously housing globally is becoming a really big problem, especially in terms of affordability. And so I’ve been working on a new build-to-rent model and approach that’s specific to Sydney.

ADR: What does that involve?

HY William Chan: It looks at doing developments where people can only rent and the drivers of why people would want that. But at the same time, it ask, ‘Can we ensure that community is at the heart of these development?’ In other words, ‘Can we make developers selfish for community?’

ADR: How do you make that sort of model attractive? Because you’re still competing with normal market apartments for rent

HY William Chan: It comes down to design. That’s where architects can play a role. Not so much on the financial mechanisms and the models, but in terms of design excellence. If we were to design a product that people want, people will stay. Simple again, right? But how do you design something that people want? Rather than doing a top down model where it’s, ‘I’m an architect. I know what’s best for you’. Why don’t you help the actual people who will use it? The end-users. So the model actually looks at renters co-designing with the developers.

HY William Chan: I’ve talked to architects about this proposal – quite well known Australian ones – and most of them have reacted strongly against it.

ADR: But it makes sense because the architect’s not living in these apartments. The end-users are. If they’re not happy, they’re not going to stay.

HY William Chan: If they are involved, if they feel like they have ownership, they are going to stay. And isn’t that what developers want? It means better lives for the renters.

The Australian dream is changing in terms of home ownership, but a model like this actually giving people options, which we currently don’t have at all. You buy apartments only if you can, which is out of the way for most young people, and then you end up buying apartments that have defects or are about to collapse.

ADR: And the outcome?

HY William Chan: Tackling all of these issues, but very much putting design excellence in terms of the role of an architect and what architecture can do and should be doing into that bigger process of what it means to people.

If you think professionals in Brisbane do not appreciate architecture or design, please think again! You have industrial designers who appreciate both, and transcend both. Pay attention!!

I think your comments are very ill informed. “The Public” (me) and architects as well as other design professionals (i.e. Industrial Designers) have a huge appreciation for design in Oz. You young people need to get over yourselves… Seriously. You did not invent good design. You just think you have. Get over yourselves.