Home • Architecture • The art of designing a theatre 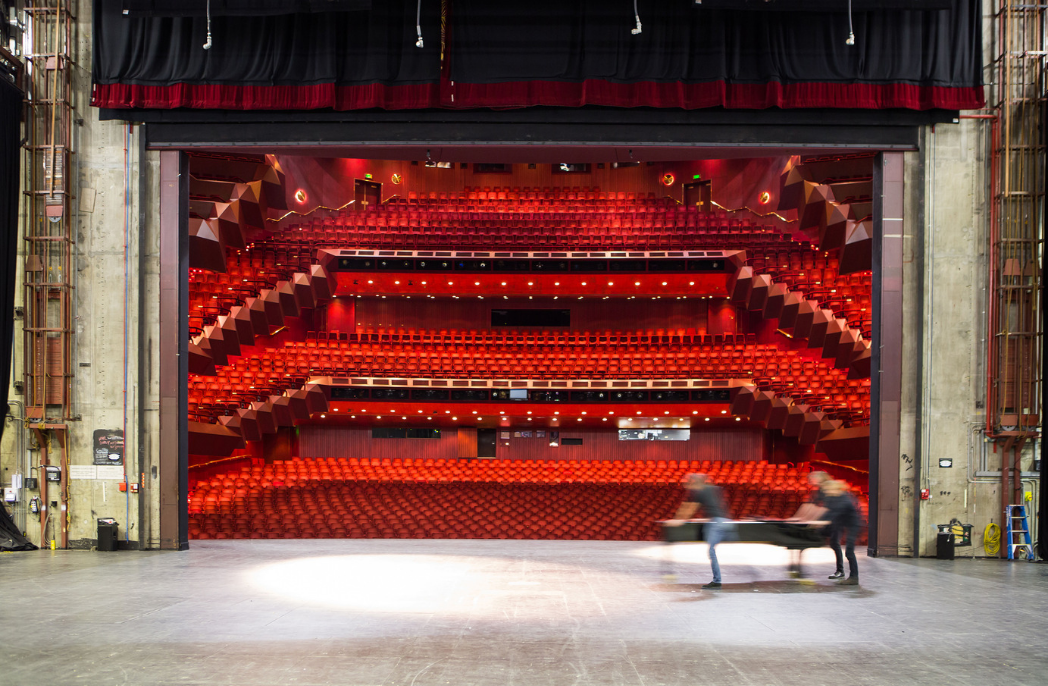 Hamish Lyon, director of architecture and design at NH Architecture, was thrilled and a little overwhelmed when the practice was appointed to work on the redesign of Arts Centre Melbourne’s (ACM) Theatres Building.

“I’ve been visiting the arts precinct since I was a kid and I’m still a very regular visitor,” he beams with pride. “I mean, it’s a major cultural icon and a legacy project over which Sir Roy Grounds casts a fairly long shadow. The idea of participating in that sort of generational conversation, the biggest since the postwar period… well, any architect would have to say that’s a fairly exciting proposition.”

A huge project that will remould the bones designed by Grounds and adapted by John Truscott, it will leave an indelible mark on the Victorian capital as part of a larger plan to better connect the various cultural institutions clustered around St Kilda Road.

Working arm-in-arm with ACM, NH has also collaborated closely with stakeholders from the state government to Heritage Victoria as well as regular presenters, including the Melbourne Theatre Company, Melbourne Symphony Orchestra and the Australian Ballet.

While that meant a lot of meetings, he was thrilled by their contributions. “The people in the creative arts and theatre industries are certainly more in tune with the idea of vision and design, and the ACM team has been extremely good at explaining their ideas, because they are all performers in a way,” Lyons says.

Working in tandem with Norwegian practice Snøhetta, one of the key inspirations for the evolving ACM master plan was the Oslo Opera House. Sloping down to the waterfront like a gleaming iceberg, it’s a building clambered over by patrons and pedestrians alike. Lyons believes this fusion of public and performance space is a brilliant approach.

“Rather than being an elitist thing within the city, they wanted to open the Opera House up to a wider community,” he says. “Their remarkable building is so democratic you can’t just go in it; you can walk all over it, and it’s increased patron rates by an enormous amount.”

He hopes to capture some of that magic by opening up ACM to the leafy tram-trundled street outside.

“At the moment, there’s a perception, if you stand on St Kilda Road, that it’s a bit fortress-like… and then there’s a bit of threshold anxiety when you walk in and have to immediately take the escalators down. The reimagining process is really trying to think how we can open up the building so people feel welcome to come in.”

Once inside, NH wants to light the way. “We have to protect the Truscott sense of going into the subterranean, but at some point introduce a sense of natural daylight penetrating the lower levels. Even within a dark cave, you can find a pinpoint of light so you know that the world is still there.”

He notes a shift away from the old idea of coming to a theatre for a show then leaving immediately after. “The traditional idea of sitting in an auditorium in the dark, looking through a proscenium arch, is still very valid, but you can also think of performance as being far more extended and inclusive of the whole building, including foyer spaces.

That makes the design process more exciting, but also more challenging, because you have to provide capacity for pop-up performances.” Lyons hopes a more inclusive design will broaden the audience too.

“The Arts Centre [team] are very conscious of being incredibly inclusive, engaged with First Nations people to talk about the Indigenous history of the place. And they’re interested in really connecting with young people too, encouraging them to come in after school, tap into the Wi-Fi and hang out.

“It’s that sense of making a much stronger relationship between the energy and vibrancy of the city and what’s happening inside the building. They both exist, but at the moment they are probably just not connecting strongly enough.”

A Carlton local, Lyons was dismayed at the news of the intense fire that gutted La Mama Theatre’s Faraday Street building in May last year. A much more intimate space compared to ACM, it’s no less important in Melbourne’s theatrical landscape, sparking an immediate outpouring of grief on the streets around its charred remains.

One of those mourners was sometime La Mama house manager, performer and occasional set designer Meg White. “I was shocked and devastated,” she recalls. “To see the building in that state was absolutely gut wrenching, because La Mama is a home. It’s like a sponge that absorbs you and you find yourself never quite leaving.”

White technically left La Mama to pursue an architecture career, following her fascination with the physical realisation of design through an architecture degree at RMIT, and then on to a stint with Cottee Parker Architects.

“I worked on a lot of big projects, public spaces, streetscapes and retail areas with similarities to theatres, but with a much broader audience.” Sucked in by that sponge, White still designs sets for the company, most recently for Carolyn Bock and Helen Hopkins’ Hallowed Ground: Women Doctors At War.

“We were actually rehearsing that morning and we just had to give up and go there.” She was a perfect pick, then, to work in tandem with Cottee Parker on the La Mama rebuild. “I just said ‘yes’ straightaway. Anyone in the La Mama community just wanted to see it get back up and running again, so we can all go back to creating raw theatre you just don’t get as readily elsewhere.”

While they all wanted to maintain the cosiness of the space, the enforced rebuild created an opportunity to make the building more accessible, and also to wrap the hallowed old bones with a subtle new structure housing admin and rehearsal space.

White’s personal insights helped her to address the peculiarities of a theatre worker’s space, and she has some advice for practitioners considering pitching for similar simplicity.

“You need to be patient, open and supportive, and able to think outside the black box. Try not to put too much architecture into the space. It has to stay flexible and open to be a platform for creativity.”

Most importantly, like Lyons she recognises that the industry is brimming with bright ideas. “Theatre people are, in my experience, incredibly talented, from multiple backgrounds. They often have alternative jobs because theatre, as we know, pays so badly, so they are multi-skilled. My top tip is to be open to their intelligent and nuanced understanding.”

The Brisbane studio of Conrad Gargett was brought on board late in the game to transform the black box space that was Queensland Theatre’s Bille Brown Studio into the Bille Brown Theatre, the city’s first corner stage.

Allowing for a considerably bigger audience, Ian Mitchell, a principal at the practice, and his team rose to the challenge, fitting a lot into a tight space, including replacing the traditional fly system with a nifty tension net.

Working to a tight budget and an even tighter timeline, the team knew David Williamson’s Nearer the Gods would be opening shortly after completion. “We had a very careful process of tendering and interviewing potential contractors, making sure that they understood that the project being delivered on time was the absolute imperative here,” Mitchell recalls.

Maximising what they could, they secured additional funding for extra flourishes along the way. “We managed to create a backstage area by cornering off a bit of a loading dock and some other smoke and mirrors, which was a lot of fun,” he recalls. “They were a fantastic client, and spent their money well.”

An increased focus on acoustics is vital when working on a performance space, but Conrad Gargett also utilised virtual reality technology to demonstrate all-important sightlines. “That allowed us to walk the client through the building in real time, and it was an absolute boon for both the client and the people mounting the production.”

While a theatre demands precise alignment, Mitchell and the team were able to play a bit more with the foyer. “You need to have an element of theatre about it, in terms of the impact people feel as they walk in. You can achieve that partly by lighting, and partly by the selection of materials.”

As with ACM and La Mama, the client was really engaged with the creative aspects of the project. “Artistic director Sam Strong was incredibly supportive,” Mitchell recalls. “We’ve worked on theatres before and to some extent we understood the language and were able to say to them, ‘This is what you must do,’ but we didn’t come along with preconceptions and they brought a lot to the design conversation too.”

Working together, they swept back the curtain with a view to the future of what this theatre will be able to do. “Theatre technology and how it is used is changing dramatically. I hope we’ve made enough provision that they will be able do all sorts of things with it as time goes on.”