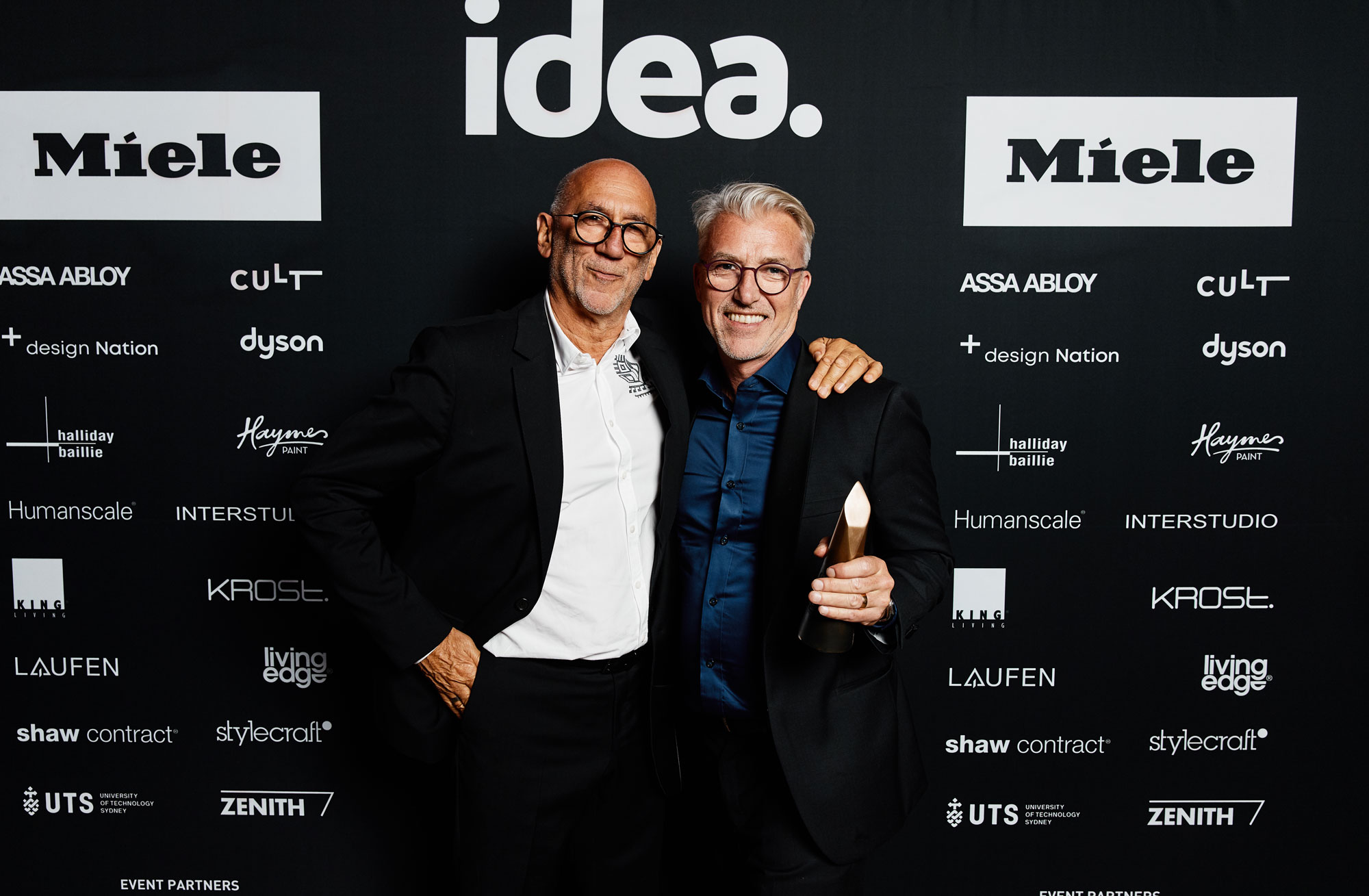 The IDEA 2019 Gold Medal is awarded to someone who has contributed their talent to enriching the design landscape of Australia. This year’s winner is the formidable Andrew Parr, founder and director of SJB Interiors.

Growing up around modernist homes along the Yarra River, Parr became intrigued with the work of Robin Boyd and his contemporaries.

His very first commission was to design the family home in Templestowe. Just 16, Parr drew up the floor plan before passing it along to his father’s friend, architect Ian Barr. The minimalist design influence was decidedly Graham Gunn, but the palette came from Parr’s grandmother and mother, who both embraced modernism and colour within their own homes.

Parr admits he was drawn to the interior design industry because he felt like the architectural process took too long. Describing himself as impatient, he enrolled at RMIT where he achieved his bachelor of interior design. His first position was with renowned Melbourne architects Synman, Justin and Bialek (who later became SJB) and he’s been there ever since.

One of the first projects Parr worked on was a fitout for Grey Advertising and Clemenger, which won the practice accolades and a wealth of boutique and bespoke interior design projects came flooding in.

That led to the prestige hospitality project for Crown Casino in Melbourne. This three-year undertaking provided a springboard to success for the newly formed SJB Interiors, and for Parr personally, who was bringing projects to the practice in record numbers.

Resisting the impulse to theme the interiors, the casino’s aesthetic went to the roots of modernism, to Europe of the 1920s, for inspiration. The interiors were handsome, figural, exquisitely executed and exuded an Art Deco class.

After several years of much work, travel and life in Sydney, Parr decided to return to Melbourne and settle, and it was at this time that his love affair with high-end residential projects began to manifest in earnest.

His prowess in creating exciting bespoke and upscale residential homes is legendary, although his hotel commissions – which encompass multiple projects for Hyatt Hotels, the Royce Hotel, Art Series Hotels and the Adina brand in both Europe and Australia – is enviable. He is able to turn his hand to every design genre should the client request and the outcome is always the same, perfect.

His more than 1000 completed projects throughout the 32 years of his tenure with SJB have won countless awards and accolades. Moreover, his mentorship has shaped the talent of generations of interior designers who have passed through the SJB doors, including Greg Natale and David Hicks.

Testament to his ongoing professional life is the fact that his portfolio of current commissions is stronger than ever with some 50 projects on the drawing board at any one time. Parr has produced a body of work that is daunting and exhilarating in both size and stature. Many of the best residences in Melbourne have his design signature stamped on the entrance portal and there are many more in progress.

Andrew Parr has dedicated his life to design and creating interiors that sustain both his practice and the broader industry through his creativity and individuality. He is a credit to the industry he works within and is truly an extraordinary and worthy recipient of this year’s Gold Medal award.

Along with his prodigious talent, anyone who knows Parr will attest to his sense of fun and zest for life and it is these combined attributes that he brings to the fore in his professional career that marks him as a design icon of his time. Congratulations Andrew.