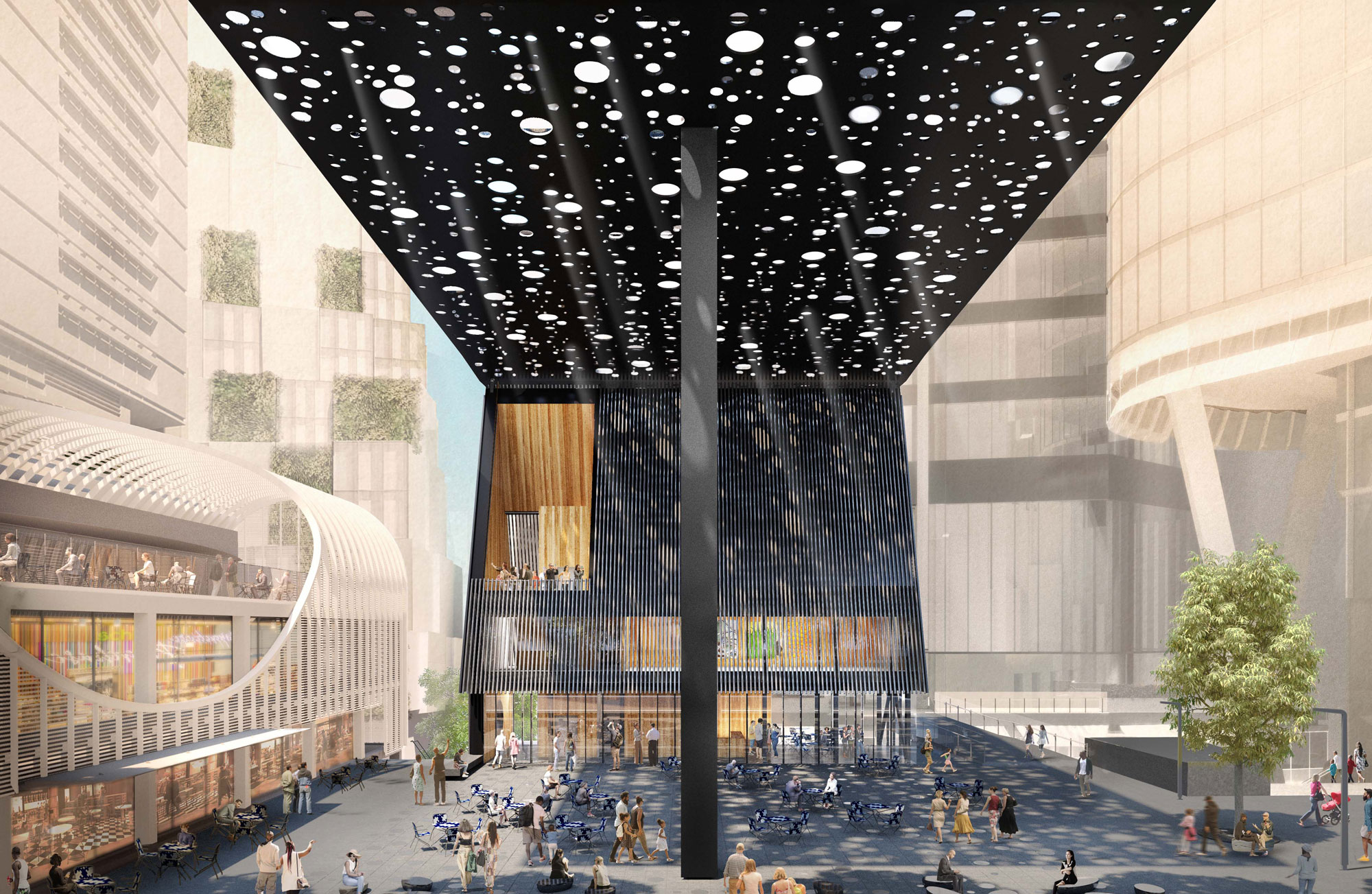 The pair drew inspiration from early settlers’s houses when designing the pitched roof of the new multipurpose building that will sit near George Street’s northern tip as part of the $3.7 billion transformation of the precinct.

The 200-square-metre building with viewing deck will include an open plan cafe and meeting and gallery space, while a network of lanes will lead through to Pitt and Alfred streets.

But the standout feature of the project is a suspended artwork that will sit 20 metres above the ground. The steel canopy supported by a single column will stretch out from the building and shield the 800-square-metre open space on the site of the St George Bank tower.

Made from perforated steel, the structure will filter dappled light through circular openings of varying size, animating the space with a moving pattern that reflects the night sky.

Chair of the City of Sydney’s Design Advisory Panel Professor Ken Maher AO describes the artwork as a welcome addition to the decade-long evolution of the Harbour City’s public gateway and one that will provide “an intimate moment in the life of the city”.

Adjaye adds that the Circular Quay precinct plaza will be “a generative place for people to connect, recharge, reflect and take a pause from the rhythm of a fast-transforming city”.

With studios is Accra, London and New York, Adjaye Associates is best known for designing the $540 million Smithsonian Institute National Museum of African American History and Culture in Washington DC.

The practice also designed Ghana’s first pavilion at this year’s Venice Biennale. Entitled Ghana Freedom, after the song composed by E.T. Mensah on the eve of the independence of the new nation in 1957, the pavilion examines the legacies and trajectories of that freedom by six artists across three generations.

Principal Adjaye was born in Tanzania to Ghanaian parents. He was knighted by Her Majesty the Queen for services to architecture in 2017 and met Boyd at the 2015 Venice Art Biennale, where the Sydney-based Aboriginal artist was exhibiting work as part of the headline exhibition, All the World’s Futures.

The first indigenous Australian to win the Bulgari Art Award, Boyd focuses his practice on images of colonial and postcolonial Australian-European history. In 2010, Boyd was commissioned by the Queensland Government Public Art Fund to produce a major sculptural work, Seven Versions of the Sun, for Kangaroo Point Park, Brisbane.

Boyd also designed the new memorial at the Australian War Memorial in Canberra commemorating the military service of Aboriginal and Torres Strait Islanders.

“The idea of a public plaza provided a great opportunity for David and I to work together on the concept of relationships – how we as individuals perceive our relationship to a particular place and how collectively those relationships play out in a space,” Boyd says.

“It provides a space of contemplation and diversity, a space to extend knowledge of experience – a multiplicity of experiences and narratives, currently extending back 60,000 years through the connection of the Gadigal people of the Eora nation. Acknowledging that we can never fully comprehend our past or future is the first step in reconciling differences
of perception.”

The $19 million construction costs for the plaza will be paid for by Lendlease. When completed, ownership will be transferred to the City of Sydney as a new public asset, which was part of the 2016 promise made by the company in exchange for securing more height on the Salesforce Tower.

Boyd and Adjaye were selected for the Circular Quay precinct plaza following an expression of interest process in 2017. Construction is set be completed in 2022.