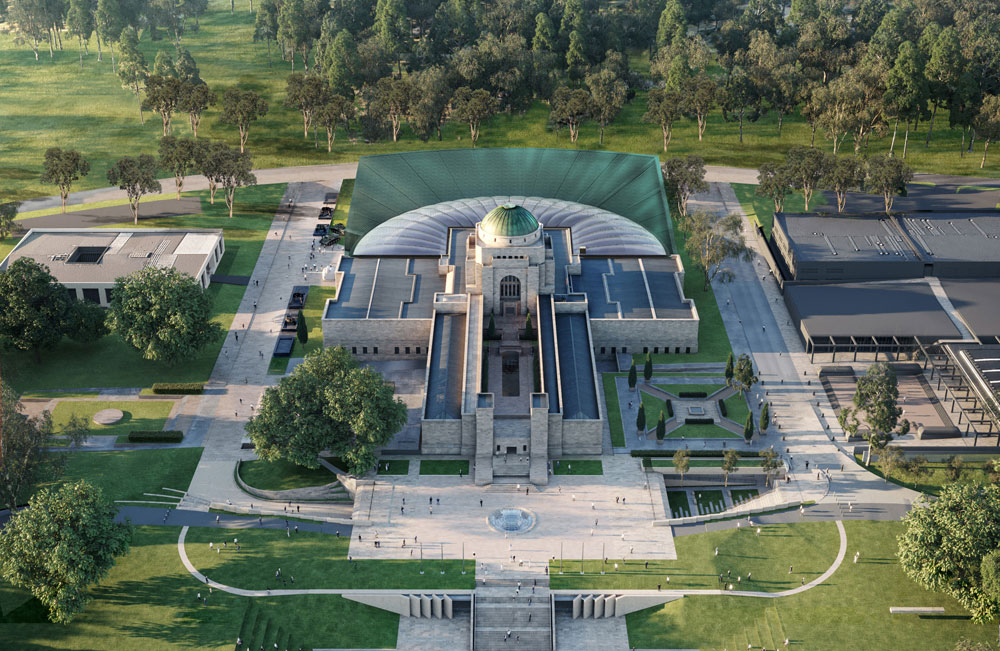 Located in line of sight of Australian Parliament House, the iconic building was opened in 1941.

Plans to renovate it brought about backlash when they were announced last year, after the Government revealed it would be demolishing the existing Anzac Hall, designed by Denton Corker Marshall.

Yesterday’s announcement upheld this decision, insisting it was the least complex, best value for money approach that would not threaten the integrity of the Heritage building.

The new Anzac Hall, designed by COX Architecture, provides an additional 4000 square metres of gallery space with the construction of a new two-storey building to house and display exhibitions, large technology objects and galleries.

The glazed link, also designed by COX, will strengthen and improve connectivity between the main building and Anzac Hall, and will host aircraft and armoured vehicles, a café and space for tours and events.

The expansion excludes the Heritage façades, which remain unchanged, but will see extensions to the Bean Building to establish a research centre.

Public realm works are also planned, along with the refurbishment of the main building, designed by Emil Sodersten and John Crust, and a new southern underground entrance – the latter designed by Scott Carver.

Carver describes the new entrance as “the beginning and end of the journey through the Memorial proper, and a place to orientate and connect, through both the physical and the intellectual. It is a place to commemorate those who served and honour who they are, to reflect on what they experienced and to understand the record they left behind”.

The new Australian War Memorial entrance will be created below the existing forecourt and connect through to the lower level of the main building.

The connection between old and new will be maintained through a new focal point, the oculus.

The design of the oculus draws upon the scale and detail of the dome to the Hall of Memory, its cone shape being an inversion of the dome, and its structure paying homage to the dome’s external finned structure.

The oculus’ glazed skin is inspired by the internal mosaic collage designed by Napier Waller, which adorns the internal skin of the dome in the Hall of Memory.

Through the transformation of the galleries and exhibition spaces, the War Memorial’s staff hopes to better tell the stories of the 100,000 Australian veterans who have served over the past three decades.

Preparations for early works construction to extend the underground car parking facilities on the eastern side of the Australian War Memorial have already begun.

It’s expected work on the new Anzac Hall will begin in the second half of 2020, with work on the southern entrance commencing the following year.

Work on the Australian War Memorial began in 2018 and it is anticipated it will be complete by 2027.

This will be the second war memorial to feature a COX Architecture design after the practice worked on the Sir John Monash Centre in Villers-Bretonneux, France.