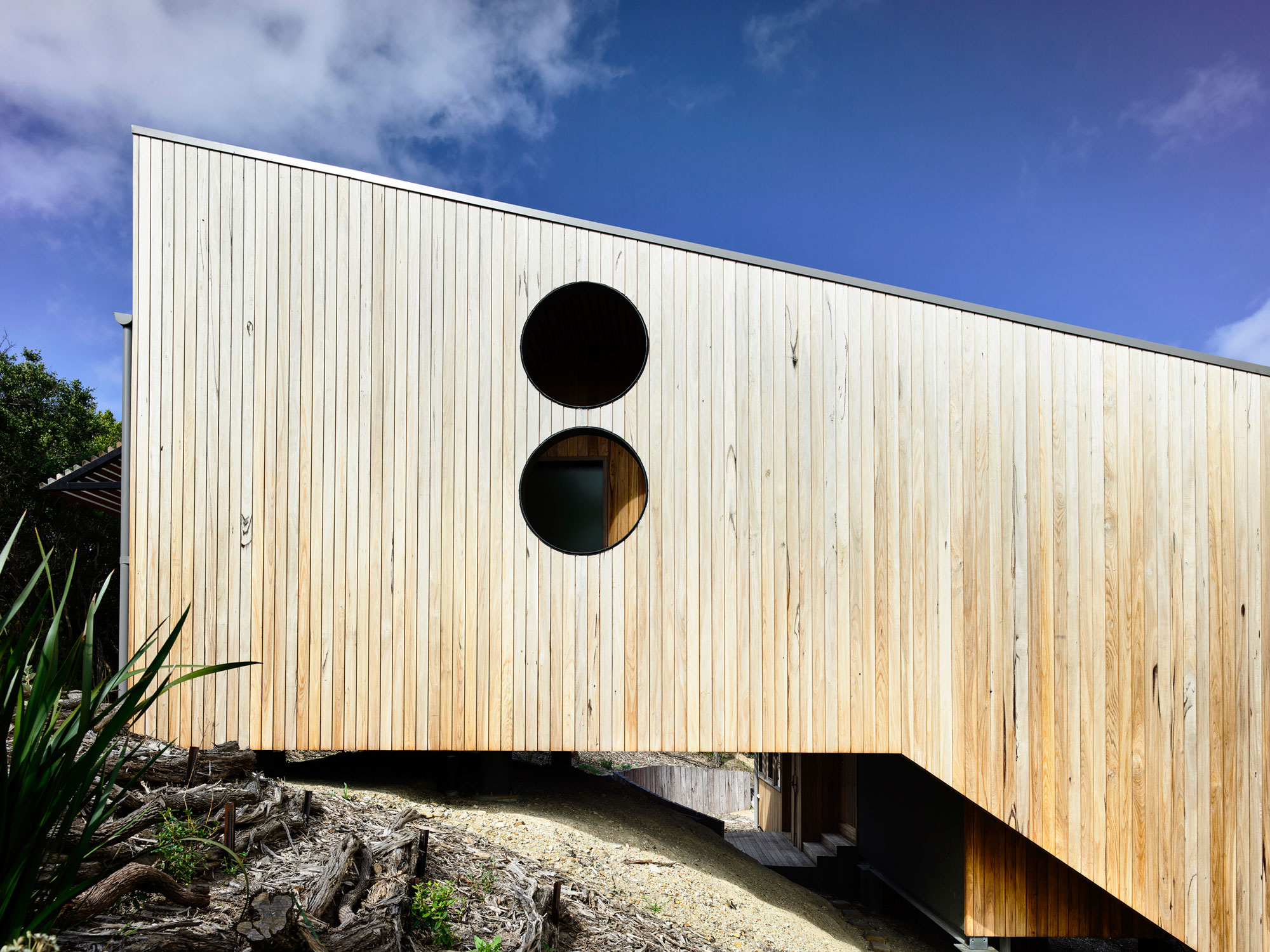 Here’s a look at five projects from Melbourne-based architecture practice Kennedy Nolan, which is shortlisted for designer of the year at IDEA 2019.

Since its inception in 1999, Kennedy Nolan has developed a reputation as a design-focused residential practice with a distinctive approach to built form.

The practice is dedicated to the production of architecture that is highly responsive to its context and has evolved to take on large scale multi-residential, mixed-use, retail, early childhood, primary, secondary and tertiary education projects.

In celebration of its work over the past 20 years, here are five of our favourite Kennedy Nolan residential projects. 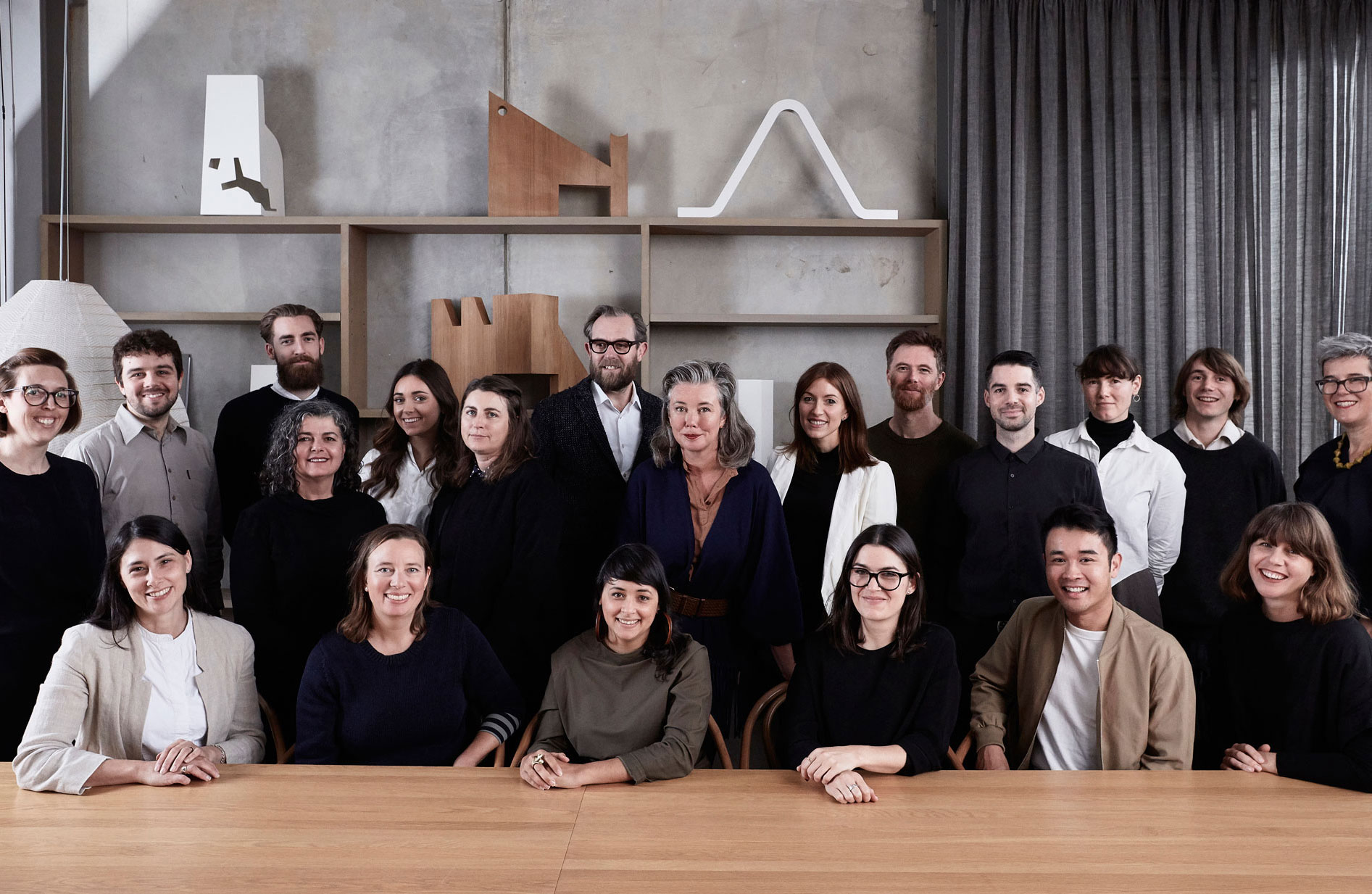 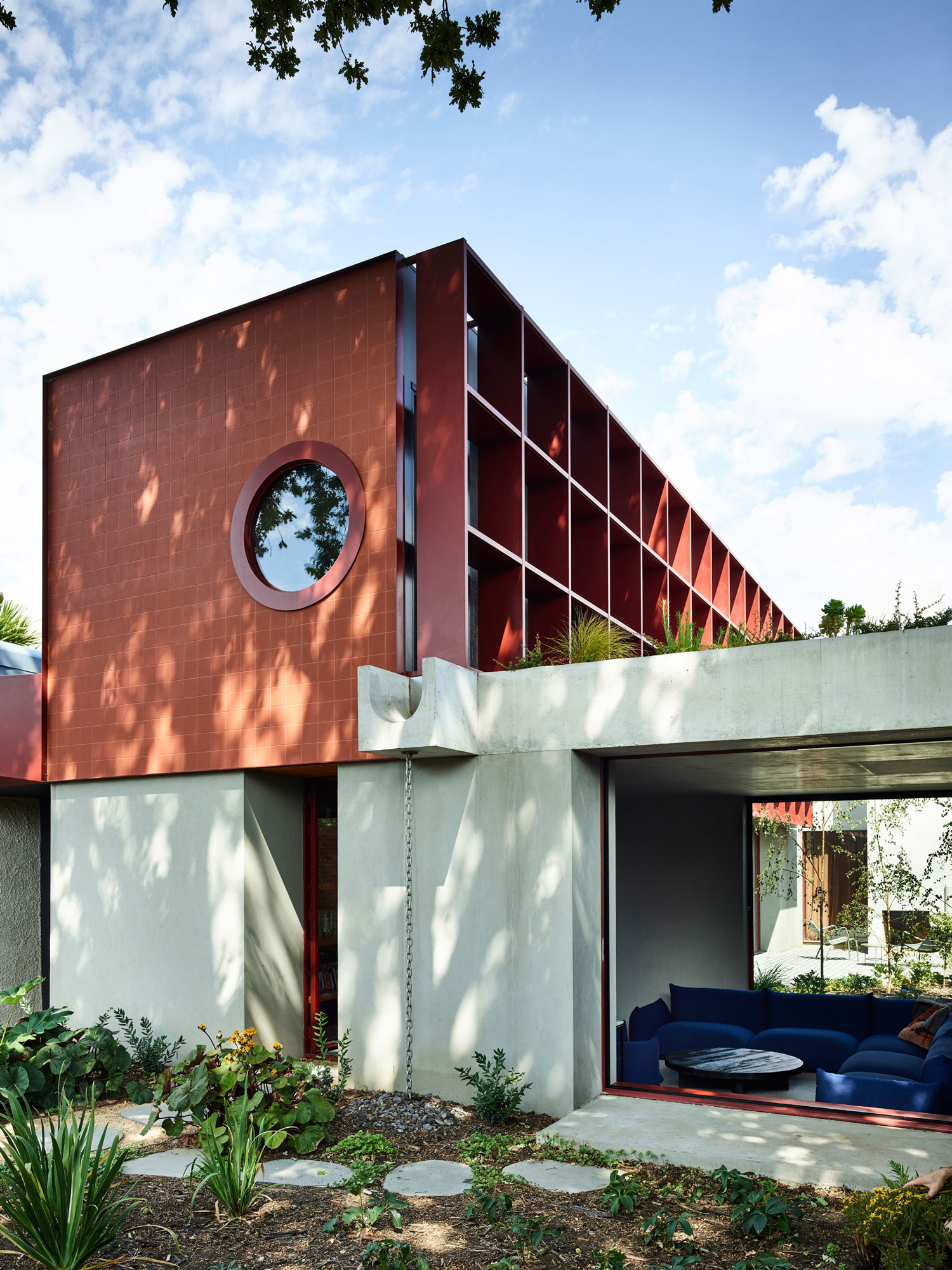 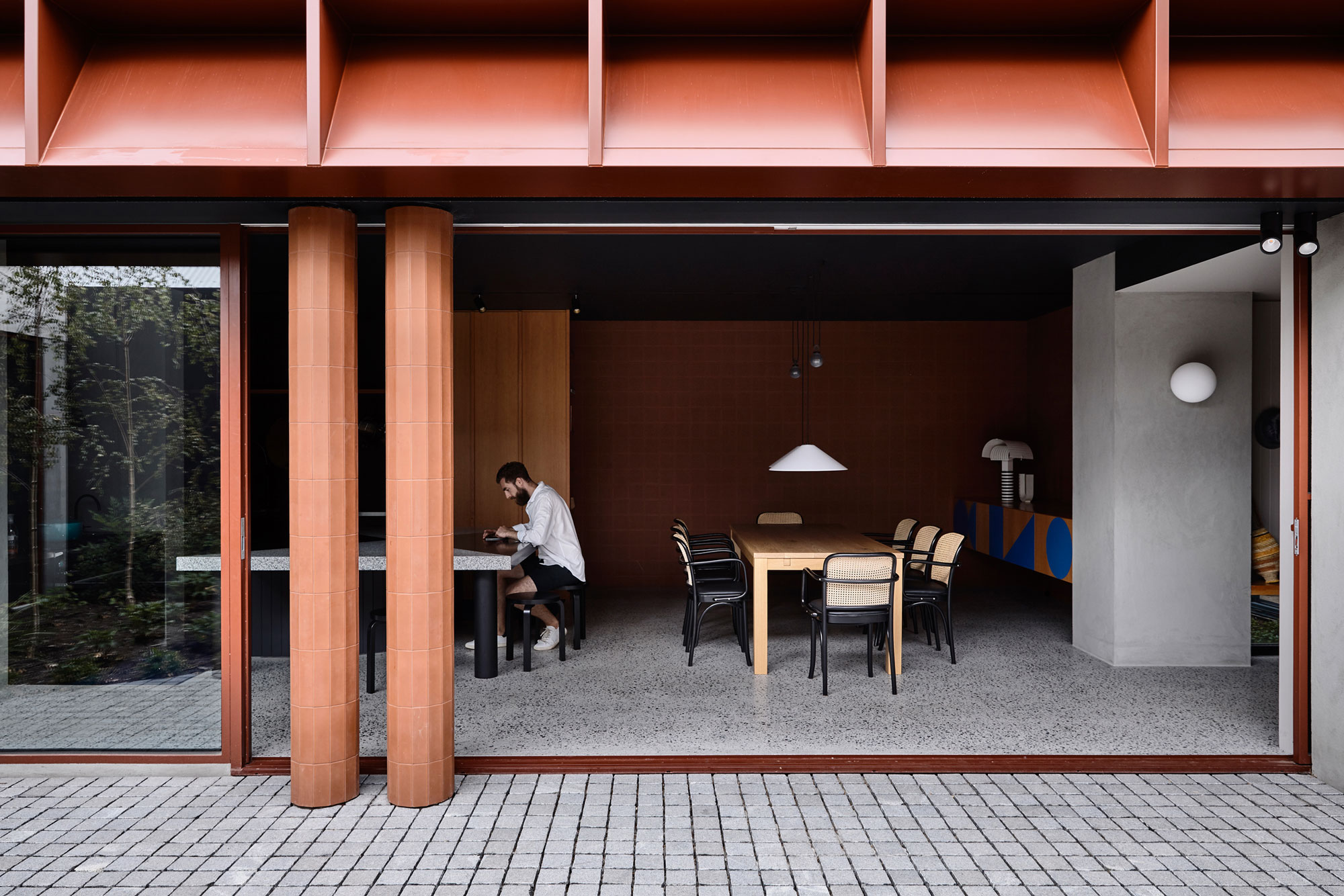 The considered and tasteful renovation of this double-fronted Victorian adds space and amenity, while creating a unified modern aesthetic that sits comfortably with the building’s original typology.

The home is reconfigured around a central courtyard flanked by sitting rooms at either end with the long edge incorporating the kitchen and dining room. The creation of separate living spaces with visual links across the courtyard allows the family to be apart without feeling disconnected.

A unified colour scheme of oxidised red, terracotta tiles and Douglas Fir helps pull the old and new parts of the building together. The interiors range from the dramatic to the tranquil using concentrations of colour in varying intensities.

The project exhibits expressive restraint to maintain formal and material cohesion throughout the house and resists the conventional blandness of lifestyle architecture to amplify a sense of joyousness and delight. 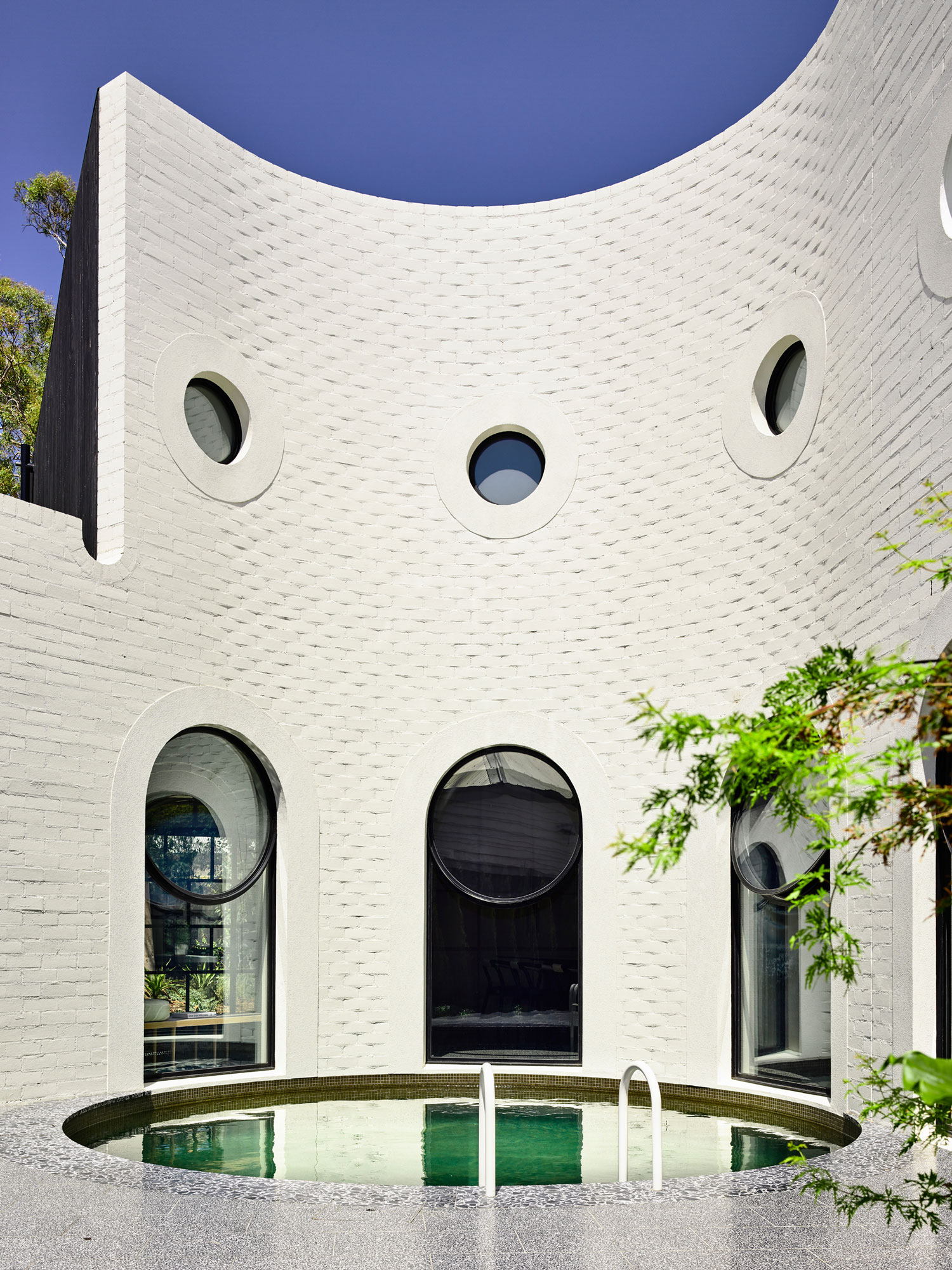 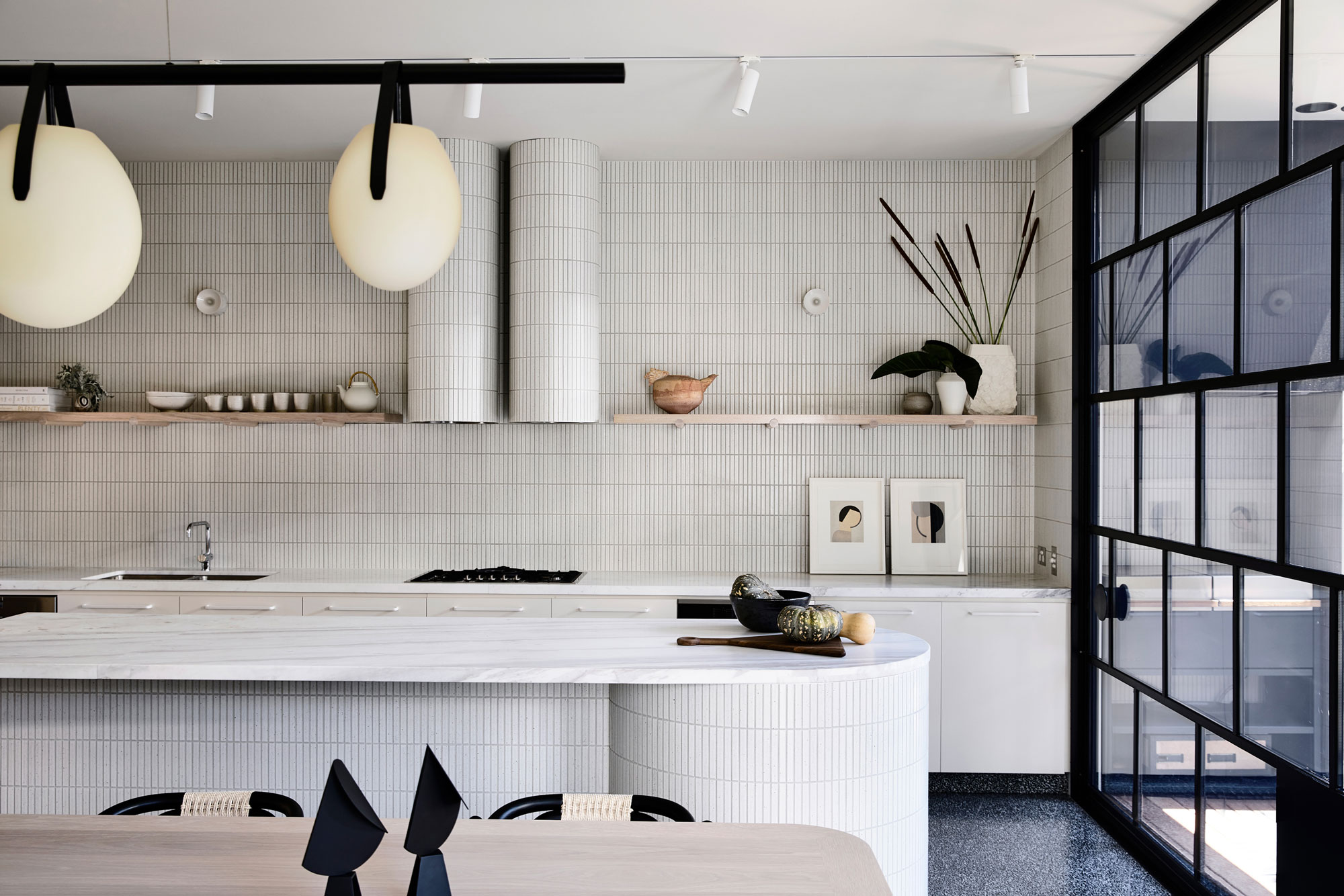 This award-winning alteration and addition to a weatherboard Edwardian home exhibits an eccentric formal quality where playful shapes find practical purpose to create a setting that is poetic and evocative without being specific.

At the centre of the design, both literally and figuratively, is a pool that challenges regular notions. It is round, it is compact, it is deep, it is dark. The pool plays a purpose year round. It used for swimming in summer and as a dark pond reflecting the building’s facade in winter.

The proximity of water to the interior is immediate and dramatic and gives you the sense that the edge of the building plunges into a deep pool.

While the design is whimsical, functional aspects are not compromised. The courtyard is able to fulfil the conventional requirements of passive solar design, cross ventilation is achieved and a northern orientation to rear rooms provides multiple garden views. 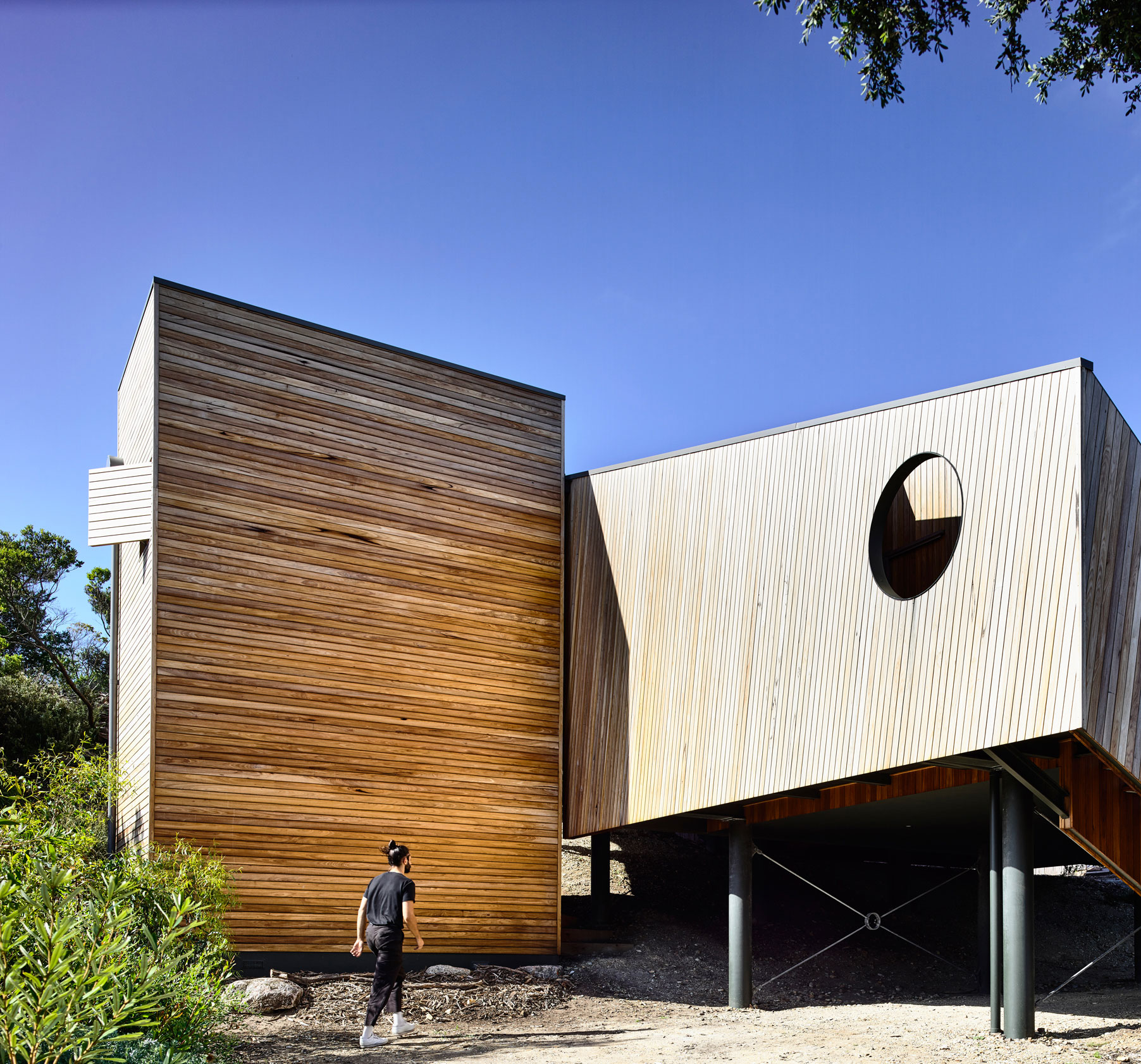 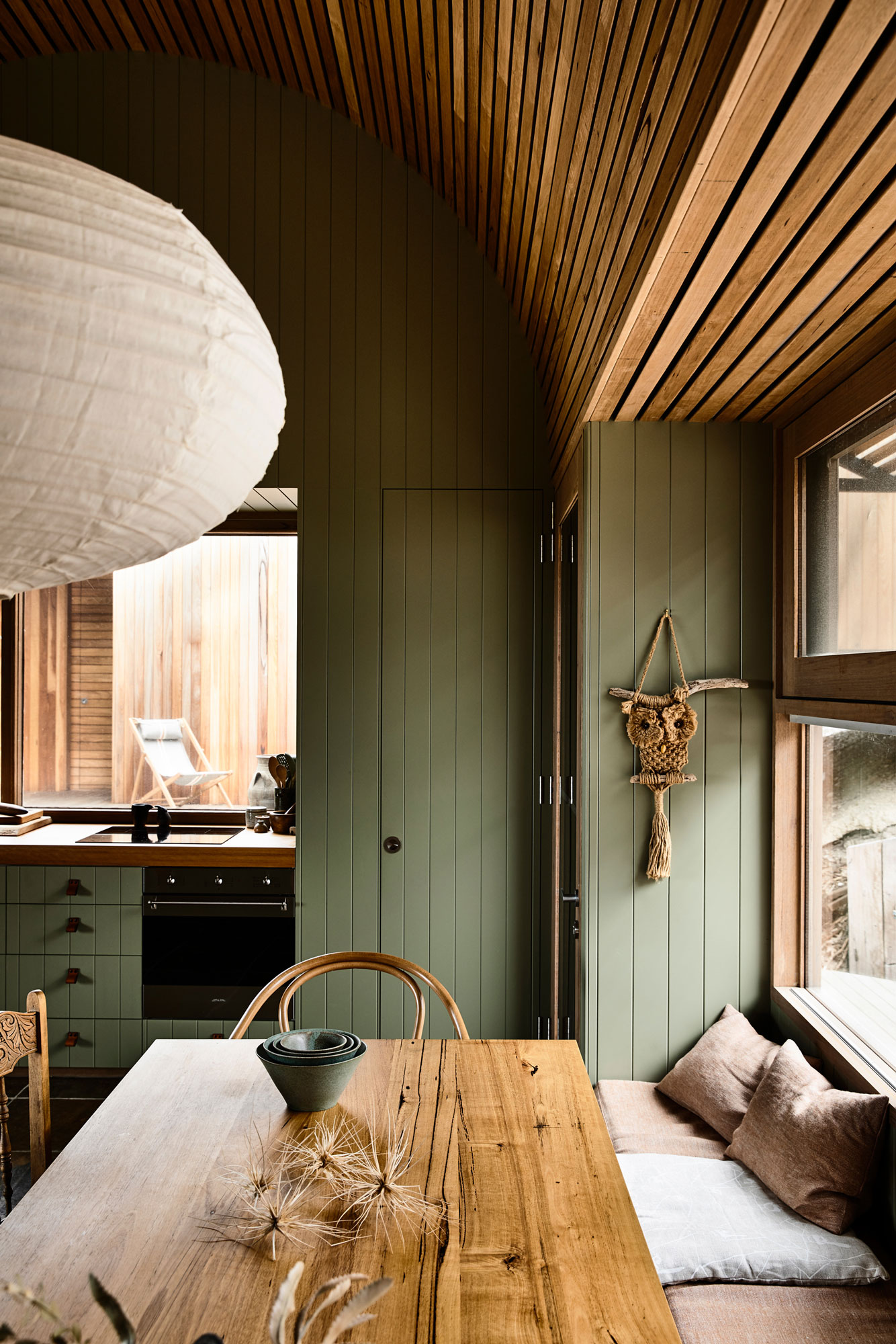 Located three hours drive from Melbourne, this beach house at Sandy Point is designed as a home for extended stays, regardless of the season, rather than just a fair-weather ‘weekender’.

Perched on coastal dunes, the house is principally built from timber designed to grey off and find camouflage in its indigenous plant setting. The result is a house that reflects and amplifies a genuine connection to place and is designed to evolve over generations of family holidays.

The ‘pinwheel house’ is arranged around a protected inner courtyard, a refuge from the prevailing winds and weather. The courtyard is like a cloister in that it provides a protected external connection between the four separate zones.

There are no internal connections, so you’re forced to go outside to move between the zones. This provides a sensual experience of place as you move from room to room; a view of the stars, a burst of cold air, the sound of a crashing ocean.

And, as the rooms that spin off the courtyard are arranged to reflect the terrain of the steep site, moving through the house feels as if the ground beneath your feet is shifting as you ascend or descend between rooms.

It’s a building deeply embedded in its landscape, derived from memories of family holidays past and a place new memories can be nurtured. 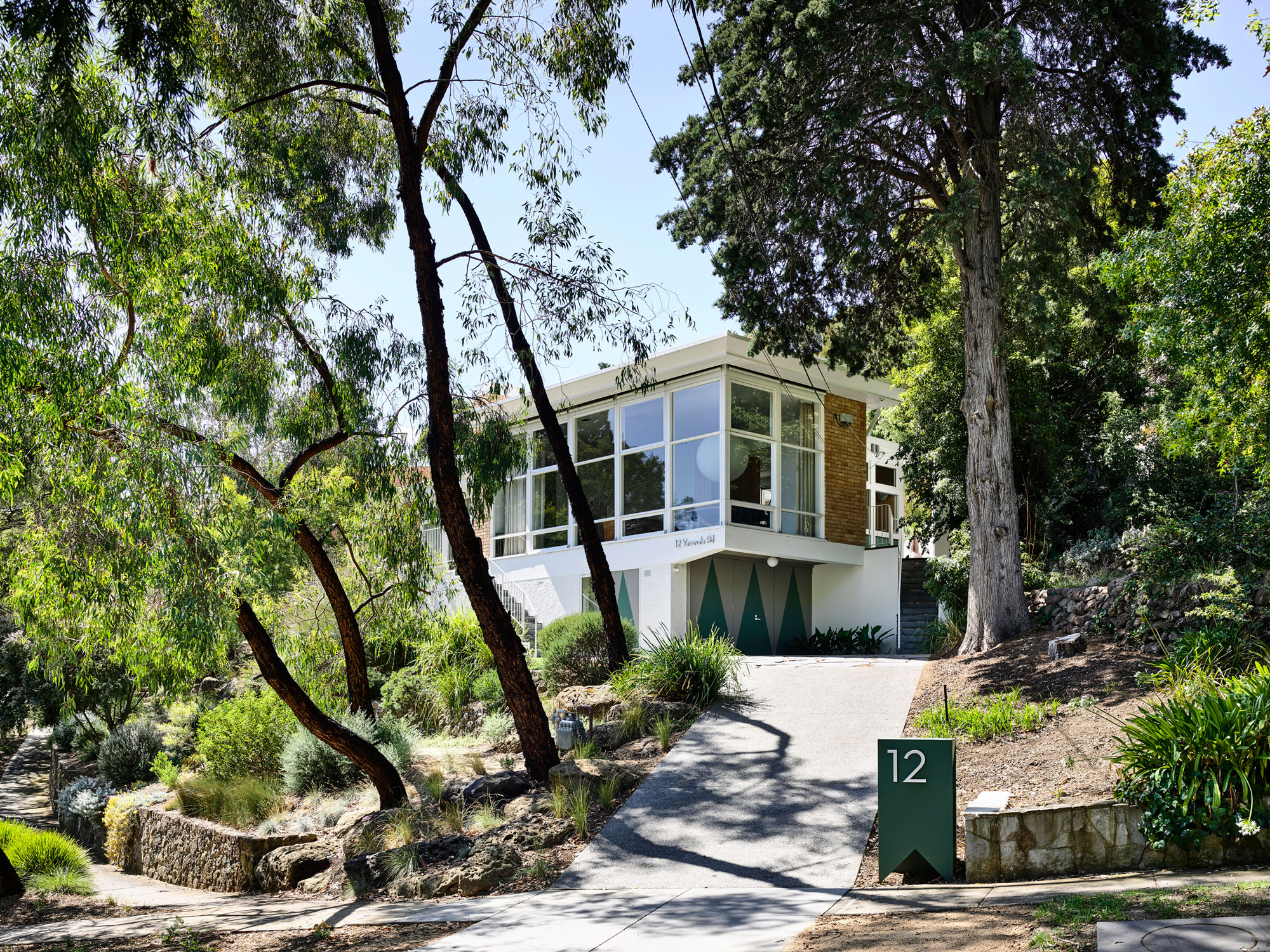 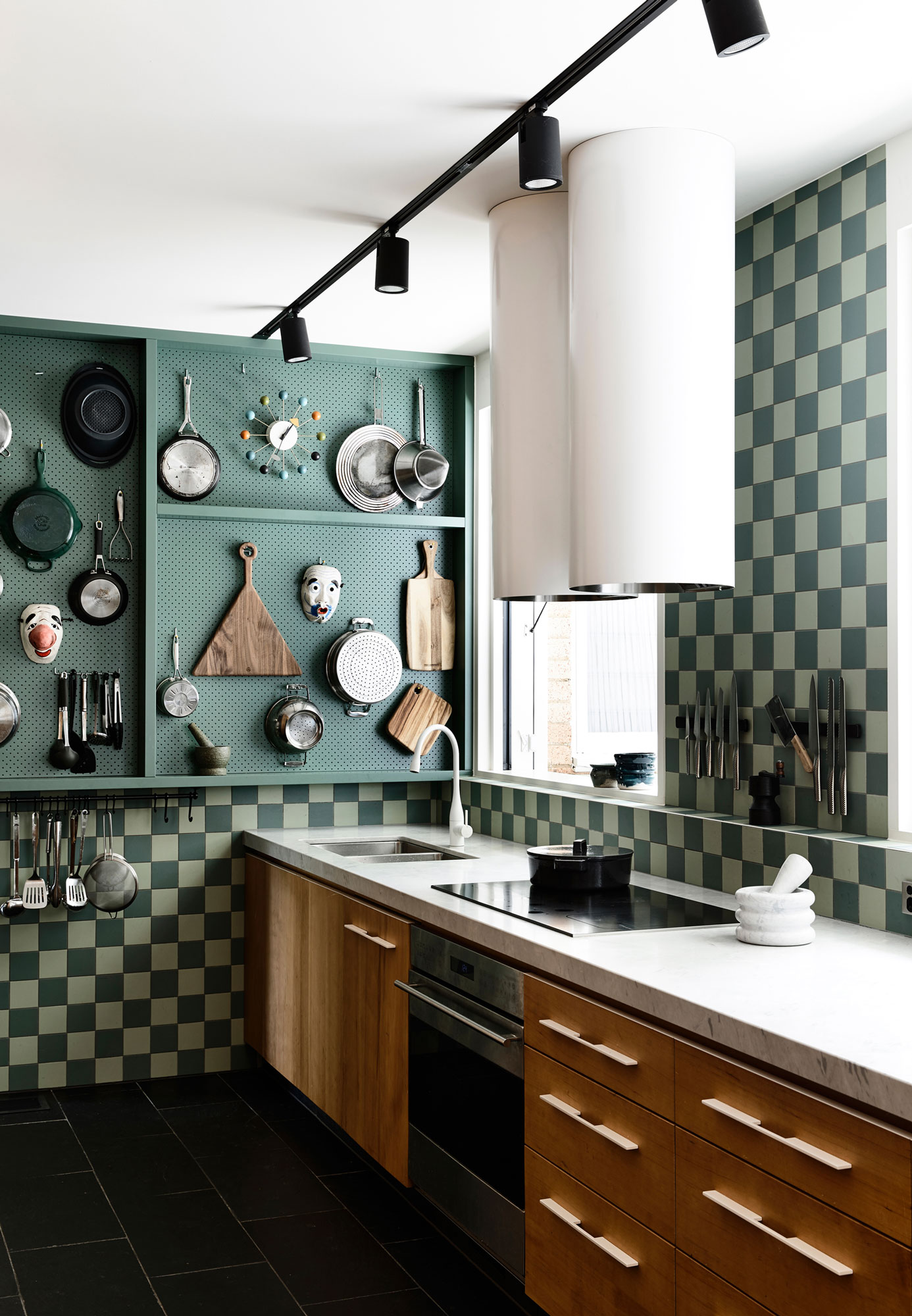 To keep with Kagan’s vision and aesthetic, Kennedy Nolan devised a palette and details that tempered the luxury of contemporary amenity to remain true to the austerity of post war Australian architecture.

Kennedy Nolan’s interventions cleverly balance inside and outside without compromising the legibility of Kagan’s exterior articulation. Small changes are deftly deployed in existing structural openings to improve visual and physical connections.

The front terrace has been expanded in the architectural language established by Kagan to provide a habitable space in lieu of the passive/decorative balcony and connections to the ground plane are expanded and improved. These changes represent an imagining of the trajectory of modernist ideas without compromising the visual qualities of the original heritage object. 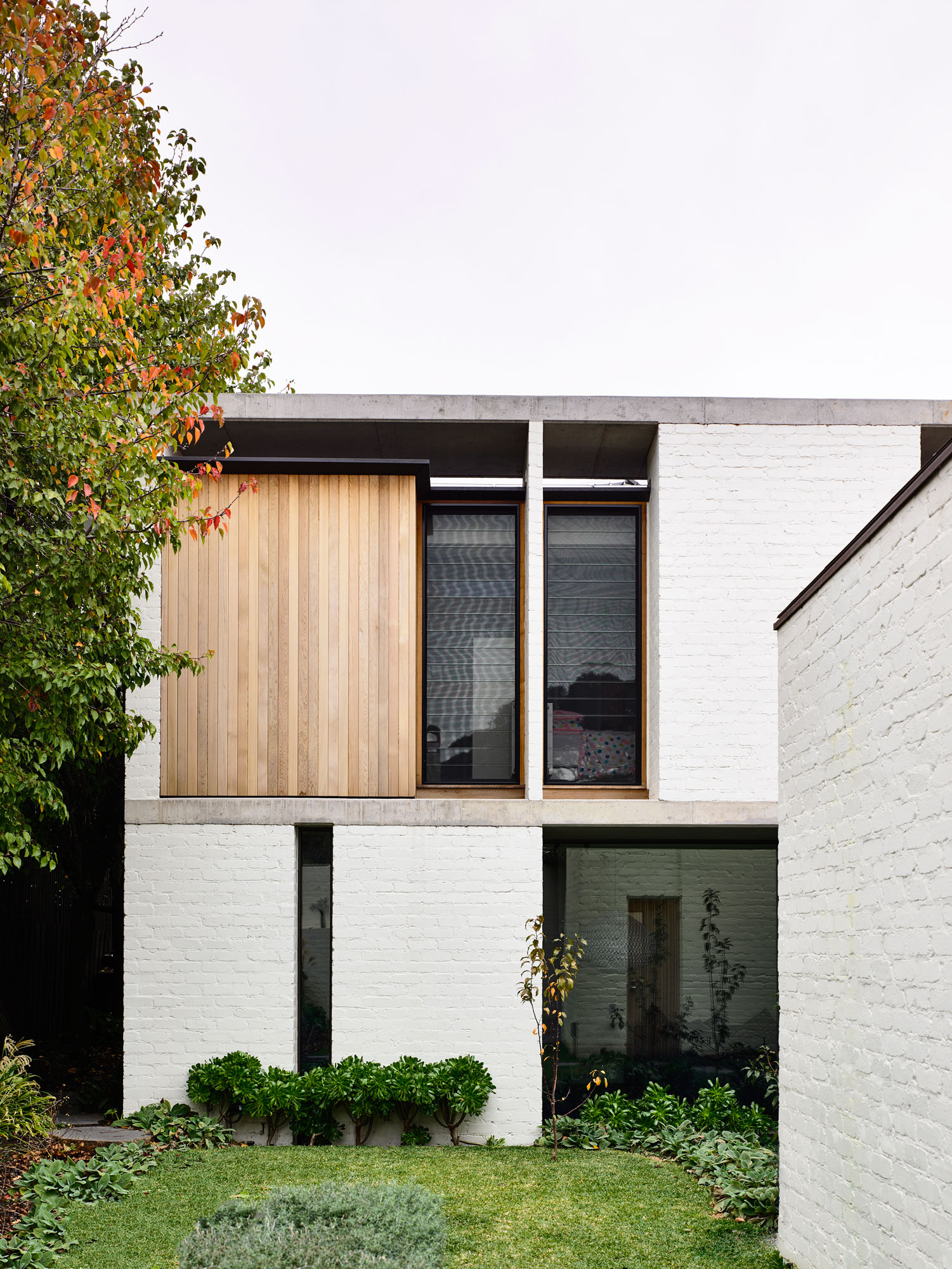 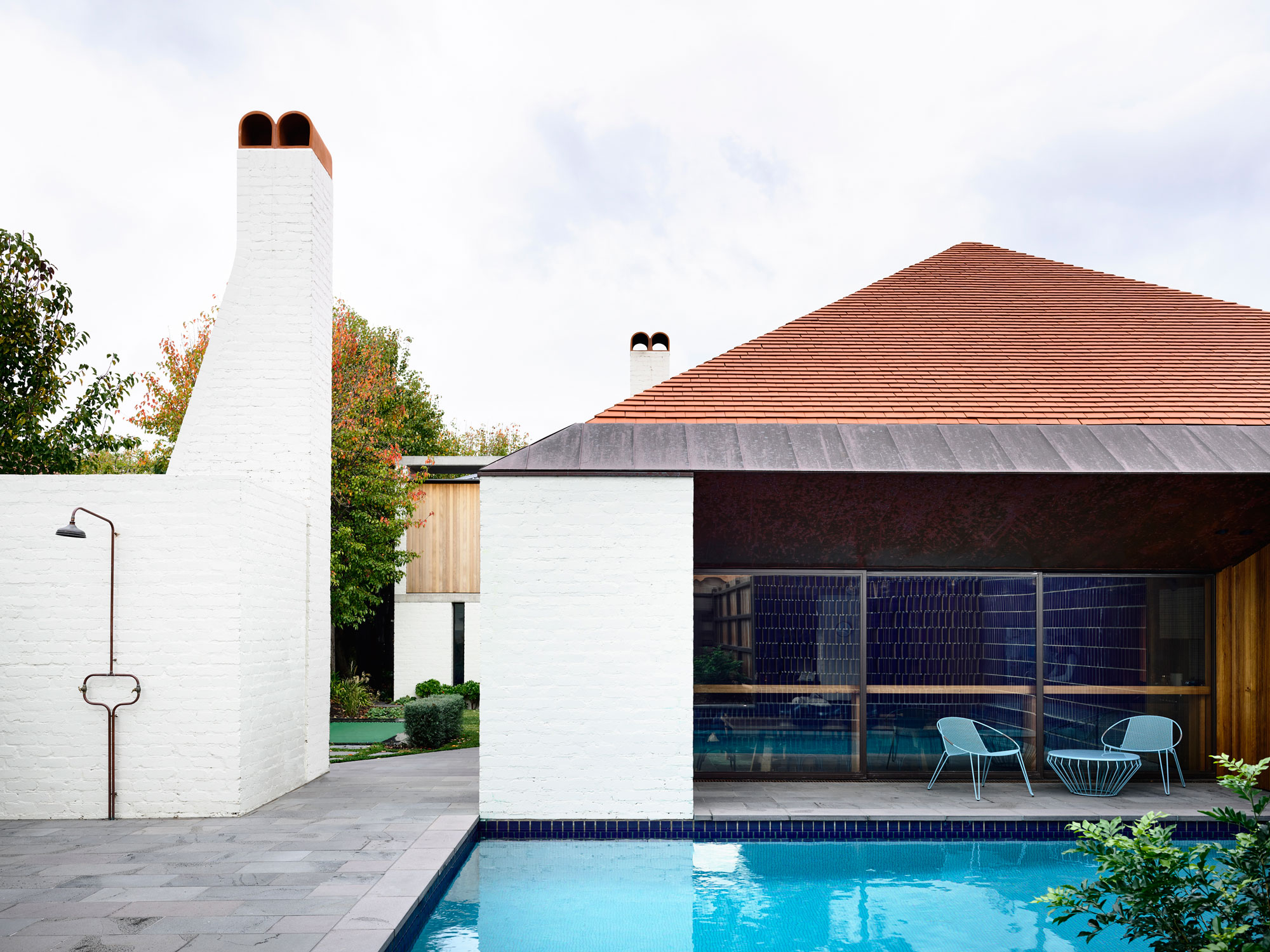 This highly-sustainable new home build for a family of seven in the leafy Melbourne suburb of Deepdene fits effortlessly into its predominantly Edwardian surrounds.

The house is carefully designed to respond to the character of its suburban setting, which Kennedy Nolan says is typified by roofs and chimneys emerging from lush tree canopies.

Like much of Kennedy Nolan’s work, Deepdene House exhibits whimsy, joy and beauty. The formally expressive chimneys with their handmade pots, the fragrant cedar-lined pyramid of the main living area, the heft and shadow of the brick and concrete rear pavilion and the intense colour and texture of the interior surfaces all contribute to a house that is much more than the sum of its parts.

Kennedy Nolan has been shortlisted for designer of the year at IDEA 2019. It’s up against Kate Challis Interiors, Alexander & CO., Arent&Pyke, Flack Studio and Mim Design.

See who will take home the trophy on 22 November at the Timber Yard in Port Melbourne. Tickets are now available. Be sure to get yours before they sell out.