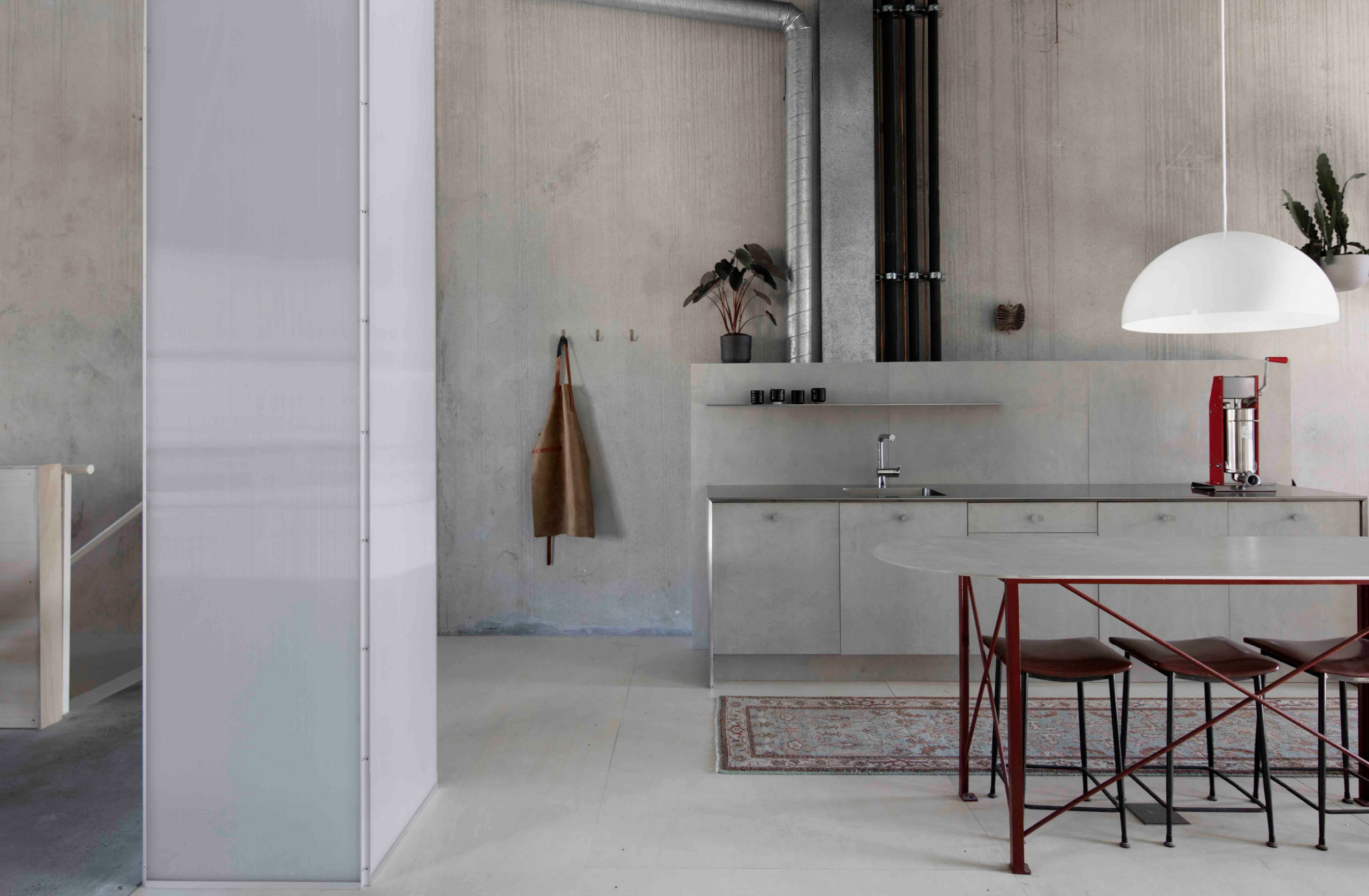 Before the coronavirus outbreak was a reality, I caught up with McNab in a bakery cafe on the outskirts of Sydney, and over lemon tarts and coffee, she walked me through the project that earned her the IDEA 2019 Emerging Designer of the Year award.

It was quite a surprise for the young designer, who only had three projects under her belt at the time, including her own Bondi Apartment (featured in this month’s edition of inside, on newsstands now) and the Marrickville Warehouse, which just so happened to belong to her partner.

“My partner is the sausage man,” she tells me.

“For years, he’d sort of outgrown the warehouse and there was a lot of potential to increase the space and storage,” she says.

The brief was more dry storage space and more processing space in the fridges downstairs. McNab’s partner also wanted to develop the warehouse into a showroom where he could leave all of his equipment and spices and have all of his products on display for customers to see.

“Being in the food industry and being a warehouse, the tendency is to be quite sterile. But we have sausage making parties and people come in and do classes, so that sort of set the tone.”

McNab placed the kitchen at the heart of the space with an open, warm and comfortable design. The idea was for people to gather, converse, cook and brainstorm.

Located on the first floor of the warehouse, the kitchen shared space with a specially designed sausage making room and interactive product display.

But it was its materials that attracted the IDEA judges’ praise with Russell & George principal Byron George saying he was “particularly impressed with McNab’s ability to create a sense of richness with the use of simple materials, finishes and tones, and the crafting of compelling spaces with minimal and thoughtful intervention.”

McNab chose materials best suited to withstand the salt used to preserve the natural sausage casings, the hardiness of a working warehouse and the specific food safety standards.

“He wanted a fresh take. So we removed the plastic and just got back to the basic concrete, exposing the services,” says McNab.

“I think that very much speaks to the trend of taking materials like concrete and detailing them in such a way that it does make them special, but still working to a budget because our budget was quite tight.”

Exposed raw concrete replaces the old plaster board walls, with stainless steel and plywood used for a no frills and fresh look consistent with the business’ focus on transparency and innovation.

On the first floor office, a plywood desk was paired with grey storage and a “multitude of plants” that strengthened the connection to the outdoors provided by the fixed windows.

The biggest challenge, says McNab, was to make sure the requirements were as good as they could be, especially on the ground floor, where the fridges and the passages were very dark, making them anything but an ideal workspace.

“A key thing for me was to make sure that everything had light. From the ceiling right down to the ground floor and through the workspaces downstairs.”

McNab addressed the light problem by creating an open balustrade to allow visibility and flow into the downstairs production area.

Translucent polycarbonate walls and lightwells spread natural light throughout the whole warehouse. Round portal windows also provide light into, and visual relief from, the confines of the refrigerated area. These features limit the need for artificial lighting and make the space more enjoyable to work in.

A new double height tonal green ceiling was integrated with pendant lighting to create both a lofty and intimate experience.

“I definitely kept going back to the concept of transparency and simplicity. Keeping the materials to a minimum was quite a conscious decision,” says McNab.

“The only colour we did was the green ceiling. And that acted as an opposite to the kitchen materials to seamlessly connect the different spaces with the kitchen.”

The remaining materials used in Marrickville Warehouse were inexpensive, robust and rich. Refrigeration equipment required for preservation of product consumed the bulk of the budget.

The stainless steel kitchen benchtop has a slender design with a shark tooth-edge detail. The fibre cement splashback works cohesively with the tone of the cabinet doors and concrete wall.

The polycarbonate panels, while commonly used externally, had the same robust, industrial feel.

McNab graduated from Auckland Unitec School of Architecture before moving to Sydney where she worked with Bruce Stafford Architects for seven years, while honing her skills as part of the support crew for Glenn Murcutt’s International Master Class. In 2018 she established her practice.

She is currently working on a number of new projects including a private yoga studio and a tapas bar.