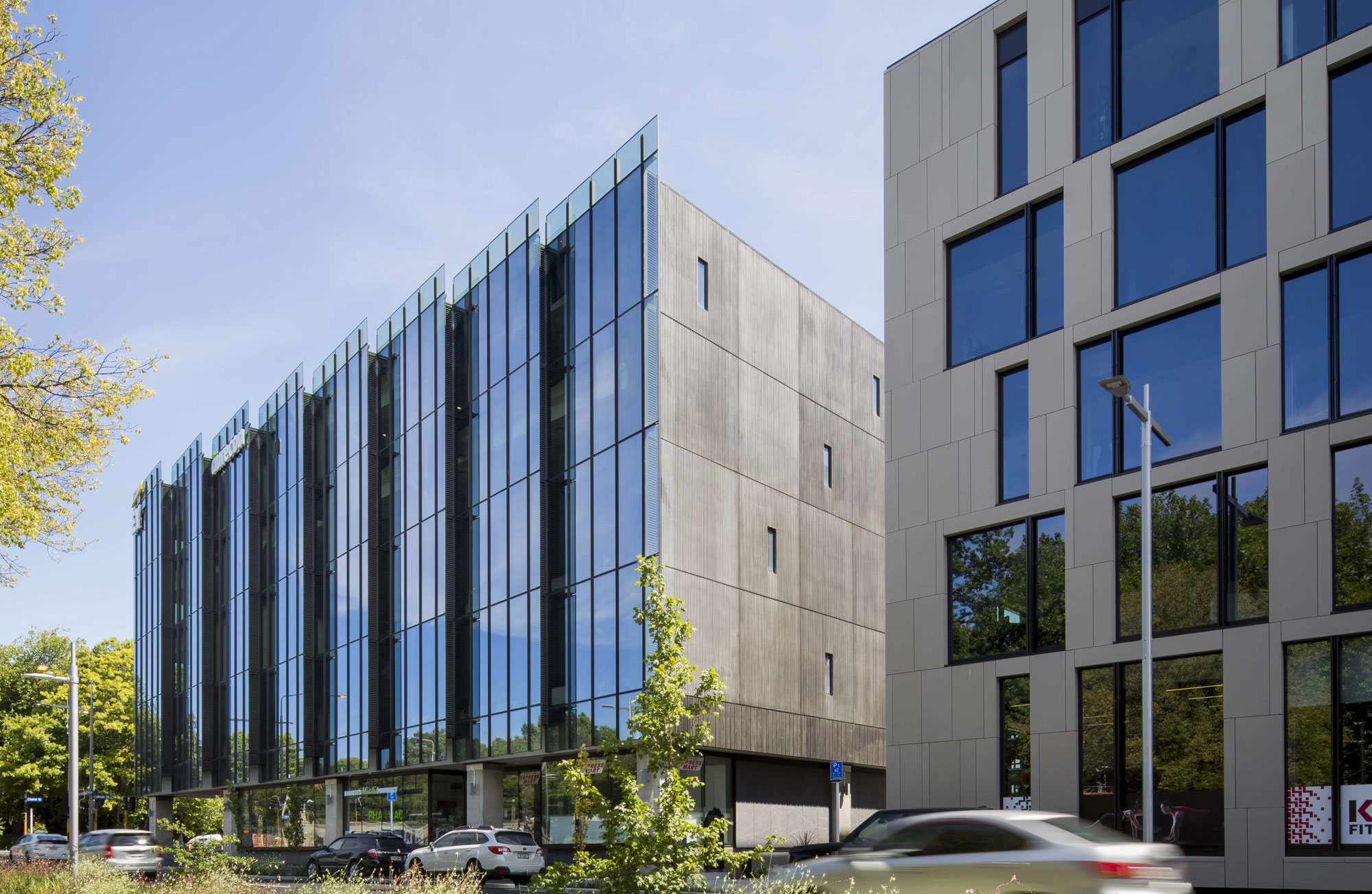 The Christchurch riverside site where the King Edward Barracks were once located has a long and rich history of habitation and use, making the site an area of cultural significance. The development consists of commercial, residential and parking buildings arranged to frame urban spaces.

The design of the landscape and buildings express and celebrate the strong cultural and historical bond of Ngāi Tahu (the principal Māori iwi or people of New Zealand’s southern region) to the site, and the subsequent use by Europeans.

The gardens and open urban spaces on the site are intended to be public spaces with a strong pedestrian focus. The central garden in particular is intended to be a ‘people place’, ensuring an area for safe pedestrian movement and space for informal gathering.

Up to 1500 workers will eventually occupy the site, including 350 public servants. With four commercial buildings, walkways, a car park building and row of apartments, the development takes up the entire riverside block.

To reduce capital costs for Ngāi Tahu, simple low energy strategies of form, fabric and orientation were augmented by a centralised servicing strategy. These include central plant with ground source aquifer heating and shared reticulation. 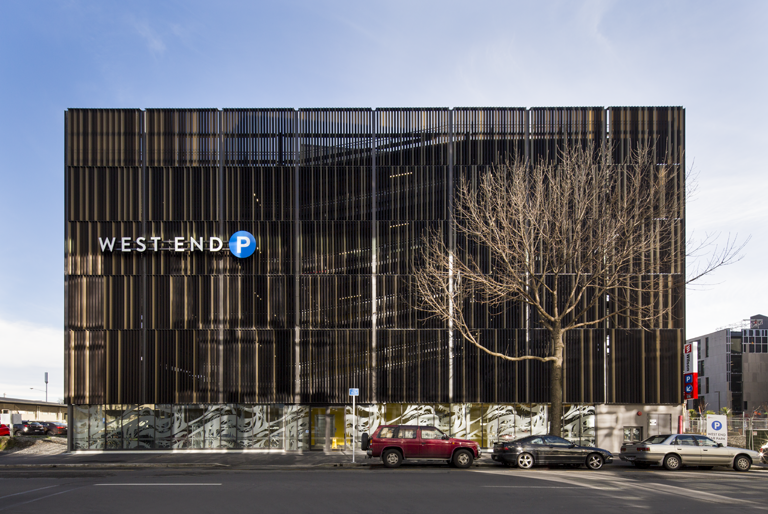 The brief from Ngāi Tahu Property required the development to reflect the values of Ngāi Tahu and to record the varied Ngāi Tahu and European history of the site. Phase One of the $85 million development has two office buildings of 6500 square metres and 7500 square metres, and a 20,000-square metre gross floor area multistorey car park. The proposed Phase Two will include two more office buildings and Phase Three comprises 70 apartments; however, these still require further design and are subject to testing of market demand. Unusually for a commercial development, the whole site will enclose an urban park, to be known as Ngā Māra a Te Wera (The Gardens of Te Wera).

The site, bordering the Avon River, is of significant cultural and historical value. Ngāi Tahu is the current owner of the site and has occupied this important mahinga kai (food and resource) area for centuries. It was also the location of the old King Edward Barracks, where soldiers trained and left for duty in both World Wars. Since the 1930s there have been two police headquarters on the site, the most recent of which imploded after the earthquakes. 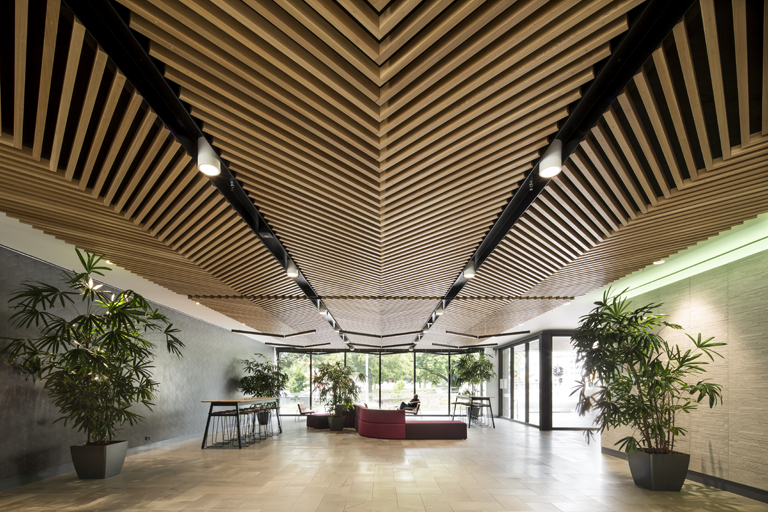 The development has adopted the latest earthquake technology. One building is base isolated, while the other has a buckling restrained bracing system. Both Phase One buildings will have photovoltaic panels on their roofs to generate power for the complex. Both buildings are Green Star rated, as well as holding NABERSNZ energy ratings. This energy rating system is based on an Australian environmental and energy rating system. The car park includes state-of-the-art parking for bicycles and charging facilities for electric vehicles, licence plate recognition and red/green way finding and parking technology.

Gordon Craig, senior development manager for Ngāi Tahu Property, says the iwi is proud of the development and its contribution to the ‘new’ Christchurch. “We wanted to create a place for people and a people place. We want the public, not just the tenants, to come into the site, and to contemplate the buildings and the place.” 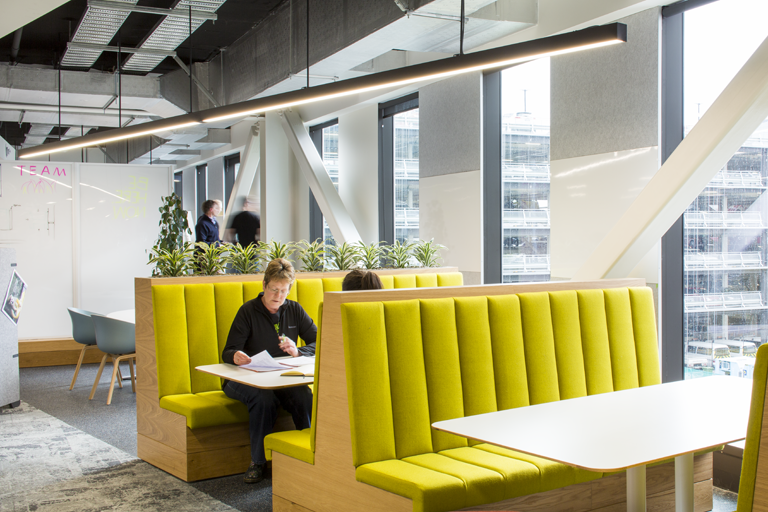 How was Warren and Mahoney chosen for the project?

Warren and Mahoney have had a close working relationship with Ngai Tahu Property for almost a decade. Ngai Tahu are the largest Maori iwi in the South Island of New Zealand. Warren and Mahoney originally won the opportunity to work on the King Edward Barracks site through a limited design competition.

What were your greatest challenges with this project?

Working with Ngai Tahu Property required the careful balancing of their commercial goals with their cultural aims for the project. In particular Ngai Tahu Property bring an intergenerational perspective in terms of the environmental impact and the cultural and social potential of their projects. This unique perspective led to a masterplan that is perhaps more considerate than a normal commercial development might be.

The project weaves into the design representation of the Ngai Tahu story; the planning responds to the cultural context, while the masterplan creates two new substantial public urban spaces for the city. 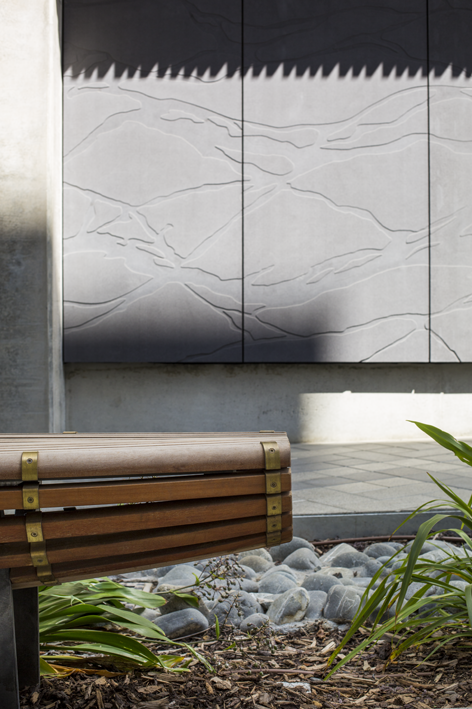 All this is achieved within a strong and holistic sustainable design solution that includes not only the normal low energy, water efficient and material strategies we would expect of a quality NZGBC (New Zealand Green Building Council) Greenstar certified project, but also a district heating and cooling system, geothermal energy and two significant PV arrays.

Both office buildings have been certified under Greenstar under the Design rating tool and are currently being assessed under the Built rating tool.

How did it differ from other recent Warren and Mahoney projects?

Rather than being different, the buildings demonstrate a number of themes that have become a key focus of the Warren and Mahoney team: those of cultural identity, urban responsibility and sustainability. As designers, we operate within a local environmental and cultural context and it is important we respect that identity and strive to create solutions that are responsible and responsive both socially and environmentally.

The project has been a long time in the making. Warren and Mahoney were originally commissioned prior to the earthquake; however, due to the impact of that the project had to be substantially reimagined. Once the city rebuild was truly underway, the master planning was completed and the building design and construction of the first three buildings were completed within a relatively short time-frame of two and a half years.

The material palette comprises glass, aluminium and terracotta panelling cladding with natural basalt stone and concrete on the ground plane. The inclusion of a serrated terracotta panel provides a depth of colour and texture that provide visual variation over the day.

Ngai Tahu Property has its own property development division and was heavily involved in project from inception to completion. The project was, and still is, very much a team effort.

One interesting and challenging aspect of the design was the structural design. This was obviously a keen focus of all designers, developers and tenants after the earthquake and innovative resilient structural design solutions have been a trademark of the rebuild. While all three buildings are designed to be stronger than required under the building code, different approaches have been taken on each building.

The car park has been designed with a focus on absolute simplicity and symmetry of structure – asymmetry having been a major cause of failure in the earthquake. Both office buildings have been designed with resilient steel structural frames to allow movement in an earthquake to absorb the initial forces. Typically, this appears in the form of friction joints and diagonal braces to absorb the forces and be able to inspected and easily replaced if damaged.

In addition to this, the building tenanted by Aurecon has been designed to be functional immediately after a major earthquake. This involved a much more complex strategy that included not only base isolation at first floor level (essentially shock absorbers for buildings) but strategies to ensure continuity of services such as electricity, communications, water and waste

What was your main inspiration for the design?

Our main inspiration for the design was the aspiration established in the original public consultation carried out by the city council after the earthquake and Christchurch City Blueprint: that of a sustainable, vibrant and pedestrian friendly city.

The design adopts a courtyard model to break up the large impenetrable city blocks that formerly covered the city. Additionally, Ngai Tahu Property decided early in the master planning process that it wanted to create a large garden area, rather than build to capacity on the site.

The courtyard design reduces the city to a more human rather than vehicle dominated scale creating enticing routes through the site, as well as spaces that are open to the sun, but importantly are protected from the prevailing easterly winds.

This approach is not purely philanthropic as it provides a number of other more commercial benefits. It effectively doubled the commercial (retail) frontage of the buildings at street level, created an attractive amenity for tenants, and [provided] excellent daylight and outlook for the offices above.

Now the project is finished, what elements do you love most and why?

The courtyard space, which will be an important public space for many years to come. Working in the post earthquake rebuild has perhaps given us a unique understanding of what is truly important. Buildings, façades and tenants are all transitory; however, the public space has given something to the people of the city that, once loved, is unlikely to ever be taken away.

There have been no issues of substance and we are currently working with Ngai Tahu Property on the next stage of the project, comprising two smaller office buildings and a managed apartment block or possible hotel facility.

This article originally appeared in AR154– available online and digitally through Zinio.