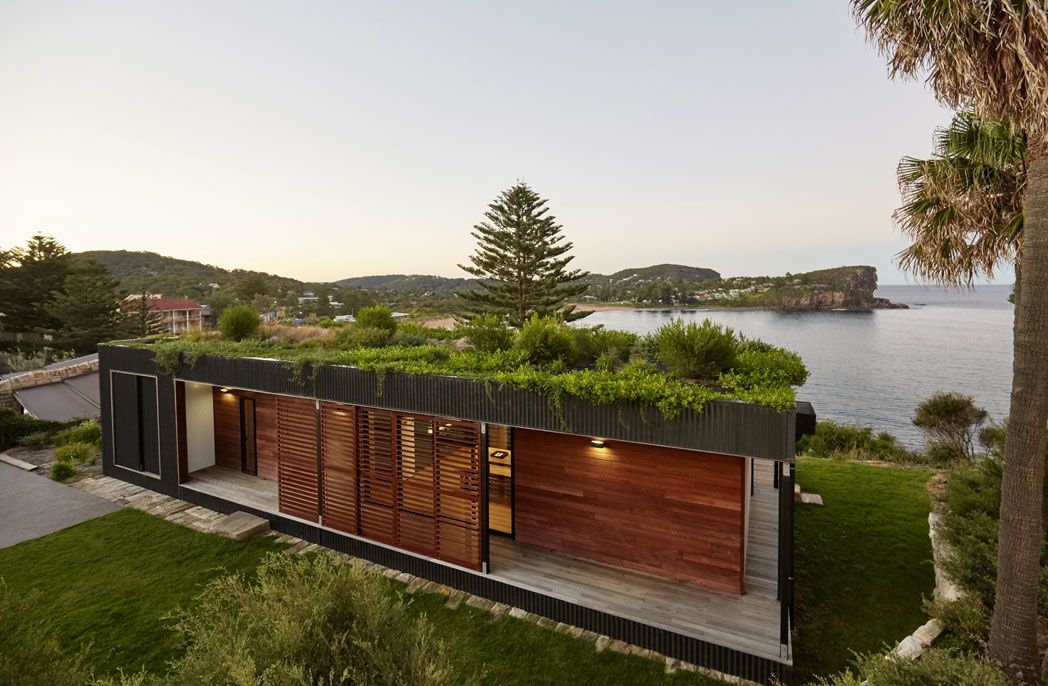 Ella Cole surveys three studios that are letting nature take over. The results benefit the biodiversity of our cities just as much as the humans who reside in them.

Bordered by narrow streets and bluestone laneways, the inner city courtyard has long been a mainstay of metropolitan Australia. These often underutilised sanctuaries provide a small but necessary outdoor extension to our urban landscape. But take a walk around the inner suburbs of our cities and you’ll notice the humble courtyard no longer typifies the smallest of outdoor urban spaces.

“If every city dweller introduced more plants into their outdoor spaces, the positive impact on local biodiversity would be profound.” – Carolynn Brooks, The Small Garden

Multi-level apartment blocks pepper the skyline, ostensibly growing from the rubble of former single dwellings, shopfronts and industrial lots. Small balconies protrude from equally small apartments and it now seems that, whatever the size of the block, the dwelling covers most of its developable area. In fact, in 2015 a report by former City of Melbourne planner, Leanne Hodyl, revealed that high-rise apartments are being built in Melbourne at four times the maximum densities allowed in major cities like New York, Hong Kong and Tokyo.

While a low-maintenance block sounds appealing to many, there’s no denying that this can pose serious biodiversity issues for our cities. The vegetation that surrounds our homes plays an important role in the microclimate, stormwater drainage and biodiversity. Plus, given the increase in high-density housing in recent years, it’s more important than ever to incorporate sustainability and biodiversity objectives into even the smallest spaces.

Carolynn Brooks, one half of the aptly named garden design and construct duo The Small Garden, says there are plenty of ways we can use greenery to enhance the sustainability of our homes, no matter how small the outdoor area. “If every city dweller introduced more plants into their outdoor spaces, the positive impact on local biodiversity would be profound,” she says.

Brooks often meets with people who are concerned about the environment and want to learn what they can do to curtail their impact. “The key thing to remember is that starting small is OK,” she says.

“As urban areas become increasingly built up, natural shade solutions from plants are helping to alleviate the urban heat island effect.” This is the phenomenon that occurs when urban areas become significantly warmer than rural areas as a result of our unceasing modification of land surfaces. Put simply, as a metropolitan area expands, its average temperature increases.

There are ways to reduce heat produced by manmade surfaces, according to Brooks. These include “installing vertical gardens, planting climbers to cover structures and walls, and using floor and wall treatments that will either deflect or absorb heat,” Brooks explains. “Even in spaces like balconies, the presence of flowering plants will help to sustain local bee populations.”

ArchiBlox’s Christine McCorkell also sees small outdoor spaces as a way of enhancing our relationship with the natural environment. She says, “Utilising small urban outdoor spaces such as rooftops to create interactive zones not only helps reduce the urban heat island effect but also adds considerably to the energy savings of the building itself.”

The team at the Melbourne-based architecture practice consider sustainability in every facet of their work, and McCorkell says that creating and delivering sustainable spaces works best with a team devoted to reducing human impact on the environment. “Collaborating with like-minded people helps create not only beautiful and healthy buildings, but a sanctuary in the hustle and bustle of everyday life,” she says.

Situated on a sloping site, ArchiBlox’s Avalon Beach house project is a small footprint home that was outfitted with a number of green features, including a living roof that minimises rainwater run-off. “This not only adds more greenery to the surroundings, but also attracts birds, bees and animals,” McCorkell says. “Being visually connected to nature enables us to feel ‘at one’ with nature.”

As McCorkell explains, green roofs increase acoustic performance among other benefits. “From a design perspective, providing a green roof enhances the thermal performance of the building while saving energy.” She says this helps the greater environment by providing improved air quality and reduced urban temperatures.

But small space design can be difficult, says Trystan Graham, director of Sydney’s Outdoor Establishments. “People often get so caught up with trying to maximise space that they end up with nothing more than a new tiled area,” he says, “and the issues that can arise from this approach can be drastic.” Graham agrees that collaborating with like-minded people is important when it comes to achieving sustainability objectives. “The free exchange of ideas and trading of expert knowledge with other disciplines is what allows us to create landscapes that we, and our clients, are truly proud of,” he says. Graham says well-planned garden design and introducing greenery into urban areas helps to minimise negative environmental impacts and ensures that even small spaces can be comfortable and inviting.

This was the case with Outdoor’s recent courtyard project in Woolloomooloo, where it needed to create a space that recognised the client’s need for a versatile outdoor living area, notwithstanding its small footprint. “Storage and car parking were essential, as well as an entertainment area that would essentially extend the home out into the garden.” He says introducing as many plants as possible was pivotal in softening the harsh inner city setting.

It took a similar approach with its Chatswood rooftop project, a space that highlights just how possible it is to create a functional, sustainable garden even in the most rigid of settings. Despite being exposed to the elements at 28 floors above street level, the rooftop showcases the importance of injecting plant life into high-density areas, even in the most unforgiving of environments.

There’s no doubt our cities are now more dependent on high-density living, and the focus on small, low-maintenance spaces illustrates how Australian lifestyles are evolving. It’s more important than ever to incorporate sustainability and biodiversity objectives into even the smallest spaces.

This article originally appeared in MEZZANINE #8: The Special Issue. Get your subscription to MEZZANINE here – or digitally through Zinio.

Want more greenery? We take a look at the growing area of residential greenwalls.

Innate + In Tandem by Shaw Contract