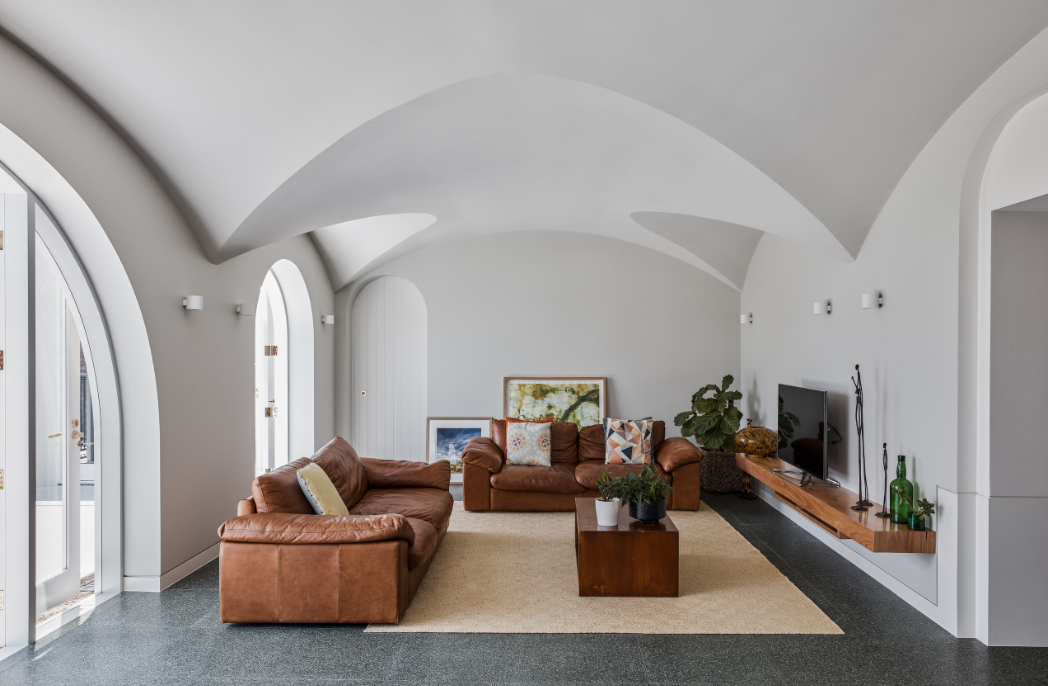 Uncovering a layered history inside a Brisbane brick house

The latest residential project from Marc&Co is a home that has been renovated with care and a design concept executed with expertise.

In a subtropical city like Brisbane, the historic housing of which is defined by its timber construction traditions, it is a rare and welcomed challenge for architects to tackle a house made of bricks.

Architect Angus Munro, director, Marc&Co, uncovered a layered history inside this masonry dwelling and a plethora of piecemeal additions accumulated during a lifetime of service as a home for a priest.

As superfluous layers inside the historic rooms were removed, the contemporary interior emerged as a series of interventions informed by the archetypal orders, materials and ornamentation found in the original. 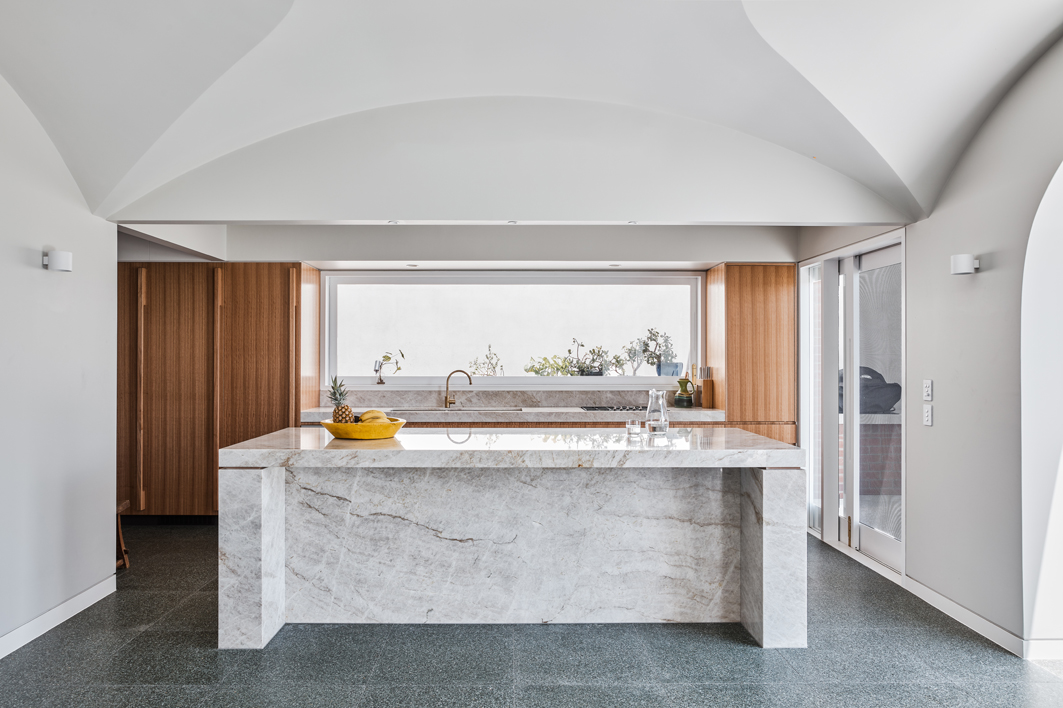 From the front gate, the elevational composition of the house can be abstracted as a series of elemental forms. Blonde bricks, curving to form the arched openings of windows, stand out in contrast to those in ochre, laid-in stretcher bond across the façade. White rendered columns, supporting the portico roof, reference another traditional architectural order. As the front door swings open, the domed ceiling of the entry vestibule is revealed and the lyrical language of curves and arches reverberates inside.

Before additional program was introduced here, all rooms were arranged on the primary upper floor. But in order to accommodate the new owners, more floor area was sought. With the sloping site, the building’s undercroft offered up the obvious place to introduce new social spaces – kitchen, dining and living rooms. An extension at the side of the house accommodated both carport as well as additional space for a bedroom and bathroom above. 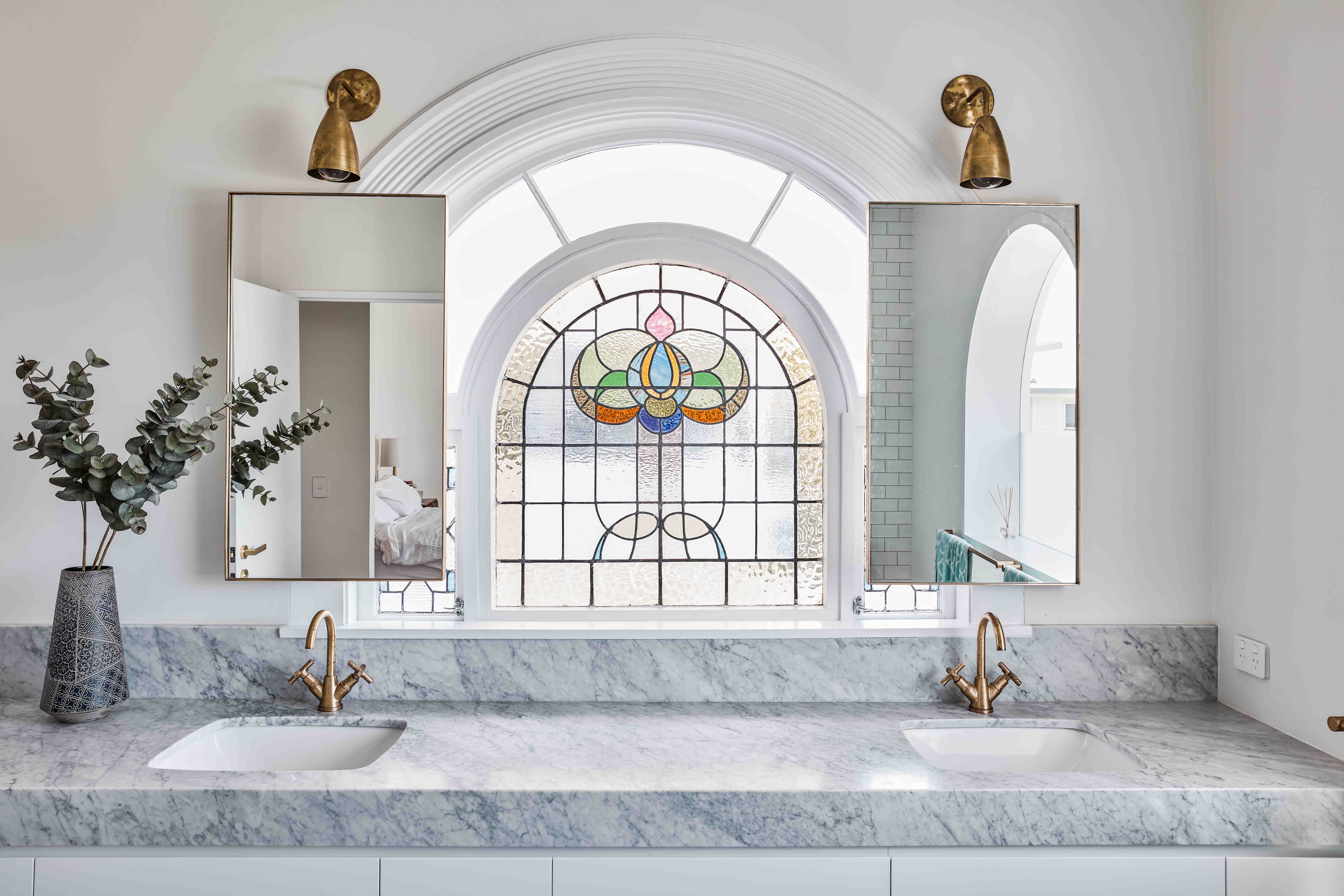 This two-storey strategy had the dual benefit of bringing sleeping chambers together on the upper floor, while grounding family rooms in the landscape below and allowing these to open directly onto the north-facing lawn.

The client’s retreat, including bedroom, en suite and robe, occupies the longest stretch of the northern edge upstairs. The ordering of spaces is directed by the façade, with the en suite positioned to coincide with a narrow arched window and the bedroom centred behind twin French doors. The bedroom’s inner corners are gently curved, as is the pelmet that frames the billowing curtain and neatly defines this interstitial space.

A calming ambience descends on the room largely due to the consideration for corners and the softness that exudes both visually and acoustically as a result. The staircase descends on an axis with the front door, its gently curved corners smoothing out the dogleg journey and echoing the forms in the ceiling above – both the dome and rounded-square relief encircling it. Open timber treads illuminate the descending volume and allow glimpses of light and sound to filter upstairs, from the hubbub below. 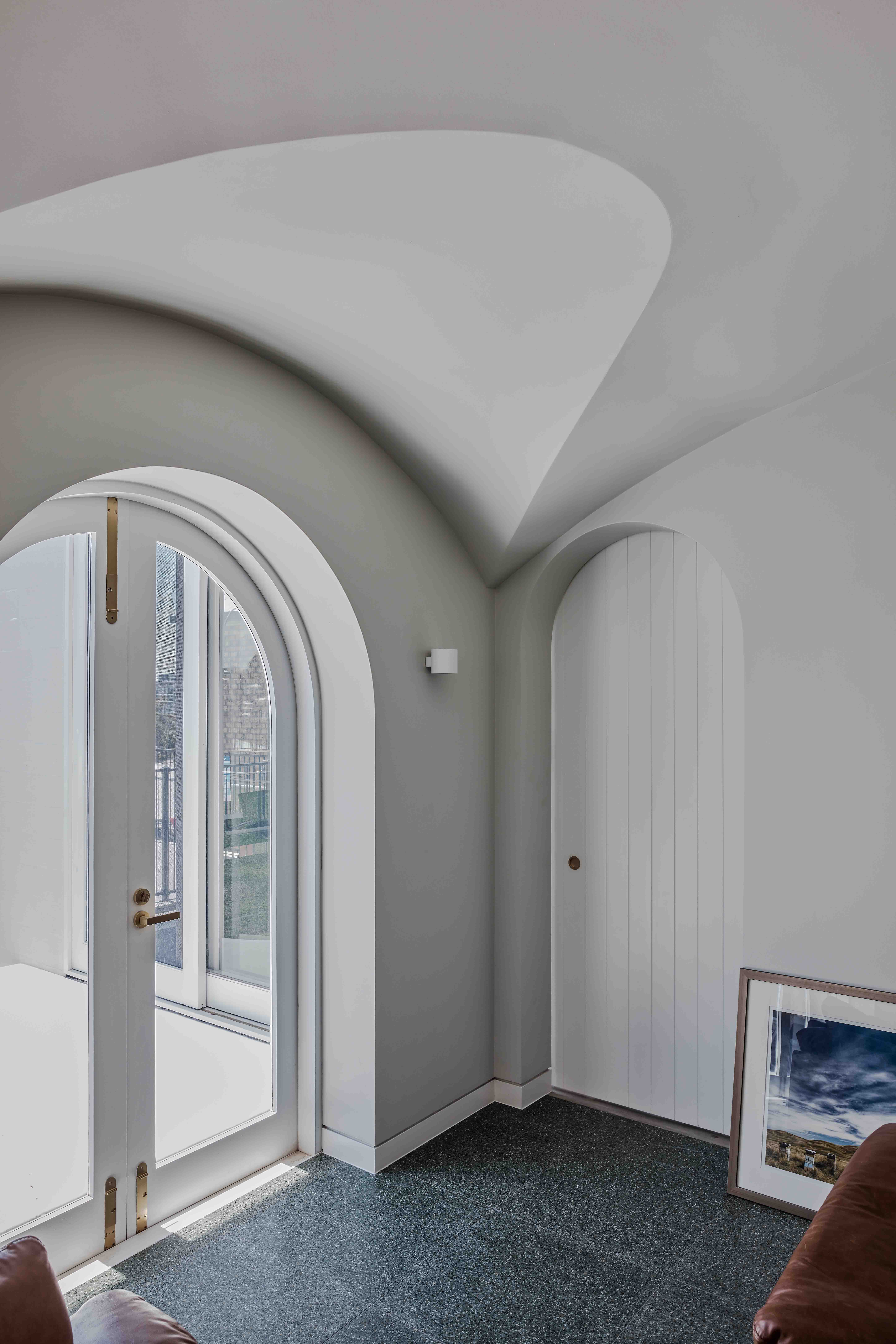 At the lower landing, carport and guest rooms are accessible before a third half-flight completes the journey to the ground floor. The long, singular space comprising kitchen, dining and living room feels both intimate and animated. Smaller rooms are defined within the larger space courtesy of the gentle curves of the impressive vaulted ceiling above.

“The geometry of the curves are extrusions of the shapes on the outside,” Munroe says. “It’s generated from the existing form [of brick arches].” Three arched openings metaphorically push through to the interior, forming corresponding curves that are intersected at 90 degrees by a larger vault running the length of the room. 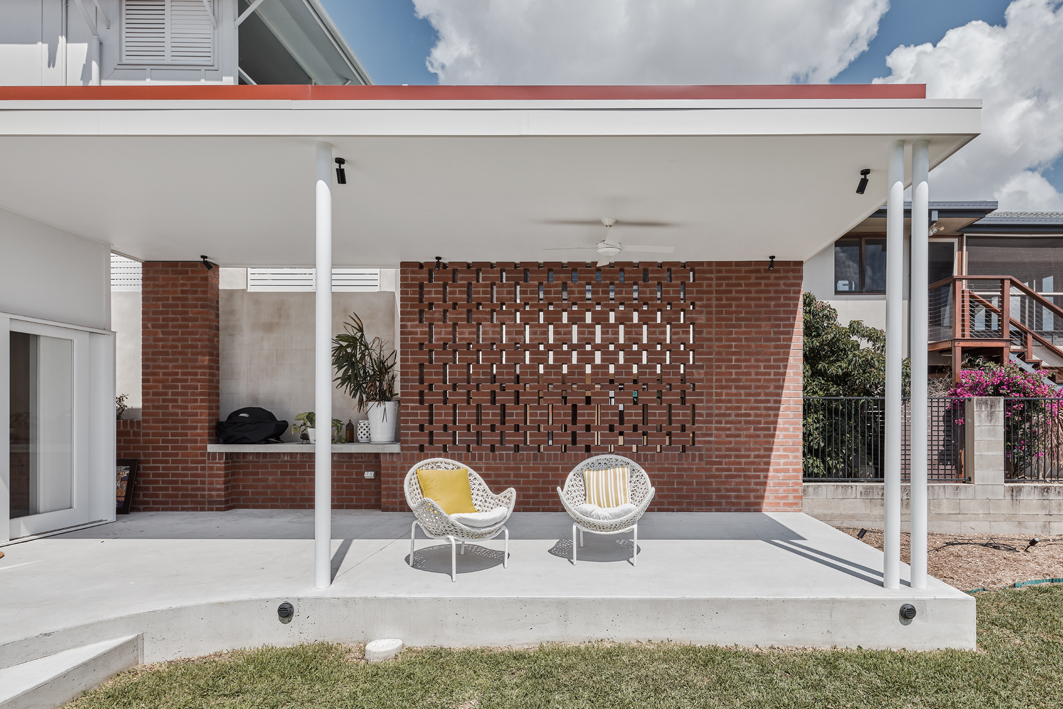 The double curvature of the ceiling and the resulting light-play creates an array of compelling visual illusions. Terrazzo floor tiles and stone bench tops in Quartzite strengthen the cavernous quality of the space that appears carved from the hillside. Golden and green veins in the kitchen bench top echo the emerald-coloured floor, complementing the earthy tones that appear elsewhere in the form of timber joinery and tan leather furniture. 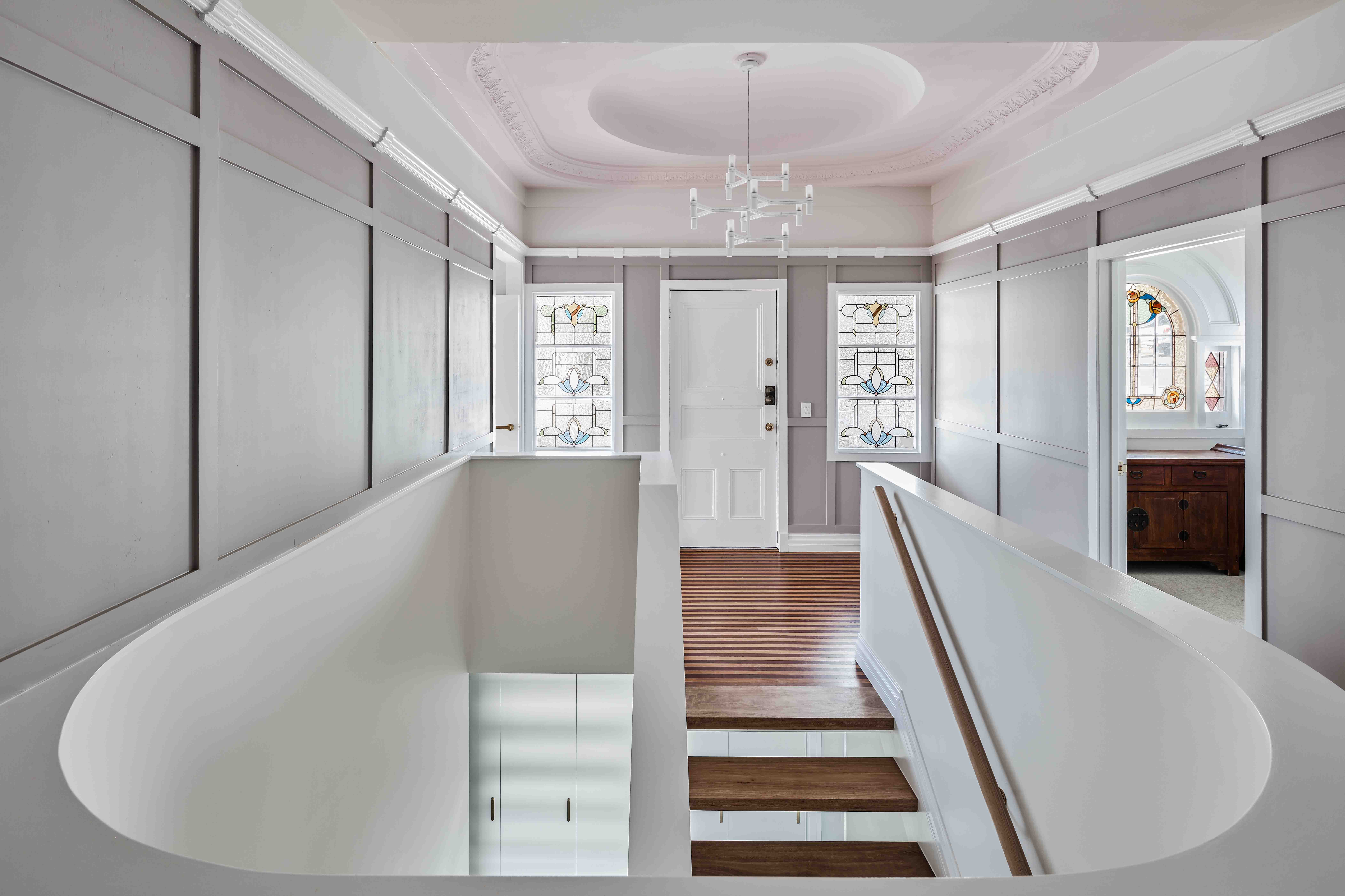 Bringing the space to life is the uplifting light quality, which filters through the large arched openings and kitchen splashback window. At nightfall, artificial lighting accentuates the sweeping curves of the ceiling. The client says, “The room is quite cosy and moody at night, but during the day it feels really refreshing,” and, “It takes on an entirely different character [depending on the time of day].”

There is a pleasing visual and sensory cohesiveness achieved in the interior, which comes through the simple but powerful logic of repetition. Curved and circular motifs, which appear as planar interventions, as well as three-dimensional forms, deliver visual interest but, more importantly, hold rooms together, delivering a calmness and comfort. The commitment of Munroe and his design team to pursue this idea is best described in the design of the rumpus room ceiling. 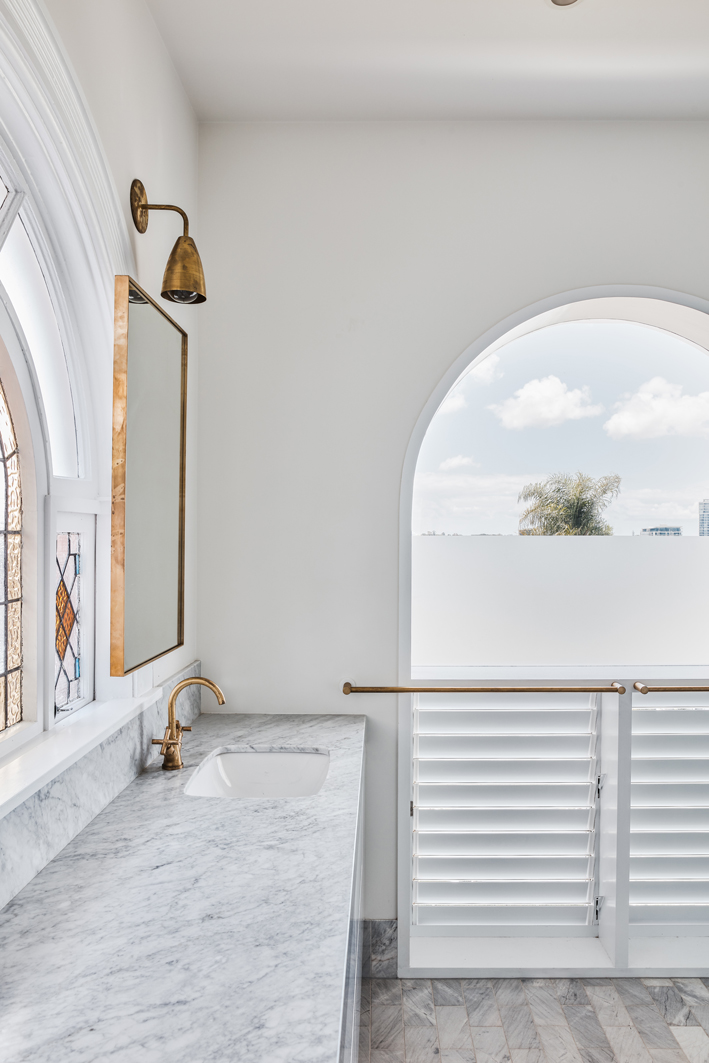 Scattered across its surface is a random pattern of miniature domes, made by fixing a series of half-spheres into the concrete formwork before it was poured. The results of this delightful experiment speak volumes of the work, which is both playful and purposeful.