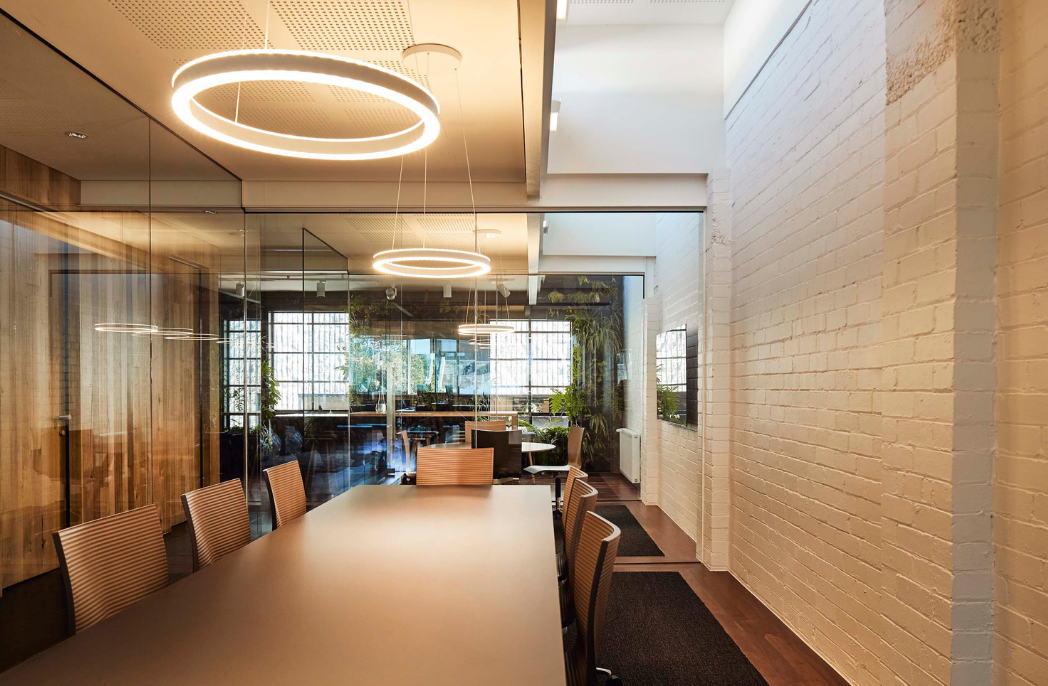 Conceptually framed around the idea of a campfire, the new Melbourne office for k20 Architecture is very much about the collective intelligence.

Ostensibly at its design end, the building was cold in winter, hot in summer and while “cool with really good bones” as k20 principal Theodore Kerlidis states, generally feeling its age. That said, this is the sort of challenge that places k20 at its best, with a driving belief that the life of a building can be extended through the re-forming of architecture.

It is important to make the distinction between re-forming and reusing in that re-forming allows a higher degree of selectivity, while the legacy of reuse can create areas of compromise. Reuse of windows, for example, can allow air leakage, while re-forming the architecture itself posits a better version of the same thing. 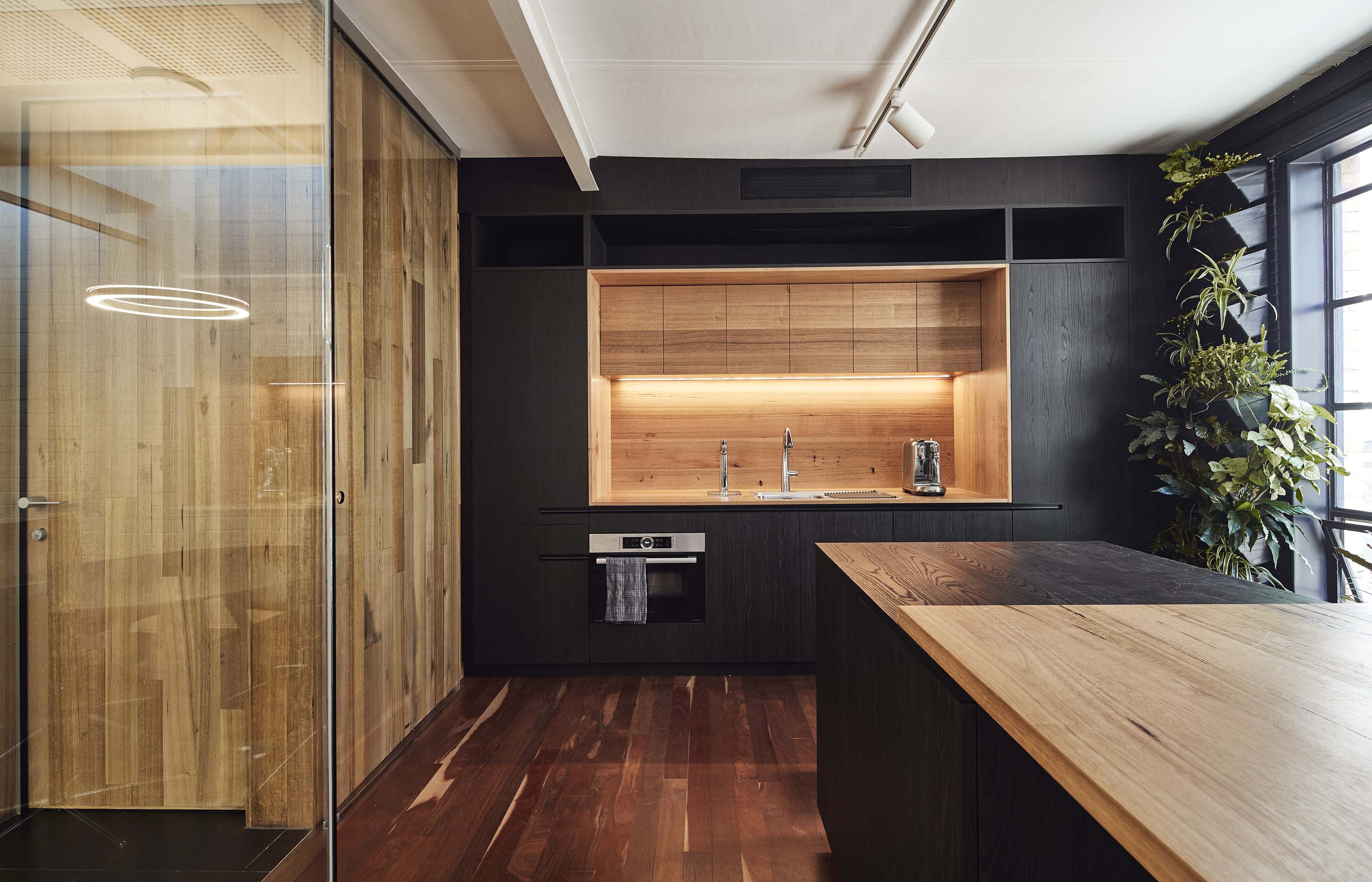 In this case, the building was taken back to the shell to expose bricks, concrete and staircase. “We like to identify what will allow us to re-form the building: strip it back to reveal its surface, its feel, its honesty; take away the layers of plaster, paint, lino and whatever separates us from the core,” says Kerlidis. Effectively, this allows for a low-tech incursion, where the potential and problems of the building can be squarely addressed.

To this end, the idea of ‘person’ is placed at the centre of the building experience, as the embodiment of ecology and sustainability. Thermal mass, for example, was existent, but so removed from the interior through layers of plasterboards and planning that it had ceased to function.

By removing the egregious layers, the thermal mass was effectively unlocked in that the limitations could be properly addressed and countered. “The previous cellular planning was bad (plasterboard and carpet – hot and cold). It didn’t function to give any sense of comfort. We owned the building, so we had heard all the complaints of tenants and knew that the building didn’t function. It’s the same building, but now it functions,” says Kerlidis. 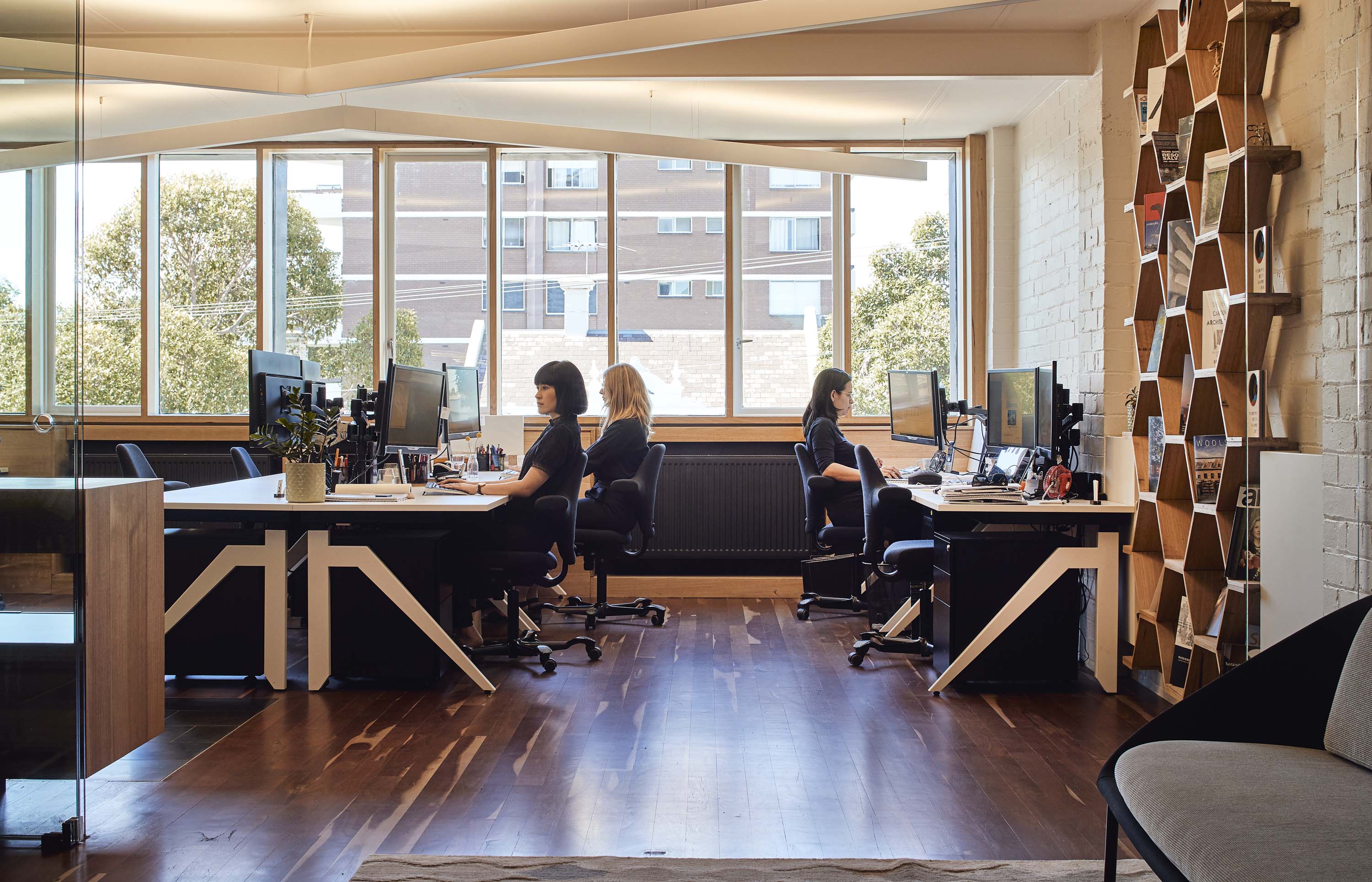 From an interiors perspective, the office takes shape without visible architectural incursion. Instead, it reads as a flowing singular whole. This is effectively an illusion with areas of opacity and materiality shaping the experience into a series of, in the parlance of Kerlidis, campfires. Stating that “it’s really painful to design for yourself” Kerlidis has addressed the design as a physical embodiment of how he designs, which is largely on the lounge.

“As architects our creative work doesn’t happen at the desk. That is simply a data entry point; the creativity happens around you as it does in a home.” As such, considerations for sit/stand workstations and the like were rejected in favour of a variety of communal tables, an open kitchen, lounge and an ersatz campfire for sitting around thinking, talking and spending the time needed to develop ideas. 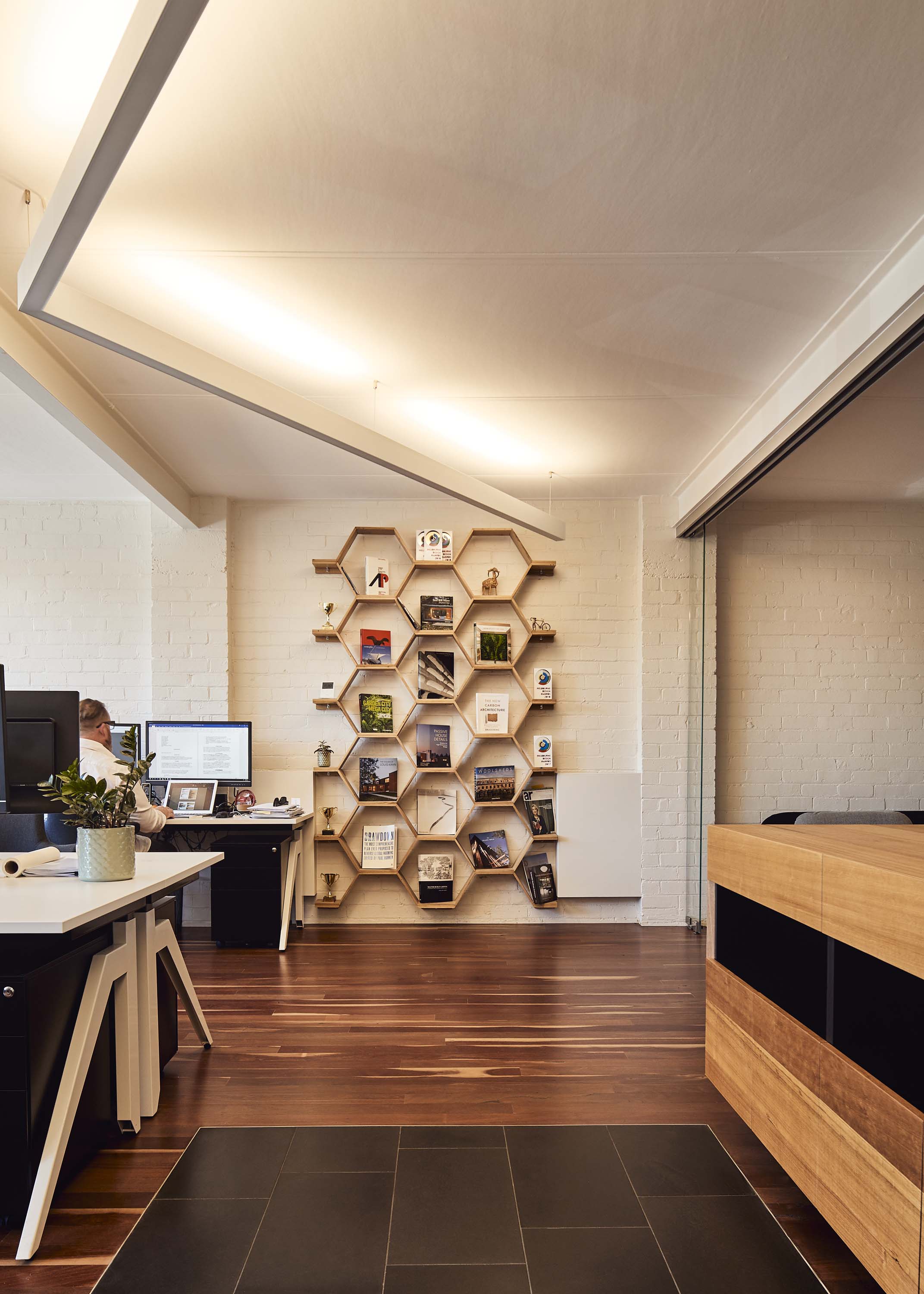 “We are all part of a collective intelligence; it is the conversations that happen around you that prompt the team to activate,” says Kerlidis.

Outlined by a locally made bespoke steel-framed glass door, the entrance is commensurate with the robust nature of the building. Similarly, the narrow entrance corridor has an honest appeal of raw materiality made warm by the inclusion of a wall of recycled messmate timber (Eucalyptus obliqua, Timber Revival). Having used the timber in his own home, Kerlidis was pleased to see another application.

Reclaimed from the demolition of the South Melbourne arts precinct theatre, this piece of history needed to be returned to South Melbourne. The below stair recess further recedes through being painted black, while a suspension system keeps bikes out of the way and largely out of sight. It is a neat and well-considered trick and very nicely done. The original staircase has been refinished and restored without flourish and this makes Kerlidis’ point of the architectural hand being unseen, in that, where nothing extra is needed, nothing has been added. The office proper spans out as an open plan expanse of recycled jarrah, finished with a water- based sealer that will require no maintenance. 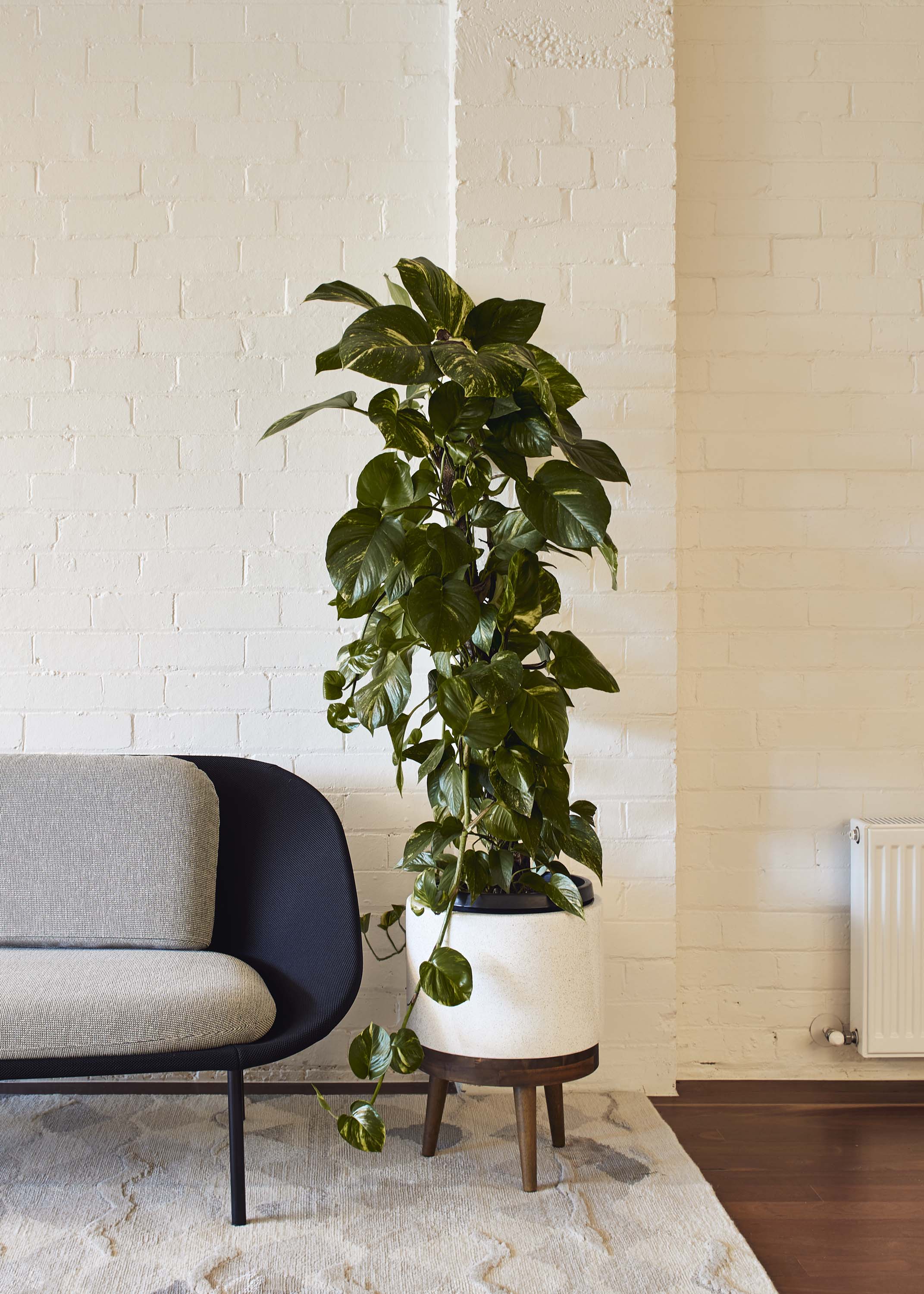 Large X-shaped ceiling lights (Linear LED Profiles, Laser Lighting) project light upwards and are typically Australian made. Kerlidis aims to achieve a minimum of eighty percent Australian content for his projects. The two main meeting points are, on the one hand, a rustic timber bench or recycled hardwood (Timber Revival) with Georg stools (Skagerak, Interstudio) somewhat like a large kitchen bench and, on the other, the formal slim black expanse of Arki (Pedrali) paired with Erik Magnussen designed Charik chairs (Engelbrechts). “The majority of our meetings happen in a camp style or informal manner that allows connectivity. 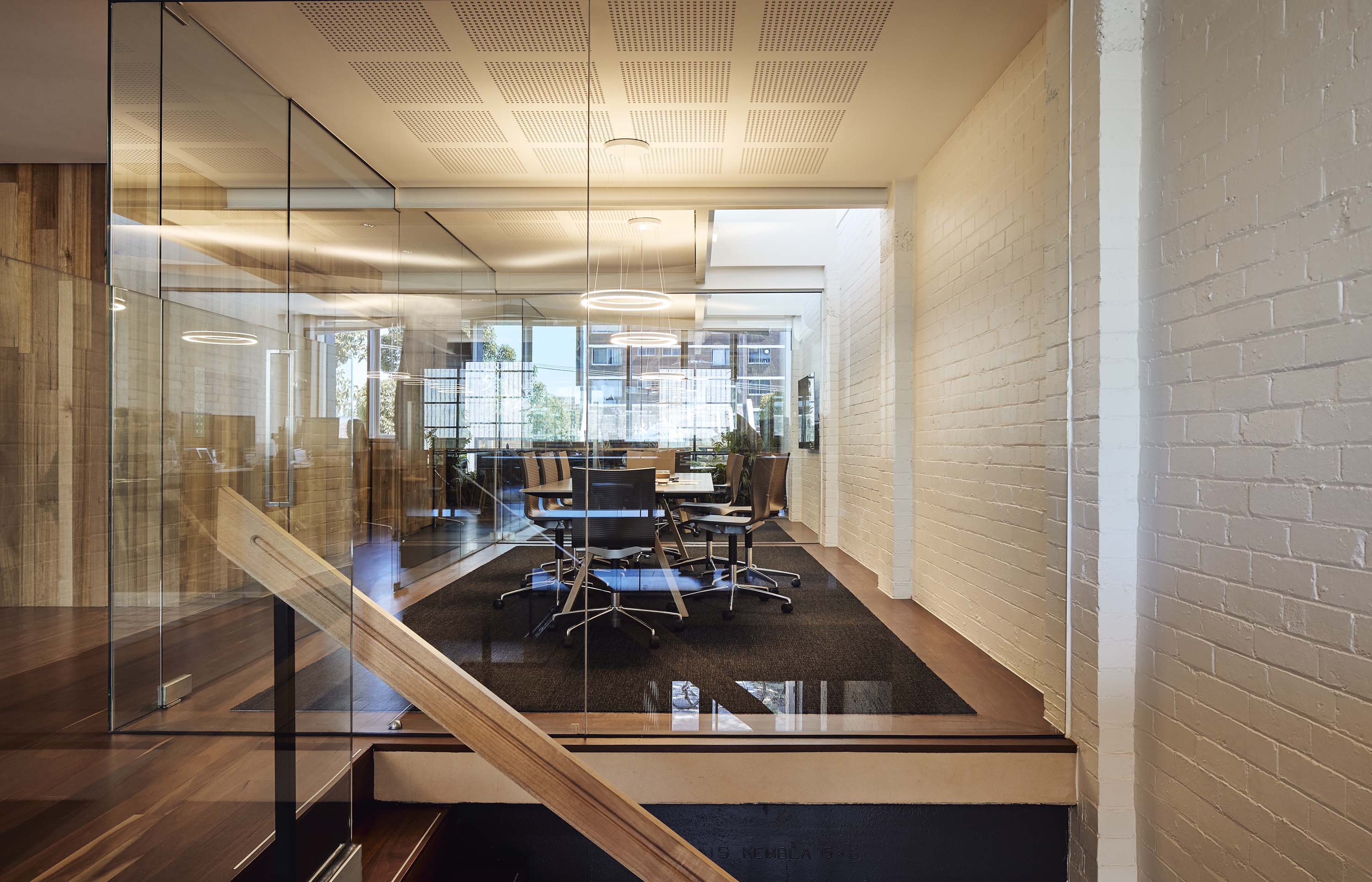 But there also needs to be some sense of formality to not lose sight of the importance of the work being done,” says Kerlidis. As the office was merging a practice that had grown to occupy two separate spaces, the aim was to create a home for the entire staff and clients with comfort options for all. “The concept of place is a first home. There is a lot of change when moving an office from two locations to one, and I wanted to create a culture of connectivity instigated by the change,” he says. 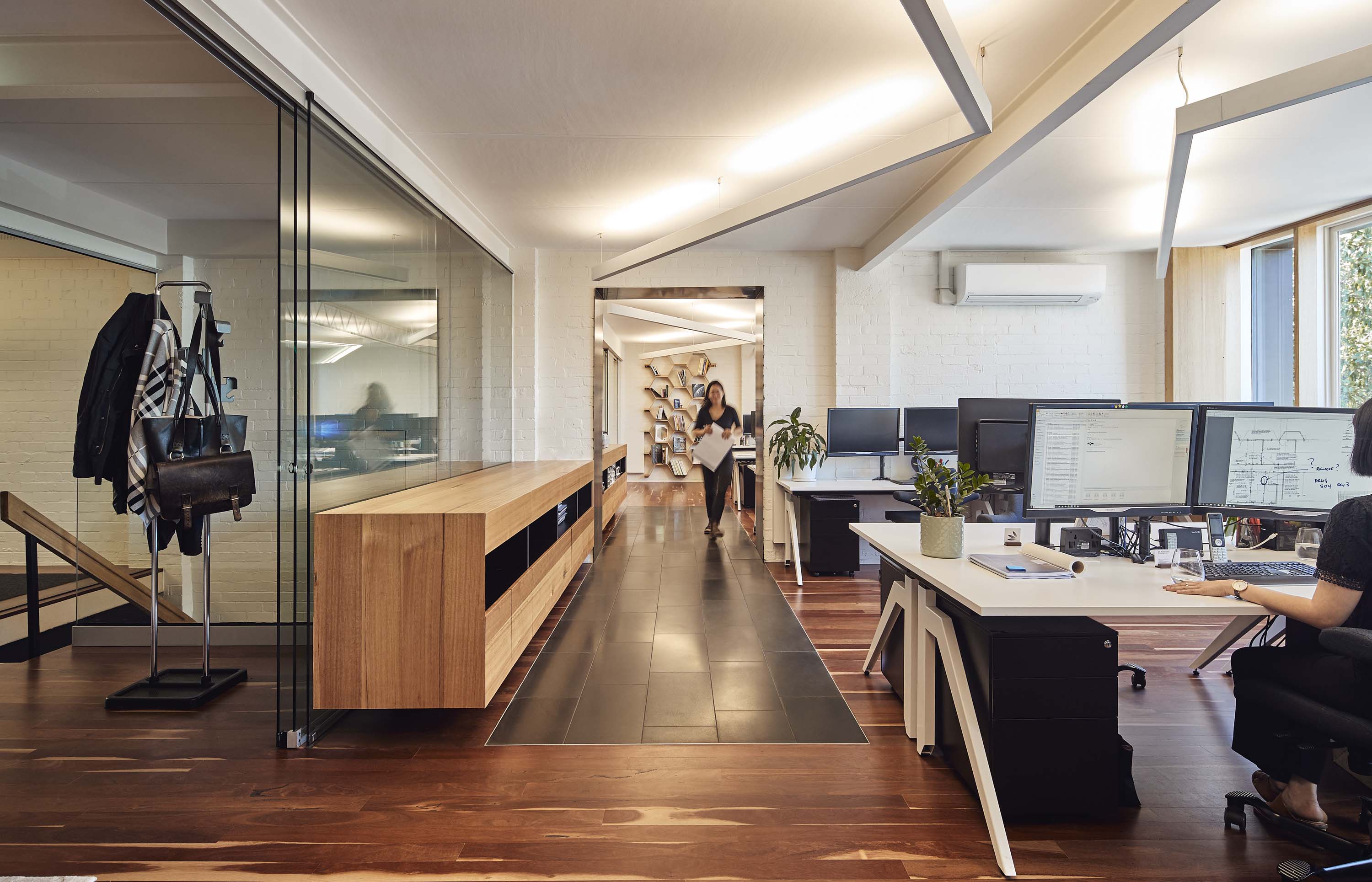 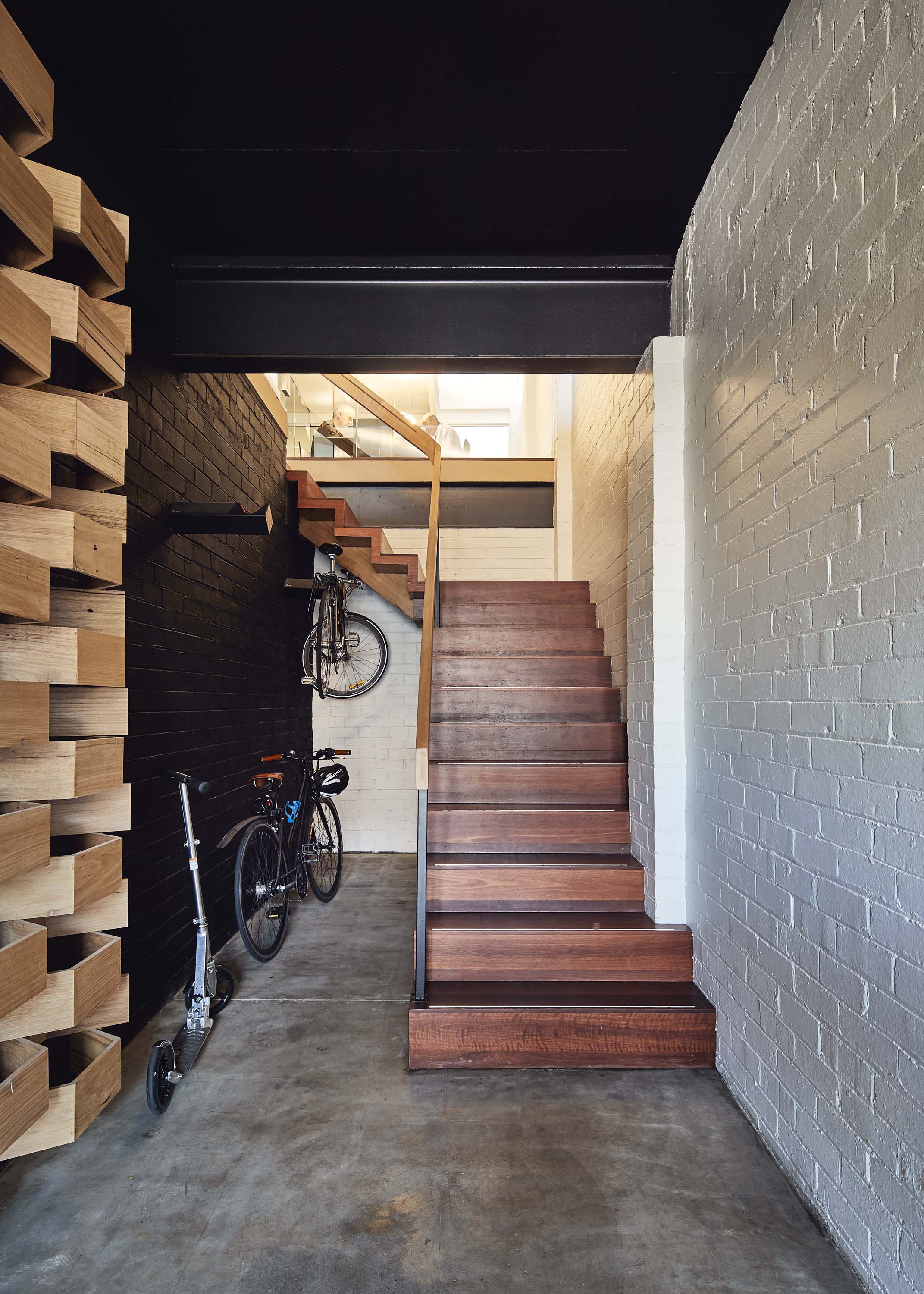 That is, the open plan nature of the design does not create the architectural output, but rather it is the program and practice that is activated by the safe environment of the thinking space. More simply, it is the dream woven from a conversation around a campfire.