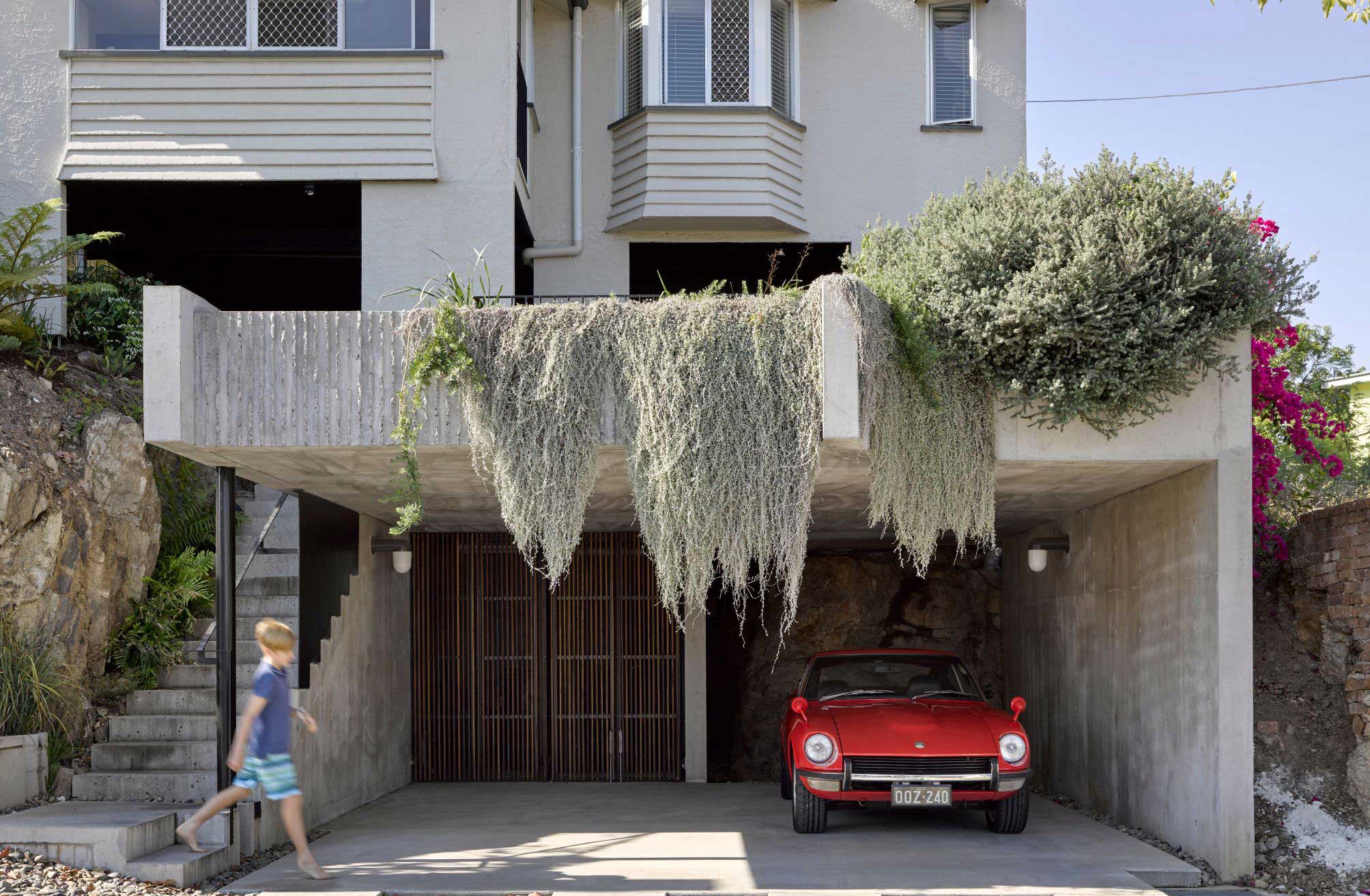 Employing the medium of landscape as the means to define a string of functional and poetic family-orientated spaces, Kieron Gait Architects and Dan Young Landscape’s Whynot Street pool and carport is so much more than what it says on the tin.

Brisbane sits in a climatic sweet spot of subtropical warmth, which, for nine months of the year, encourages a life lived outdoors.

For architect Kieron Gait and landscape architect Dan Young, the brief for this early 20th century home in the inner suburb of West End was to create something that encouraged owners Tony and Megan to step out their front door a little more often.

The project started with the rather modest ambition for a new sewer line, carport, pool and front door. Gait and Young recognised there could be a more poetic way to fulfil a list of functional requirements.

“The idea was to create a journey through the landscape that was about coming up through the gulley into the grotto and fernery and then moving through to the backyard, which formed a dry creek bed,” Gait says.

“We knew there would be rock under the house, so we thought we’d try and use that to build a series of spaces that guide you around the site and locate you in the surroundings.”

A new carport and swimming pool have become the anchors marking the start and end of this hilltop journey. Both carport and pool are born from acts of excavation.

Through this process, the characteristic language of the project finds expression in the raw and robust rocky surfaces juxtaposed against those poured and stacked with concrete.

With planting spontaneously erupting from rocky crevices and spilling over the concrete roof sheltering the carport, seasonal theatrics play out for the enjoyment of the street. With these contemporary additions the historic house becomes embedded in the distinctive rocky outcrop that defines this elevated pocket of the neighbourhood.

“We took care during the excavation process to find the natural seams in the rock to give the cutaways a more natural appearance,” Young says.

The pathway carved to make space for the concrete staircase appears like a natural escarpment, paving way for the fluid ascent from footpath to cottage undercroft. Both staircase and carport echo the monolithic qualities of the natural morphology, as if both were cast from the same rock.

“At first I wasn’t convinced that chiselling out the rock and planting ferns would really work, but the fernery has flourished, lots more have self-seeded, finding roots in the rock and populating the crevices,” Young says.

Ferns and maidenhair have thrived in the cool dark spaces, sheltered by the house and cradled by fissures made in the sheer rock face.

“You can imagine that before excavation it was a natural muddy slope,” Tony says. “Now, for the first time we can see and appreciate the hillside.”

The concrete roof terrace over the carport, which acts as both a garden and gathering space, marks the first hilltop vantage point.

“In winter we sit out here and soak up a few rays with a cup of coffee,” says Tony.

While private from the street, strong visual connections are drawn to the neighbourhood. City views can be enjoyed from here too, foregrounded by the rhythmic cadence of pyramid roofs the image of which is synonymous with the character suburbs of Brisbane.

In the backyard, the material and species palette plays to the informality of these, more private, spaces of recreation. The spoil from the front carport, delivered to the south-eastern corner of the site, emphasises a place of elevation from where long views unfurl, west to Taylor Range.

“Megan and I gravitate toward the top terrace with a glass of wine to watch the sunsets, which are pretty spectacular,” Tony says.

“In summer the kids are out here all the time. From first thing in the morning and again after they come home from school. Night swims are pretty popular too.”

The pool sinks into the lower, western side, held by boundary walls beautifully expressed in concrete block.

“The wall makes a strong datum, drawing connections between you and the landscape,” says Gait.

“You feel a connection to the broader landscape and you appreciate the shared landscape of other people’s backyards.”

The water body appears more akin to a billabong than a swimming pool. Planting spills to the edges, disguising and softening the line between earth and water. Adding to this the dark pool bottom recalls the naturally occurring waterholes that are found in abundance around this river city.

“Everything is about trying to make it look as though it was a natural occurrence,” Gait says. “It tries to echo the natural pools you would find at Mount Glorious.”

The decision to refrain from lawn and use pebbles allows the garden to adapt and change with the season with minimum maintenance and intervention.

Dichondra hibernates through winter, but, come summer, it takes over, spreading soft green leaves over the stony floor-like carpet.

A flame tree positioned centrally as a marker in the landscape also comes alive when the weather warms up, erupting with red blooms. And with the summer rain, the pool overflow spout brings drama and focus to the downpour.

The ‘enviro-swim’ pool system is low-grade potable – palatable for both flora and fauna.

“A lot of birds use it as a bird bath,” Tony says.

“We have resident crows. Before that it was magpies, but they fought each other and for now it’s the crows that have claimed the hilltop. We’ve also had bush turkeys, honeyeaters, parakeets, lorikeets, kookaburras and tawny frogmouths, even kingfishers.”

As with the wildlife and season, the place adapts to find equilibrium with the people and creatures that inhabit the hilltop, finding a happy place when in a natural state of flux.

The Whynot St Pool and Carport won the Garden or Landscape award at the 2019 Houses Awards.

The rise of Australiana in landscape architecture was one of the trends forecast for 2020, along with the pergola and water gardens.